You've earned some credits and experience in battles; now you can spend resources on upgrading your vehicles for greater combat performance. Learn what modules are; explore various ammunition, consumables and equipment, and don't forget about crew training! Finally, learn how to add new vehicles to your collection of combat machines.

Modules are essential basic elements of any vehicle.

The gun is the module that serves as a vehicle main armament, which is generally mounted on a turret or, if there is none, directly onto the hull. Gun characteristics define the overall firepower of the vehicle.

A track mechanism that determines traverse and movement speed, crossing capacity and load limit of the vehicle.

The module that sets the tracks into motion. Engine power determines the vehicle's acceleration and top speed. A direct hit can destroy the engine and set it on fire, which deals damage to the vehicle.

This module allows you to exchange information about spotted vehicles with your teammates. The greater the Signal Range of your radio, the better your ability to stay aware of enemy vehicles.

How to Research and Buy

You can upgrade modules on any regular vehicle except for most Tier X vehicles (e.g. IS-4 and Bat.-Châtillon 25 t can still be upgraded). Why is that essential?

You will need credits and experience to research new modules: 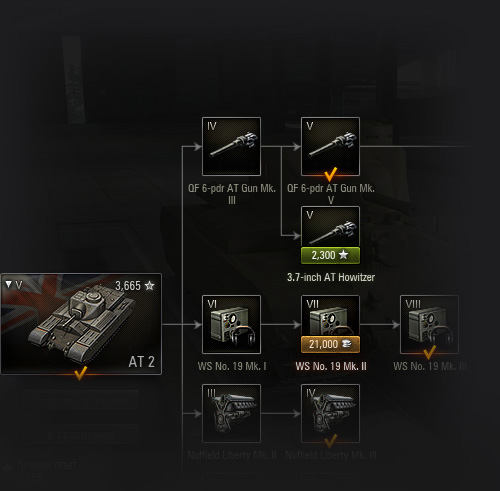 When you first enter the game, your Tier I vehicles are equipped with standard armor-piercing shells, but these are not the only shells that you can use. Explore all the shell types and learn their main features. Knowing when to switch between shells will bring you better results on the battlefield.

Armor-piercing (AP) shells are the standard type of shell for most vehicles in the game. They deal their damage when they penetrate armor or hit a module.

AP shells are generally suitable for firing at vehicles of the same tier or lower, and at vehicles with moderate armor protection.

Some vehicles can be equipped with premium AP shells with better penetration or higher damage.

High-Explosive (HE) shells generally have a low penetration potential. However, if they do manage to penetrate a vehicle's armor, they are likely to cause heavy destruction, including critical damage. If they fail to penetrate the armor, HE shells explode on the armor surface, dealing (at most) a small amount damage and having a chance of breaking a module.

Therefore, on the one hand, HE shells can be a good choice against thinly armored targets that they can actually penetrate: light tanks, open-topped tank destroyers, and the like. On the other hand, they may also be your best option against extremely heavily armored targets, because doing a small amount of damage and perhaps breaking a module is better than doing no damage at all.

Disadvantages of HE shells:

Some vehicles can carry premium HE shells with even greater splash damage. Some British guns can be equipped with special HESH shells with greater penetration.

Armor-Piercing Composite-Rigid (APCR) shells are the most common premium shell type in game. Their effect is similar to that of AP shells, but their speed and penetration are higher. However, their penetration drops off faster than that of AP shells at long ranges. And, like AP shells, they can ricochet if they hit an armor plate at an extreme angle.

High-Explosive Anti-Tank (HEAT) shells are a special type of shell with penetration much higher than that of AP and APCR types. HEAT shells don't lose penetration at distance and don't follow the standard principles of ricochet. Premium HEAT shells are great against heavily armored vehicles and at long range.

Shells can be bought in the Garage.

Note: at the beginning of the battle, the vehicle is automatically loaded with shells from the first slot. You can change the ammo order in the slots with the arrows 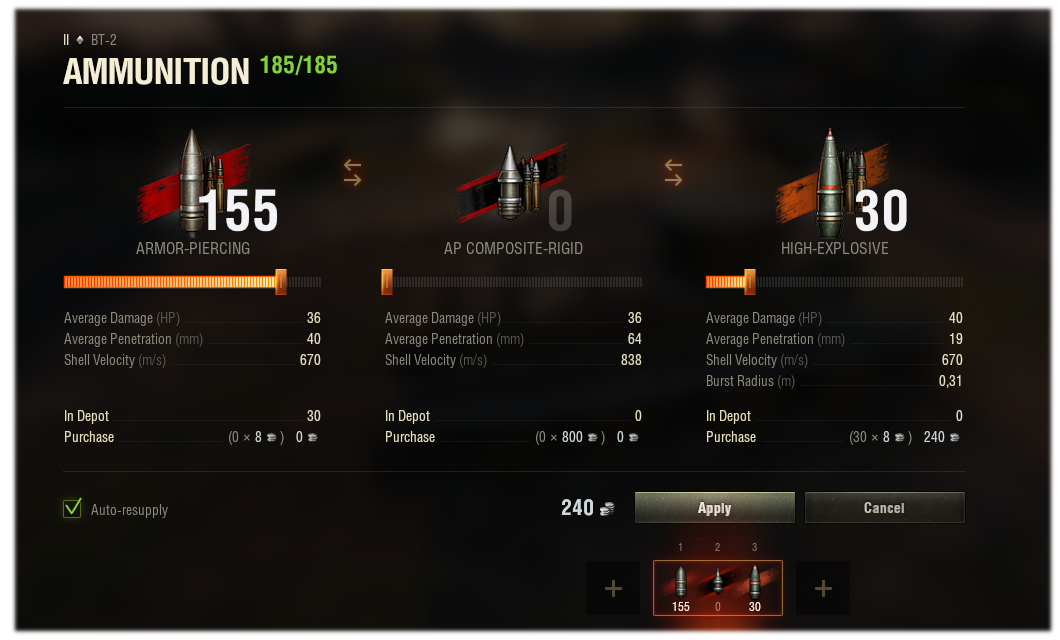 Select Auto-resupply to buy and equip the selected amount of shells after each battle automatically.

Equipment is a category of additional systems that can improve a vehicle’s combat characteristics. Equipment can be mounted on any vehicle starting from Tier II. The number of slots for equipment depends on the vehicle's tier: one slot is avalable at Tier II, two slots at Tier III and three slots at Tier IV and higher.

There are two types of equipment: standard and special.

Visit this page to learn more about equipment.

How to Buy and Mount

Equipment can be purchased in the Garage: 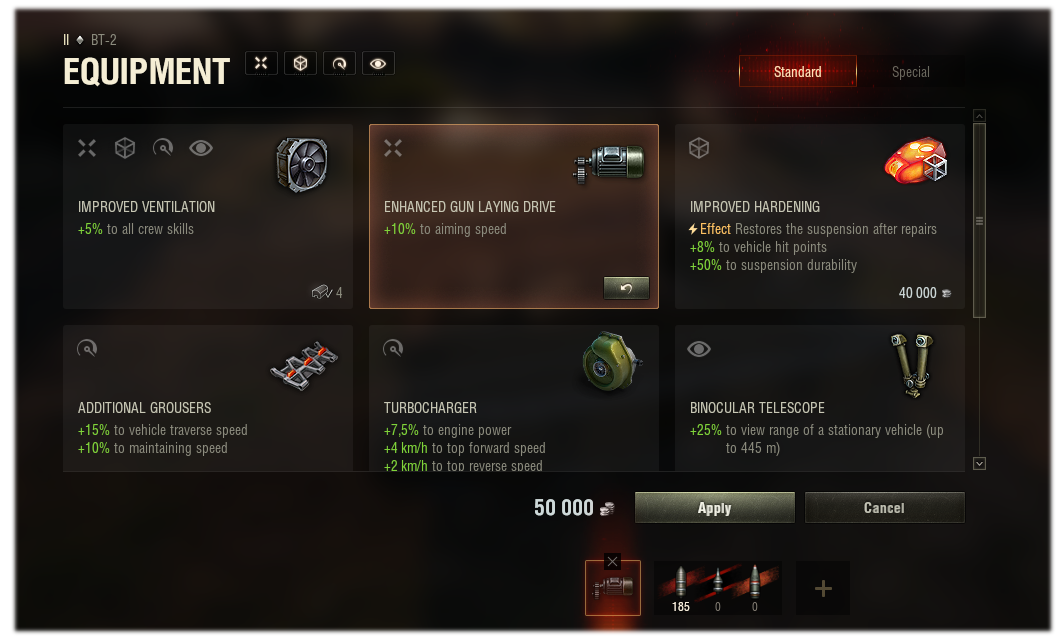 You cannot mount two identical pieces of equipment on one vehicle.

You can change the equipment order in the slots. Hold down the left mouse button and drag the equipment from one slot to another.

To demount equipment, select its slot and then click

Demount. The selected equipment will be sent to the Depot.

Use consumables to repair modules, increase vehicle performance, heal crew members, and extinguish fires during battle. Consumables are cheaper than equipment and work for any vehicle, but, if used in combat, they are gone at the end of the battle and have to be resupplied. Consumables are available for all vehicles from Tier II. The number of slots for consumables depends on the vehicle's tier. One slot is avalable at Tier II, two slots at Tier III, and three slots at Tier IV and higher.

You can buy consumables right in your Garage: 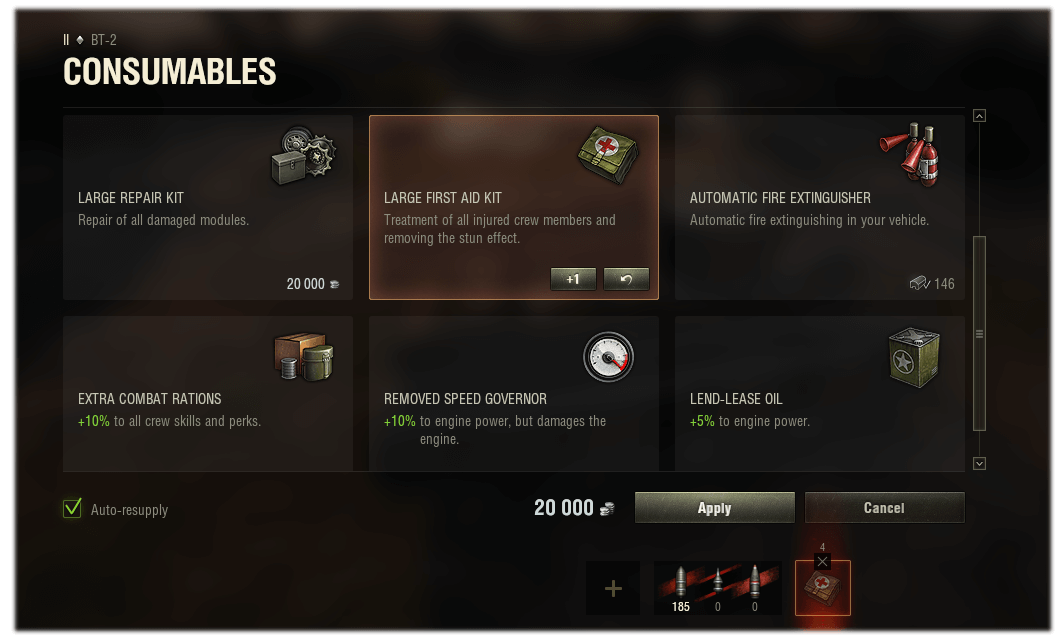 Select Auto-resupply to buy or resupply consumables from the Depot after each battle automatically.

No vehicle can roll into battle without a crew. A well-trained crew enhances your battle performance and is a key to your success on the battlefield.

Retrain and transfer your crew to higher-tier vehicles as you progress in the game! As the crew continue to learn skills, they make the new vehicles much more effective.

You've battled in your vehicle and upgraded it to the max. Are you ready to try out a new armored machine? It's time for you to explore the huge variety of vehicles in World of Tanks.

Researchable vehicles are the vast collection of vehicles of different nations and types, available to all players. To research and buy them, you will need Combat or Free XP and credits. Also, these vehicles can be partially or fully researched with vehicle blueprints. 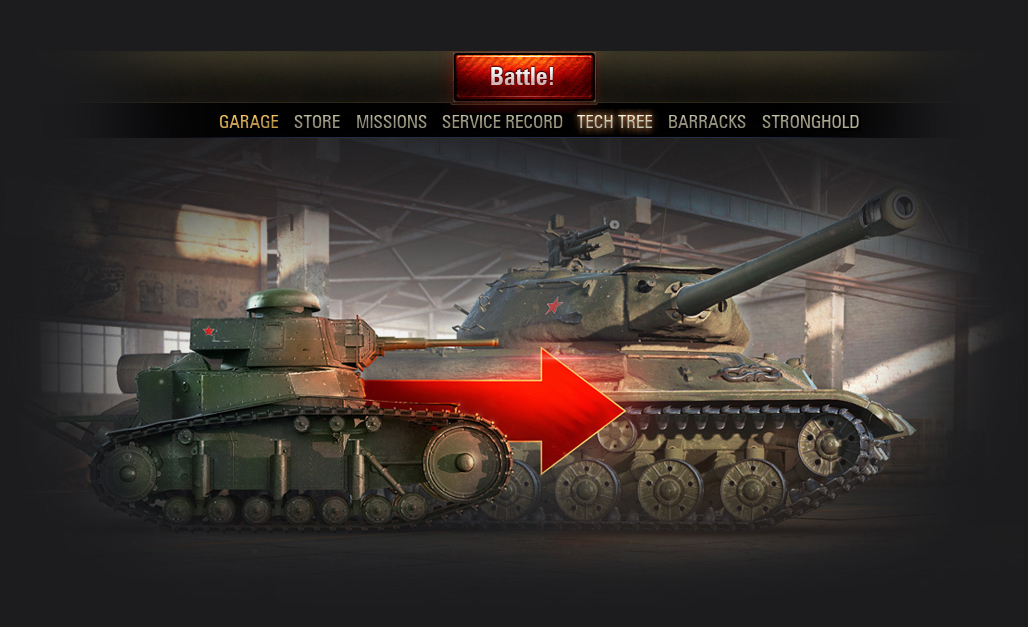 Go to the TECH TREE tab in your Garage to view all of the nations and researchable vehicles that exist in the game. Each nation is represented by at least one branch of vehicles from Tier I to X. On the TECH TREE screen, you can explore vehicle characteristics in detail and see research and purchase costs. Here you can also research and buy new modules and vehicles.

Premium vehicles are unique vehicles that you don’t need to research. You can buy Premium vehicles for gold or bonds in the in-game Store or buy them for real money in the Premium Shop. You can also get them as gifts, win them in various specials, or receive them as rewards for completing in-game missions.

However, with all their economic benefits, Premium vehicles are not invincible and don’t have special advantage on the battlefield. Therefore, to get great income on Premiums you still have to be a skilled fighter. 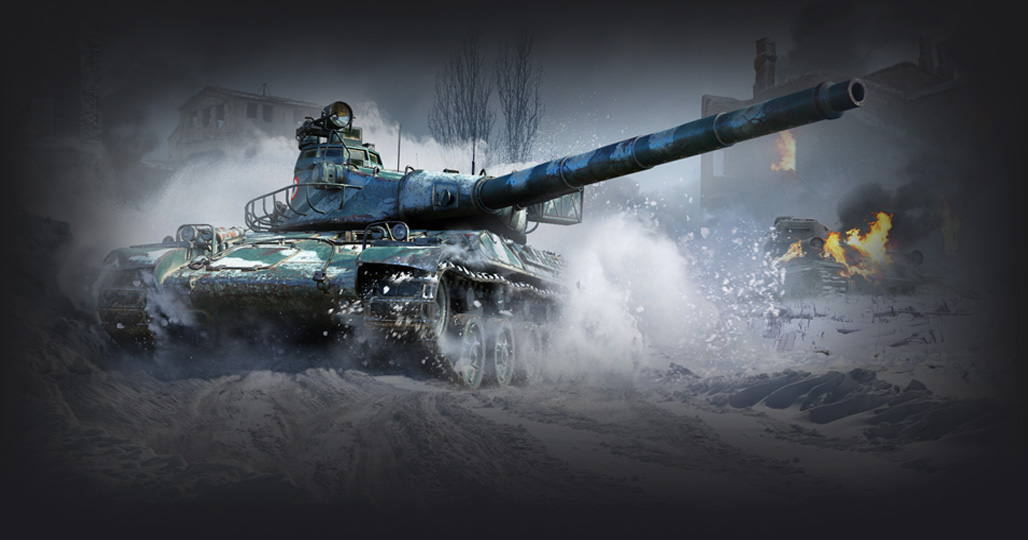 Some Reward and Special vehicles can be purchased for bonds in the in-game Store, or for credits during short-term special events like Black Market. You cannot purchase such vehicles for real money. 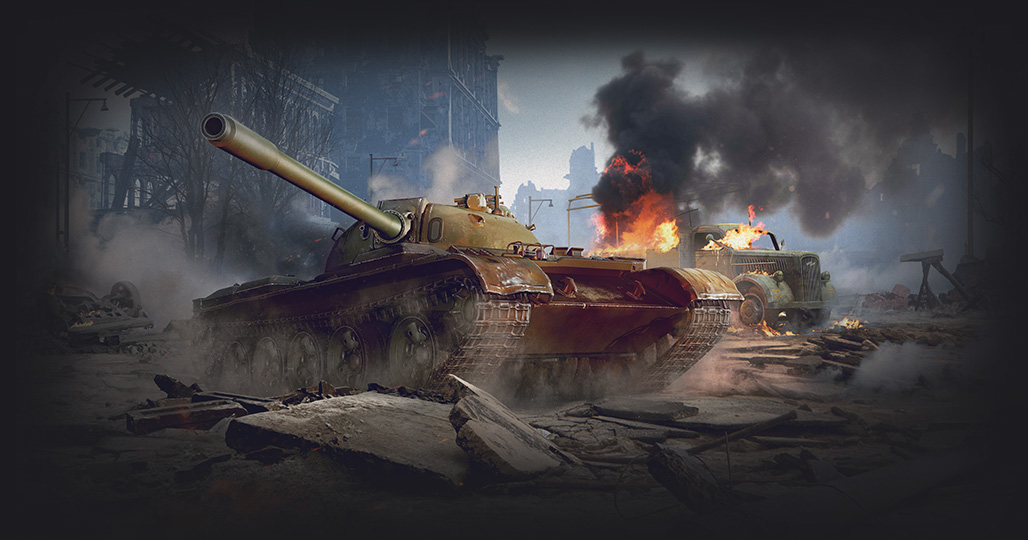 Reward and Special vehicles provide the same benefits as Premium vehicles, except for increased credits earned in battle.