If you catch a player disregarding the Game Rules, you can directly influence the situation by reporting their inappropriate behavior via the In-Game Complaint System. This system allows players to quickly report others without going through the longer procedure of contacting Player Support via the portal.

The following rule violations can be reported:

The In-Game Complaint System is based on the philosophy of self-moderation from the community. By limiting the reports to battles that the player has participated in and restricting the number of available complaints, we have ensured that the system cannot be abused. 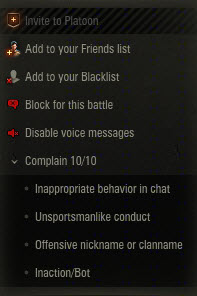 How the system works

To submit a complaint, hold Ctrl and right-click the name of the player you wish to report. You can choose from several available complaint options in a pop-up context menu. Only the pre-set options may be used. Input fields are not available.

To exclude the possibility of sending multiple unreasonable reports, the system allows only a limited number of complaints per player—10 per day.

Multiple complaints against a user within the same day are considered as one. Player Support does not receive entries like the following in the system: "Player 1 accused Player 2 of bullying his favorite Tiger.” The review process is statistical and based on the number of complaints on the player’s account. Complaints are the basis for viewing a user’s logs and handing out sanctions as needed.

Simply put, the complaint review is based on daily, consolidated statistics. Player Support opens a daily complaint list and by sorting this list will sanction the highest offending players first and continue down the list. The Support team checks the validity of complaints against a user based on their chat logs. As a result of this operation, only users that have been found to be in violation are appropriately sanctioned and false reports receive no action.

Foul language complaints in voice chat are not reviewed.

Why can’t I submit more complaints?

The number of complaints has already been increased from 5 to 10, but this number may again increase in the future. We analyze the statistics on a regular basis and decide whether any changes in the current system are needed based on the accumulated data.

What do the developers plan to do with the players who continue to abuse the Game Rules after being reported?

Users who have tendency to repeatedly violate the rules will face long term bans which may even lead to permanent account suspension.

How is a violation proven?

All complaints received via the automatic in-game complaint system are processed by Player Support. We cannot make the algorithm public to remove the possibility of bypassing it by those who disregard the Game Rules.

What if the allowed number of complaints is not enough?

Try to report only the most obvious troublemakers. If you play in a Platoon, decide between your Platoonmates who will send the complaint. Alternatively, you can ask other teammates to report a player.

Will there be an option to report a whole team?

There are no plans to add such a feature. However, if you suspect a rigged battle, please contact Player Support immediately.

What if I am unfairly reported?

All submitted complaints undergo a thorough check. If the complaint is unjustified, you won’t receive a suspension. If you were banned, but have no idea why, please contact Player Support.

How can I report a user who harasses me with unwanted Platoon/company requests or spams with direct messages?

As there is no option to report a player in the Garage, we suggest placing the player in your Blacklist and/or select Accept invitations only from friends in the Garage in the game settings.