World of Tanks is a team game, and teamwork is the key to victory. But in reality, there are always players who violate the Game Rules. That’s why in World of Tanks there is an automatic system of penalties for team damage and teamkills.

You can find the wording of the terms below.

Team damage is defined as damage caused to an allied vehicle by stunning, or destruction by overturning, drowning, or pushing from a height. Selfdamage is not considered team damage.

A teamkill is any action performed by a player that causes the destruction of an allied vehicle.

A player whose actions lead to team damage or a teamkill is considered a teamkiller.

Pushing from a height

How Teamkills Affect Your Team

Damage or destruction of allied vehicles (both intentional and accidental) not only causes bad feeling within the team, but also has unpleasant consequences:

All this greatly reduces the chances of your team being victorious.

How the System Deals with Teamkills

In the game, there is an automatic system of penalties for teamkillers. The system was introduced to the game to encourage players to pay mpore attention to their allies and concentrate as much as possible on the main goal of the battle.

The main purpose of this system is to detect and penalize teamkillers in a timely manner and to minimize the consequences of inflicted teamkills. The system was launched in Update 0.6.4 and is constantly being improved in accordance with the increasing number of possible scenarios.

The general principles of the system are described below.

How the System Tracks a Teamkiller

The system stores the following information on each account:

Rating (local and global). This is a variable quantitative characteristic that shows the system's level of confidence that a player is a teamkiller.

The local rating is an indicator of an individual battle, which comprises all actions performed by a player in the battle.

The global rating is the total number of teamkills caused by a player in all battles.

Status (global and local). This is a qualitative characteristic based on changes in the current ratings of a player. One of the following statuses can be assigned to an account:

All ratings and statuses are updated based on various actions performed by a player during a battle.

The local rating can be affected by any action performed in a battle that is considered to be a team damage action, including pushing into water, and stunning allied vehicles.

What is Not a Team Damage Action?

The following actions are not considered to be team damage:

In addition, the system is turned off in the modes dedicated to specific game events, where appropriate.

The Effect of Team Damage on the Rating of a Violator

Any violation of the Game Rules is penalized by the system. Regardless of the player's status (global and local), a player who damages or destroys allied vehicles during a battle is penalized in credits and experience after the battle. The penalty is calculated as follows:

Moreover, if the violator has the Repair automatically box checked, the compensation and the penalty are paid first, and only then are the repairs paid for from the remainder.

Thus, the affected player always receives the compensation equal to the cost of repairs of the damage caused by the ally. The violator in penalized for this amount of credits + a 10% penalty on this amount. 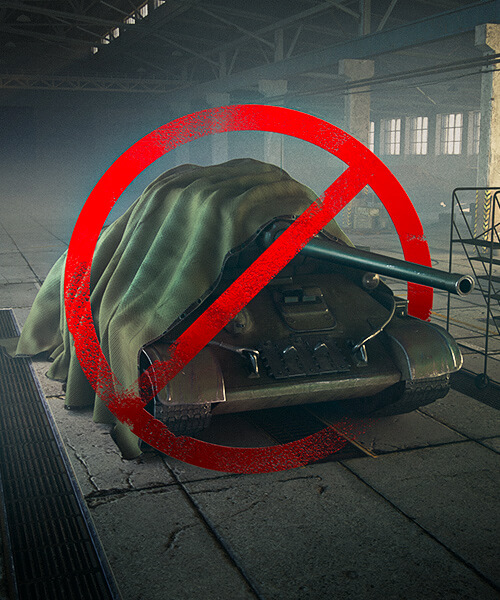 In addition to penalties, restrictions to access to the game can be imposed on the violator, ranging from a one hour ban to permanent blocking of access to the game server, in the case of systematic violations. There are threshold values to track inveterate teamkillers.

The thresholds are used when the account statuses are updated. The account status only changes when the corresponding rating exceeds the set thresholds. The restrictions are imposed on the player when the status changes from "under suspicion" to "teamkiller".

The penalties cannot be appealed. The administration does not interfere in the work of the automatic system, does not impose additional restrictions, and does not reduce the duration of the existing ones. Player Support does not review appeals, nor impose or call off such penalties.

How to Stop Being a Teamkiller

If a player fights a lot of battles in a row without damaging allied vehicles, their rating as a teamkiller is lowered.

In order not to risk your reputation, try to avoid situations with a high probability of damaging or stunning an allied vehicle.

For what actions are the penalty points charged?

The penalty points are charged for damaging or stunning allied vehicles. Critical damage caused to modules (suspension, engine, etc.) is also taken into account. Even in the case of pushing from a slope or drowning, the automatic system of penalties charges the penalty points, which accumulate from battle to battle. This leads to an account ban.

How are the penalty points deducted?

The penalty points are deducted when the enemy vehicles are destroyed and your team wins the battle.

Why was I banned? After all, shots at allies do not cause damage.

Your account has been banned because the penalty points reached the set threshold. Under no circumstances are you permitted to damage or stun allied vehicles.

Other players prevented me from playing—they pushed me out of cover. Why was I banned?

In such situations, emotions, of course, are overwhelming, but do not take the bait. Send your complaint about unsportsmanlike conduct using the Complain option and continue the battle.

Why didn't I get the compensation for the damage if the other allied player was the first to damage my vehicle?

Because you got the status of "under suspicion" (blue nickname) sooner. The damage caused to an ally whose nickname is blue is not taken into account by the automatic system of penalties.

I accidentally damaged/stunned an allied vehicle once and got banned. Why?

You have earned penalty points in previous battles, and this time when you damaged/stunned allied vehicles, the penalty points reached the set threshold for a ban.

Why have I been banned for three months?

For those players who constantly damage allied vehicles, the period of the ban gets longer with each subsequent violation.

My team player insulted me, I destroyed their vehicle and got banned. Why?

Please don’t take the law into your own hands. You violated the Game Rules by damaging or destroying an allied vehicle. To complain about inappropriate conduct, use the Complain option.

An ally destroyed my vehicle, but didn't get banned. Why?

This means that this player wasn't charged enough penalty points to be banned. However, such a player will still receive a penalty to experience and credits.