Tiger II may look fearsome, but with an incompetant crew at the controls, it may as well be a large kitten sniffing flowers in the battlefield.

We exaggerate, but you get the idea - A good vehicle is nothing without an equally good crew, and even a middling vehicle can be a true terror if you have an excellent group assigned to it.

The training level of each crew member is represented as a percentage value. This level determines the effectiveness of that crewmember in his or her duties. The higher the level, the better they are at it. 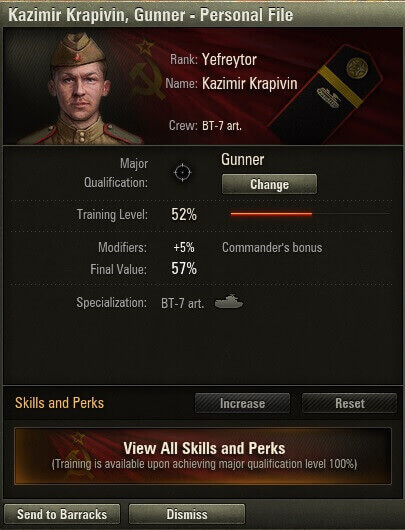 Here we see a gunner with a training level of 52% (disregarding the modifiers). With such a low score, you'll most likely experience lackluster accuracy with your shots, and slower turret rotation  - critical if you're trying to get a quick shot at a flanking enemy. Needless to say, this is less than ideal. 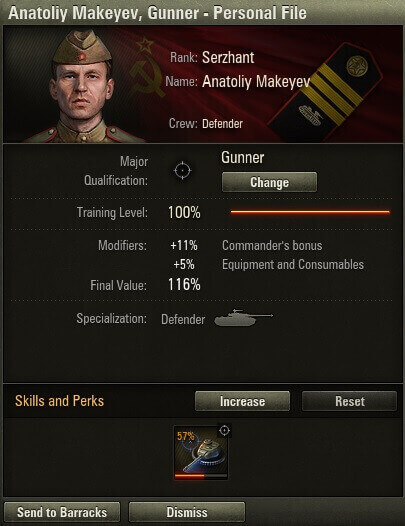 Contrast that gunner with this one, with a total level of 100%. With some additional bonus modifiers added to it, this is pretty much the best you can get in terms of crew training. At this level, your shots are as tight as they can be, and your turret turns on a dime.

This concept applies to the other crew positions. Drivers accelerate and reach higher top speeds faster, Loaders ensure your next shot is ready as soon as possible, your commander extends your vehicle's view range to its very maximum, and so on.

"How do I increase Crew training levels?"

Let's assume that your Crew is at maximum training levels and continuing to earn Crew EXP. When that happens, their Crew EXP will go towards developing their first Crew Skill slot, raising its quality from 0% to 100%.

Crew Skill slots allow you to choose from several Skills and Perks for the crew member, granting a variety of beneficial effects in battle. Skills are selectable from the start and increase in effectiveness over time, while Perks only become active when the Crew Skill slot reaches 100%. 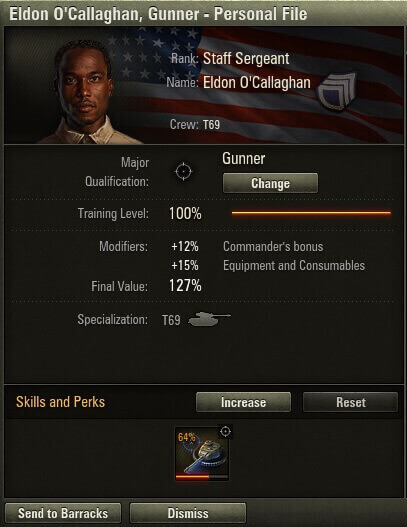 In this example, the crewmember here has achieved a 64% progress on his Crew Skill slot. The more Crew EXP he earns, the higher this number will go, until the Crew Skill slot caps out at 100%. A new Crew Skill slot will unlock when the crew next receives Crew EXP, allowing you to choose .

There are two ways in which to earn more Crew EXP:

"What sort of benefits do I get with Crew Skills and Perks?"

You'll be surprised at how important these are. Here are some of the most popular ones that all players will want: