The term Armour Penetration refers to the ability of a gun to pierce through the enemy armour. The value is counted in millimetres, so if a gun has the penetration value of 110 for AP rounds, it means that it’s capable of piercing through an average of 110 mm of armour over the distance of 100 metres with standard armour penetrating shells. The final value may be either higher or lower by up to 25% of the average value, however.

This means that in order to be able to avoid taking damage from shells fired with that gun, your armour thickness needs to be greater than at least the gun’s average penetration value. However, if you compare the armour thickness of most vehicles to the penetration values most guns have on the respective tiers, you will notice that the former may often seem insufficient in terms of protection against the latter, at least on paper. This is where the term Effective Armour Thickness comes into play.

Here’s a handy table illustrating how much an angled armour plate increases its effective thickness value:

As you can see, the more acute the impact angle, the more effective the armour. If you’d like to learn more about the mechanic and/or see how it works in the game, you may find the following guide helpful:

As you have probably noticed by now, various tanks tend to differ greatly in design, especially when comparing them in the span of the tiers and classes. Those differences may relate to the size, shape and armour layout, with the latter providing better or worse protection to the vehicle at large. As a result, driving heavy tanks, for example, does not mean you can expect similar levels of sturdiness and protection between individual machines. In fact, some vehicles are easier to penetrate than others, partially because of the differences in armour thickness, and partially because of the plates being badly sloped, if at all. If you’re driving one of such unfortunate vehicles, you need to learn how to “artificially” slope your armour plates, thus optimizing their effective armour thickness and raising your survivability as a result. You can do that by performing the armour angling manoeuvre, also known as the diamond/ invincibility position.

In order to perform the manoeuvre successfully, make sure to follow these simple steps: 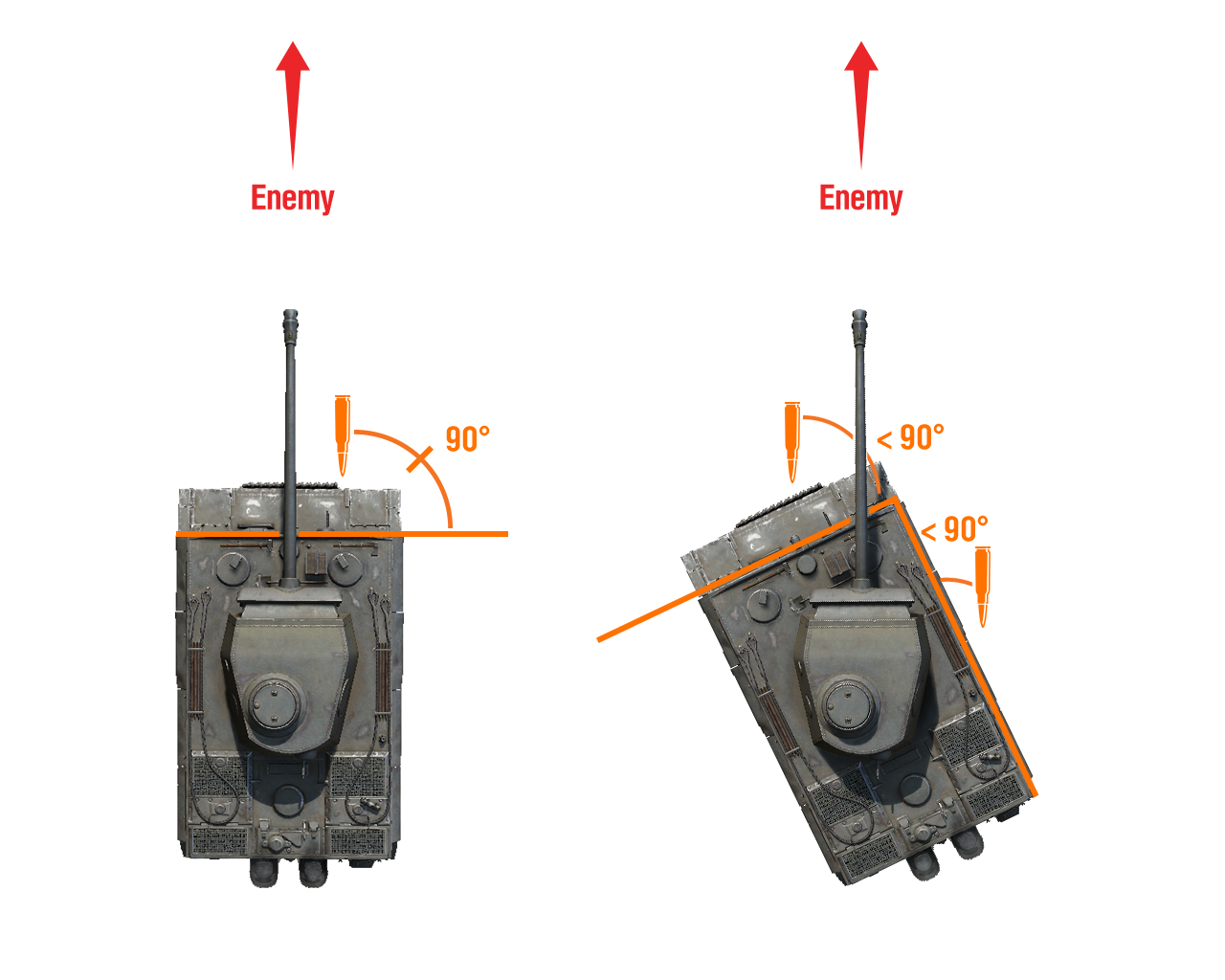 IMPORTANT: Please note that there are certain tanks, particularly in the Soviet and Chinese heavy tank branches, which have frontal plates with a peculiar beak-like shape. This design raises the frontal armour effectiveness of these vehicles tremendously when facing the enemy directly, but on the other hand it makes a good armour angling manoeuvre next to impossible. When in a stand-off situation while driving one of these tanks, always try to battle your opponent face-to-face because angling your armour will, in most cases, result in you nullifying the “beak’s” angle-effectiveness bonus.

Side-Scraping is a particular version of the armour angling manoeuvre, which requires two things: an obstacle (a house, huge rock etc.) which will serve as cover for the front of your tank and a tank with a reliable side armour (thick plating, spaced armour, side skirts or a combination of those). The manoeuvre has two variants, depending on the design of your vehicle and the placement of the turret:

1st Variant: Turret mounted in the middle/ slightly on the front of the vehicle 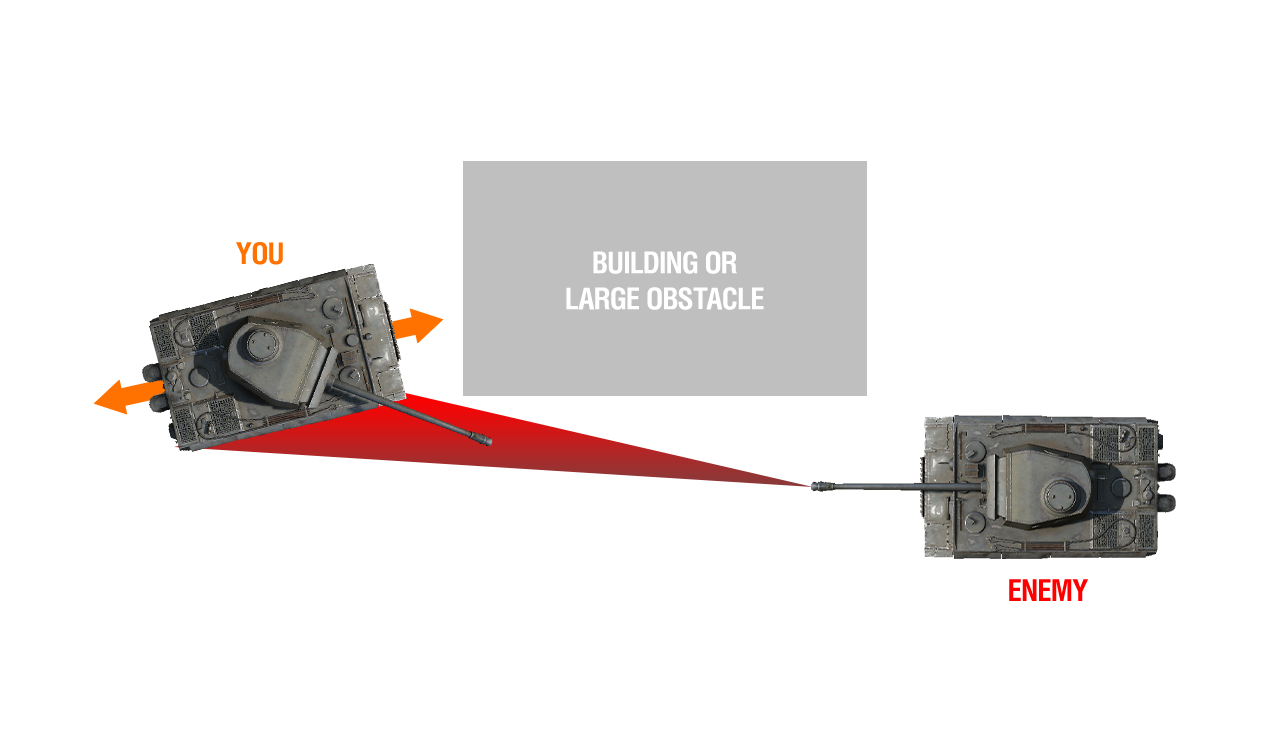 Drive to some large object, such as a house or a huge rock, and touch the surface with the front of the vehicle. Next, angle your position slightly in such a way that your rear is sticking slightly out on one of the sides of your cover and then drive back a little. If you do it correctly, your frontal plates will remain covered by the house/rock while still allowing you to fire at the enemies in front of you. Even though side-scraping leaves both your turret and sides exposed, the hull is situated at a very acute angle towards the enemy in front of you. This means that all fire directed at it will have a very high chance of bouncing off or being absorbed by your suspension. As the turret is usually the sturdiest part of a tank, it won’t be easy to damage either.

2nd Variant: Turret mounted on the far back/ far front of the vehicle 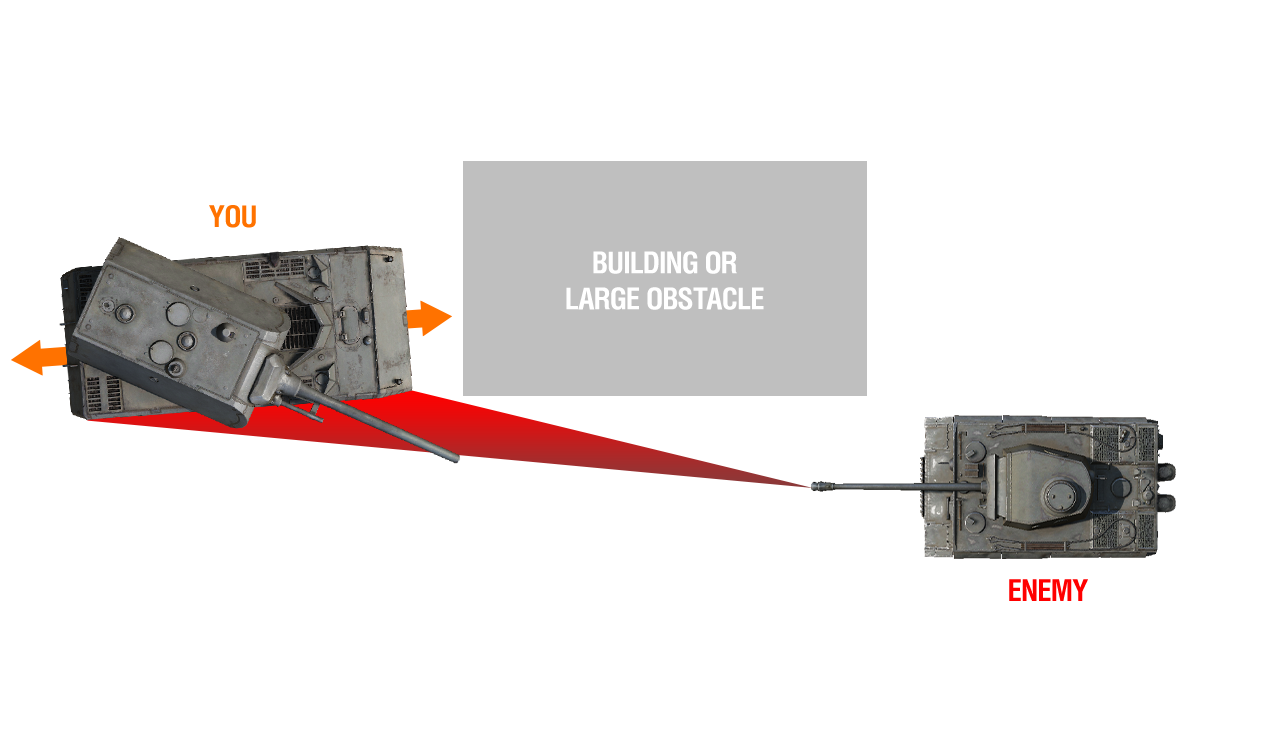 Arguably, the rear-mounted vehicles are especially effective with this manoeuvre. The execution is exactly the same as described above. However, the rear-mounted turret makes it possible to achieve an even steeper angle, which translates to even more dinged or absorbed shots.

When it comes to vehicles with frontally mounted turrets, however, it tends to get a bit trickier. Of course, the standard approach should work too, but mind that in this case it is very hard to side-scrape and still keep the frontal plate hidden – the turret is simply too close to the front of the vehicle for that. As a result, some experienced players use a modified version of the manoeuvre, which can be described as ‘reversed side-scraping’. The main difference between this and the standard one is that you place your tank’s rear, instead of front, by the covering obstacle. Reversing the tank’s position places the turret of the vehicle in the back, which in turn significantly broadens your area of coverage without any negative effects on the hull’s angle. Basically, you act like a tank with a rear-mounted turret.

IMPORTANT: Please bear in mind that this manoeuvre is very difficult and extremely risky. If you don’t position yourself correctly, you may expose your tank’s rear towards the enemy. The rear is the most vulnerable part of any tank, so if you’re on the frontline and expose it towards the enemy attack force, you will face immediate obliteration. If you’re not entirely comfortable playing tanks with rear-mounted turrets, we strongly advise you NOT to attempt the reversed side-scraping.