Why would you want to capture the enemy's vehicle? Well, the answer to that question can be pretty simple: because it is better than yours. In this article, we'll explore the odd tradition of captured vehicles in tank warfare.

The history of World War II shows that capturing tanks could come in handy when you lack armour or firepower, and one very good example would be the

This tank is considered one of the strongest machines produced during the conflict, and ironically enough, many countries used it against its German creators.

In October 1944, Canadian forces captured an intact Panther in Italy and called it "The Deserter". It was used during multiple assaults, including one against a German observation post before it was sent out of the front to be studied. A few months later, in January 1945, the British also found an abandoned Panther in a barn and decided to use it to push through the Netherlands villages. Christened "Cuckoo" this Panther was wearing the khaki of the British

Churchill VII  and fought during the battle of Geijsteren Castle and Operation Blackcock.

Poland also had some successes with capturing a Panther. Already available in World of Tanks, the "

Pudel " was a key player of the insurrection of Warsaw, in August 1944. This vehicle was one of the tanks stolen from the German by the Polish Rebels, who used it tremendously in their capital city. First, to destroy several German machine guns nests, then by moving it against the Gęsiówka concentration camp, where the tank freed no less than 340 prisoners. After this heroic rescue, the Pudel served in the streets of Warsaw, where it held its ground against ever coming German forces and

All Tanks Are Different

But there's a counterpoint to every success story. Of course, we could talk about the reliability of the Panther, which often broke because of technical issues, both in the hands of German or Allied crews. But we have a better example: the

B1  tank. Massive and heavily protected, this French tank was a terrifying opponent at the beginning of World War II. That said, it was defeated by the speed and mobility of the German tanks operating under the Blitzkrieg doctrine.

As a result, when German troops started to occupy France, they had dozens of B1 tanks on their hands and no idea how to make them useful. Transforming this beast of metal wasn't as simple as working on light or cavalry tanks, even with the help of two occupied factories (Renault and AMX). That's probably why the Axis changed the name faster than the actual tank! The B1 became the Panzerkampfwagen B1 Bis 740 (f), but in reality, the vehicle was usually designated as

Whatever the name, the vehicle turned out to be a nightmare for the German engineers. Unlike the Czechoslovak tanks, and especially the

Pz.Kpfw. 38 (t) , the weapon systems from Germany didn't fit the French standards at all. After several battles, but officially out of the famous Panzer Divisions, the German command decided to turn the B2 into a flamethrower tank.

Germany already had experience in that type of conversion with tanks like the Pz.Kpfw. II Ausf. D and Ausf. E, which were turned into flamethrower vehicles. But despite this knowledge, the B2 was still capricious and didn't match the Wehrmacht's needs. That's how the Germans started to combine the massive French B1 hull with the

105 leFH18B2  gun. And yet, the B2 would not obey its new masters. The only way for the Germans to extract at least some benefit from the captured tanks was to equip them with parts built in France.

However, the British took care of that. In March 1942, a raid bombed Boulogne-Billancourt and turned the B2 factories into ruins. 370 civilians were caught in the fire, but the repair base of the of Pz.Kpfw. B2 was done for. That didn't prevent the remaining tanks from organizing in different brigades, some of them sent against the landings in Normandy a few months later. Funnily enough, when the French Free Forces crossed path with some B2, they usually captured and reused these vehicles in proper units - a more symbolic than strategic decision.

Since capturing tanks to use them directly gave somewhat mixed results, it was often more reasonable to study the vehicles than putting them on the field. An iconic example shows how great this strategy could be: the

Tiger 131 . Captured almost operational after a short-lived career in North Africa, this famous vehicle was repaired by British crews, who used spare parts from other wounded Tiger to bring it back to life.

The vehicle turned out to be one of the most vibrant symbols of the British victory over Rommel and the Afrika Korps. A symbol so powerful, in fact, that it was quickly sent to the U.K. for a very detailed study. The machine was carefully inspected, and a technical description of it was also compiled. The document was 250 pages long and helped the British command to design the Sherman VC fighter tank, also known as the 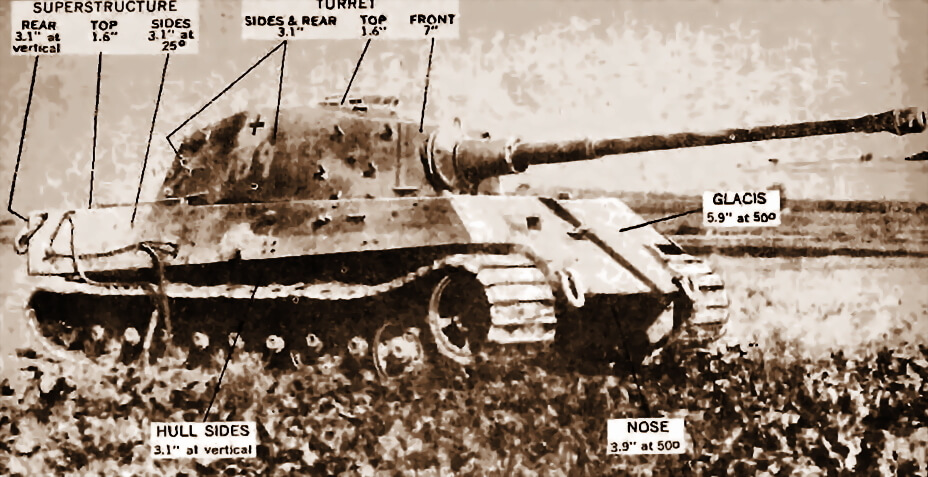 Annotations on a picture of a King Tiger

As you can see, this kind of studies could have a huge impact on the overall conflict. Especially when some new machines popped up on the battlefield. This was the case with the

Tiger II , or King Tiger. First encountered by the British forces in July 1944, in France, this vehicle was surrounded by a cloud of mystery.

This could be explained by various factors: from the lack of communication between the armies of the Allies, or the different turrets that the King Tiger was wearing, to the sabotage of German crews. But in the end, the Allies managed to get their hands on a fresh enough Tiger II. After a complete study, they claimed it was the strongest tank from the German arsenal at the time. They also find out a break of the front armour was unlikely, and that several well-known techniques already used against Panthers or Tigers were not working on this beast. In the end, knowledge is power, right?