Round Three of the #ANZPL is down, and Round Four is around the corner! As we’re at another Wednesday, we’ve compiled a highlight from each match up as well as a recount of all the action to catch you up to speed if you’ve missed out!

First up however is a show that does what this article does but even better! Each Tuesday at 8:00PM UTC+10 our ANZ CCs put together the best moments, talk about the best play by the players, and analyse next weeks matches in the ANZ Premier League Barracks, your one stop show for everything related to the #ANZPL as apart of our Tanks.TV offerings! Drop by our Twitch Channel to see 9_9_destroyer and FadingNeptune get you up to speed and take the deep drive on everything ANZPL.

Check out this weeks episode here!

The New Zealand Derby, Auckland v Christchurch. Two strong New Zealand teams faced off to prove who was the country's strongest! Sand River brought us an incredible Game Two with the Conquerors looking like they had the win secured until some incredible play and exploitation of the Conquerors mistakes by the Archers secured them the upset win, and the 2:0 lead going into the ANZPL’s first match on Himmelsdorf! The battles were close and the Conquerors had a solid Game Three, but couldn’t manage to break the Archers down, with the Archers winning the series 3:1.

The first Match where the Westerners verse the South instead of East Coast! After coming off our first Himmelsdorf match just moments ago, we were straight back on to a Himmels showcase. The first games were absolute brawls, with some strong performances from both sides, but the Panthers clutched the victory in the first, and had a convincing win in the second. Action X held strong in Game Three, and were pushing for the draw to hold the series even, but an impressive last stand by JimmyGroken lead the Panthers to winning the series 1:3.

This was the game to watch this week, the undefeated Bulldogs came up against the Sentinels who were desperate for a win after drawing every game in the ANZPL so far. The Sentinels came out of the gate swinging, with an incredibly risky play down Prokhorovka’s 1 and 2 line by Rainbow and Rowendy which paid off in droves. The chat was convinced the Sentinels were going to break the draw streak, being up 2:0 at the half time break, but unfortunately for them, some great play by the entire Bulldogs team saw the series tied at 2:2

Each week one of our ANZ CC’s will be giving it their all and casting one of the game’s most intense moments, this week features stewiejp covering some of the most intense matches of the night. Drop by and give him a follow on Twitch and a sub on YouTube to be across more of his content! 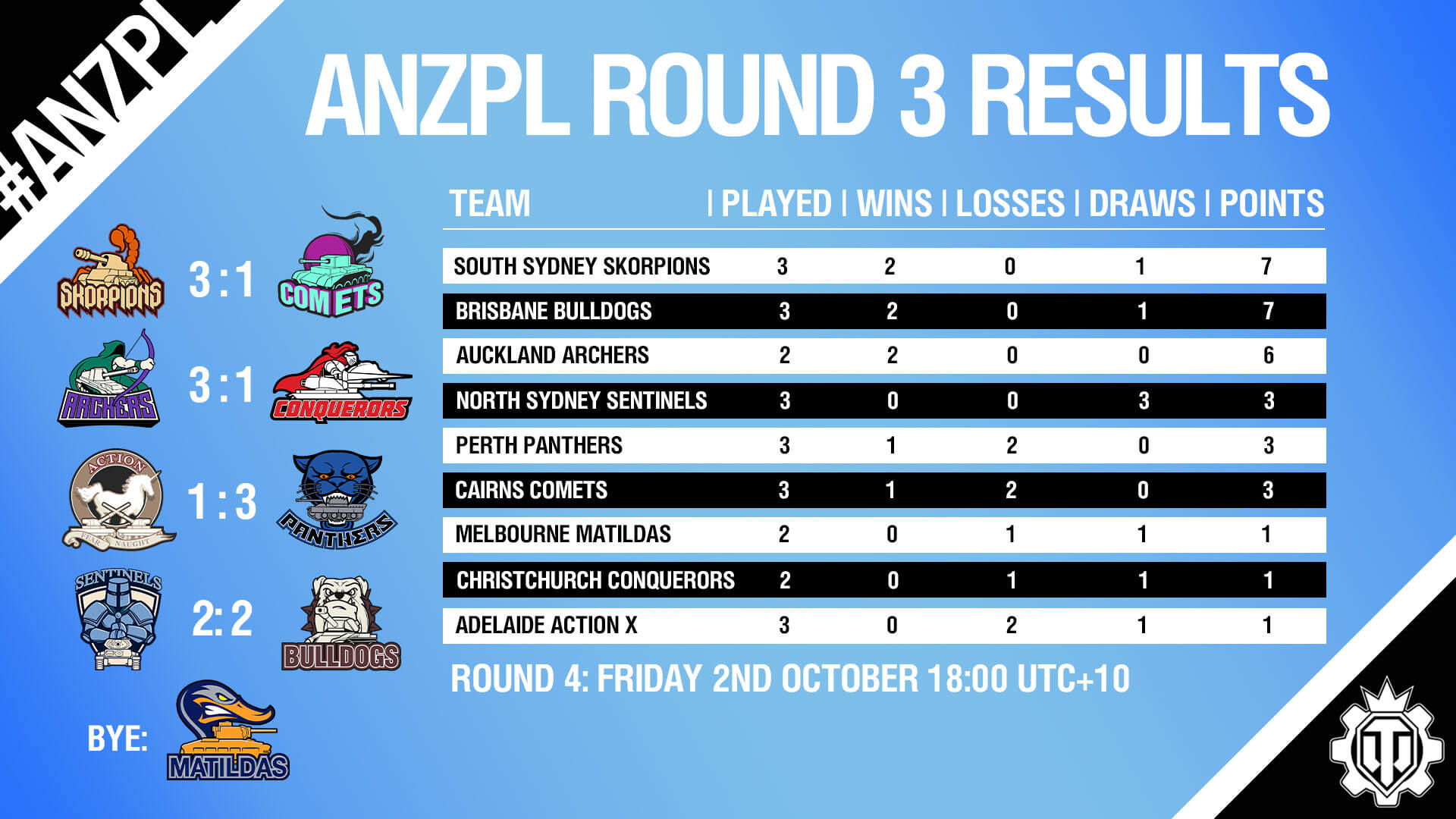 The South Sydney Skorpions knocked the Bulldogs off the top of the standings, with a hotly contested first, second and third place with a point of difference between all three places. The middle of the leaderboard is just the same, with a win or draw for any of the teams likely to have a major impact on the leaderboard. A lot could change this week.

Here are the matches for this Friday, starting at 6PM UTC+10 over at our World of Tanks ANZ Twitch Channel! Hosted by Ben "SandMan" Green and Jordan “Elfish” Mays.