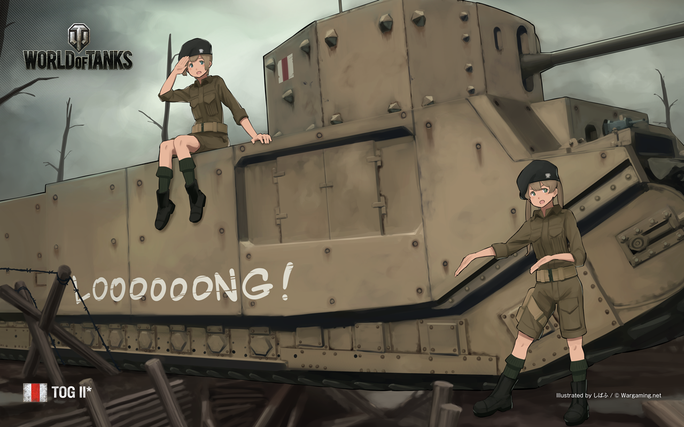 The 12th and final illustration is a tank known by many players for its distinctive long hull, the TOG II* heavy tank!

In the late 1930s, the British realised that they were lagging behind in tank development. Thus, as soon as World War II began, they created the Special Vehicle Development Committee (SVDC). The SVDC's members were involved in the development of tanks in WWI, and included prominent figures such as Sir Albert Gerald Stern. The tanks they created came to be called “The Old Gang".

In developing tanks for WW II, the SVDC expected the same sort of combat as seen during WWI. With that in mind, they tried to build a land ship that would be effective in trench warfare. Specifically, they built a vehicle that was able to withstand close-range fire from 47mm tank guns and 105mm howitzers. It also came with a gun that was capable of penetrating 2m of concrete. This vehicle could also cross trenches 5 metres wide and climb obstacles 2m in height. All these traits culminated in a test vehicle weighing over 68 tons, known as the TOG I.

Having seen the result, the SVDC aimed to lower its height and cover the tracks with armor, and this was accomplished in the TOG II. The final production version TOG II R was expected to be smaller and lighter, weighing in at around 62 tons. Even so, this was still a super-heavy tank that was 10m long and 3m tall, ridiculously huge for a tank.

When the development of the TOG started in 1941, there was no British tank able to mount the 6-pounder required to counter German armor. The TOG II seemed like a convincing candidate at the time. Even though it still had a wooden mockup for a turret, the TOG II actually performed better than the Valentine or the Matilda Mk.II infantry tanks during trials in July 1941.
Its diesel generator-powered drivetrain constantly overheated, and there were even instances where it exploded during testing, so there were technical issues that still needed to be overcome.

As modifications were made to the vehicle, the weight reached 80 tons, and the development ground to a halt. At around the same time, the Churchill infantry tank was completed. With time, M3 and M4 medium tanks started arriving from the US as well, leading to the cancellation of further development of the TOG II.