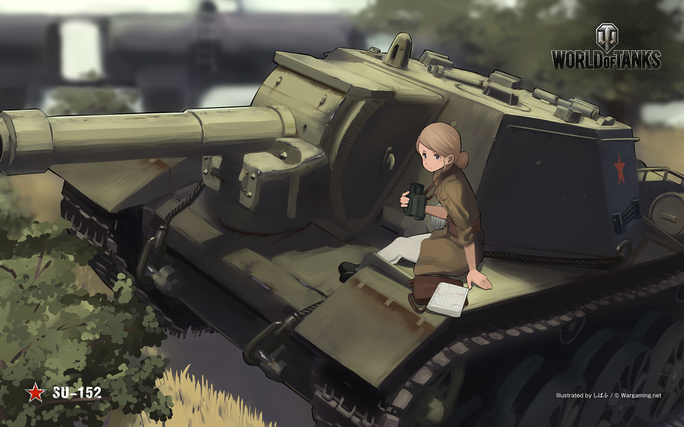 Featured this time is the Soviet tank destroyer SU-152, lovingly named "Zveroboy" ("beast slayer") by the troops for its ability to destroy the German Tiger tanks.

Prior to World War II, the Soviets were not interested in the development of self-propelled artillery or assault guns. They not only had the KV-1 with a potent 76.2mm gum, but also fielded the KV-2 with a 152mm gun, which had no equal at the time. Also, the main concern about this sort of vehicle was: would this new weapon be a tank or an artillery piece? The Soviets were not keen on creating a weapon that had the potential to spark an organisational conflict between the armour and infantry on who gets the new toy.

However, when the Germans invaded the Soviet Union in 1941, the Soviets were shocked by the Germans' Sturmgeschütz III, which was capable of filling both infantry support and anti-tank roles. In response to this, research and development of a Soviet assault gun began. When the Germans started bringing the Tiger I heavy tanks to the front lines in late 1942, things progressed even more rapidly. Because destroying Tigers was a priority, the assault gun had to have a main gun powerful enough to destroy them. Captured Tigers were used for extensive firing tests, and the 152mm howitzer ML-20 was chosen as it was capable of defeating the armor on the Tiger I. A fixed fighting compartment with an improved version of the gun, the ML-20S howitzer, was mounted on the hull of a KV-1S. This experimental assault gun KV-14 later was adopted for service as the SU-152.

The 152mm howitzer ML-20S required two loaders, and the warhead alone weighed 48.76kg. The muzzle velocity wasn’t spectacular at 655m/s, but the gun was capable of penetrating 120mm of armor at 1,000m range. At the same time, it suffered from slow reload times and low ammunition capacity of just 20 rounds. Even with all its flaws, it was welcomed by the troops as a heavy assault gun that could counter the Tiger I heavy tank. Along with this reputation, it gained the nickname “Zveroboy”, which means “beast slayer” -- a perfect name for a vehicle made as a trump card against German tanks.

In the climactic engagement at Kursk in July 1943, the SU-152s were collectively placed under the Independent Heavy Self-Propelled Artillery Regiments (OTSAP), and helped halt the German offensive.