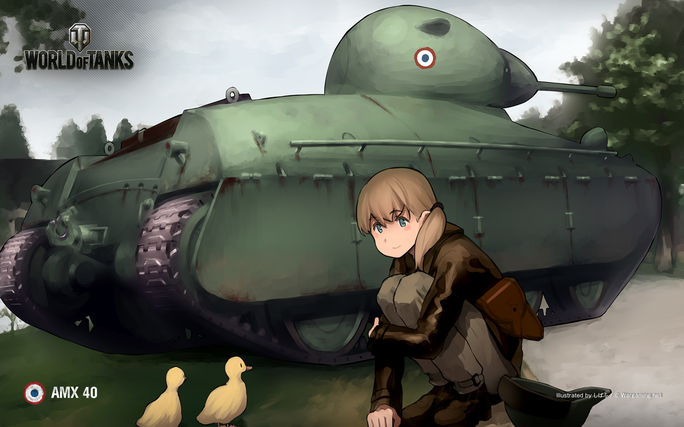 The seventh illustration features a tank popular among players for its unique look, the Tier IV light tank AMX 40 !

We have prepared a wallpaper version, so feel free to decorate your desktop with the illustration of "The Duck"... relaxing on the roadside with precious little ducks!

The Christie suspension influenced Soviet and British tank designs, but of all the world's nations, France was the most heavily influenced by this particular design.

When an Anglo-French tank co-development project was launched in 1939, engineer Joseph Molinié and Atelier de Construction d'Issy-les-Moulineaux (AMX) jointly proposed a tank combining the Christie suspension and a radical French-style armour layout. The resulting design was the AMX 40.

The distinct feature of the AMX 40 was the adoption of the two-man turret and extremely curved armor layout, which provided strong protection all around. The armour was sloped and quite heavy all around, averaging around 60 mm on the hull. On top of that, the Aster engine was thought to be able to allow the tank to reach 50 km/h, but in World of Tanks, the vehicle does not achieve such speeds due to other characteristics that hamper its acceleration. This memorable design came out of the endeavor to create an invincible cavalry tank.

However, before the development of this tank could go any further, tensions with Germany escalated into full-scale war. All resources were diverted to war efforts. Besides that, tanks such as the Somua S35 and Renault ACG1 were already available, and the British (who were the co-development partners for the AMX 40) were also already building Cruiser MK.II (A13) tanks. Because of these circumstances, the project was thought to be redundant and was subsequently abandoned.

Ultimately, the AMX 40 never made it past the drawing board. Not even a mock-up was created.