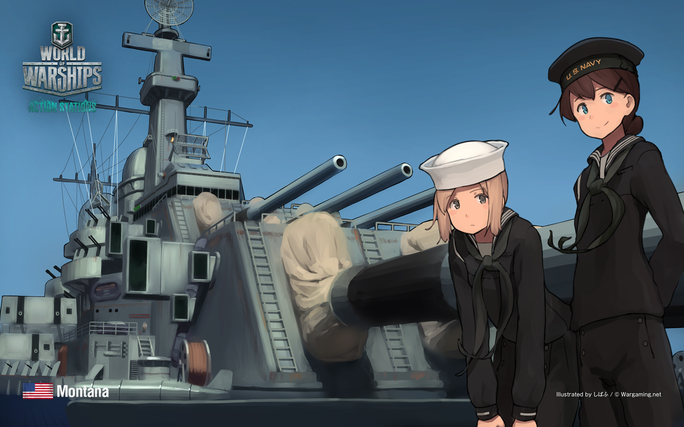 A new World of Tanks collaboration with popular military illustrator Shibafu is starting! A vehicle will be introduced with each issue along with attractive characters in this new illustration column Sisterhood of Steel feat. Shibafu.

World of Warships has been featured for the second time, as the sixth illustration in the series! The ship portrayed this time around is the top-tier U.S. battleship, built to be stronger than even the Iowa... the Montana!

There are wallpapers available this time, too! Download and decorate your desktop!

--- The Super Battleship That Never Was

The U.S. Navy's Iowa-class were exceptional fast battleships, capable of achieving speeds greater than 33 knots. Their armour, however, was only designed to withstand hits from incoming rounds of calibres up to the conventional 40.6 cm ones. This was of great concern, because at the time, the U.S. was already aware that the Yamato-class battleships were under construction.

Their armour was not meant to resist the 46 cm (18-inch) shells used by Yamato, or their own 40.6 cm super-heavy shells, and so, they left much to be desired. The South Dakota-class also suffered from the same problems, so the U.S. Navy began construction of the Montana-class as an answer to the new Japanese battleships, which were supposedly designed to carry 18-inch guns. The U.S. Navy, however, believed that these battleships would only mount 16-inch guns, and designed the Montana with that in mind.

There are two points to note about the Montana.

Firstly, it ignored the “Panamax,” the maximum size limit for traveling through the Panama Canal. This was the first U.S. battleship to be free from this restriction, and the beam was to be over 37 m. In the event that the Montana was completed, the Canal was to be expanded soon after.

Secondly, her protection was thoroughly reinforced. The belt armour was of a two-part construction, which was unusual for an American battleship, and the main deck armor was 154 mm thick, with 55 mm more on the upper deck to help her withstand long-range plunging fire. Of her 63,000 long tons of standard displacement, around 21,000 were used for protection.

In view of her increased armour, her speed had to be compromised, because reaching the Iowa-class' speed of 33 knots required the development of a completely new set of engines and boilers. In the end, it was decided that Montana would make do with a top speed of 28 knots, which would allow her to to manoeuvre with South Dakota and North Carolina-class ships.

The Yamato and the Iowa were often pitted against each other for the title of the “world’s strongest battleship,” but when one compares the specifications and the design concept, one can see that the Montana should have been Yamato’s true rival.

Construction of the Montana-class was authorised in 1940, but it was delayed because other ships were prioritised. Later on, even before the keel was laid, the Pacific War began, during which aircraft carriers proved to be a potent weapon at sea -- even more powerful than battleships. In view of the increasing obsolescence of battleships, the Montana-class were all cancelled, along with the plan to expand the Panama Canal.

The U.S. Navy naming convention was to name battleships after states in the U.S. Due to the cancellation of the Montana-class, Montana became the only state to not have a battleship named after it (excluding Hawaii and Alaska, which were not states at the time).

For personal use only. Unauthorized use or redistribution of the wallpaper is forbidden.