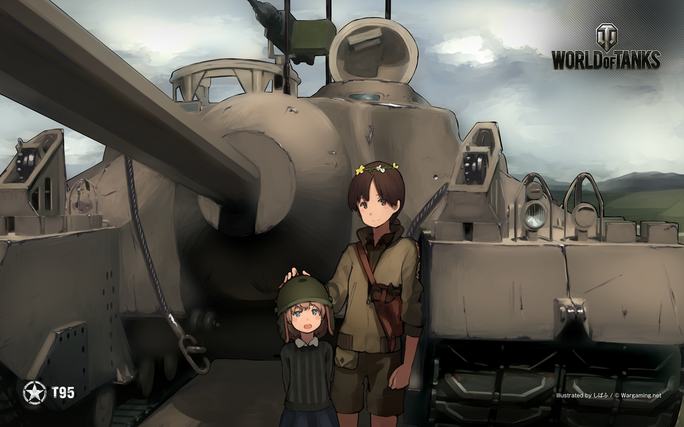 The fifth illustration features a menacing vehicle with a low profile and unique double track system: T95 (T28), an American tank destroyer! This vehicle was meant to besiege fortresses, so we placed it on a map that players would certainly be familiar with!

We prepared a wallpaper version, so feel free to decorate your desktop with the illustration of this beauty!

As World War II progressed and US involvement in the European theater became imminent, the US Army started developing heavy tanks. The M26 Pershing and the T29 were developed during this time, but a special vehicle with a little more punch was required to take on heavily fortified positions.

In March 1944, specifications were written for a low-profile, heavily armoured, and turretless vehicle mounting a powerful 105mm T5E1 gun, to be manned by 4 people. This was the T28 heavy tank. In February of the following year, the vehicle was redesignated the T95 GMC (gun motor carriage), since it was a specialised vehicle without a turret.

America’s industrial might was, however, busy meeting wartime demand. Since most major tank production facilities were already busy making other vehicles, the development and production was put in the hands of Pacific Car and Foundry Company (known as PACCAR today). But by the time the test vehicle arrived at Aberdeen Proving Ground, it was December 1945, and battles had long since concluded, even in the Pacific theater. The vehicle never saw action.

The T95 used the same Ford GAF V-8 gasoline engine as the T26 Pershing, but it was more than twice the weight of the Pershing, so the vehicle's speed was decreased to a crawl, at 13 km/hr. This speed was obviously inadequate for anti-tank battles, but this was a fortress-crushing monster with 12 inches (305 mm) of armour, so the lack of speed was not of great concern during its development.

More problematic, however, were the issues surrounding its treatment on paper. This was a weapon system beyond the US Army paradigm of the time. A “tank” was a turreted vehicle, and a “gun motor carriage” (tank destroyer) was generally a lightly armoured vehicle. This being the case, the heavily armed and armoured vehicle had no category into which it could fit. In June 1946, it was designated as the T28 heavy tank, but in the end, nobody wanted it.

In operational conditions, the vehicle needed another set of tracks to reduce ground pressure. The second set of tracks and road wheels with side skirts were put right next to the existing ones, and the extra set of tracks were removed and towed behind the vehicle when traveling on roads.

In World of Tanks, the T28 and T95 exist as separate vehicles, but historically, the names refer to the same vehicle.