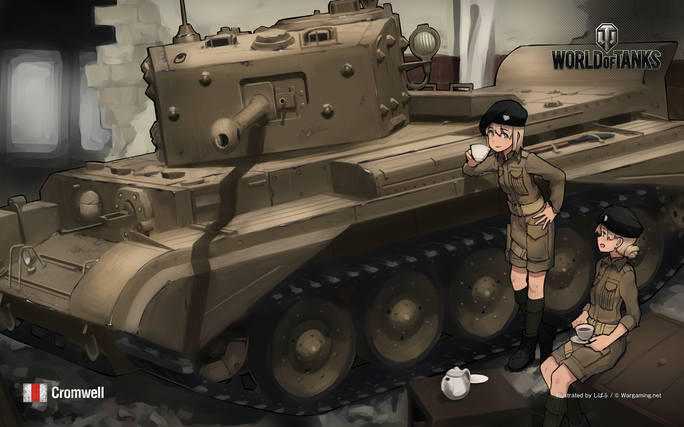 This fourth illustration is for a popular British medium tank, the Cromwell. This speedy tank was renowned as one of the fastest of its time... and of course, no illustration about the British would be complete without a nice, hot cup of tea!

We prepared a wallpaper version, so decorate your desktop with the beautiful picture!

At the beginning of World War II, British tank crews were constantly troubled by the rather inferior tanks they owned. When compared to the German counterparts, the British tanks were especially lacking in firepower. In response to this, the British quickly shifted the production from conventional 2-pounder to the more potent 6-pounder anti-tank gun.

The 57mm 6-pounder had the ability to fight on even terms with the German tanks, but the problem they had was deciding which tank to put the gun on. In one attempt, a 6-pounder was squeezed onto the Crusader Mk. III, but because the gun took up so much space inside the turret, the crew size had to be reduced from 5 to 3. This would render the tank ineffective in combat, due to a lack of manpower. A larger Cavalier tank was developed from the Crusader, but the Liberty engine was too weak for the purpose of mounting this new gun.

As a result, development began on a new tank design, designated "A27". The inadequate Liberty engine was replaced by the Meteor engine, a toned-down version of the famous Merlin aircraft engine. This new cruiser tank became the Cromwell.

Things did not simply go smoothly for British tank developers, however. There were not enough Meteor engines, since the manufacturers were too busy making engines for warplanes. As a stopgap measure, A27 hulls with Liberty engines were produced, but while all this confusion went on, the A27 chassis was sliding into obsolescence.

During this time, the 6-pounder was extended from a length of 43 calibres to a length of 50 calibres, and an improvement by Vickers allowed the Cromwell to share ammunition used by the American M4 Sherman. Such ammunition was abundant, and this made it logistically simpler to supply units using this tank. There were even varints that equipped the 75mm gun, which is the gun equipped in the illustration. Also, although there was a speed governor in place to protect the suspension, the Cromwell was one of the fastest tanks at the time.

Unfortunately, its development was not as fast as the tank itself. The Cromwell only reached the frontlines in 1944, and by then, M4 Shermans were plentiful -- the Western Allies were using the M4 as their main battle tank. The Cromwell was used by Reconnaissance Regiments. Before the vehicle could prove its worth, it was pulled from the frontlines. The Cromwell was a very capable tank, but remained a backup, never fulfilling its intended destiny: armoured cavalry charging to the rescue.

In World of Tanks, however, you can grant the Cromwell's dream of dashing across the battlefield and hunting down prey!