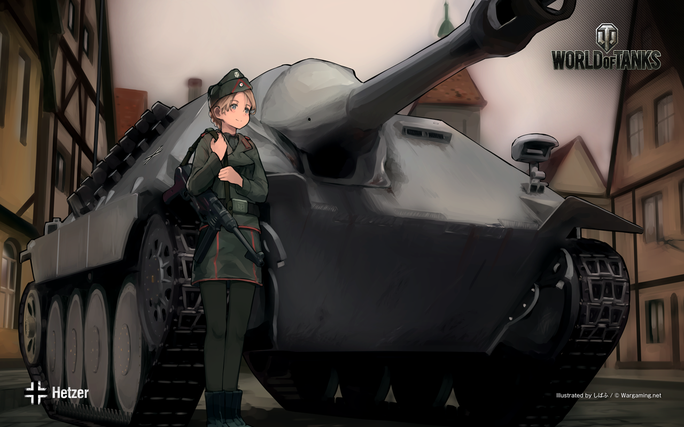 The second illustration is the popular in-game combination of the small but powerful Tier IV German TD Hetzer with the "10.5cm StuH42 L/28" !

We have prepared a wallpaper version, so feel free to decorate your desktop with this beautiful picture!

As World War II progressed and the battlefronts expanded, the German Army became overstretched and was constantly plagued by a severe lack of tanks. One of several measures adopted to meet the demand was the utilisation of older vehicle hulls in the production of self-propelled guns, as well as simplify existing tanks to make assault guns. These vehicles were never meant to completely replace tanks, but they worked well to fill the role of armour in units that lacked functioning vehicles.

The Hetzer was one such makeshift vehicle developed from the hull of the Pz.Kpfw. 38(t). The 38(t) hull already had a proven record as a chassis for self-propelled guns such as the Marder III, but the Hetzer’s unique construction mounted a powerful 7.5 cm Pak 39 L/48 gun in a simple boxy hull.

Although its shape was rather simple, the Hetzer faced many problems during the development phase. At first, it was developed as a 13-ton vehicle, but the hull was so small compared to the gun that the front end sagged a whole 13cm. The front suspension was enhanced to compensate for the weight at the front end and armor was added to the rear, but by then, the vehicle weighed 16 tons. The entire hull had to be redesigned. The Hetzer ended up being a completely new design, and could not able to make use of the existing production facilities for the 38(t).

However, when the production of the Hetzer started in June 1944, it went more smoothly than the production of other armoured fighting vehicles that Germany was producing at the time. Over 2,500 vehicles were produced, and the production continued even after the war. Towards the end of the WWII, Germany was fighting a two-front war, and this small yet manoeuvrable vehicle proved to be quite valuable, because of its firepower, which could destroy larger vehicles at close-ranges. The Hetzer was especially effective in urban combat, and was despised by Allied soldiers.

The popular variant in World of Tanks mounts the 10.5 cm StuH 42 L/28, the same gun found on the StuG III. This was a prototype tested in late 1944, but records only show that one vehicle was tested. There is another Hetzer variant that was produced in limited amounts. This version of the vehicle had an open top and mounted a sIG33/2 15cm heavy infantry gun.