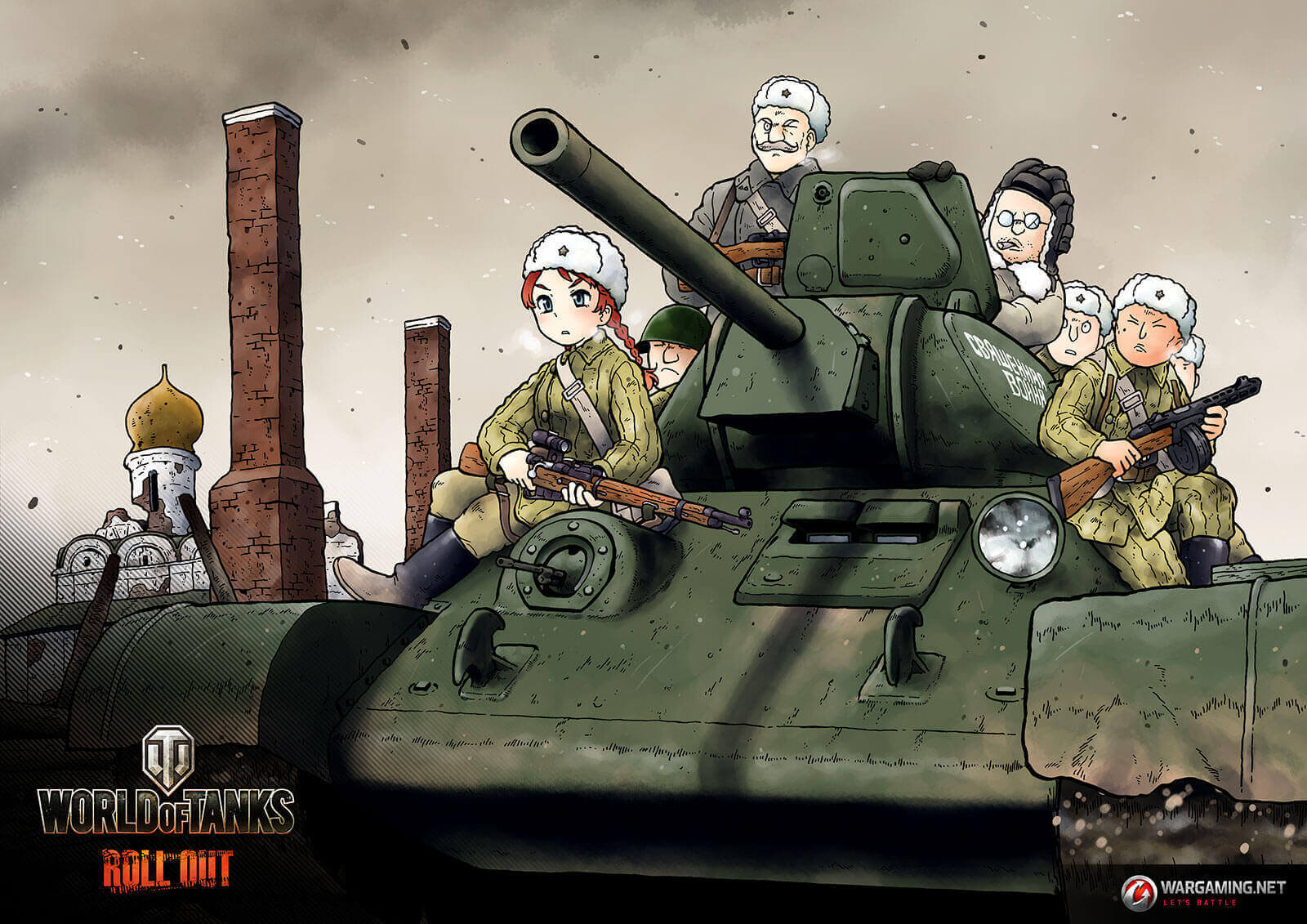 T-34/76 is a tank that makes men weep. I especially like the Stalingrad Tractor Factory model.

I drew this with the song “Священная война (Sacred War)” as the image. This is a song that represents the Great Patriotic War: it was composed only a few days after the German invasion of the Soviet Union, but it has a feeling of quiet determination that almost seems to foresee have foreseen the grueling battles ahead.

The song is used in great effect in films such as “Come and See” and “The Battle of Moscow.” It’s a great song, really.
It's also worth noting, the composer, Alexander Alexandrov, was also the composer of the National Anthem of the Soviet Union.

About the Artist - HAYAMI Rasenjin

HAYAMI Rasenjin is a comic artist known for the comic series illustrating military logstics in a humorous manner: "Guns and Stamps."

If there was a list of greatest tanks from World War II, the T-34 will undoubtedly be somewhere in the top. Technically, the later war 85mm turret version should be considered separately, but we will refer to these tanks as T-34 from here on.

You can see how ahead of its time the T-34 was by comparing it to its contemporaries. The T-34 weighed 26.8 tons, had a maximum speed of 54 km/h and mounted a long-barreled 76.2 mm tank gun and had a well sloped armor with 52mm in the thickest part. Compare this to the German Pz.IV Ausf. E at the time, with 21 tons, 42 km/h, 75mm short-barreled and 35 mm, and you can see how advanced the T-34 was. On top of that, the V-2 diesel engine was a pioneer in diesel tank engine, applied for use before the rest of the world. Rival tanks were using gasoline engines that hit the 300 h.p. wall, when the V-2 diesel could crank out 500 h.p.

This masterpiece, the T-34, did not come about by chance. Instead it was born through a history of development trial and error. The Soviets were interested in tanks from very early on. The mobility of tanks were perfect for defending the large nation that spanned from Europe to Asia. Under the lead of the Marshal of the Soviet Union and revolutionary hero Mikhail Tukhachevsky, the Red Army drove towards mechanization. The BT series cavalry tank and the T-26 light tanks were developed around this time. Although these tanks performed well in the Battle of Lake Khasan as well as confrontations during the Spanish Civil War, heavy losses from lack of protection became an issue. This became especially apparent in the Battles of Khalkhin Gol, where the Red Army was victorious, but the tank units took heavy casualties from infantry guns and Molotov cocktails, leading to voices for a stronger tank — a new medium tank with the speed of a BT-7 and the firepower of a T-28.

There were two plans to attempting to implement this: the first plan was to create an enhanced T-28 by adding a Christie suspension to it, and the second was to up armor and up gun the BT series design. It was the latter, led by the Ukrainian Kharkiv Locomotive Factory, which became the T-34. The former, after several twists and turns, evolved into the KV-1 heavy tank.

Due to political reasons, the KV-1 heavy tank was given priority in mounting the powerful F-32 gun, and so the T-34 medium tank initially developed with the 30-caliber length 76.2mm gun L-11. With the help of the Factory No. 92 in Gorky, a new 41.5-caliber length F-34 tank gun was developed and mounted on the T-34.

The development was completed in 1940, then the tank was produced at a rapid pace. By June 22, 1941 when the Great Patriotic War began, 1225 of them were built. This number was around 30% of the amount of tanks the Germans owned at the time. 700 tanks were sent to the front, and this was enough to hold back the German offensive. The tank regiments, however, were still newly formed and unprepared. The tankers were hodgepodge of inexperienced soldiers. On top of that they generally only got around 4 hours of training on the tank in the frontlines. There were often cases where only one battle worth of ammunition was provided, or a minor mechanical problem would render the whole vehicle unusable and abandoned on the field simply due to the lack of spare parts. And a lot of vehicles were lost without putting up a fair fight. Lack of tractors to recover such abandoned vehicles added to the chaos.

But, by the time the Germans reached Moscow, there were a sufficient number of well-trained tankers equipped with the T-34. By 1944, over 35,000 vehicles were produced, and they contributed greatly to the Soviet victory.