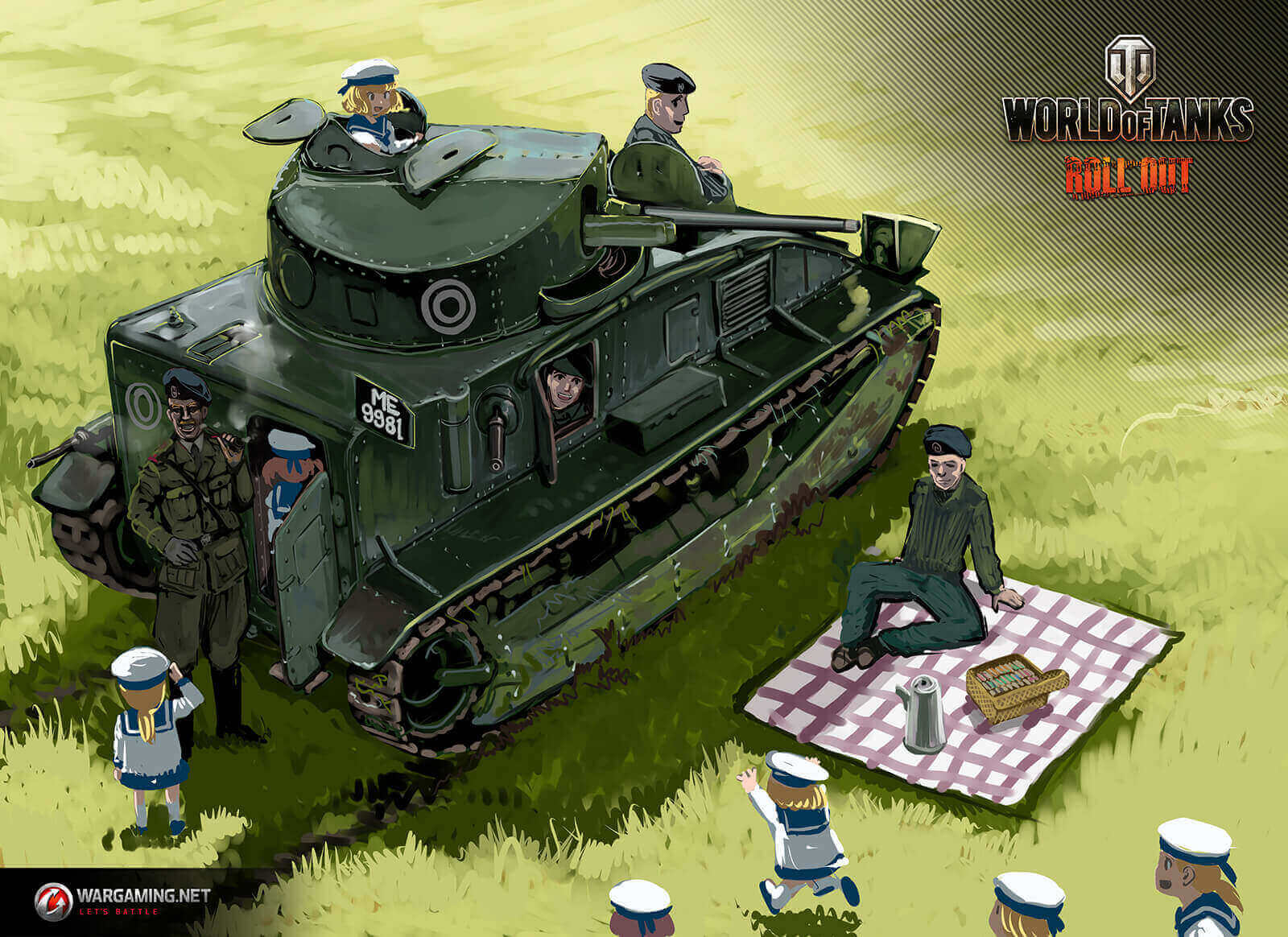 This is the Vickers Mk.II tank. I drew this tank in an episode of the “Moeyo! Sensha Gakko 7” (Moe! Tank School 7).  In the episode, I took up the story of the British tank development in interwar, centered around Col. J.F.C. Fuller, the “father of the tank doctrine” and his supporters who created the Vickers Mk.I. The Mk.II is an improvement upon the Mk.I.

To be honest, I was asked by the editor from Wargaming to “Draw a favorite tank from the game,” but my favorite tanks were either omitted or were already taken by another artist. It was lucky I found this tank.

Interestingly this tank has the engine in the front left, and because of that a hatch is placed on the rear. It kind of reminds me of the Israeli Merkava, an exciting little tank.

After World War I, this tank was born while military experts around the world were still making guesses at the future of the tank. And the interesting thing about the history surrounding this tank is how the British scrap their logical progress due to political bickering, leading to the difficulties in the initial stages of fighting in World War II. It is not a favorite tank, but I grew quite fond of it while drawing it in my comic.

Since this is an interwar tank, I drew this tank surrounded by little girls during an exercise. To the girls, this large metal monster is just another playground toy. And I think, this maybe a happier life for the tank as well.

About the Artist - Takeshi NOGAMI

The British Army experimented with various tank designs in the interwar period. Most of them were just a variations or improvements upon a previous design, and the Vickers Medium Mk.II was one of such vehicles.

Medium Mk.II was created by Vickers as an improvement upon the Medium Mk.I, created in 1924, and was produced as an alternative to the Mk.C tank. It was in production for quite a long time from1925 to 1934 with updates on the way. The main components such as the chassis, suspension and transmission were the same as the Mk.I, but the driver’s vision slit was moved from the front of the vehicle to the top of the driver’s seat, heavy slope was added to the rear of the turret and anti-aircraft capabilities were added to the machine gun, so the upper part of the hull was significantly changed. The suspension was strengthened, armor was added to protect it and a new clutch was adopted, but the engine remained the same so the speed decreased due to the additional weight of the upgrades.

Vickers Medium Mk.II was made to support the trench-crossing infantry as well as the expansion of the front. However, this all-round tank was expensive to produce, and it was not possible for the army to get a sufficient quantity. And so the British Army decided to divide the tanks by role to cut down the production costs, the former as the infantry tank and the latter as the cruiser tank. As these succeeding tanks grew in numbers, the Medium Mk.II was gradually removed from frontline service. The British Forces in Egypt were given the greatest number of Medim Mk.IIs, but even those were gone by the time the battles with the Italians began in June 1940. When the Germans got close to invading the British mainland, every last tank including the Medium Mk.II were gathered for the Home Guards, but in the end the Medium Mk.II never saw combat.

In the fall of 1941, however, the Finnish Army found several Medium Mk.II wrecks with their guns and engines removed near Vitele Station. These were simplified Medium Mk.II variants with the cupola and the cutout to allow the AA gun to elevate removed, and a cowled ventilator added. 15 of these were exported to the Soviets in 1931, and they were called the “English Workmen.” There are no records of the event, but maybe these were the only variants that saw action.

Since the Medium Mk.II was produced for a relatively long time, there are many variants. The Tier IV British self-propelled gun, the Birch Gun, is one of such variants. As a part of mechanizing the Army, a prototype was produced in 1926 to see the effectiveness of a self-propelled gun. However, the Mk.II mounted with a Ordnance QF 18-pounder was not enough to gain the attention of the Army, and the development was cancelled in 1929.