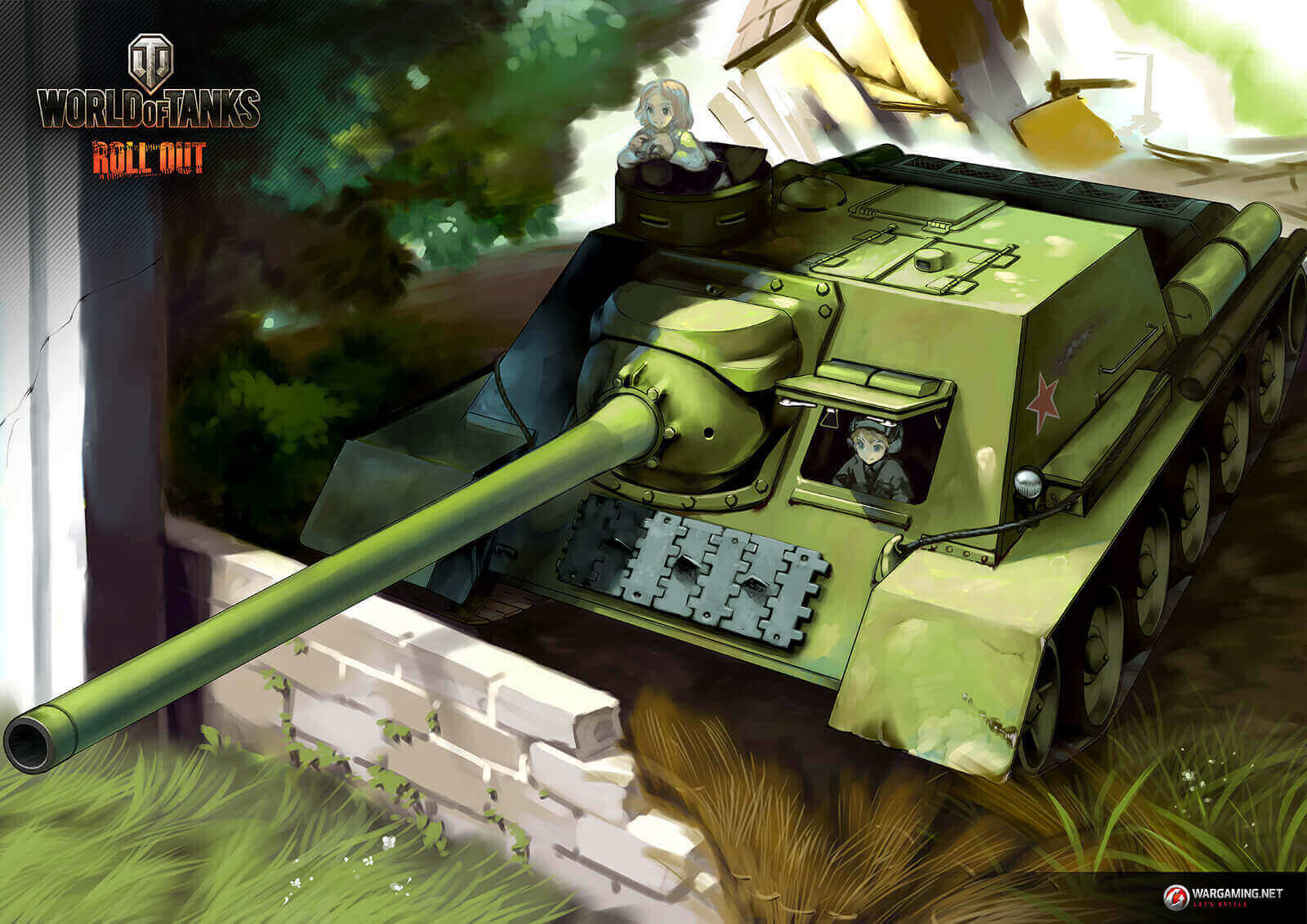 Which tanks do popular Japanese illustrators and famous manga artists like? You can find out in this illustration column “My Favorite Tanks,” where the artist presents us his or her favorite tank!

In part 8, one of the hottest rising military artists in Japan today, KUROKURO brings us his favorite tank destroyer, the Soviet Tier VI SU-100!

Don't miss the comments by the veteran tanker from before the dawn of the Asia server!

Tanks are my favourite war machines, and I’ve been playing World of Tanks since before the Asia server was created.

The PC I had back then had poor 3D performance, and there was often a slight delay before I could start moving even in the lowest graphics setting, plus there was the issue of not being able to communicate and coordinate due to the language barrier. But even with all the setbacks, I enjoyed moving about the battlefield on the SU-76 and lurking in behind small obstacles and sniping enemies.

This time I drew a favourite self-propelled anti-tank gun of mine, the SU-100. I fell in love with the SU-100 after seeing a white U.N. variant of the vehicle, and I bought a large plastic model of the vehicle and played with it in my youth.

I haven’t played for a while, since I’ve been busy with work, but I wish to use the opportunity to continue playing to get the SU-100.

The Soviet Army created a variety of vehicles based on the T-34 medium tank during World War II. Considering there were no such derivative vehicles in 1941, you might think these variations were created by copying the success of similar German designs, but that is not the case. The Soviets have caught on to the mechanization of the army very early on, and self-propelled guns have been in proposed since before the war. However, the research was halted during Stalin’s Great Purge, and the production of tanks were prioritized after the initial toll of tanks from the losses to the Germans.

Even in this difficult situation, the Soviets were able to develop the SU-122 during the spring of 1942, after successfully repelling the German advance in Moscow. The production began during the same year using the chassis of the T-34. It was just makeshift weapon with a box-shaped fighting compartment with a modified howitzer was mounted on the chassis, but it served the Soviets well when they desperately needed something to fight with.

The SU-122, however, was based on a Howitzer, so its anti-tank capabilities were limited. (Even in World of Tanks, the SU-122A is regarded as an artillery.) In 1943, the Tiger tank begin appearing, and from that time on the Germans make extensive use of heavy tanks. In order to counter these new threats, the Red Army saw a need for self-propelled gun with strong emphasis on anti-tank capabilities. In 1943, a self-propelled gun based on the 85 mm air defense gun 52-K, and this became the SU-85. (This is, of course, considered a tank destroyer in World of Tanks.)

The number after SU represents the caliber of the gun. It does not mean the SU-85 is less capable than the SU-122, because the number is lower. The SU-85 is able to fire a faster velocity AP shell, and so has better anti-tank capabilities. For around a year from August 1943. The SU-85 were produced by the Soviets. Around 2,335 vehicles were produced, and they served as a valuable anti-tank weapon for the Red Army.

A parallel effort was made to improve the gun on the SU-85, but it did not get very far, and the SU-85 was thought to reach the limit of its capabilities very quickly. And so, instead of trying to upgrade the SU-85, the Army decides to create a new self-propelled anti-tank gun based on the 100 mm naval anti-aircraft gun B-34. The OKB initially created the 100 mm gun S-34, but the size and the recoil if this gun was too large to be fitted on the vehicle without extensive modification. The Ural Heavy Machinery Factory tasked to create the self-propelled anti-tank gun had great difficulty, but plant number 9 managed to develop a more compact 100 mm gun D-103, and the development of the new self-propelled anti-tank gun was on track.

Since the SU-100 was based off the T-34/85, there was more flexibility in the design. The addition of the commander’s cupola created more room on the roof for a much needed ventilator. These upgrades improved the range of view from within the vehicle.

The thickness of the sloped armour was also increased from 45 mm to 75 mm. This improvement had a bigger impact than the cosmetic changes, but there was also bad news. The additional frontal armor and the 100 mm gun made the SU-100 rather nose-heavy. The suspension was under heavy stress, and so you can see many vehicles in existence today are leaning a bit forward because the suspension degraded by age.

Nevertheless the SU-100 was a well-rounded self-propelled anti-tank gun that packed a punch. It began seeing action in the last half-a-year of the war, so it did not participate any of the major tank battles. Their powerful guns were still a threat to the German heavy tanks they would occasionally face.

Following a brief interruption after the war, the SU-100 was produced up until 1956. It was also produced under a license at Czechoslovakia, and it was a popular weapon in the former communist bloc. It was a stable gun platform and a nearly perfected self-propelled anti-tank gun, and was welcomed in those states.