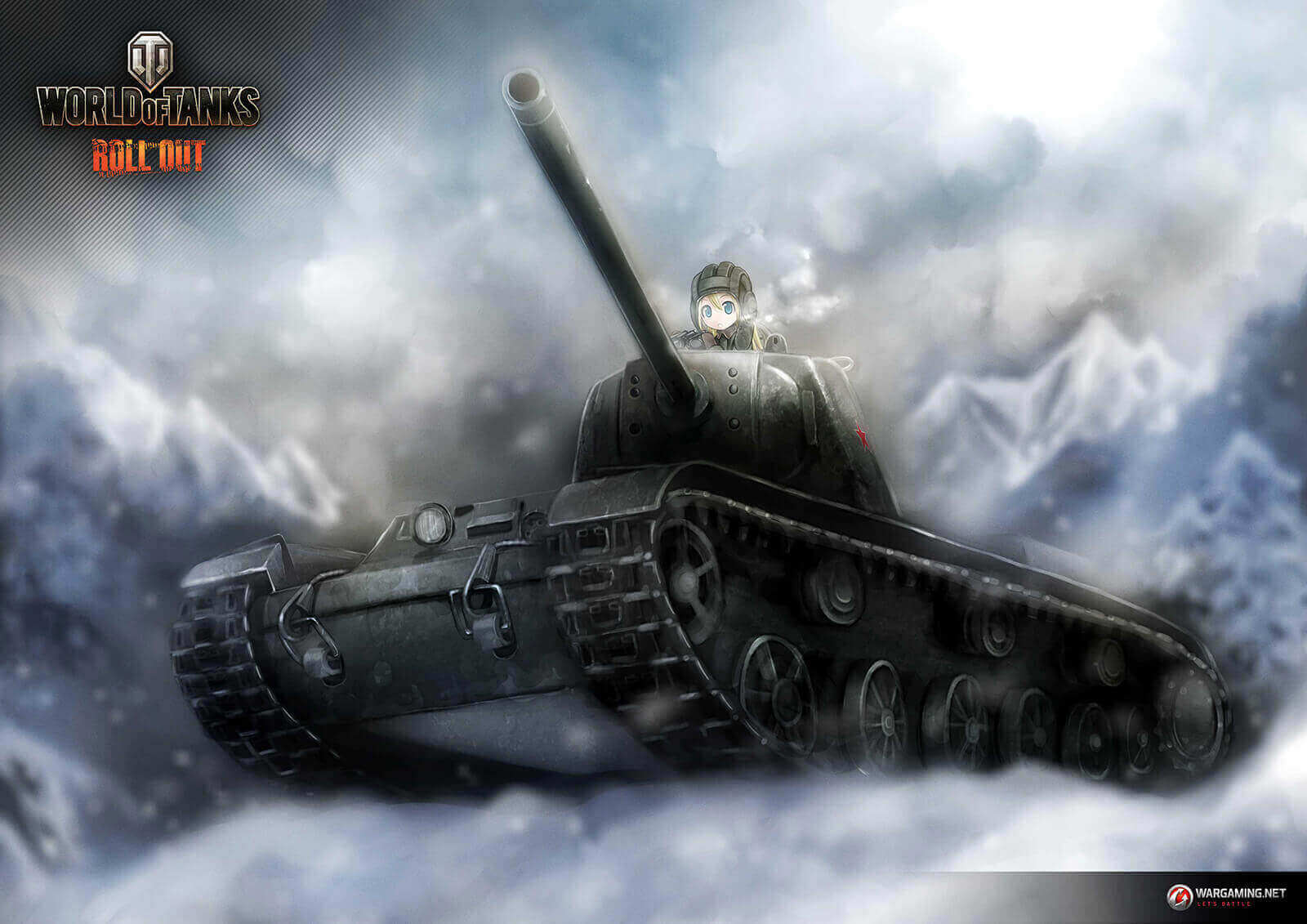 In part 7, illustrator KEI known for beautiful character artwork brings us the Soviet Tier V heavy tank KV-1! Why the illustrator for "Hatsune Miku" Is drawing a tanK? Find out in his comments!

Enjoy the illustration of the KV-1 in its natural habitat in the snow!

You might be thinking: “Why are you here, in this bunch of artists, of all places?” I’m wondering the same thing myself, I’m sorry..!

So, I started playing the game quite casually, but when I actually get into the game, it was actually quite interesting. I decided to go to the (Soviet) medium tank route for starters, but when I got to BT-7 at Tier 3, I suddenly hit a wall… the KV-1.
Literally being able to “tank” and bounce after bounce of shots… so wonderful!

Right now I’ve moved up the tier from the KV-1 and ride other tanks in the series like the KV-1S, KV2 and the IS as well. The KV-2’s 152mm howitzer is fantastic when you can land a hit! I’m nearing the IS-3, so looking forward to that, too.

About the Artist - KEI

KEI is an illustrator widely known for the designing  the characters for the VOCALOID2 Character Vocal Series, such as Hatsune Miku. He is an avid gamer and a fan of World of Tanks.

When you look just at the tanks built by the Soviet Union, it might be hard to believe that the Soviets was initially very behind other nations in tank development. Because of the communist revolution and chaos that ensued, as well as the diplomatic isolation, there just wasn’t the resources to develop a new weapon.

The Soviet Army’s struggle for a tank started by imitating the leading nation in tank development, the British. The A6 medium tank series as well as the Independent heavy tank were considered for copying. Under ordinary circumstances, the proper method would be to purchase the vehicle and produce it under a license, but the British were reluctant to provide technical assistance. And so, the Soviet Union decided to develop their own multi-turreted T-28 medium tank and T-35 heavy tank.

This was, in a sense, a technological victory for the Soviets, who were able to develop their own tank. In the 1930s, production began in limited numbers. Unfortunately for the Soviets, however, tank technology was advancing in leaps and bounds. The Soviets supplied tanks for the Spanish Civil War starting in 1936, but all Soviet light tanks back then were too lightly armored and were easy prey of the German 3.7 cm PaK 36. Even though it was not sent to the war, the prized multi-turreted tanks only had 30 mm of armor, so they probably would not have performed any better either. In 1938, the Soviet Army ordered its design bureaus to build a heavy tank that would fix the flaws of these previous designs.

At this point, the chief candidates were the T-100 tank designed by the Bolshevik Factory in Leningrad and the SMK tank by the Kirovsky Factory. Both tanks reduced the number of turrets from 3 to 2 and added additional armor to meet the requirements set by the army. The Kirovsky Factory, however, presented another single turreted heavy tank design that ignored the specifications provided by the army. This was the draft plan for the KV-1. The army gained interest in this tank, and by 1939 the final specifications of the KV-1 heavy tank were sent to the Kirovsky Factory for production, and by November an experimental vehicle was completed. Interestingly, the KV-1 was a single turreted vehicle, but it initially had a 45 mm coaxial anti-tank gun along with the 76.2 mm main gun. The Soviet Army gave up on the multi-turret idea, but they couldn't give up the multiple guns.

The debut of the KV-1 surprisingly soon after the completion of the experimental vehicle. In November 30, the Soviet Union started the Winter War with Finland, but contrary to what they expected, the Soviets experienced great difficulty in the War, and the newly designed heavy tanks was almost immediately put into action. Weighing 56 t, the T-100 soon showed itself too be too heavy to use, and the SMK also proved to be clumsy and difficult to handle. In contrast, the KV-1 was able to perform a rescue mission under heavy fire, and come back almost unscratched. From these results, the KV-1 was officially adopted for production. The 45 mm secondary gun, however, was dropped as it was not useful and taking up precious space in the turret. It was replaced with a coaxial machine gun.

The Kirovsky Factory was ordered to produce 50 of these vehicles per month by May 1940, and by the end of July, this was increased to 230 vehicles each month. In order to meet the sudden ramp-up, the design of the KV-1 was simplified. This is the KV-1 we see in World of Tanks. The 600 h.p. V-2K aircraft engine was powerful enough to power the 47 t heavy tank, but the transmission was rather unfit to handle the weight, and it became a vulnerability of the tank not easily apparent from the outside. In World of Tanks, you can use the tank to its full operating potential without worrying about the transmission or any of the issues faced by the tankers on the field.

When the Germans invaded the Soviet Union in June 1941, the KV-1 and the KV series tanks they faced gave them a hard time. There was no tank or anti-tank gun that could engage the KV-1 at a conventional engagement distance, and only the 8.8 cm anti-aircraft guns in direct fire mode could deal with the KV tanks. The Soviets had issues of their own: they did not have the maintenance facilities to sustain the KV-1, so when these tanks ran out of ammo and fuel, they eventually fell out of battle, and the tanks had to be demolished. The KV-1s could not fight to its full potential in the battlefield due to the inexperience of friendly soldiers.