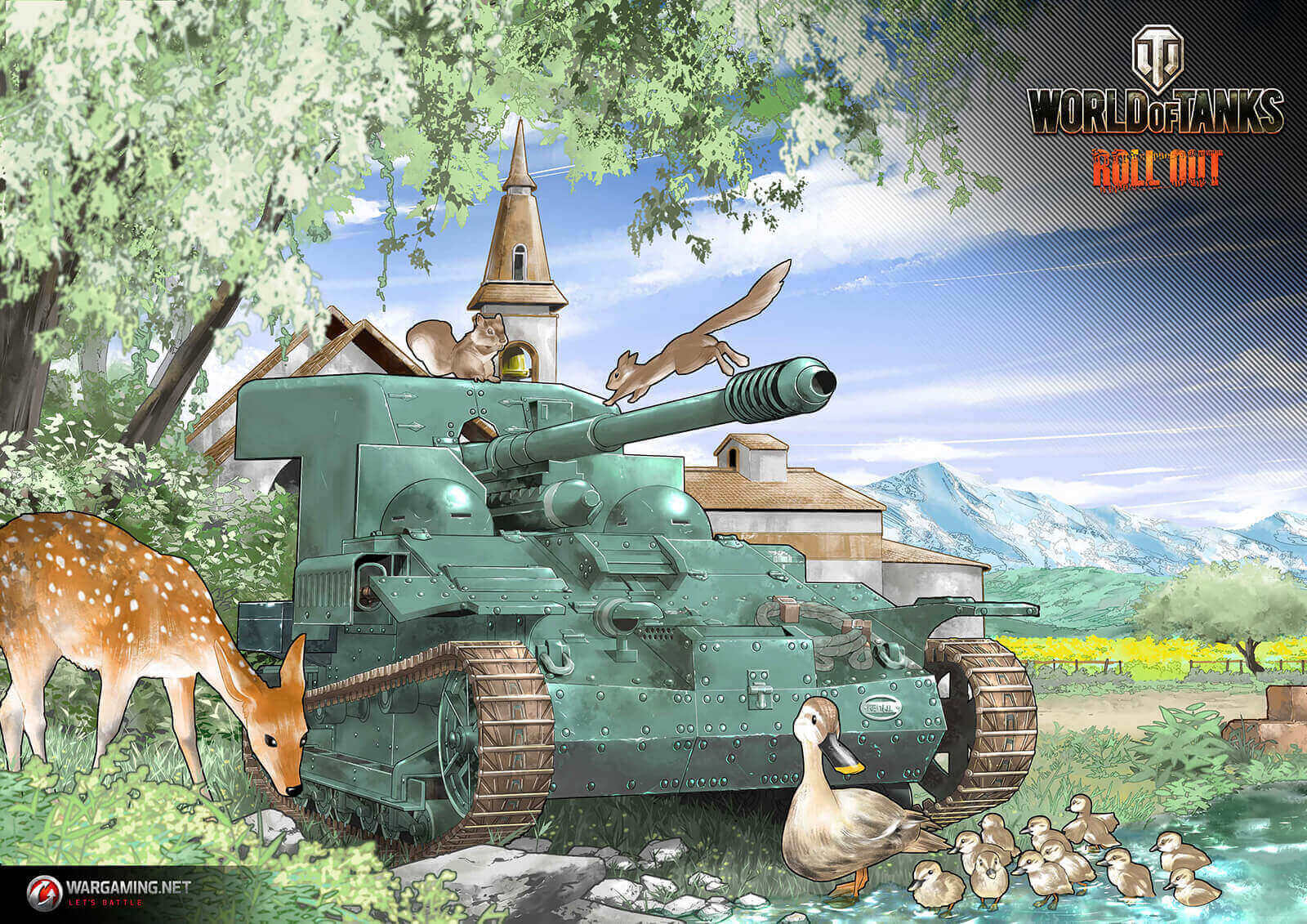 In part 5, artist Takashi Ino brings us a delicate illustration of the French tank destroyer "Renault UE 57" relaxing in a lakeside bush with animals.

I actually did not know much about tanks until I started playing World of Tanks. I’m pretty sure some features of the tank are slightly augmented to make the game balanced, but I never imagined that there were such a variety of tanks. I’ve gotten used to the game and now I can tell the difference betwen a lot of the tanks.

When I first saw the Renault UE 57, it was so small that I thought this was some kind of joke. When you put it next to a KV-1 or a Churchill, the vehicle’s small size stands out even more. I guess this also shows how “huge” an average tank is, something I’ve never really thought of until now.

But, it’s hard to think a crew of 4 fit on this thing. It’s smaller than some cars placed on the city maps. When I look at photos of the actual thing, I still see how small it is. The two semispherical domes on the center of the vehicle are to protect the head of the commander and the driver, which means even when inside the vehicle, their heads stick out. As for the gunner and the loader, they just sit on the back. Kind of scary to think of it... The Renault UE’s original use was for towing or carrying supplies. Only a protoype of this gunned version, UE 57, was built. I wonder how it would have been if it was really deployed in battle.

Even though it’s very compact, this thing weighs 2.79 tons, double the weight of a regular car, as expected of an armoured vehicle, I guess. For the reference, though, the heaviest tank built -  the Maus - weighs 188 tons, and the turret alone was 55 tons.

About the Artist - Takashi Ino

Takashi Ino is a manga artist that draws privately printed works with the artist group Bōkenyarō no Tom Sawyer.

After World War I ended, great powers around the world faced arms reduction due to budget cuts. Yet at the same time, the War made it clear that mechanization was the future of warfare, and it was critical to modernize the military. The solution to the low-budget mechanization adopted by armies was the “tankette.” Armies around Europe lionized the tankette, but France was uninterested at first, since they had over 1,000 Renault FT light tanks.

However, the French Army was haunted by the traumatizing experience of the trench warfare, in which countless lives of young men were lost, and by the late 1920s, there were voices calling for a tracked lightly armoured vehicle. In order to cross trenches to send supplies to forward infantry units, a tankette or a similar vehicle was thought to be crucial. And so, each manufacturer started building prototypes starting 1930, and the Renault’s “UE tracked armoured re-supply vehicle” was adopted. The UE tracked armoured carrier used the 36 h.p. engine on the Renault 10CV, was able to reach speeds up to 30 km/h on even surfaces and had a range of 100 km. The crew compartment held two personnel, and was protected by armour up to 9 mm thick. The stowage space on the rear could be opened, closed or tilted from inside the vehicle. Just as the required specifications, it could operate in areas full of shell holes and machine gun fire and safely provide supplies. You could see many influences from the popular British vehicle Universal Carrier, but it was more protected by armour on the top and additional protection for the crew’s head was provided by a ball-shaped hatch. There were plans to mount a machine gun and use these vehicles as light tanks, but due to the sectionalism of the infantry branch which was concerned that “these vehicles might be used as the equipment of the armoured branch,” this never happened.

By the time World War II started and France was defeated by Germany, over 5,000 Renault UE and upgraded UE2 carriers were built. Only around 3,300 were deployed and over 1,200 vehicles were left in the rear area. The Germans captured over 3,000 UE carriers and by an ironic twist of fate, these vehicles were used to support the German blitzkrieg offensive. A few of these vehicles were transported overseas, and they served as a valuable mobile force for the Free French. In May 1943, the Free French that lacking anti-tank weaponry experimented mounting a British 6-pdr. (57mm) gun Mk. IV on top of a UE carrier. This was the Renault UE 57 anti-tank self-propelled gun.

But it wasn’t much of a development, as it was just a 6-pdr. mounted on the stowage compartment. There was no fighting compartment and the gun had to be operated from outside the vehicle. It did add some mobility to the 6-pdr, but it also made the vehicle profile very high and there was not much merit compared to simply towing the gun. It was difficult to overcome the demerits, so in the end only 1 vehicle was produced and the plan was abandoned.