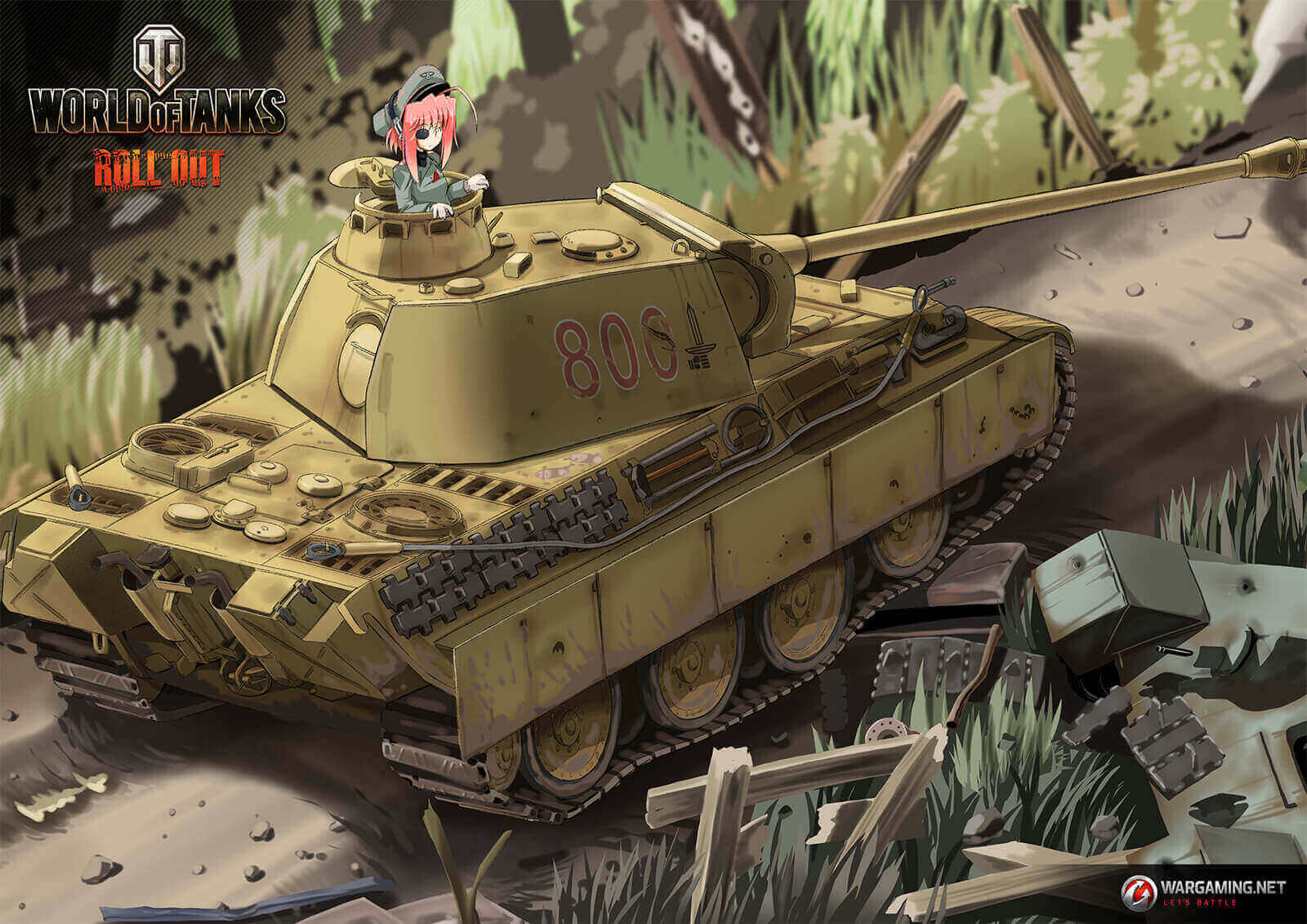 In part 3, illustrator EXCEL, known for cute characters and known for clued-up attention to small military details, draws us the German Tier VII medium tank Panzerkampfwagen V Panther Ausführung G, in what was virtually the final form of the Panther.

Due to the large angled armor layout, the vehicle looks a bit flat, and added to the fact that it doesn’t have the legendary reputation of the Tiger tank, the Panther tank feels a bit bland for what it is.

But when you look deeper into the vehicle, you’ll notice how it was created as the trump card for Operation Citadel, as well as the stereotypical German over-engineered suspensions and other mechanisms. There’s also the rivalry between the DB and MAN designs, and so this curious vehicle represents various facets of Germany and the struggles it faced at the time.

In terms of the illustration, I like drawing the rear of the tank since most of the smaller details like the engine grill screen and the gepäckkasten are in the rear. (This is especially true of the Panther, as there is very little on the front.) So I drew this piece from the rear.

I want to draw distinctive designs such as the gas turbine engine model at some point.

About the Artist - EXCEL

EXCEL is a military illustrator known for the contrast of military details and cute characters. He is known for drawing Bauer-chan in Dokusosen an book depicting the Russian Front in a comical manner.. He is also known for designing unique military merchandise such as a pillow in the shape of 7.5 cm KwK 37 APHE round.

The Panther tank is known as one of the best medium tanks in World War II, yet its creation actually shows the desperate strategic position Germany was placed in, in the later part of the War.

Until mid-1943, all German tanks were light-weight and maneuverable. The Pz.Kpfw III and IV, which formed the backbone of the panzer corps were a bit lacking in anti-tank capabilities, but they were generally suited for breaking through enemy lines and expanding the fronts. When, however, the German offensives begin to lose momentum and more defensive battles are being fought, there became a need to sacrifice some mobility and rely on heavier armor and firepower. This is what this Panther Ausf. D, which debut in the Battle of Kursk, was created for.

The production was rushed and the testing phase was omitted. And so the Ausf. D faces breakdowns in the crucial heat of battle. It was better than the Ausf. A, of which had an operating rate of only 20%. If proper testing was done, Ausf. D was a subtype that wouldn’t have been needed.

By 1944, the Allied military production surpassed that of the Germans in 1944, and the Germans made an effort to simplify the production process of the arms industry. The ideas for the Panther II were merged with the new Panther vehicles in production and became the Panther Ausf. G. In March 1944, and by late summer it was ready for battle.

The frontal armor of the Panther Ausf. G was 80mm rolled homogeneous steel. With 55 degrees of inclination, the effective armor thickness was around 145mm. The curved mantlet was also well protected, with 100 mm of armor, and most Allied tanks could not defeat the Panther from the front. The “shot trap” problem with Panther Ausf. A’s the mantlet deflecting the shot to the weakly armored hull top was solved with the addition of the “chin” on the later variations.

The sides, however, were relatively vulnerable with only 50 mm of effective armor, including the inclination. This was easily penetrable even by M4 Shermans using the 76 mm gun. The bustle on the side of the hull held the ammo rack, and a penetration here would have caused critical damage. Also, due to the lack of various metals and materials, some measurements have revealed the armor to be up to 20% weaker than it was designed to be.

Also, the powerful engine and the wide tracks gave the Panther decent mobility, on paper at least. The tank was originally intended to be 25 tons, and while the powertrain and suspension were not altered very much, the weight nearly reached 45 tons by the Ausf. G, so the powertrain components was a weakness of the Panther. The weakness in the legs would be critical for a predator such as the “Panther,” so this was an ill-fitting and ironic name for the tank.

As explained earlier, this tank is meant to use its well-protected frontal armor and shoot at enemies from outside their range, so if you are not doing well on this tank in World of Tanks, maybe you should change your tactics. In real life, by the time the Panther Ausf. G arrived in the battlefield, experienced tankers were scarce and Panthers crewed by inexperienced men would get easily outflanked and destroyed, so the Ausf. G was not very successful in battle, and you can find a lot of photos of Panthers destroyed in such manner.

In the game, though, if you keep researching the Panther, you can mount the Ausf. F Schmalturm (tight turret) as well as the monstrous 7.5cm KwK 45 L/100. Were the opinions on the Panther inflated? Or was it really one of the strongest medium tanks in the War? It might be fun to try to find out yourself in World of Tanks.