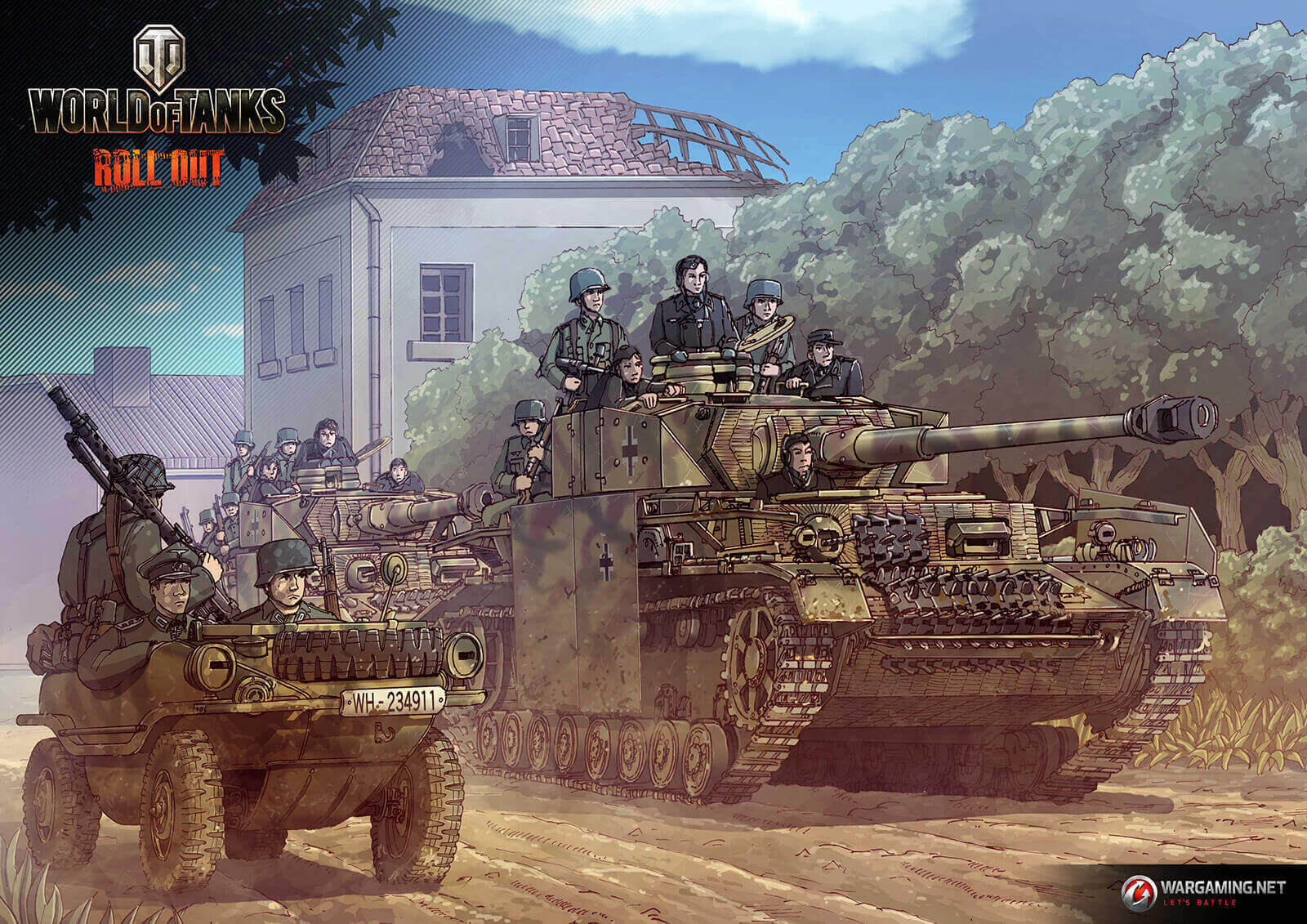 Which tanks do popular Japanese illustrators and famous manga artists like? You can find out in this new illustration column where “My Favorite Tanks,” where the artist presents us his or her favorite tank with an illustration and short commentary, along with a short overview of the vehicle by Tadamasa “Phalanx” Miyanaga!

This time military illustrator EARA SENSYA returns from the “Japanese Tanks in Illustrations,” to bring you the medium tank, Panzerkampfwagen IV Ausführung H (Pz.Kpfw. IV Ausf. H). Pz.Kpfw. IV served as the workhorse of the German Army from the early stages to the end of the WWII. The Ausf. H is a late variant with Schürzen skirts on the sides for additional protection from anti-tank rifles.

This time had the honor of drawing the Pz.Kpfw. IV Ausf. H.

The Panzer IV Ausf. H here is maybe going to face the Allies in the landing area, but the poor thing is probably going to get clobbered.

I like how the Panzer IV is jumbled with tiny parts. You can dress things up by putting lots of spare wheels and other tools.

You can sort of feel the life of a tanker through these details.

About the Artist - EARA SENSYA

EARA SENSYA is an illustrator that draws tank and other military vehicles on illustration SNS as well as publish privately printed works at comic conventions in Japan.

Pz.Kpfw. IV is the only German tank that was produced throughout the War. There are many variations to the tank, and it is also very popular in the game. I got a feeling of accomplishment when I finished researching the Panzer IV series on my game account.

Newly formed German Army lead by Hitler had high expectations for the mobility of panzers. It was actually the Pz.Kpfw. III that was expected to use its mobility to be the all-round tank, breaking through enemy lines as well as fighting enemy tanks. The Pz.Kpfw. IV was expected to support advancing infantry by destroying fortifications with its devastating 7.5 cm KwK 37. The job of the Panzer IV was to create an environment where the Panzer III could concentrate on its job.

But when the Battle of France started in May 1940, the Panzer IIIs struggled against the French tanks, often not being able to damage them at all. The 3.7 cm KwK 36 tank gun was already rendered obsolete by the heavily armored French tanks.

Pressed for a better offensive capabilities, the German Army attempted to strengthen existing tanks with better guns. The 5 cm KwK 39 L/6 as well as the 7.5 cm L/34.5 and L/40 were tested, but these were, again, inadequate against the Soviet T-34, which started showing up around this time. In early 1942, 7.5 cm Pak 40 L/46 for the assault gun was considered, but the overall length, caliber length, the ammunition were all too big for the Panzer IV’s turret, and a more compact 7.5cm KwK 40 L/43 was created. The tank the mounted this was the Panzer IV Ausf. G. (It was initially mounted on the Ausf. F vehicle, and these are sometimes called Ausf. F2, but the name was unified to Ausf. G during production.) In May 1942, these tanks fought their debut battle in North Africa, and before the M4 Shermans started to show up en masse at the El Alamein the Panzer IV Ausf. G was the strongest tank around. The Ausf. G was also able ot deal with the T-34 and KV-1, and the German Army used its superior tactics to destroy many Soviet tanks with this vehicle.

The enhancement of the Panzer IV, however, did not end at the Ausf. G. From April 1943, Panzer IVs with The 7.5 cm KwK 40 L/48 began being produced. This was the Ausf. H. The 7.5 cm KwK 40 L/48 was also mounted on the Ausf. G produced during the same time, so the difference between the only really notable difference between the early Ausf. H and the late Ausf. G is the new cast sprocket wheel and final drive. The Ausf. H continued getting upgrades, such improved front armor layout, and by February 1944, 2,300 vehicles of the type were produced.

By the way, there exists a final production version of the Panzer IV, the Ausf, J, but the Ausf. H was without doubt the better tank. The Ausf. J removed the electrical turret drive and the auxiliary generator were removed and a fuel tank was added in the place to increase the operational range. Because of this, the turret had to be traversed manually, and the combat strength of the vehicle as a tank declined. The Ausf. J basically turned into tank destroyer with a turret that has the ability to rotate.