75 years ago, British forces holding the strategically important port of Tobruk was besieged by a German armoured force led by the "Desert Fox" himself, General Erwin Rommel. Although most of the British forces had retreated to the Egyptian border, they left part of their army in Tobruk in order to deny Rommel clear lines of communication as he advanced towards Egypt. In order to advance without worrying about disruptions, he would have to seize Tobruk first.

In order to relieve their besieged comrades in Tobruk, the British put together Operation Crusader. In the ensuing battle, British forces broke Rommel's momentum and showed that the Germans could be beaten, but it did not spell the end of the Desert Fox's legend. Let's take a look at how German and British armoured forces fought in the desert!

1941 was a dramatic year for North Africa. Early in the year, the Deutsches Afrikakorps arrived with orders to defend Tripoli and Tripolitania. Facing them was the British Western Desert Force, who had just defeated the Italian 10th Army and seized control of Cyrenaica as part of Operation Compass. In response, the Axis launched Operation Sonnenblume with a small, elite motorised force under Rommel’s command and claiming their first victory in the North African Campaign. However, the Axis forces failed to occupy Tobruk, a crucial harbor in North Africa and instead laid siege to it while the bulk of the British forces retreated to the Egypt-Libya border.

Oberkommando der Wehrmacht ordered all forces in the North Africa Theatre to adopt a defensive stance, because Hitler's attention was focused on the upcoming Operation Barbarossa (the invasion of the Soviet Union). Any operations that did not complement Barbarossa would only serve to divert precious resources, and were thus given low priority.

Meanwhile, German Forces in North Africa were renamed and reorganised. Oberkommando der Wehrmacht established Panzergruppe Afrika, which consisted of both the Afrika Korps and Italian forces. Their commander was Erwin Rommel, who had recently been promoted to Generalleutnant (Lieutenant General). Now, Rommel had two panzer divisions under his command: the 15th and 21st Panzer Divisions, of which the latter was newly redesignated from the 5th Light Division. The main forces of these 2 divisions, the 5th and 8th Panzer Regiment, remained as they were previously structured, with 1 medium tank battalion and 2 light tank battalions. In order to meet standards set for tank units in April 1941, the Inspector General of Armoured Troops designated 1 additional light tank battalion for each regiment. Now, each regiment had 1 medium tank and 3 light tank battalions. 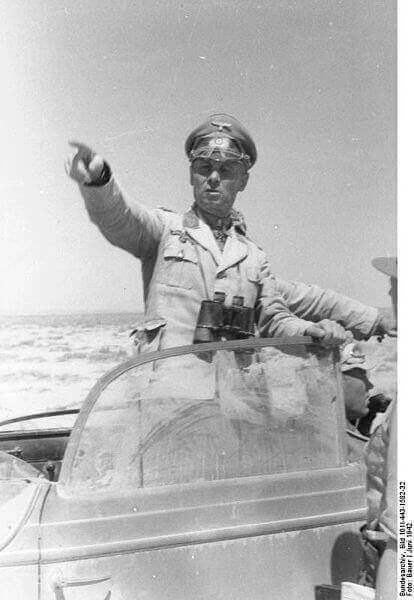 General Rommel, also known as the Desert Fox, was the commander in chief of Panzergruppe Afrika during Operation Crusader.（BA）

By this time, Germany's tanks had been modified based on desert warfare experiences from the first half of the year. Panzer IIIs, which were the backbone of the German Panzer divisions, were all equipped with 5cm L/42 main guns which performed well against armour. Also, these tanks were shipped to North Africa equipped with special adaptations for desert terrain such as cooling, ventilation, and air filtration systems. These were the Panzer III Ausf. L TP, where TP stood for "Tropen", the German word for "tropical".

Reorganisation of the British Forces

On the other hand, after the British forces had been forced to retreat from Libya as a result of Operation Sonnenblume, they sought to avenge their defeat. For the Commonwealth, North Africa was their first priority in the Mediterranean. British Prime Minister Winston Churchill believed that before the United States of America could enter the European Theater (an intervention that was sorely needed), they had to only place where the Allies could counter-attack was the Mediterranean Theatre. First, Sir Claude Auchinleck was appointed as Commander-in-Chief of the Middle East. Then, the Western Desert Force was redesignated the Eighth Army, under the command of Lt-Gen. Sir Alan Cunningham. Their main mobile strike force was the famous 7th Armoured Division, better known as the "Desert Rats". 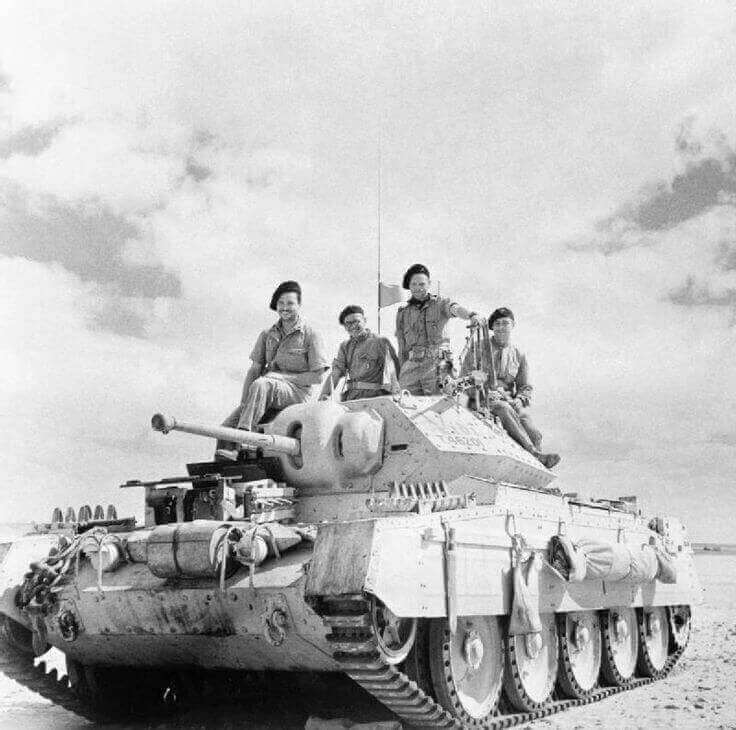 The Crusader cruiser tank was first used during Operation Crusader.（IWM）

The British Forces also renewed and replenished their tank reserves, and American-made vehicles finally arrived. The British Forces came to be widely equipped with the American M3A1 Stuart Light Tank. The 4th Armoured Brigade of the 7th Armoured Division was re-equipped with these light tanks, which were characteristic of American tanks. They were reliable and easy to operate. The British tanks crews fell in love with them immediately, nicknaming them "Honey".

The M3A1 was a highly manoeuvrable light tank, but she could not play the tactical role of main tanks due to lack of fire power and armor. Another new tank was the British Crusader cruiser tank, which the 4th Armoured Brigade of 7th Armoured Division was equipped with. Operation Crusader was also named after this tank. The British Forces had high expectations of this new vehicle, but unfortunately, the characteristics of this tank did not provide the British with many advantages on the battlefield. 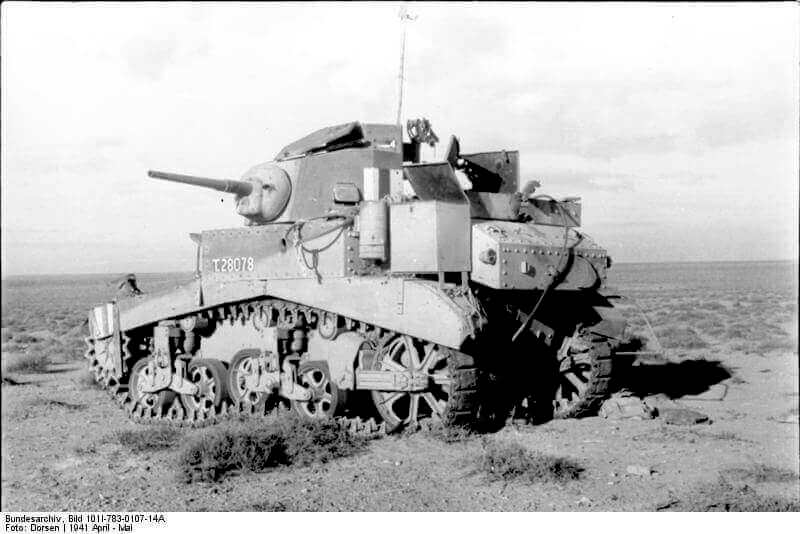 The British expected the Eighth Army to defeat Panzergruppe Afrika and lift the siege of Tobruk in Operation Crusader. The British attempted some long-range manoeuvres from the south, directed at the rear of the German-Italian Panzer Corps outside Tobruk. This was intended to threaten the rear of the Axis defensive lines, while the besieged British troops in Tobruk advanced. It was hoped that this pincer attack would eliminate the Axis forces in the Tobruk region. The 7th Armoured Division and an infantry division of the British XXX Corps were to make a long-range flanking manoeuvre; 2 divisions of XIII Corps were push the front to contain the Axis Forces.

On the Axis side, the 90th Light Division of the German army and 3 divisions of the Italian army held the siege line of Tobruk. Mobile strike forces (in the form of the 15th and 21st Panzer Divisions) were also on standby in an open area, ready to engage enemies from any direction. A small group of elite troops also held Halfaya Pass on the Egypt-Libya border, limiting the usage of the coastal road.

On 18th November 1941, the British 7th Armoured Division advanced from Fort Maddalena in the south, entering Libya. The British took the Germans by surprise and remained undetected by the Germans until they reached Gabr Saleh. However, the British did not concentrate their armoured units and instead pushed from three directions. None of the three pushes made any decisive progress.

On the left flank, the British were defeated by Italian forces in Bir Gobi; on the right flank, the British were beaten by the 21st Panzer Division in a tank battle and forced retreat to the southwest after losing several tanks. The British only made any progress in the middle, pushing their way up to the Sidi Rezegh, located south of Tobruk. The defense force in the Tobruk also attempted to break out of the siege, according to plan.

Over the next two days, Panzergruppe Afrika carried out a series of mobile counter-attacks, inflicting severe losses on the British. The Germans also nearly annihilated the South African 5th Brigade and severely damaged the British 7th Armoured Division. The breakout attempt in Tobruk also failed. However, these battles had also cost the Germand dearly.

Rommel’s Rush to the Border

After the battle of Sidi Rezegh, the 15th Panzer Division, 21st Panzer Division, and Italian Divisione Corazzato Ariete of the Axis Forces congregated on the battlefield to finish off the remaining British Forces, particularly the British 7th Armoured Division. However, Rommel changed his mind.

Instead he ordered these 3 divisions on a long-range manoeuvre to the southeast, heading to Sollum on the Egypt-Lybia border. Rommel expected that this would cut off the British supply lines behind and push the remaining British Forces in Lybia to the edge of collapse. 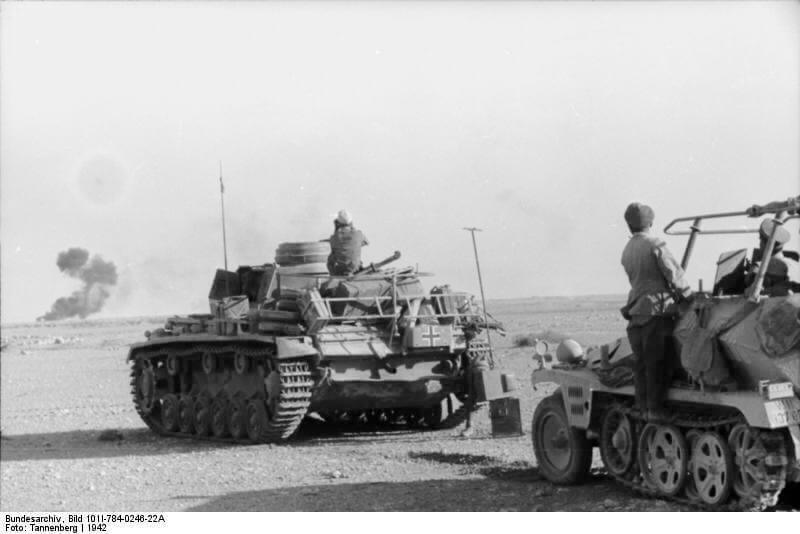 German crew watching the battle far away on a Pz. III command tank. Behind it is a Sd.Kfz.250 armored car.（BA）

Rommel nearly succeeded. The British field commander, Lieutenant-General Alan Cunningham, lost his nerve when he found German-Italian armoured forces behind his lines and ordered all the British Forces to retreat amidst chaos. However, Commander-in-Chief Middle East, General Claude Auchinleck, stepped in. He was determined to hold fast and stopped the retreat of the British Forces, instead ordering them to attack the Germans. He sacked Cunningham shortly after, and Major-General Neil Ritchie relieved him as commander of the Eigth Army. 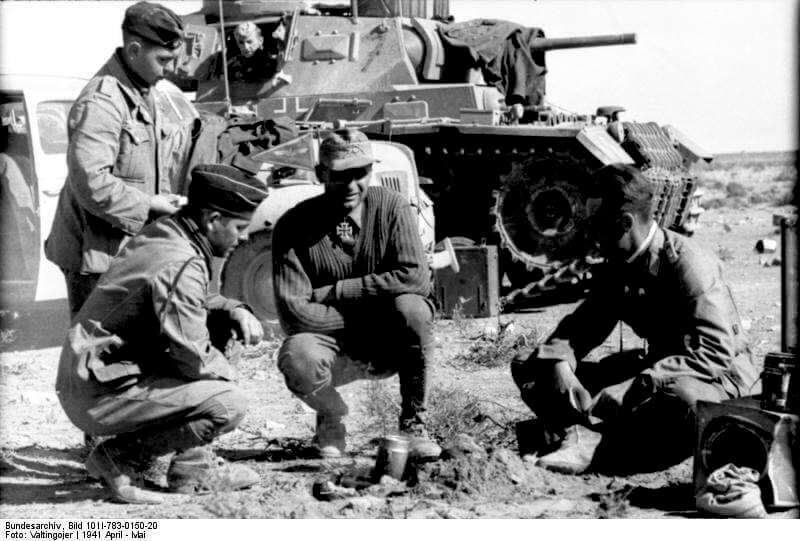 Captain Kümmel was the commander of 1st battalion of the 8th Panzer Regiment. He led German tanks charged in th Battle of Sidi Rezegh.（BA）

Now, with the situation in favour of the Commonwealth Forces, Rommel had little recourse but to order the 15th and 21st Panzer Divisions to retreat and reinforce Tobruk. Although German and Italian armoured units fought and defeated the 7th Armoured Division in the open area south of Tobruk, Rommel could not regain control of the battle.

Aware that success was slipping from his grasp due to logistical issues, Rommel retreated farther west from Tobruk to keep lines of supply and communication shorter and more manageable. Under the cover of the 15th and 21st Panzer Divisions, the Axis forces gradually retreated to the Gazala Line. However, once there, they found the British preparing to flank them. In the face of this threat, the Axis forces had no choice but to retreat to Agedabia.

And so, Tobruk came to be free of Axis control. Tobruk was saved, and British turned out to be the winners of Operation Crusader.