As winter set in during the Battle of Stalingrad, the surrounded and starving German 6th Army awaited defeat and capture. In order to lift the siege, the Germans initiated "Operation Winter Storm" in an attempt to turn the situation around.

However, despite their efforts, they were unable to lift the siege. The Battle of Stalingrad ended with the capture of the entire 6th Army. Read this article to learn the full story of Operation Winter Storm!

Der Kessel (The Cauldron) - The Siege of Stalingrad Overturned

On 19th November 1942, the Red Army launched Operation Uranus, attacking the flanks of the German 6th Army and surrounding them in Stalingrad. They pressed the supporting Romanian 3rd and 4th armies holding up the flanks, and the Romanian fronts quickly collapsed. The German 6th Army was completely surrounded, and the hunter had become the hunted. Hitler refused any requests for permission to break out of Stalingrad, instead ordering the 6th Army to hold fast in "Fortress Stalingrad".

This was an impossibility. The 6th Army badly needed supplies. They lacked winter equipment, because Stalingrad had been expected to fall quickly. Soviet resistance had been stiff, and the Soviets were better able to supply their troops. The Luftwaffe attempted to resupply the 6th Army by air-dropping supplies, but the operation was unsuccessful. The 6th Army's supply situation in Stalingrad worsened. Rations were cut repeatedly, and so desperate were they that they were forced to consume even the horses that they had brought with them. Hungry men were not good fighters. Attrition was quickly taking an increasing toll on their strength. If they were to relieve the 6th Army, they had to move quickly, or else there would be nobody left to save.

Generalfeldmarschal Erich von Manstein, a masterful tactician, was appointed to the Southern Russia Theatre as the commander of Heeresgruppe Don [Army Group Don]. Hitler ordered Manstein to relieve the trapped 6th Army and salvage the situation. To achieve this objective, Hitler transferred the 6th Panzer Division, then resting in France, to the Eastern Front.

They were to lead the way for Operation Winter Storm. This is their story. 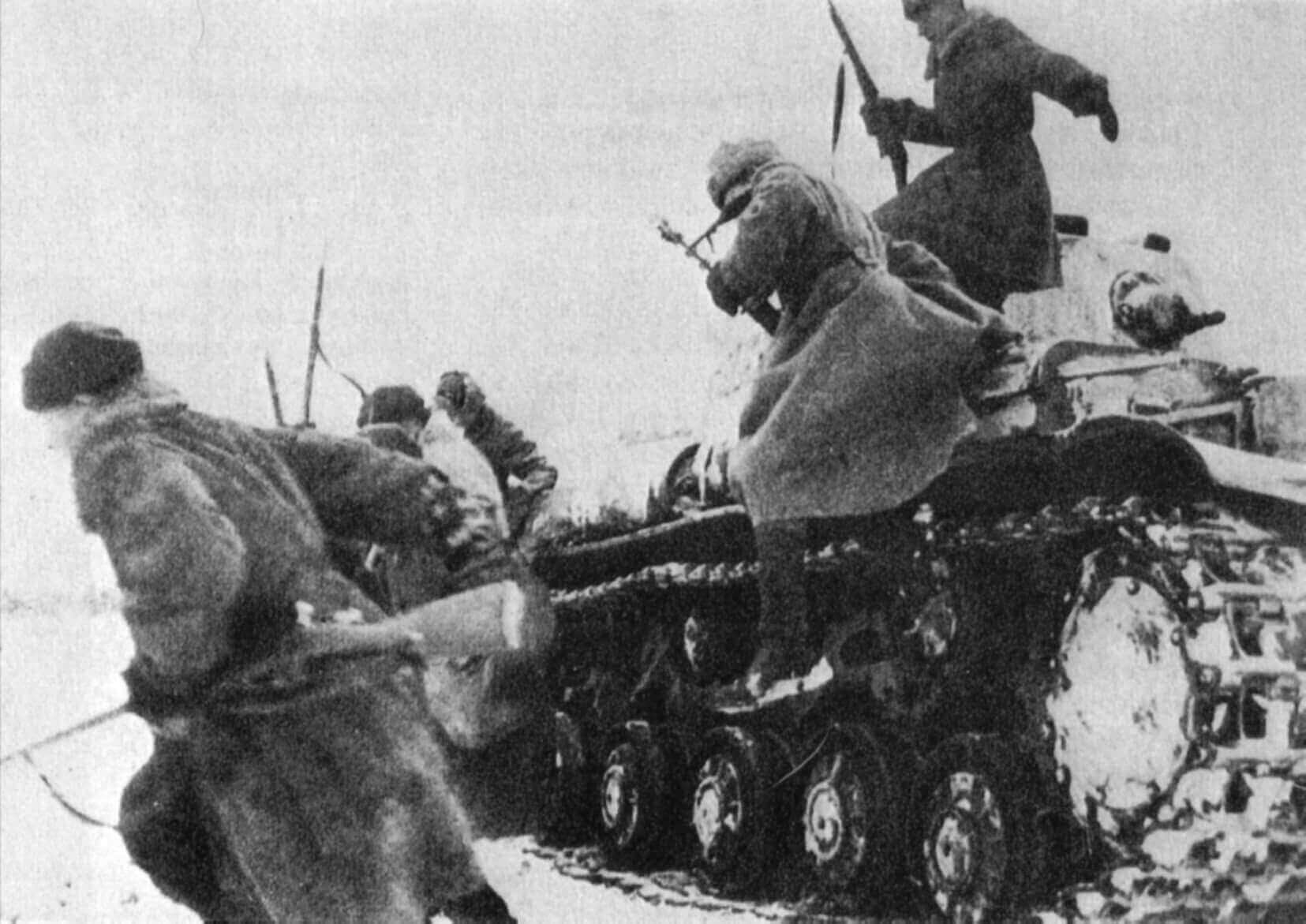 Red Army infantry jumping from a KV-1 heavy tank as they enter combat.

The Wehrmacht's 6th Panzer Division participated in Operation Typhoon, in the winter of 1941/42. They were one of the German units that had been at the gates of Moscow, where they suffered severe losses. After the end of the battle of Moscow, they were taken from the front lines and sent to Bretagne, France, to rest and resupply.

The 6th Panzer Division was redesignated from the 1st Light Division. The 11th Panzer Regiment, the main armoured unit in this division, was equipped with Panzer 35(t)s captured from the Škoda factory in Czechoslovakia (“t” means "Tschechisch", which means "Czechoslovakian" in German). It had proven its reliability during the early days of the war. However, its main armament, the 3.7 cm KwK 34(t) main gun, was out of date. It was inadequate when used against the Red Army’s T-34 medium tanks and KV-1 heavy tanks. Now, however, German tanks would replace those Panzer 35(t)s. German tank crews were happy about this. 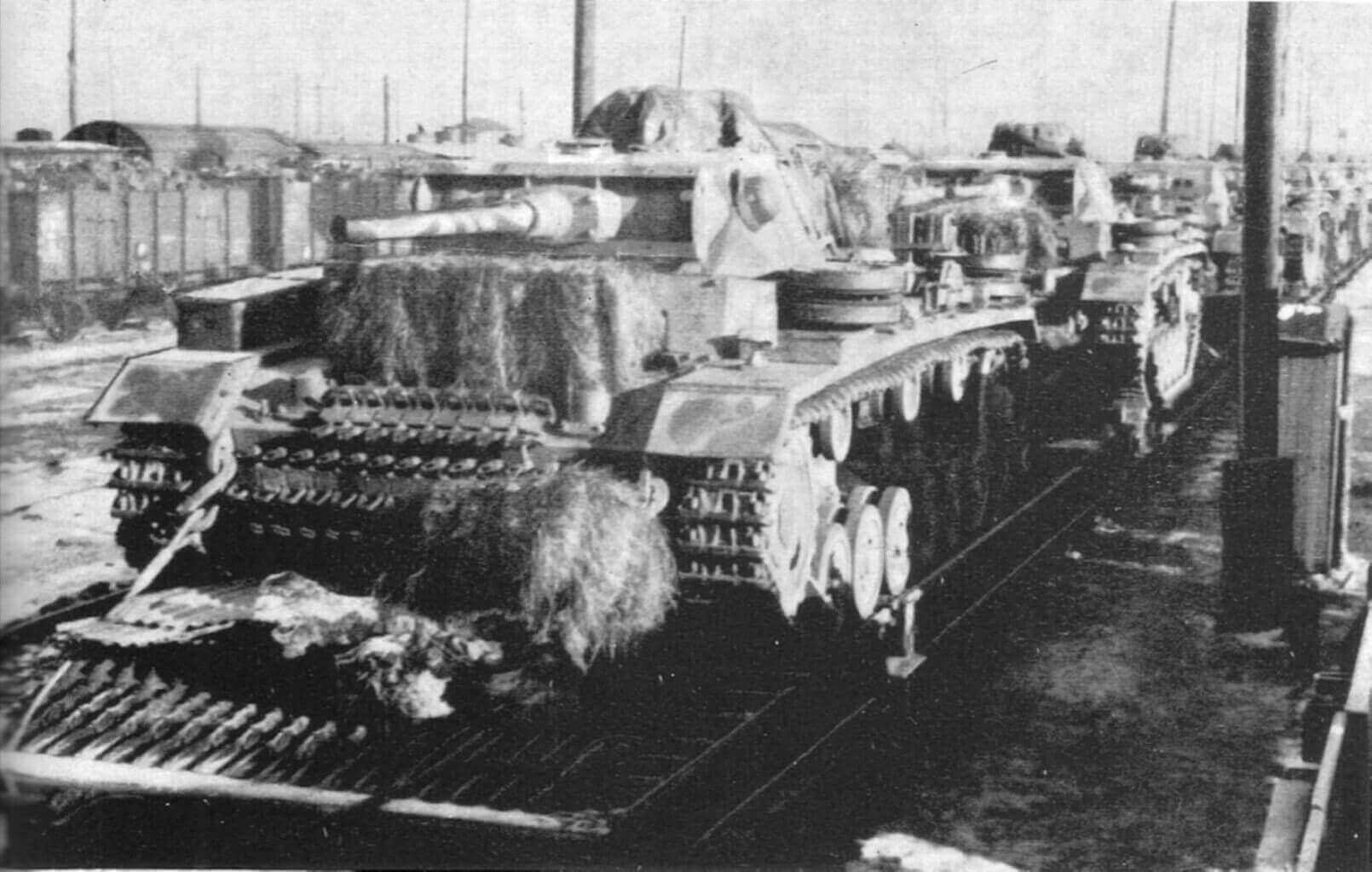 German 6th Panzer Division transferred from France to the southern section of the Eastern Front. Here are several Pz. III Ls being transported by railway.

After spending almost 6 months in France, the 6th Panzer Division received winter equipment and antifreeze, and were ordered to prepare to return to the Eastern Front in early November. They departed southern France through west Germany, passing Berlin and heading east.

They first saw snow as they entered the Oder River area. And soon enough, their train arrived in the Russia steppes. When they arrived in southern Russia, they heard news of the siege of Stalingrad. Every man in 6th Panzer Division immediately assumed that they would be fighting there.

Similarly, the 6th Army had heard of the coming relief effort. Even on one-third rations and rapidly running out of supplies, they held fast and fought hard. "Der Manstein Kommt!" was the thought that kept them going.

Operation Winter Storm had to be postponed several times because reinforcements were late. However, time was running out for the men in Stalingrad. On 12th December, 1942, the 6th Panzer Division advanced with the 23rd Panzer Division covering their right flank. The assumption was that the 6th Army would fight their way towards them while they advanced.

However, that was where their advance halted. It was there that they encountered large concentrations of Soviet armour and infantry. The Red Army had redeployed them from Stalingrad to stop the German relief effort. The 8th Cavalry Corps, 3rd Motorised Guards Cavalry Corps, and other Red Army units clashed with the 6th Panzer Division. On 15th December, 200 German tanks clashed with 400 Red Army tanks on the plains of Verkhne Kumskiy. The 6th Panzer Division fought well at the beginning of the battle under the command of the 11th Panzer Group’s commanding officer Oberst von Hünersdorff. However, in the face of the Red Army's massive numbers of tanks, their advanage meant very little. Both forces duked it out to exhaustion, and then retired from the battle. 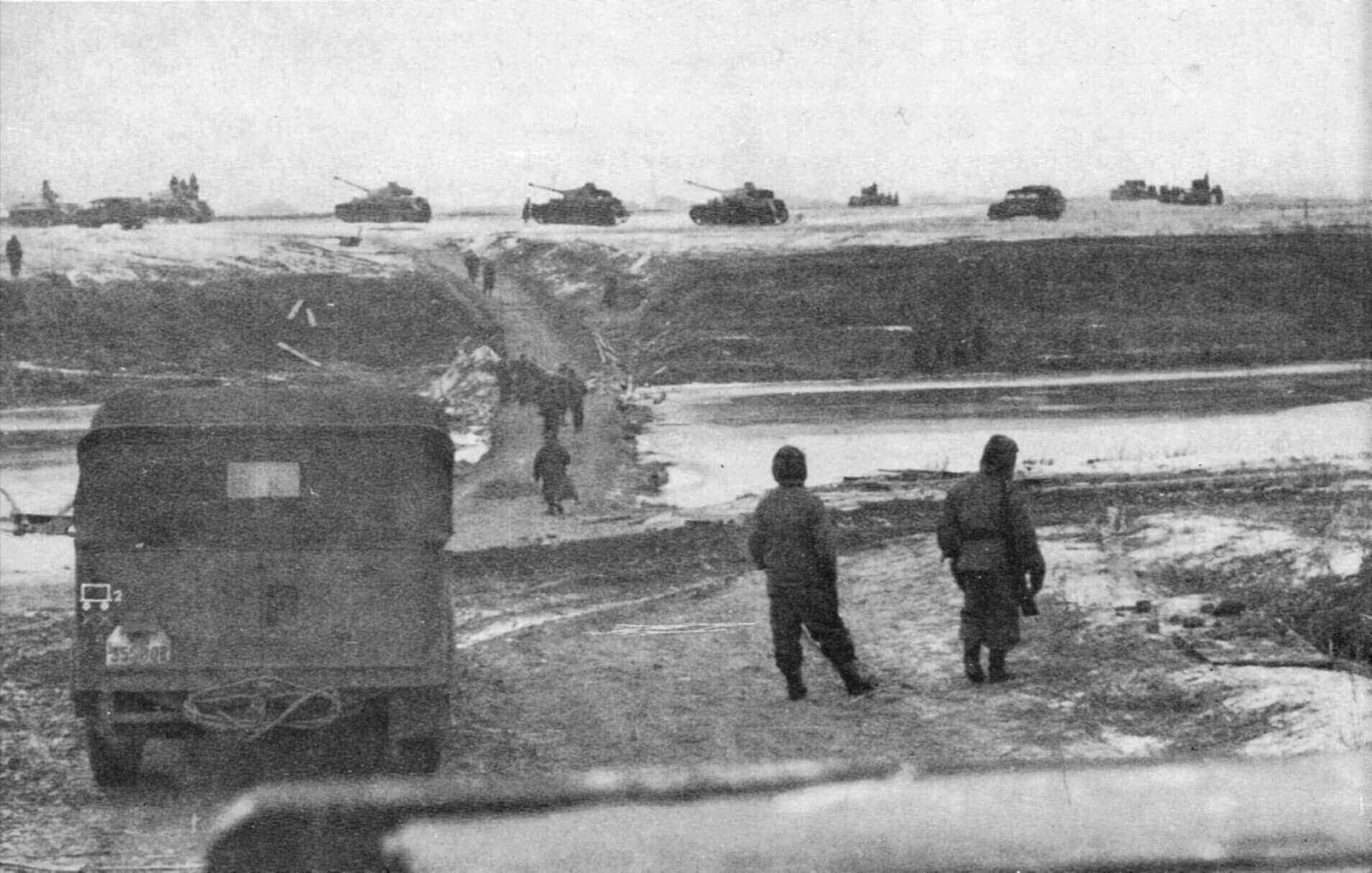 The Vanguard 11th regiment, 6th Panzer Division pushed to the river Aksai on the first day of the offensive.

48km away from Stalingrad

Up until this point, the LVII Panzer Corps had advanced about 60km in the first week of the attack. Most of this distance was covered within the first 2 days, before then they became bogged down by the Red Army near Verkhne-Kumskiy. This did not bode well for the relief effort. Fortunately, the 17th Panzer Division reached the battlefield on time. After a series tough battles, the Hünersdorff Group finally broke through the Red Army's defensive line on 19th December and occupied a bridgehead near the Myshkova River in a bold raid.

From this position, there was no obstacle between them and Stalingrad. The LVII Panzer Corps was only 48km away from the surrounded 6th Army. It had been agreed that once the rescue units were close enough, the 6th Army would be given the agreed signal, "Donnerschlag" (Thunderclap) and fight to break out of the encirclement.

There was just one problem. The Hünersdorff Group at the Myshkova River was a force consisting mainly of tanks. There were very few infantry; Kampfgruppe Zollenkopf of the 114th Panzergrenadier regiment was 30km behind the Hünersdorff Group and still trying to fight their way out; the 23rd and 17th Panzer Divisions were fighting their way out along the 6th Panzer Division’s flanks.

In other words, the Hünersdorff Group could not move before reinforcements arrived. However, being the first German elements to reach this area they were most likely to encounter the Red Army in combat. Hünersdorff Group gradually expended their ammunition, and they could not acquire supplies. The situation grew critical... but fortunately, Kampfgruppe Zollenkopf arrived in the afternoon on 20th December and made contact with the Hünersdorff Group.

At this juncture, Manstein and Friedrich von Paulus (commander of the 6th Army) were in contact. They discussed the possible alternatives available, and Manstein attempted to get Hitler to approve the breakout, but he could not be reached, and even then, he had never shown interest in allowing a breakout. 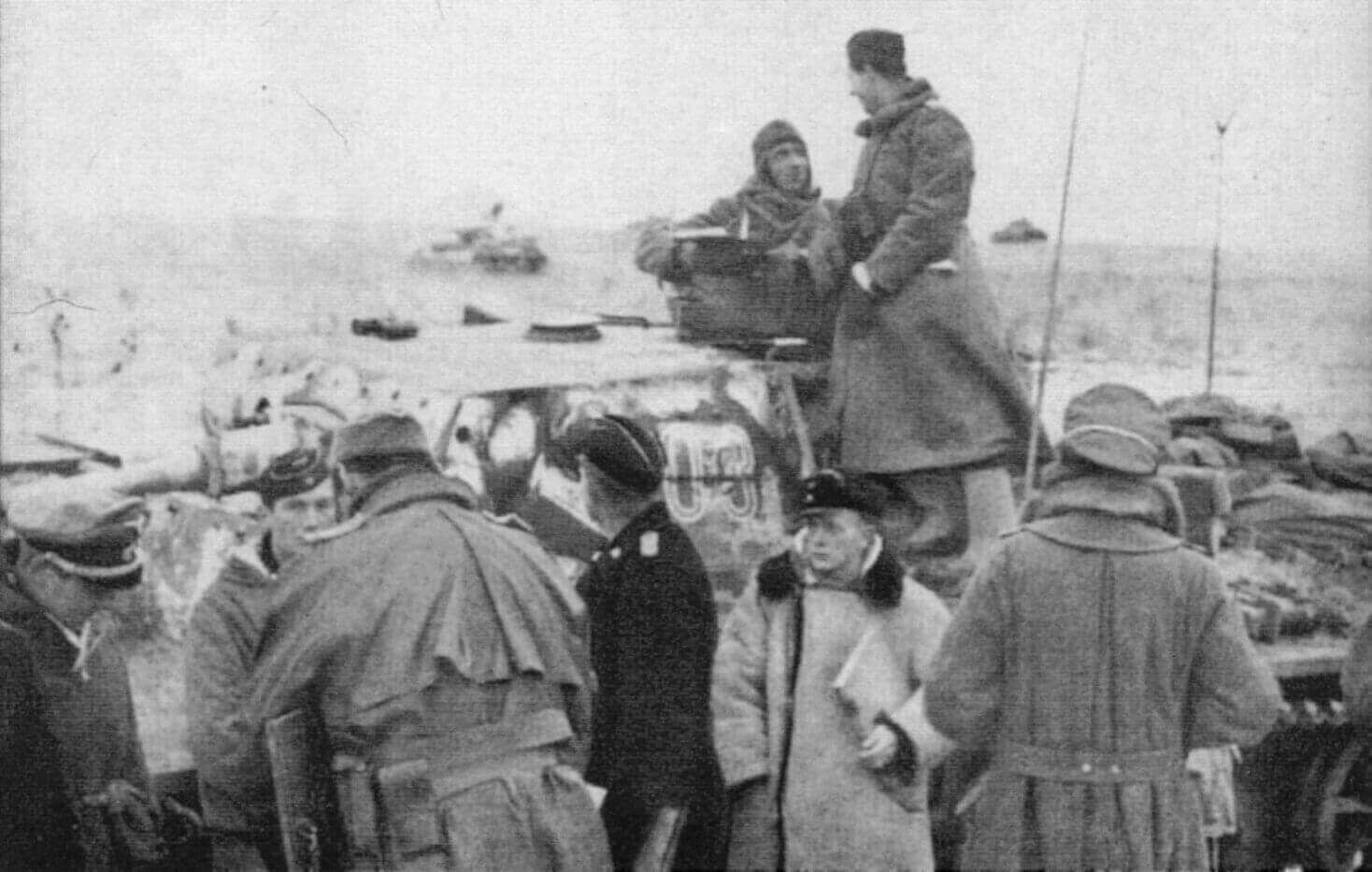 17th December 1942, von Hünersdorff (in the commander's seat) discusses the combat situation with other officers.

In the meantime, however, the Red Army launched another offensive on the Chir River Front to the north. The 8th Italian Army stationed there fled immediately. The defence line was now non-existent, and the Red Army flooded into the rear of the Axis positions. They had lost their only opportunity to break out, rendezvous, and escape intact.

The situation changed dramatically. The commander of Heeresgruppe Don issued a painful order: 6th Panzer Division was to pull out and deal with the Soviet attack coming from the north. Effectively, the Germans had given up any attempt to rescue the 6th Army, which was still trapped at Stalingrad. On 23rd December, the 6th Panzer Division left their positions and advanced to the north.

The 6th Army was doomed. Somebody was coming, and it was not a friend. It was a massive and well-fed Soviet army.

On 2nd February 1943, having starved for months, the 6th Army was forced to surrender. Of the 330,000 Axis troops trapped in Der Kessel at the beginning of Operation Uranus, over 90,000 soldiers were marched into Soviet POW camps. Only 5,000 would return home after the war.

A major turning point of WW2 had come. 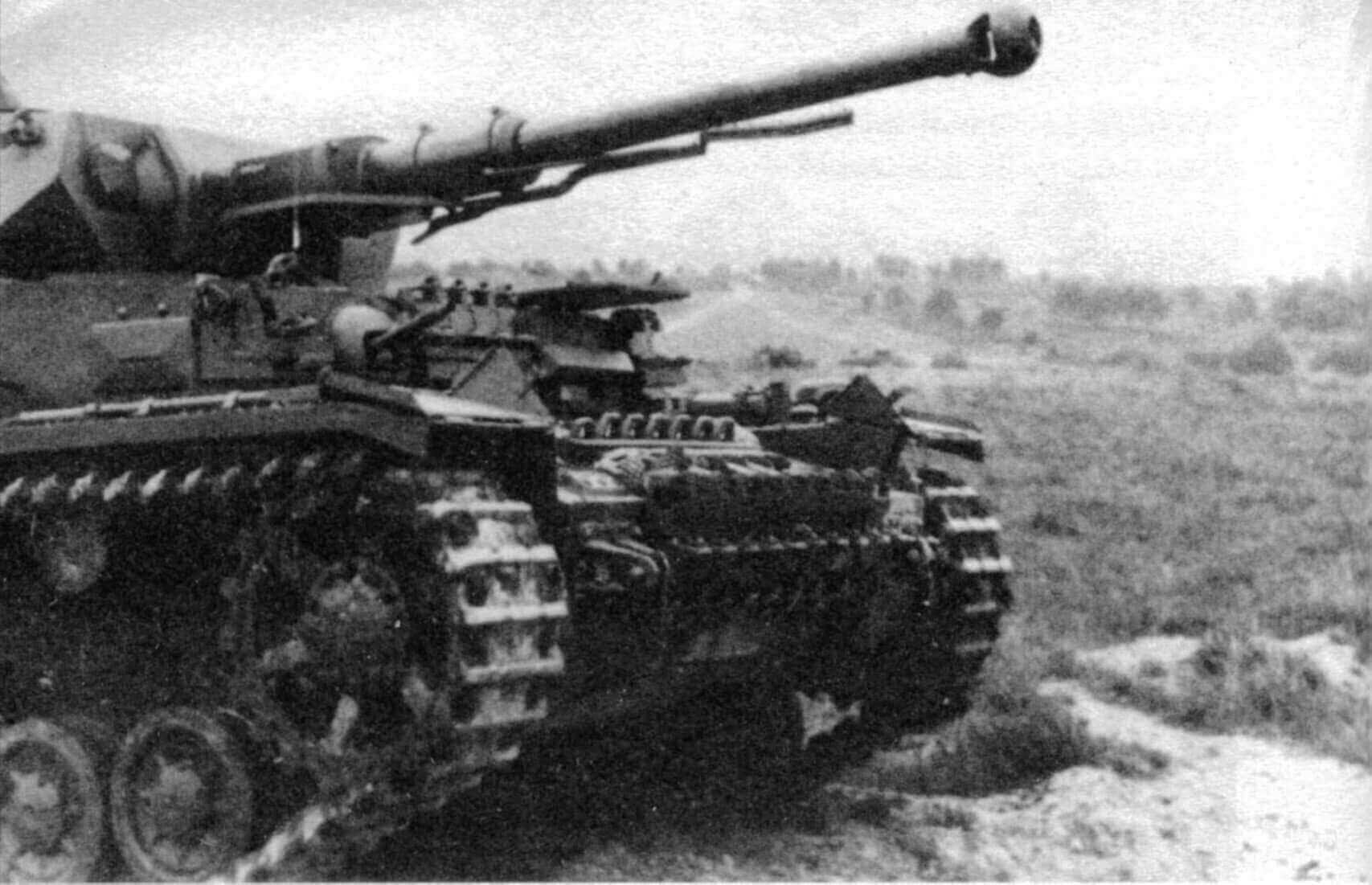 The Pz. IV F2 with the 7.5cm/43 tank gun was the mainstay of German armoured units until the appearance of Panther tanks.

The author is a professional military researcher. Photographs used do not belong to the author. The author has built up a large collection over a long career in this field, and many of the photographs were given to him by colleagues and veterans.