We're ready to introduce a new iteration of changes to the Common Test!

Join it to try out the long-awaited Steel Hunter mode, featuring a fresh map, three new vehicles, and many other important changes. We’re also reworking Combat Reserves in Strongholds to provide you with more tactical opportunities.

Plus, after Update 1.17 goes live, World of Tanks will host a new Season of the Recon Mission mode. It will kick off in June and will be available for preliminary testing during the second Common Test of Update 1.17. We'll share more details in a dedicated publication later, so stay tuned!

Our Battle Royale mode is returning to World of Tanks! Steel Hunter 2022 received the largest series of complex changes since its release and will now be more exciting than ever. Here’s what you can expect:

1. The Huragan (Poland), a versatile medium tank that plays a more defensive role.

2. The Bái Láng (China), a speedy tank that serves best as a scout.

3. The Beowulf (Sweden), a perfect vehicle for attacking and hunting.

The mode's economy was completely reworked to include Steel Seals, a new in-game currency that you can use to rent powerful event vehicles. Your earnings in Steel Hunter will depend on the amount of damage caused, as well as the number of damaged modules and destroyed opponents. The higher you place in the post-battle ranking, the more Steel Seals, credits, and Combat XP you earn.

Plus, Steel Hunter will now have a permanent bonus to credits and Combat XP from WoT Premium Account and allow you to earn 50% more Steel Seals.

But that’s not all! When playing in the mode, you’ll be able to take advantage of:

Note: Steel Hunter's economy during the Common Test is not final and will be further adjusted after testing.

In the new Season, three out of eight event vehicles—the Varyag, the Raven, and the Arlequin—will always be available by default. The remaining five tanks will be available for rent. You can rent each of them for free for the first time, and each subsequent rental will cost you a few Steel Seals. You will earn them in battles, depending on your place in the post-battle ranking.

During this Common Test, you can also try out the reworked Combat Reserves in Strongholds. Instead of two reserves with a similar effect—Airstrike and Artillery Strike—only Artillery Strike will cause damage. Airstrike, in turn, will be renamed Inspire and become a tactical Reserve. It will improve the crew performance of the vehicle and of all allies within its radius, like in Frontline. The higher the level of this Reserve, the greater its radius and effect will be.

You will be able to take two Combat Reserves of different types into battle. The creator of the room can keep both Reserves and give them to any clan member or distribute them among different clanmates. In this case, one of them will become Gunner and the other will be Inspirer. 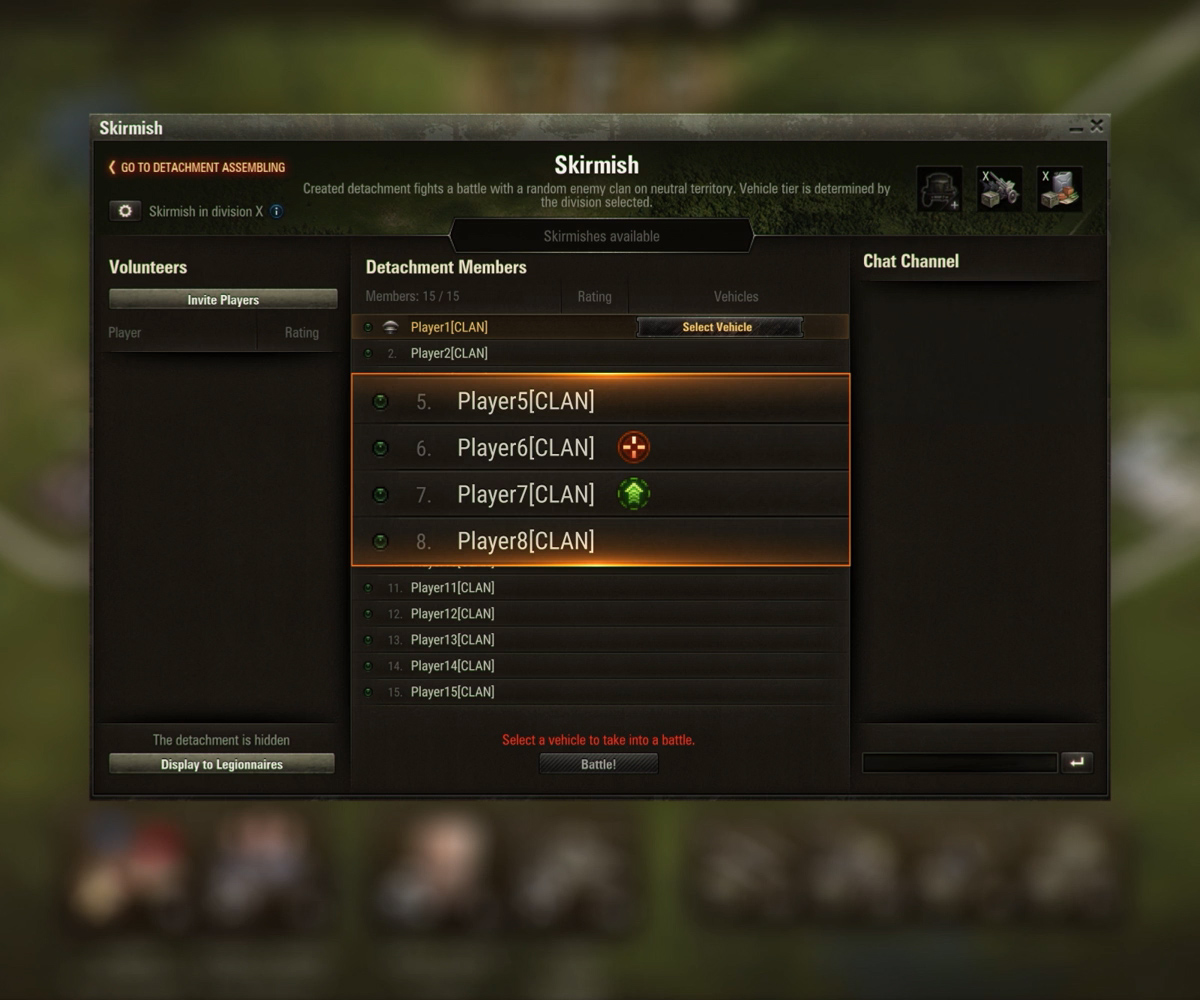 In addition, Artillery Strike now causes fixed—and more predictable—damage. Clan players from both teams will see the strike zone, so you can leave it in time and avoid maximum damage. The higher the Artillery Strike Level, the greater its radius and damage will be.

The economy of Strongholds will also be brought in line with these changes. Once they go live, old buildings will be converted into new ones. They will retain their current level.

With two reworked Combat Reserves, the total bonus to Industrial Resources you earn will remain the same.

Clan commanders and officers will receive special notifications in the game client to learn more about these changes. We're sure that they will provide you with more tactical opportunities and help you win glorious new victories!

Join the Common Test and share your impressions on the updated Steel Hunter mode and Strongholds changes, Commanders!

Eligibility: The cut-off was made on April 26, so all players registered prior to 04:59 UTC+8 on April 26 can participate in the test.

Feedback: Please post your bug reports and general feedback on the Feedback section in Discord.

Added three new vehicles, each of which has unique combat Abilities:

By default, all players have access to the Varyag, Raven, and Arlequin vehicles. The rest of the vehicles can be taken for a free test-drive and then rented for Steel Seals, the unique mode currency.

The size of the map changes dynamically. The shrink speed of the battlefield depends on the number of destroyed vehicles.

The loot composition has been changed

The Platoon is now limited to two players.

Radio Detection upgrades have been reworked. Each of them has distinct pros and cons.

To make the existing vehicles more relevant, balance changes have been made to their technical characteristics

Achievements in the mode can be viewed in the Service Record tab.

A set of unique and daily missions is available. By completing them, you can get more resources, from credits to Steel Seals.