I'm an APAC Community Evangelist, BananaWeewa. As some players know, I have been in this game for nearly 10 years (yes, since the game started in Asia) and I have been involved in many Clan Wars.

But this will be the first time that I will share my experience of joining a very humble clan that helps new players or players who never experienced Clan Wars before. This includes getting the real experience of playing in a team and learning basic skills required in Clan Wars.

This campaign would be a perfect test... I mean perfect scenario to see how inexperienced players react to one of the most intense modes in the game and how they learn throughout 14 days.

Preparation for a Big Event

Although NGV is a community clan that joins every Clan Wars event, the preparation is not as intense as other clan-wars-focused clans. They prefer to have more players in order to have as many battles throughout the campaign.

Most of them are gunning for Tier VIII Premium vehicles or the Improved Compressor – these items can be obtained through high-level competition.

They had a meeting on a Sunday before the campaign started to talk about timezones and player availability. After the meeting, the newbies were invited to join Stronghold battles to let them experience some gameplay relevant to Clan Wars. They learn about positioning, listening to commands, and understanding each individual role on different maps.

The day is concluded after that.

I started at around 20:00 server time. My first opponent was a bit tough because they had some hot meta vehicles like the

T95/FV4201 Chieftain  and Kranvagn on Prokhorovka. It was a tough start because our vehicle lineup was far from perfect – all of our players were completely new to the system and our vehicles were quite off from the current meta.

Our lineup was rather slow with the

Grille 15  and our damage dealer on an open map.

During the game, we managed to gain an advantage by sticking to the middle ground with heavy tanks and forcing enemies out from the hill line with our medium tanks –

Object 907 s. After they took the bait, we used the firepower of our tank destroyers to slowly bleed them out. And we managed to win our first game of the day on that map!

T95/FV4201 Chieftain . We decided to camp out in the forest around A1-A2 to wait for the enemy to come into our line of fire. But we got spotted by their

Panhard EBR 105 . And got disintegrated in a very short time. 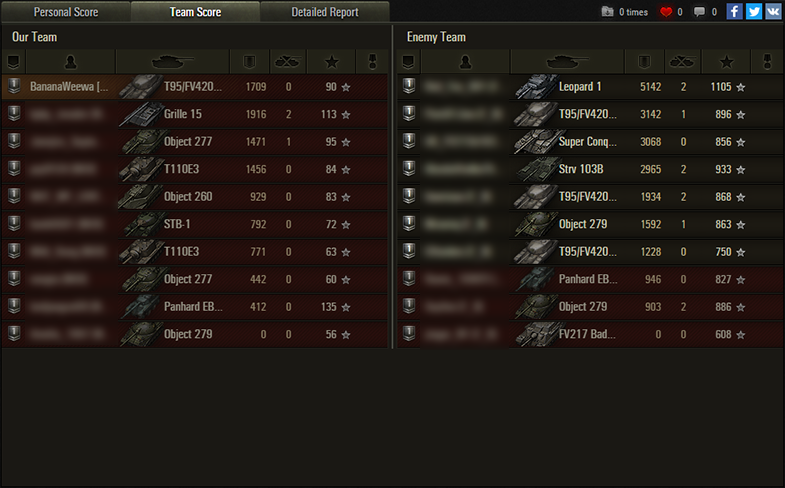 We played on Serene Coast for our second map of the day. This map is dominated by the

Object 279 early  again. We expected an enemy to use some of these vehicles on the hill, but luckily, they didn't bring those in.

Instead, they used their vehicles to rush through the middle town, trying to surround our vehicles defending the base. But with fast action and a decisive call from our clanmate, we managed to shift our position ASAP to deal with surrounding enemy vehicles and prevented them from rushing into  our base. Our successful counterpush earned us a win!

That game was quite straightforward where a counterpush helped to minimize our losses. We were also learning how to share HP correctly to prevent loss of firepower.

This fight was up against a clan with 21

T95/FV4201 Chieftain s in our entire stock. As expected, we changed our strategy to be a rouge type where we bait most of their vehicles to fight our

T95/FV4201 Chieftain  and send a fast medium tank to take their base.

We thought we had this game if we could clear their base fast enough. But due to a lack of syncing during engagement, our flank team did not come in at the right time, and some of our teammates prioritised base capture instead of clearing out enemies. So, we lost that round. 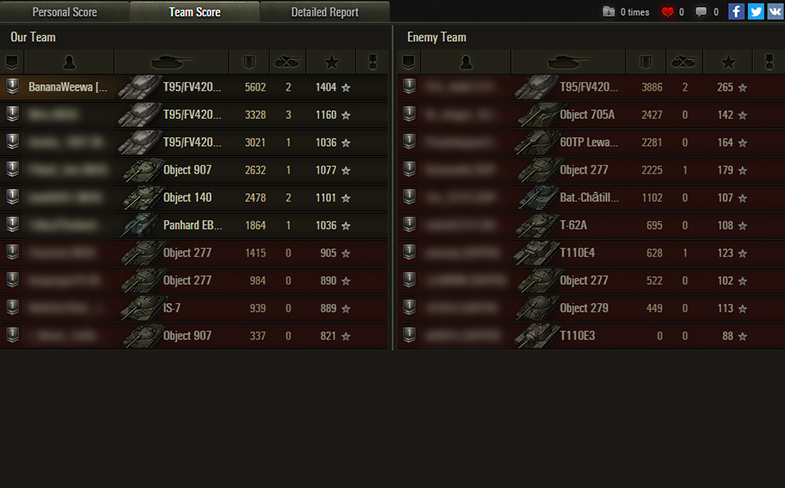 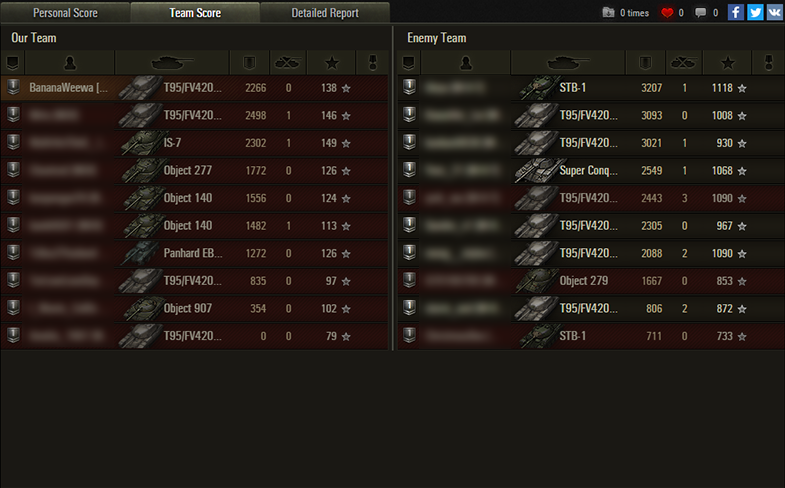 For my third map, Westfield, we faced some experienced clan with a pretty good lineup –

CS-63 s and a fast heavy tank. Our initial plan was to abandon the south hill line and try to conquer the heavy line side. After we checked, it turned out that they sent all their heavy tanks to the middle ridge line to get an assist from

CS-63 s who were waiting and sniping from across the hill.

We did not expect a win, but sometimes, miracles happen, like what went down in this game. Our heavy tanks managed to destroy enemy heavy tanks quickly and we also spotted all the enemy vehicles.

After the main fight, both sides took a lot of damage with a 3v3 as the result. Both sides are now forced to think harder – especially my side with heavy tanks that have less concealment than medium tanks. The enemy had 3

CS-63 s left with some HP advantage. Lucky for us, we had an

STB-1 , though on the verge of death, act as a passive spotter for heavy tanks on the top hill side around the A4 area where tank destroyers usually sit.

We managed to spot and reduce some of their HP in the process and our patience was paying off. One of their

CS-63 s decided to do some spotting in a very wrong position. And that allowed us to punish him with swift destruction.

Now at 3v2, we decided to send one of our

T95/FV4201 Chieftain s to cross the middle ridge to find enemy. As expected, they were sitting in the bush, waiting for us to make a play. After discovering their position, we decided to pursue them and corner them out for a win.

It was a very intense battle, but provided good experience for our newbies!

For Westfield round 2, we faced off with one of the strongest clans in the server. And we knew it was not going to end well. We decided to use an all-medium tank setup and rush to the  south hill and gain control of them by ambushing their medium tanks.

That did not go as planned. Instead, they deployed a

T95/FV4201 Chieftain  from the heavy tank hill, breezed to our base, and captured it.

We only managed to destroy 3 vehicles in the process to gain materials for the workshop. 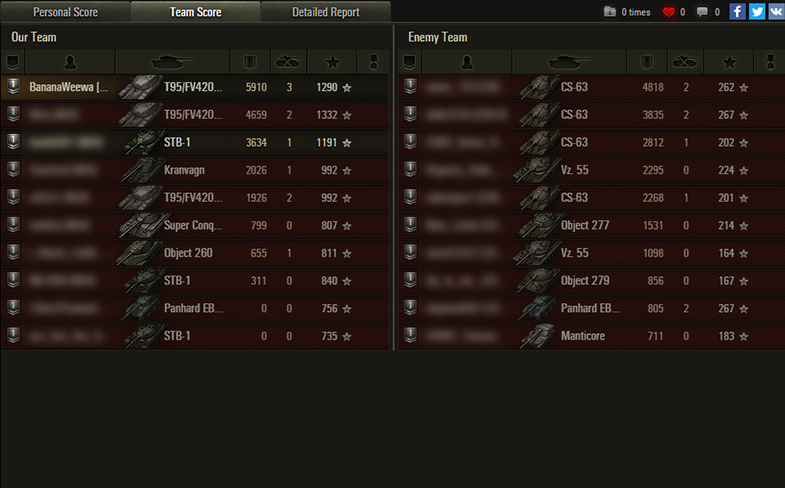 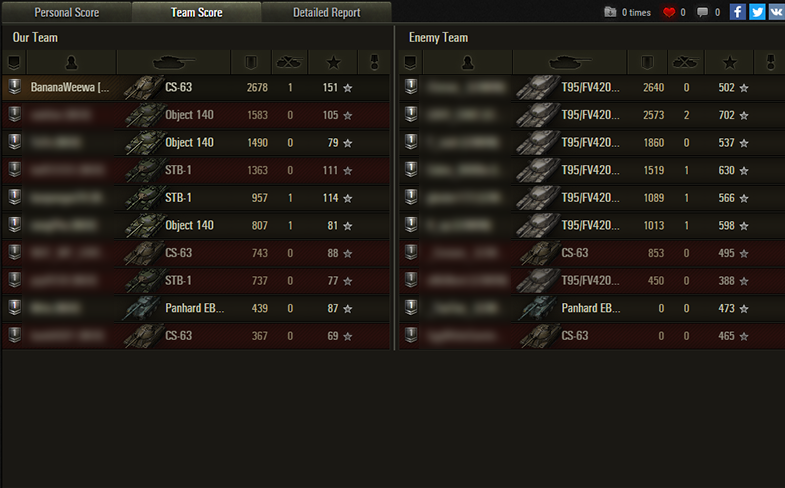 It was quite fun to see newbies performing well in these intense circumstances. Also, with our strange lineup where some of our clanmates did not own any meta tanks, we had to adapt our strategy every time we played on each map with our new players.

Let's see how far we can go with these strange combinations while giving them a live lesson during a Clan Wars battle.

Oh, we even faced a lot of tough clans. And we nearly managed to take our first province on the map on the  first day of the campaign. It was an achievement for NGV to see very good results from the start!

As we know, especially in Clan Wars, having many guns during team fights is always a must. Even if player has a single HP left – yes THAT 1 HP – the player can still deal damage normally as long as the player is still on the field. That's why of all reasons, when you see your team getting unfocused in Clan Wars, look out for what's happening around you. Especially when you are spearheading the group.

Always be aware of your teammates' HP. Taking a shot for your friend at an important moment could change the outcome of battles.