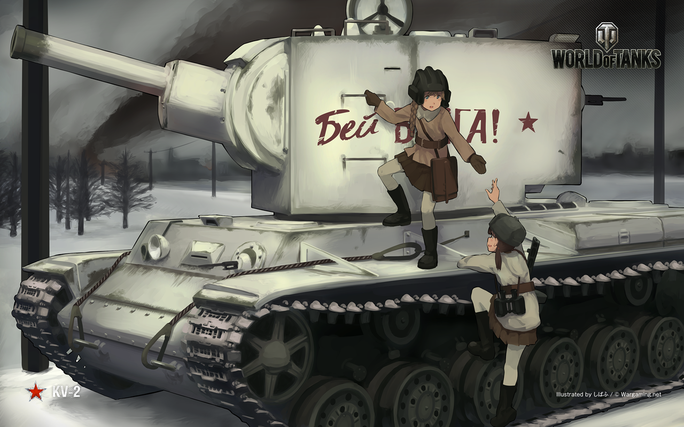 The eighth installment features the peculiar looking tank with the gigantic turret and large-caliber 152 mm howitzer, the KV-2! The tank is known for episodes such as the standoff at Raseiniai on the description of the Epic Achievement, Raseiniai Heroes Medal.

The Soviet KV-1 heavy tanks were the only real heavy tanks in service before the German Tiger I tanks started arriving at the frontlines in the middle of 1942. Germany thought that the invasion of the Soviet Union would be a picnic, but they were faced with these heavy tanks, which could withstand everything the Germans tanks can throw at while being able to penetrate most German armor at the time. The Germans were astounded by the powerful armor and firepower, and called these tanks the “Russischer Koloß (Russian Colossus).”

The KV-series tanks came about as a result of field experiments during the Winter War against the Finnish. During the war, Prototype KV-1 tanks were sent to the front and came back with promising results. Upon seeing this, Soviet high command decided to create a fire support variant, a “large-turret KV” with a heavy howitzer mounted on it.

In order to bring the greatest possible firepower to the front, the KV-2 was originally intended to carry the 203 mm gun. However, it was discovered that this was too heavy, and the 152 mm howitzer M-10 was chosen instead. The gun was capable of firing high-explosive, armour-piercing, and fragmentation shells that weighed over 50 kg each, as well as anti-concrete shells that weighed around 40 kg. The armour-piercing shell could penetrate 72 mm of armour at a distance of 1,500 m. The fact that the Soviets managed to mount this huge gun on a fully-traversing turret is itself a remarkable feat.

As if that was not enough, the KV-1 was already plagued with transmission problems. The KV-2 added 5 more tons onto the same system, hampering the mobility of the vehicle. The tank worked well against immobile enemy fortifications, but against more agile German tanks, KV-2’s transmission and suspension often failed before putting up a decent fight.

The KV-2 was discontinued soon after the German invasion, and only 334 vehicles were built. Instances such as the legendary standoff at Raseiniai made this tank famous, but practically speaking, the KV-2 was a failure.

The powerful 152 mm gun, however, was a favourite amongst soldiers on the front. In this manner, the KV-2 paved way for more successful vehicles such as the SU-152 and the ISU-152.