Day Before the Tournament
3rd April, 2014 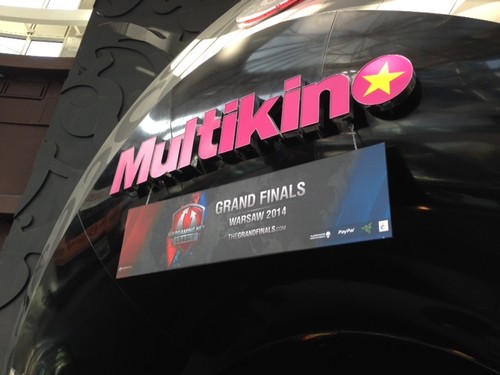 It’s the eve before the Wargaming League Grand Finals and after a long journey across a few continents, we finally arrived at Warsaw Poland, the venue where the grand event is scheduled to be held over the next 3 days. We braved the cold (4 degrees!) and made our way down to Multikino, a cinema in uptown Zlote Tarasy shopping mall which we had taken over for a week to host the tournament.

Snooping around the venue, we took extra care not to get in the way of the setup to bring you super exclusive pictures of the works in progress before the big day. Behold! The fruits of our paparazzi labour! 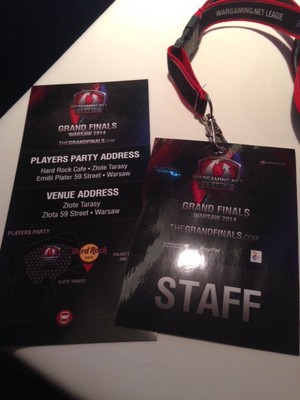 Firstly, you need a license to snoop (doesn’t hurt to grab the after party invites too)


All that walking and exploration have worked up our appetites quite a bit so we head to the restaurant next door in search of grub. 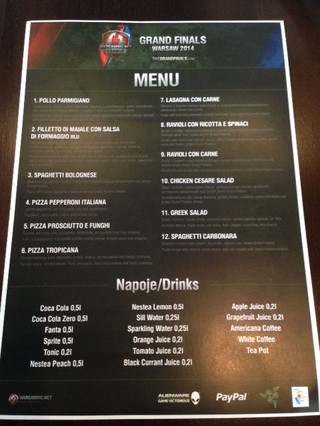 And what better way to fill our tummies than this?

While dining, we ran into the Asia teams PVP Super Friends and U Are Dead. Both teams were in very good spirits and gamely posed for photos for us. Say cheese lasagne! 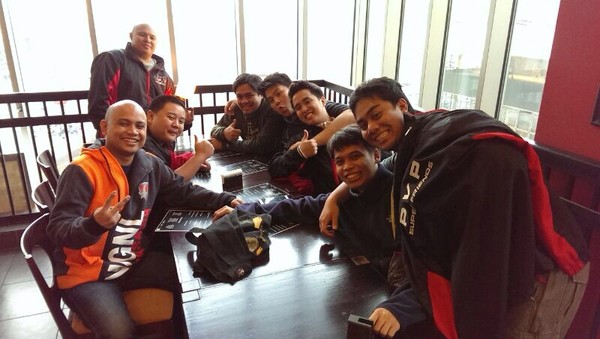 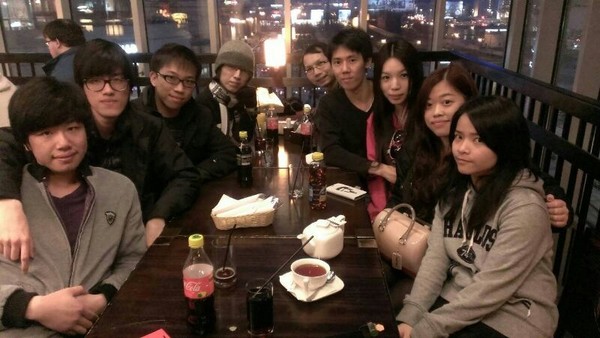 U Are Dead and friends

After dinner, it’s time to play a little game of “Spot WGL”. Take a look at what we’ve managed to uncover!

And the one to rule them all. 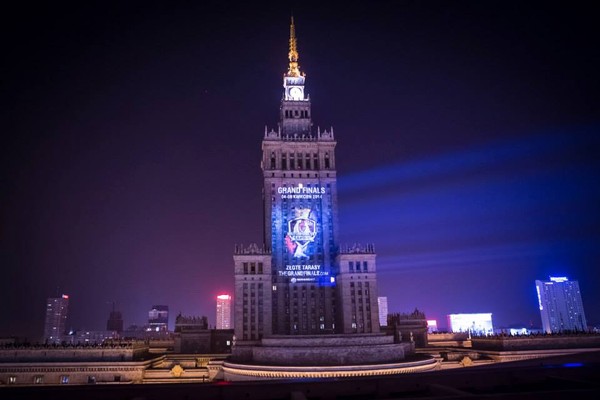 All together now. OoOoooooo...

Now that you have an inkling of what goes on behind closed doors, it's time to move on to the actual day itself to witness the wondrous results of all the hard work put into setting up such a massive event. Onwards to Day 1 of the Wargaming League Grand Finals! 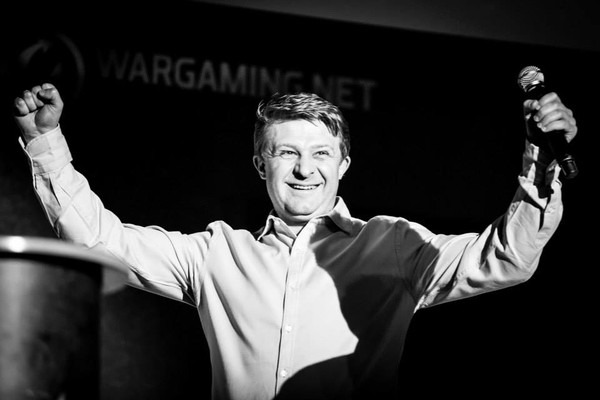 Wargaming.net CEO, Mr Victor Kislyi opened the tournament with a speech to spur on the players and to congratulate them on reaching a great milestone in the tournament. When asked about his choice of winner for the league, he replied that it would not be fair to single out a team as all of those who have made it to the Grand Finals are excellent players in their own right. He paid tribute to the Asian teams by thanking them for taking the trouble to travel all the way to Poland to participate in the tournament. 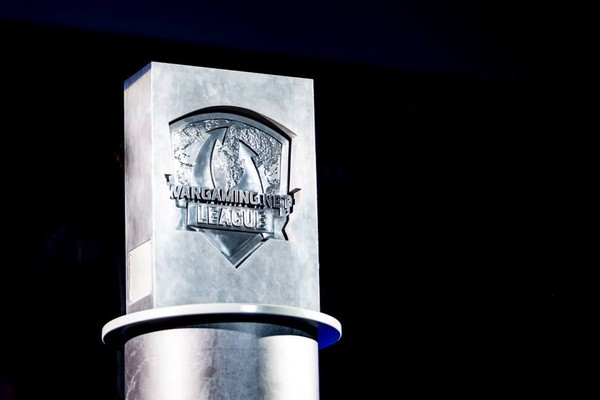 The Wargaming.net League Monolith in all its 30kg glory

After the CEO's speech, the casters got down to work by giving the audiences more indepth information regarding the participating teams and tournament structure. In total, the Wargaming League had 6 crews of casters catering for English (NA & EU), Traditional Chinese, Korean, Russian and Polish. Despite their different nationalities and cultures, all the casters stood united with a common goal: to deliver a riveting account of the battles played so that even the viewers who were spectating from the comforts of home could also be able to feel the intense atmosphere of the league, as though they were physically present at the event itself.

Each time an outstanding play was made, the casters would launch into a flurry of comments that would bring everyone to their feet. Everyone would be on tip toes trying to catch a glimpse of all the action above the sea of heads. 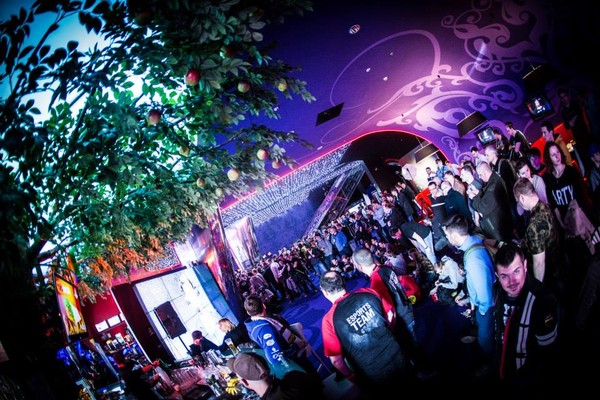 Team UAD, one of the representative teams for Asia was placed against Red Rush: Unity, a strong contender in the tournament for their first matchup. UAD gave it their all, but were no match for the far more experienced Unity who proved to be a formidable opponent. 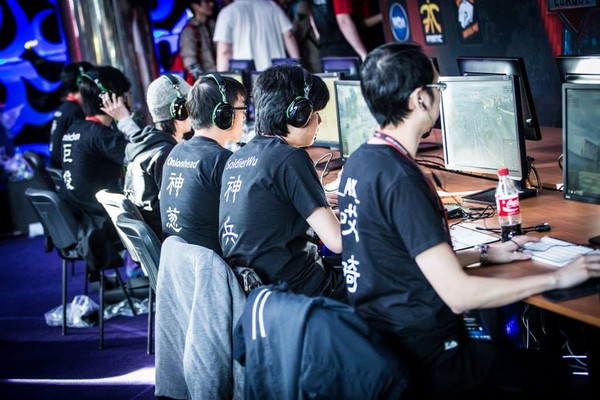 In their second matchup, UAD managed to bounce back from their earlier defeat by beating Energy Pacemaker with a score of 2:0. While it had appeared that things were finally looking up for the HK team, alas, all their hopes were dashed when they failed to make the cut for a second shot at the tournament with their loss to Korean team NOA. With that, UAD was eliminated from the tournament and sent packing.

As the only representative left for Asia, all hopes will be placed on PVP Super Friends to bring honour and glory to the cluster. Will PVP make history by becoming the champion of the first ever Wargaming League? Or will their stars burn out early just like UAD's?

Day 2 of the Wargaming League will reveal it all. Let's watch them and see.

View results and photos of Day 1. 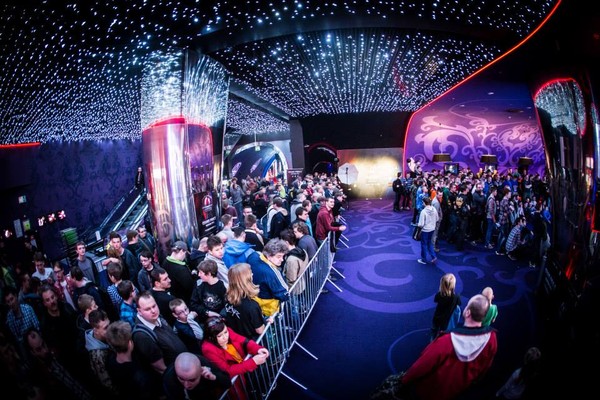 We're really excited and looking forward to today's matches especially PVP's matchup against Navi. Touted as one of the strongest teams in Russia, Navi is a real force to be reckoned with and their matches are often a crowd puller. So it's no surprise that a crowd had gathered at the foyer area where the match will be taking place, eagerly waiting for the battles to commence. After the honorary mention by Victor during his opening speech, PVP had piqued the interests of many and several of whom we spoke to expressed their desire to watch the team live in action and see how they would fare against a strong contender such as Navi.


By the time it was PVP's turn to settle down for their first battle, the Chinese and Korean teams had by then already been booted to the loser's brackets after suffering defeats at the hands of the American and Polish teams respectively. On top of having to go up against Navi in their maiden battle of the tournament, PVP faces immense pressure to win as all hope from their Asian counterparts now rests on them.

PVP however, being the energetic and happy-go-lucky bunch that they are, kept calm and cool headed even in the face of mounting pressure and a daunting opponent such as Navi. Their humour in particular, often shone through during our short exchanges with them.

When quizzed about their reluctance to play on stage, they gazed at the ground with heads bowed and replied in a solemn voice.

before bursting into fits of uncontrollable laughter. 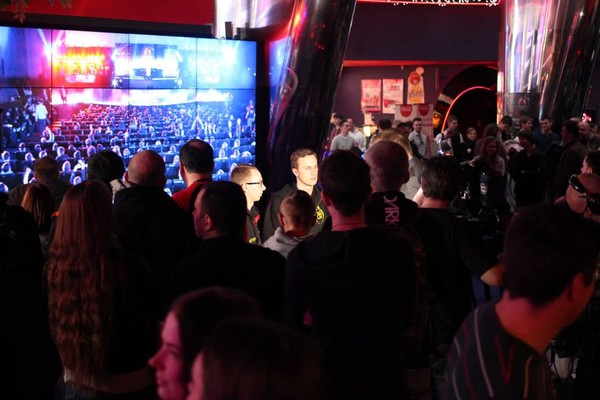 When their first game against Navi ended in a draw, the silence was suddenly shattered by an exclamation of "YES! DRAW!" from the competitor area where PVP was seated.

Another shout of "We draw with the number one team in Russia! [sic]" incited laughter from the audiences and eased the otherwise tense atmosphere hanging in the air. Fans of Polish team Lemming Train who were standing around nearby turned their attention away from the live stream to look at PVP while other curious onlookers peeked into the competitor area to see what the commotion was about.

We draw with the number one team in Russia!

Sadly, PVP didn't manage to beat Navi and was thus booted to the loser's bracket. However, they could still earn a second chance at making it to the semi-finals the next day due to the double elimination format of the group stages. This meant that they would have to claw their way back out of the loser's bracket by defeating all the other teams in it.

Their first obstacle was ARETE from Korea.

After a close game (both teams were tied at 2:2), PVP managed to defeat the Korean team to move on a step forward to breaking out of the loser's bracket. Although disappointed that ARETE was no longer in the tournament, some supporters of the Korean team extended their heartfelt congratulations to PVP and said that they would be rooting for the Asia team to win.

The second obstacle came in the form of Fnatic, the American team formerly known as Fulcrum Gaming. Their eSports resume packs plenty of competitive experience, having competed in big name tournaments such as World Cyber Games and Ural Steel, so the team is one that will be hard to beat.

Biggest Upset of the Tournament

With this victory over Fnatic, PVP is now in the top 4 placings and will advance to Day 3 to compete for the championship title!

The epic showdown between PVP and Fnatic can be watched here.

View results and photos of Day 2. 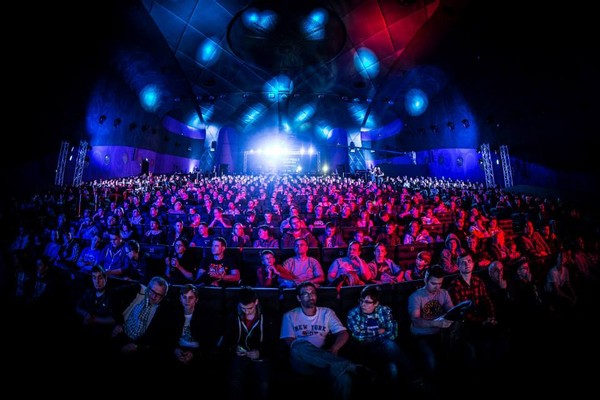 Emotions are running high for team PVP as they enter into Day 3 of the competition. After their defeat to Navi, they had crawled their way out of the loser's bracket pit by defeating ARETE and Fnatic to earn a place in the semi-finals today next to Virtus.Pro, Red Rush: Unity and Navi. Their victory over Fnatic the night before had sent ripples of shock reverberating throughout the entire WoT community, with many labeling it as the biggest upset of the tournament. Online, the Asia social media pages exploded into a frenzy of posts, most of which either expressed congratulatory sentiments or utter disbelief.

Today is looking to be even more exciting than the day before and we're all set and eager to see what these four teams will be bringing to the table. 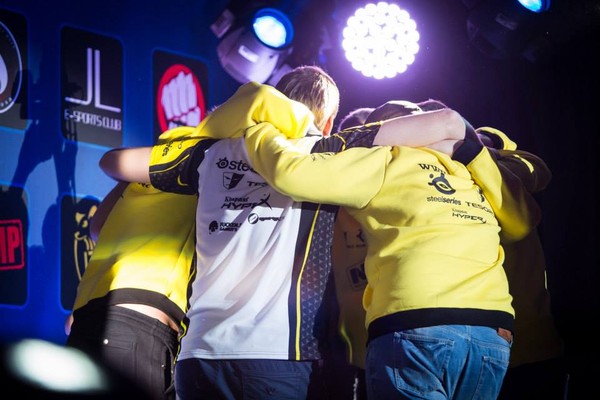 The 4 teams gathered at the main stage venue to prepare for the upcoming matches ahead. Team Navi and Virtus.Pro are up first so they took to their seats in the stage booths to set up for their match. The teams also rehearsed for the prize ceremony, taking turns to lift the heavy monolith and exercising care not to drop it on anyone's feet. (Each team had to pick the strongest member to carry the monolith). When all preparations were done, we embarked on the first match of Day 3 - Navi vs Virtus.PRO. 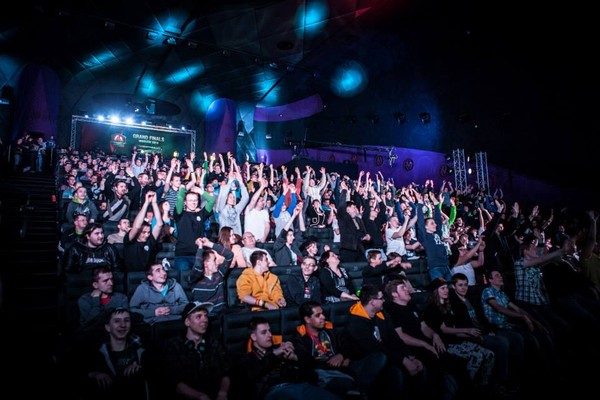 The Champion is Crowned

With a final score of 5:4, Navi is declared the champion of the Wargaming League, bringing the 3 day long tournament to a close. We can only imagine how relieved the teams must feel, now that all the pressures and stresses of the competition has been lifted off their shoulders. It has truly been a magical journey for everyone here at the Wargaming League and although we're sad that the event is already over, we'll be looking forward to the next one. Viva WGL! 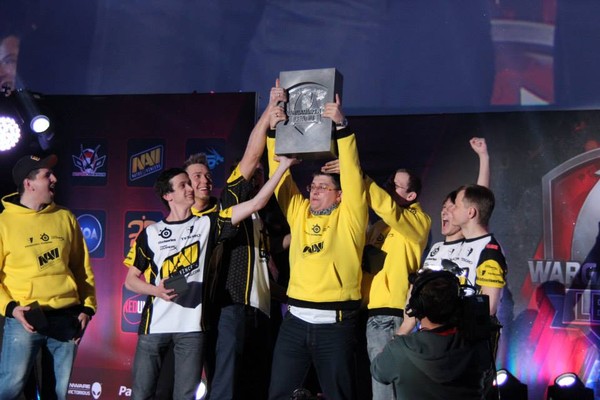 PVP's journey in the WGL may have ended here but what they have achieved is something that will be talked about for years and not something  any other team can easily emulate. They may have lost the tournament but they won over the hearts of people everywhere around the world. While playing to win may be the main focus of the tournament, they have reminded us of something else that is far more important than winning... and that is having fun while you're at it.

Asia is truly proud and honoured to be represented by PVP Super Friends. We wish them all the best in future tournaments! 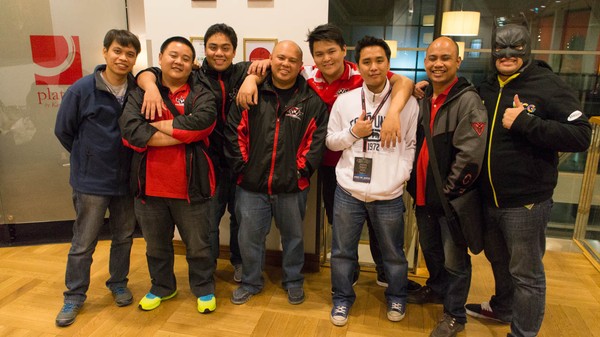 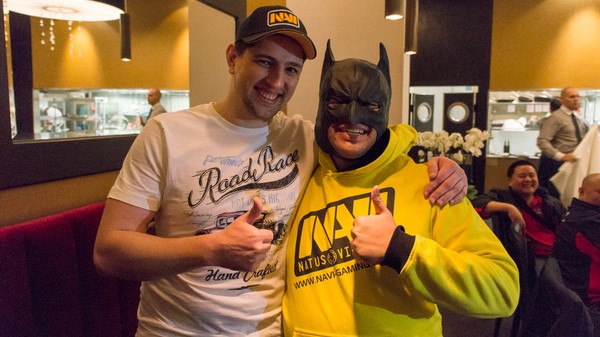 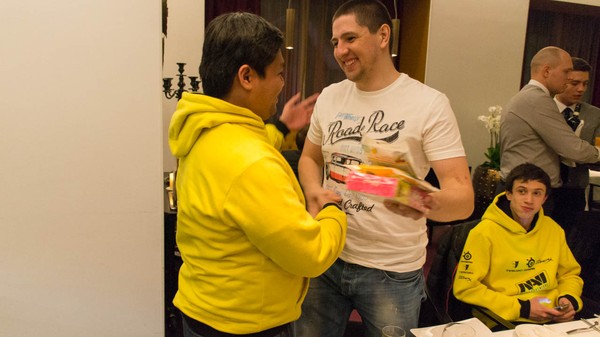 No, actually it's just a gift exchange. 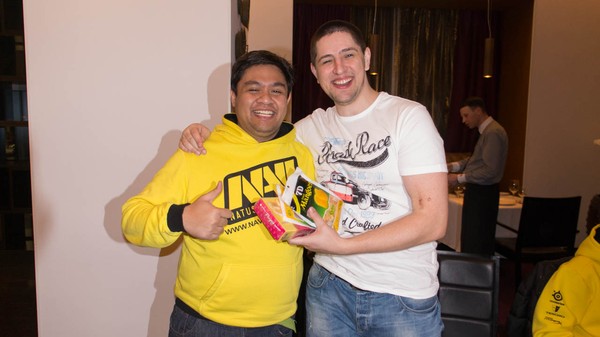 Everyone's happy with their loot. 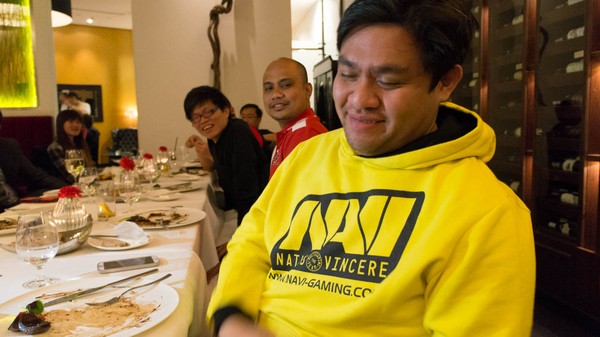 Too happy for words.