You may have noticed that we have quite a few online tournaments going on right now. There's WGL Asia Bronze Series - the gateway to the biggest World of Tanks tournament in the region, the weekly Siege of 8s and the War of 5s. With so many to choose from, anyone can create a team with their buddies and pit their skills against other rival teams easily. Imagine winning a tournament while relaxing in the comfort of your home, or at an internet cafe nearby!

If that's not enough incentive for you to dive into the world of eSports, we have another surprise waiting: From this week onwards, we're starting a lottery campaign for all competitors in online tournaments. Although it's restricted to tournament participants only, winning this lottery relies on pure luck; skill will not be enough to win this time.

If you're eager to take a look at this week's numbers, just click here to jump right to the section. However, we strongly recommend taking a look at the rules, so read on to understand how it all works!

Each week, we will pick a three-digit number at random. This number will be announced every Wednesday at 15:00 PM (UTC +8) on an image, like the one shown below: 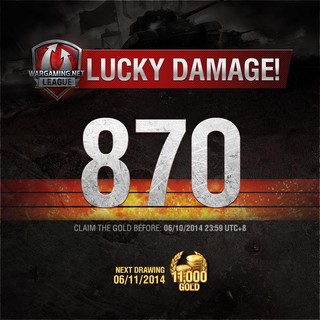 There are two ways to win the lottery; they are called the 'Straight Play' and 'Box Play' methods:

For this week, we'll be using the numbers used for the example above as the Lucky Damage Number. Just in case you've forgotten them already, here it is!