Behind the Medal – Lafayette G. Pool

Pool’s Medal is one of the most prestigious medals available in-game and among one of the rarest. It is awarded for destroying 10-13 enemy vehicles in one battle. The medal is synonymous with carrying, and coming out on top of 1v3+ situations leading to some incredible in-game moments of determination and victory over all odds. Let’s take a look at why this medal is in the game and why Lafayette G. Pool is its namesake. It’s time to look at the man Behind the Medal. 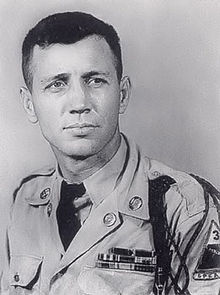 Lafayette Green Pool was born on the 23rd of July 1919 in Odem, Texas. A sworn fighter, Pool boxed his way through the Golden Circuit throughout his teenage and early adult years. After graduating high school in 1938 he enrolled in the Texas College of Arts and Industries to study engineering after being rejected from the Navy for an injury sustained to his eye from his incredibly successful amateur boxing career.

After a brief year at college he was drafted in to the United States Army in 1941 and assigned to the brand new 3rd Armored Divison. During his training he also won the chance to fight in the Army’s National Championships. 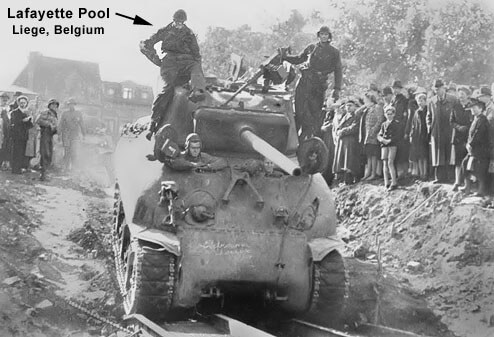 His fighting would switch tact when the brand new M4 Shermans rolled straight off the factory line. He was promoted to Staff Sergeant and chosen to attend the Officer Candidate School, and offer he then refused preferring to prepare for combat with his crew, a crew he hand picked and remained with for the entirety of the war.

His crew, known as “The Pups” referred to him as “War Daddy” and consisted of 17 year old bow gunner Bert “Schoolboy” Close, loader Del “Jailbird” Boggs, main gunner Willis “Groundhog” Oller and lastly driver Wilbert “Baby” Richards. During the September of 1943, they were all shipped off to England to continue their training. 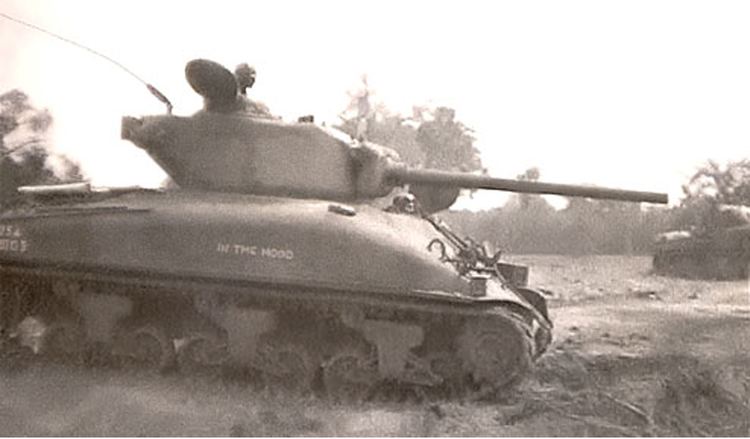 After nearly an additional year of training, Pool was named leader of the Spearhead Division, and entered combat on the 27th of June 1944. Pool’s first M4A1 Sherman “IN THE MOOD” fought for 6 days over a siege at Normandy until it was knocked out by an enemy panzerfaust on the 29th of June 1944. Pool’s second Sherman was knocked out after a month and a half clearing German forces from Fomental Village when it was taken out by a P-38 bomber in an accidental friendly fire incident during the 17th of August 1944.

Pool’s third and final Sherman was knocked out after being ambushed by a German Panther, getting hit twice and flipping and blowing Pool out of his commander hatch, injuring his leg greatly, which Pool attempted to amputate on the field with nothing but a pocket knife. His leg was then amputated by a surgeon once they were retrieved. 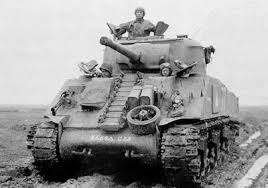 Despite only being in active combat for 81 days, Pool and his crew are credited with 12 confirmed tank kills, 258 armored vehicle and self-propelled gun kills, over 1000 German solider kills and a further 250 taken prisoner. For this he is widely recognised as the US tank ace of aces, and was awarded numerous medals, including the Distinguished Service Cross, the Legion of Merit, the Silver Star, the Purple Heart, the Belgian Fourrangere and the French Legion of Honour.

After his injury and at the conclusion of the war he went through 22 months of rehabilitation and was fitted with a prosthetic leg and re-enlisted in the Army in 1948 where he became an instructor, giving the wealth of his experience to the next generation of Tankers.

* Awarded to players in vehicles Tier V and above for destroying 10–13 enemy vehicles in one Standard, Assault, or Encounter battle. Destroy 13-20 enemy vehicles in Grand Battles. Random Battles only. Unavailable in Clan Wars.

Note: The BTMPOOL code must be redeemed to unlock the mission. Achieve the medal and win "Superman" inscriptions along with 30,000 Battle EXP!