On July 28, a second Wargaming Military Bus Tour was held in Japan.

In anticipation of World of Warships and also since the warship scene in Japan is currently a hot topic in the military genre, this military tour focused on the naval aspects. It was held in Kure and Etajima Hiroshima, which has traditionally been a home to a host of warships and still remains a major naval base for the Japan Maritime Self-Defense Force today.

The tour journeyed through the JMSDF First Service School in Etajima, a naval academy since the age of the ironclads, which hosts unique exhibits such as the “Type A Kō-hyōteki” Midget Submarine, the main turret of the battleship Mutsu and the anchor of the destroyer Yukikaze, as well as the Yamato Museum. We’ll give you a glance of the tour filled with warships!

The tour assembled quite early in the morning, at 8 am, but there were people already gathered when the reception started at 7:30. This tour was held in Hiroshima, and there were a lot of local participants, but many users from various other parts of Japan attended as well.

Everyone was given a souvenir polo shirt and loaded onto the bus. The first destination is the JMSDF First Service School in Etajima. As a naval themed tour, it is only fitting that the tour starts on the sea, so we took a ferry from the Hiroshima Port.

At the JMSDF First Service School, a tour guide, an ex-submariner of the JMSDF joined us and walked us through the historical sites, such as the Student Hall, which exists since the site was the Imperial Japanese Naval Academy, and the Naval History Museum, which hold precious valuable documents on the history of the Japanese naval forces, since its founding in the last days of the Tokugawa shogunate rule.

There are many displays from the old Japanese Navy, including the Type A Kō-hyōteki midget submarine, which was actually used in the Pearl Harbor Attack, as well as a display of a similar midget sub Kairyu with the sides cut to show the internals. There were also shells from various ships such as the battleships Yamato and Nagato, as well as the anchor of the destroyer Yukikaze, which was returned from Taiwan after her service there. Tour participants eagerly listened to the guide and took photos.

A highlight of the tour of the First Service School is the main gun turret of the battleship Mutsu. This turret is off limits to regular tours, but we obtained special permission to get near to the massive gun.

After taking a group photo, the tour headed to the next destination, Nomi Kaijo Lodge, to have lunch. After receiving a brief explanation from the Phalanx about where the light cruiser Ōyodo was capsized in shallow water, the tour reached Nomi Kaijo Lodge. At Nomi Kaijyo Lodge, friendly talks about the game and tour filled the room while everyone had lunch.

To Yamato Museum in Kure

Once break was over, everyone got on board again and headed for Yamato Museum. Military advisor Tadamasa “Phalanx” Miyanaga talked about the history of Kure and warships in Japan as the bus passed by the JMSDF anchorage and the dock that built the battleship Yamato. There was a brief stop on top of the hill above the dock to take photos of the Yamato dock. And before everyone knew it, the bus arrived at the Yamato Museum.

At the Yamato Museum, there was another optional tour by volunteer tour guides. In the museum, there were the huge 1/10 scale battleship Yamato, precious documents, a Yarrow boiler used on the Kongo, and large exhibits such as the Mitsubishi A6M, Kairyu and the Kaiten.

At the end of the tour, everyone got together at the Yamato Wharf, designed in the image of the full-scale battleship Yamato, and then headed back to Hiroshima Station. 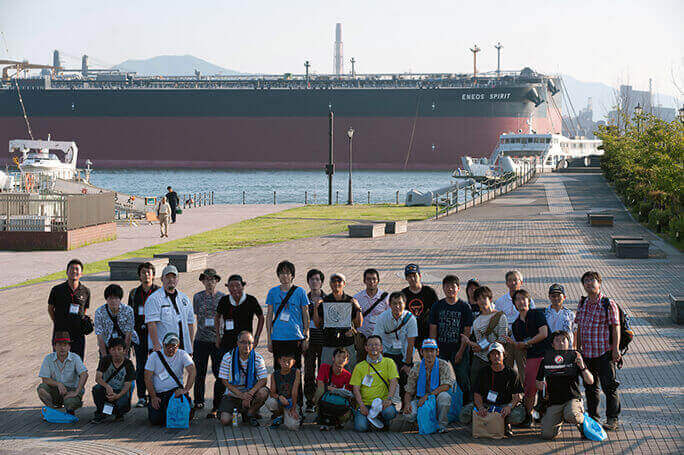 It was a very hot summer day, but everyone had fun seeing warships and immersing in naval history of the area.

Keep your eyes peeled for Wargaming events in your area!