On Sunday, Tokyo Game Show was opened to all fans of video games and anime in Asia. We have prepared for the fans to make this last day the best and most memorable one!

Please check the link below for the stage programmes and event merchandises!

The last day of Tokyo Game Show was totally different from the day before. In contrast to the gloomy weather on Saturday, there were clear blue skies and perfect weather! Many Warships fans rushed to grab the trial play admission tickets so they were one of the first tickets to disappear!

M.S.S.P members, KSK (pioneer of livestreaming in Japan) and Bridcutt Sarah Emi (voice actress) made an appearance on stage. They answered several questions from audiences ranging from “shocking news” to “favourite mobile suit”.

After that, a special battle (Girls und Panzer style flag match, where you try to take out the opponent's leader tank) was held with some of the audiences. They played a friendly match and everyone appeared to be enjoying themselves tremendously.

According to voting results by NICONICO livestreaming, "bust" won an overwhelming victory in vote numbers. Saki also had more experience than Yuka in World of Tanks.

Although many people expected Saki's team to win, team Yuka rose up on top with their great team work. (The force is strong in the hip!)

There was a special talk show held with Mr Sugiyama (Producer of Girls und Panzer), Mr Minami (Producer of Arpegio of Blue Steel –ARS NOVA-) and Ms Fuchigami (lead voice actress for both anime). They talked about the movie, which both the respective series are working on, as well as ideas for a 3-way collaboration among the two series and Wargaming.

Saki Yoshida lost the previous game to Yuka Kuramochi, so she definitely wanted to win this time badly. However, the hip was even stronger this time, aided by a maid from the Maid United Army who joined in as a helper. Yuka Kuramochi won yet again. 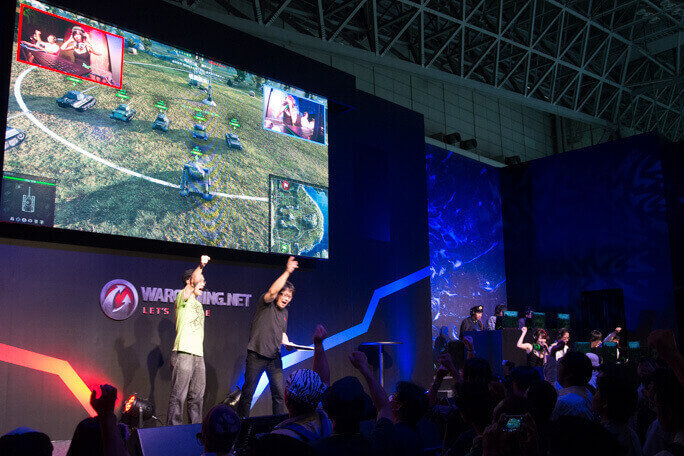 “Trident” (unit from Apregio of Blue Steel –ARS NOVA-) had a live stage performance at the Wargming booth (members were Mai Fuchigami as IONA, Manami Numakura as Takao and HIbiku Yamamura as Haruna). After the performance, Ivan (World of Warships Director of Global Operations) joined in on stage for a discussion segment about the collaboration. Ivan was questioned about his plans for the collaboration going forward and he replied that he might incorporate character voice packs and skin MODs and would be delighted if it could help a wide range of fans enjoy playing World of Warships. 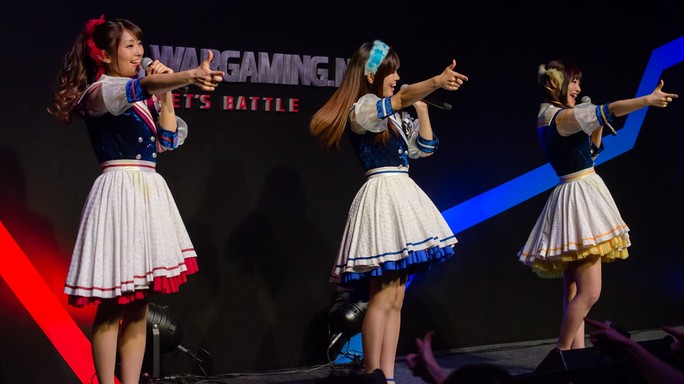 All members of the Wargaming Japan team used Tiger IIs in the first battle. They tried to form a Panzerkeil, but the lack of mobility prevented them from carrying out their plans. A medium tank from the Alliance Team surprised the Japan Team by flanking them before the Panzerkeil was formed, and the Japan Team was destroyed one after the other.The first match was won by the Alliance.

The Wargaming Japan Team decided to change their strategy in the second game by using a more balanced formation this time. Right after battle began, Japan team's light tanks rushed to take control of the hill in the center of the map, and they used their height advantage to keep tabs on the Alliance Team's movements. Alliance Team tried to fight back from two different sides, but they were all destroyed by Wargaming Japan team.

The biggest Game expo "Tokyo Game Show 2014" has ended after four incredibly fun-filled days to much success. Did everyone enjoy the show?

Please stay tuned for more upcoming events from Wargaming. We are looking forward to seeing everyone again!