Public Day of Tokyo Game Show has finally opened! We are reporting on the battle events and special talk show of World of Warships held at the Wargaming booth on the 3rd day!

Please check the link below for the stage programmes event merchandises!

Although the weather was not ideal today, it didn't stop the crowds from paying the event a visit. After all, it was the first day the event was open to the public so it was not to be missed! Some of the visitors rushed straight for the Wargaming booth to get a trial play ticket for World of Warships right after the gates opened.

The United Maid Army had lost against the Media Alliance yesterday, but it seems like they have trained themselves overnight after the previous stage. Their opponents today will be chosen from the audiences. As the audience team did not have a good coordination like the media team, and there was no handicap this time. However, one of the participants have been playing WoT for more than a year, so this battle is looking to be tough for the United Maid Army!

Both teams tried to attack each other but to no avail. In the end, everyone bunched up together in the corner until the time ran out! The battle was declared a tie. After the match, a “Moe Moe rock, paper, scissors game” was held to decide the winner. Team leaders represented their teams for the tie-breaker and after several more ties (more than 5 times!), the United Maid Army prevailed. They have finally succeeded in achieving their first victory.

This is the public day version of the much anticipated “World of Warships” special talk show stage.

The first topic they touched upon after their self-introductions were the types of ships they liked. Tatiana likes the Pagoda-mast on Fuso as it reminded her of the multi-storied pagoda seen in far-eastern architecture, and the Phalanx said that he likes Shimakaze's powerful torpedoes. Ivan on the other hand, favours the iconic battleship Yamato, which is widely known in Japan, even to non-military enthusiasts.

Before the stage segment ended, the Phalanx answered a question posed by a member of the audience, "Where were the most unexpected place the documents about Japanese warships were found?” His answer was "Ordinary people's homes. People whose families had a relation with the old navy sometimes find blueprints and important documents lying around their houses, so if you find something unusual, please let me know!" 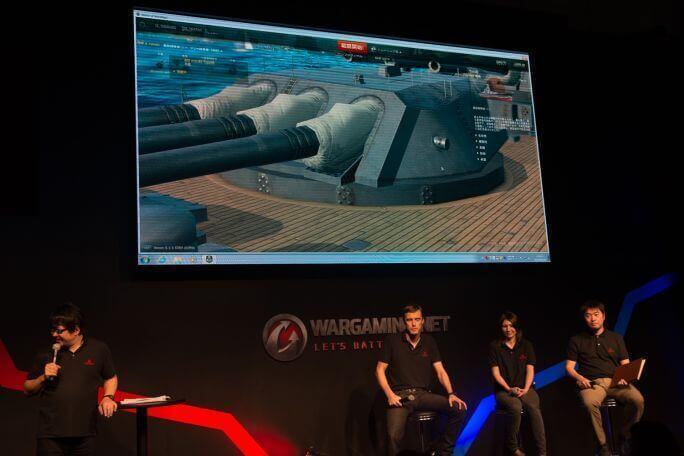 Where were the most unexpected place the documents about Japanese battle ships were found?

Ordinary people's homes. People whose families had a relation with the old navy sometimes find blueprints and important documents lying around their houses, so if you find something unusual, please let me know!

This time, the Wargaming Alliance Team had to fight against the audience team without Victor Kislyi, Wargaming CEO, as he had already returned to his country. Despite this, the WG Alliance team still managed to secure a victory in the first match by destroying all the vehicles of the audience team.

The second battle started out like the first with both teams trying to attack each other from their sides of the map. The WG Alliance team eventually managed to start a capture of the audience team's base. Even though the Audience team acted immediately and hurried back to their base to defend, alas they did not manage to stop the capture. Thus, the WG Alliance team were awarded victory. As a reward, prizes were distributed to all visitors in the Wargaming booth.

Please check for the programmes on Sunday, 21st September.

Event schedule may be subject to change.

Those who can`t make it to Tokyo Game Show 2014, don`t fret! Throughout 4 days of the event, there will be livestream feed showing everything going on at the venue! Also, keep an eye out for the keywords appearing throughout show. The first 15.000 users to find out the code will be presented with a week`s worth of premium time! Be sure to check the show until its end!