A Victim of Circumstance: How Japan purchased a Tiger I

Back in the early days of World War II, Japan was still in its infancy in terms of its military technology; due to it being an island nation, strengthening the navy and air force was their highest priority. The army was not exactly weak in comparison, but the equipment in use at the time was definitely inferior to their European counterparts, who were by then well-versed in ground engagements.

The disparity was clear simply by looking at the Japanese armored vehicles of the day. Even the most advanced mass-produced Japanese vehicles — the Type 97 ShinHoTo Chi-Ha — was weak when compared to the Soviet T-34, German Pz.Kpfw IV, or the US M4 Sherman. Heavy tanks were simply not used by the Japanese Army at all.

An Empire in Danger

The poor quality of Japanese tanks was not the result of erroneous actions on the part of their military leaders. The Pacific islands served as the main theater of war for Japan, which meant that all vehicles and supplementary equipment had to be transported by sea, which in turn necessitated the restriction of their weight. The terrain of the islands they fought on was not suitable for using heavy vehicles either. The armament of China, the only major mainland rival of Japan, was of very poor quality, and the combat capabilities of Japanese vehicles against the Chinese Army proved more than enough. 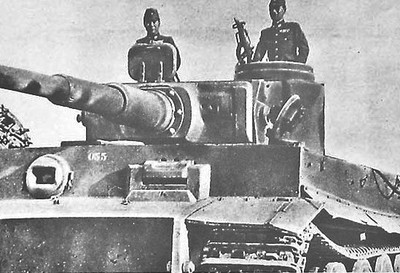 Top: Tiger I heavy tank. Japan, which did not have any heavy tanks of its own, called on their ally Germany to aid them, who had developed one of the most effective tanks of World War II.

On December 7, 1941, Japan attacked the USA, which signalled the start of the Imperial Japanese Army's conquest of the Pacific islands. Japanese invaded the Philippines and multiple islands of Oceania, and also partially made inroads into New Guinea. In turn, the allied forces expended much time and effort to turn the tide of war in their favour.

During their domination of the Pacific region, the IJA created a defensive perimeter, where the islands served as strongholds. However, the USA soon began to turn things around. In June 1942, The Imperial Japanese Navy lost four aircraft carriers during the Battle of Midway. The Battle of Guadalcanal, which lasted six months and ended in February of 1943 with the victory of USA, deprived Japan of strategic initiative and resources. Their defensive perimeter began falling apart under the increased intensity of the attacks, until the Americans - by conquering island by island, approached the Japanese islands.

This caused the Japanese military leaders to ponder the threat of the US invasion. To repel the Allied attacks successfully, the Japanese needed heavy tanks - vehicles that were purely in the conceptual stages and had yet to be embodied in metal. But there is hope yet. Their German allies had just created a powerful new tank, a perfect solution for Japan's needs: the Pz.Kpfw VI Tiger.

At first, Germany responded enthusiastically to the proposal of their Axis allies. Hiroshi Oshima, the Japanese ambassador, was taken to the Kummersdorf facility and shown the production of Tigers at the Henschel plants. The ambassador subsequently became closely acquainted with the product. Thrilled with the idea of fielding Tiger Is in mainland Japan, negotations quickly began with the German Ministry of Armaments.

In 1943, Japan received two packages of technical documentation for the Tiger I, after which the point of purchasing the tanks was been raised. The cost of a Tiger was around 300,000 Reichsmarks in 1943 prices, but the Ministry of Armaments and Henschel requested a sum of 645,000 Reichsmarks. The price was obviously sky-high, but the Germans were not looking to swindle their overseas allies. First, the tank would be supplied with ammunition, radio, and optics. Second, the Germans were willing to disassemble and pack the tank before shipping it to Japan. Aside from that, it also seemed that the cost of technical documentation was also included in the quoted amount.

Top: One of the vessels that could have transported the Tiger I to the shores of Japan.

But what was the point of disassembling a tank? The deal itself did not present any difficulties, but the shipping did. The option of transporting via surface ships was tossed aside quickly; the Allies were in control of the Mediterranean Sea and Atlantic and would easily send any Axis vessel down into the deeps. The only other alternative was by using underwater shipping, but this idea was less than stellar; not many vessels capable of doing so could bear a huge 30-ton hull. The submarine aircraft carriers - the only thing that could have handled the task with ease - were complete yet. Faced with all these problems, the delivery of the Tiger had every chance to hit a snag on its way to Japan. The most optimistic estimate predicted an arrival date of no earlier than December 1944.

Despite the concerns about safely transporting the Tiger, the tank was eventually sent to the Bordeaux port. In February 1944, the Japanese paid for the order and officially came into possession of the Tiger, although the tank was as useful as an extremely large paperweight.

In the summer of 1944, the Allies landed in Normandy and put Germany on the spot. Following the Decision of the Supreme High Command of the German Army dated 21 September 1944, the Japanese Tiger was leased (or requisitioned, according to other sources) and passed on to the field forces. It was eventually lost somewhere in Western Front.