Germany and USSR signed the Molotov–Ribbentrop Pact, technically joining them as allies, and split Poland up in two for themselves in 1939. But on 22nd June 1941, a German force numbering 3 million units secretly assembled on the Germany-USSR frontier and suddenly began an all-out assault on the USSR.

Although the inital German offensive was extremely successful, the Germans soon found themselves in big trouble; Soviet tanks like the KV-1 and T-34 had turned out to be more powerful than they had imagined.

The USSR had always maintained an active steel industry and invested immense effort, resources and time in the production of tank designs, including light, medium and heavy tanks. The Soviet forces first comprised of a series of BT light tanks, as well as T-26 tanks that were also sold to China, which later became the main armoured force of the Nationalist party. The Soviets also manufactured multi-turreted tanks like the T-28, which had one main turret mounting a 76mm gun and two sub turrets, each armed with a 7.62mm machine gun. It also boasted an 80mm armor thickness and radio capabilities.

It was obvious that Soviet tanks were not so good in the beginning, but the T-34 produced in 1940 was a revolutionary progress. This tank possessed a brand-new suspension system that was invented by the American engineer, J. Walter Christie. The system itself was built by using large road wheels exclusively, with no system of return rollers for the upper run of the track. This translated into an excellent shock-absorbing effect along with cross-country capability.

The hull of the T-34 was made with sloped armour in mind, which could bounce off shells from enemy guns. The cast turret with radian measure could also deflect shells adequately. On the inside, the T-34 was equipped with a durable diesel engine, so it had a top speed of 55 km/h, or a sustained 30 km/h when cross-country driving. The long cruise distance and wide tracks of the tank also made it more suitable for operating in the harsh geographical environments common in the USSR (e.g. snow, mud or swamp).

In terms of armaments, the T-34 was equipped with a 76mm gun, known for its decent penetration power. German tanks had difficulties in destroying T-34s more than 500 metres away, but a T-34 could easily destroy a German Panzer III or Panzer IV at a distance of more than 1000m. The fire power, mobility and protection of the T-34 were far better than what the Panzer III and Panzer IV could offer, and it was the best tank in the world at the time.

Each T-34 was manned by a crew of four: The commander/gunner, a radio operator, a driver and a loader. Occasionally, a T-34 would roll into combat with only 3 crew members instead (minus the radio operator). When facing German forces in the field, the Soviets usually utilized human wave tactics and matched the quality of Germans by sheer numbers. Because no one could predict the longevity of the tanks once they were deployed into the battlefield, the Soviets placed more emphasis on mass production than pefecting every single unit. If you ever get the chance to observe a Soviet tank in person, you will notice the rough surfaces present on them. In contrast, Germany had fewer resources and was renowned for its metal processing techniques, so German tanks were more valuable and had a more finished surface.

Although the Soviets had T-34s and KV-1s and KV-2s, all heavy tanks with tough armor, they still possesed poor combat capabilities due to a lack of tactics and command systems. On the other hand, the German anti-tank guns were mainly 37mm or 50mm in calibre, which mean that they could only penetrate the sides or backs of the Soviet heavy tanks with any real chance of success. In the end, the German forces had to resort to 88mm anti-aircraft guns to deal with their foe.

The T-34s in particular were a major nuisance for the German army, who in turn ordered the development of new tanks. They also briefly considered copying the T-34s design directly, but abandoned the idea out of a sense of self-respect, as well as perceived problems with the engine technology. Eventually, the Germans developed a new Panzer V model, which they named as the “Panther”.

＜Left: The production line of early Panther tanks / Right: The appearance of the Panther is similar to that of modern tanks＞

Like the T-34, the Panther also utilised sloped armor in its construction. Because welding as a skill was prevalent in Germany at the time, both the hulls and turrets were manufactured by welding. The main gun of the Panther was 75mm, 70 caliber with a long barrel, and the muzzle velocity was higher than the 88mm gun of the Tiger tank. The appearance of the Panther was simple and smooth in the style of modern tanks. 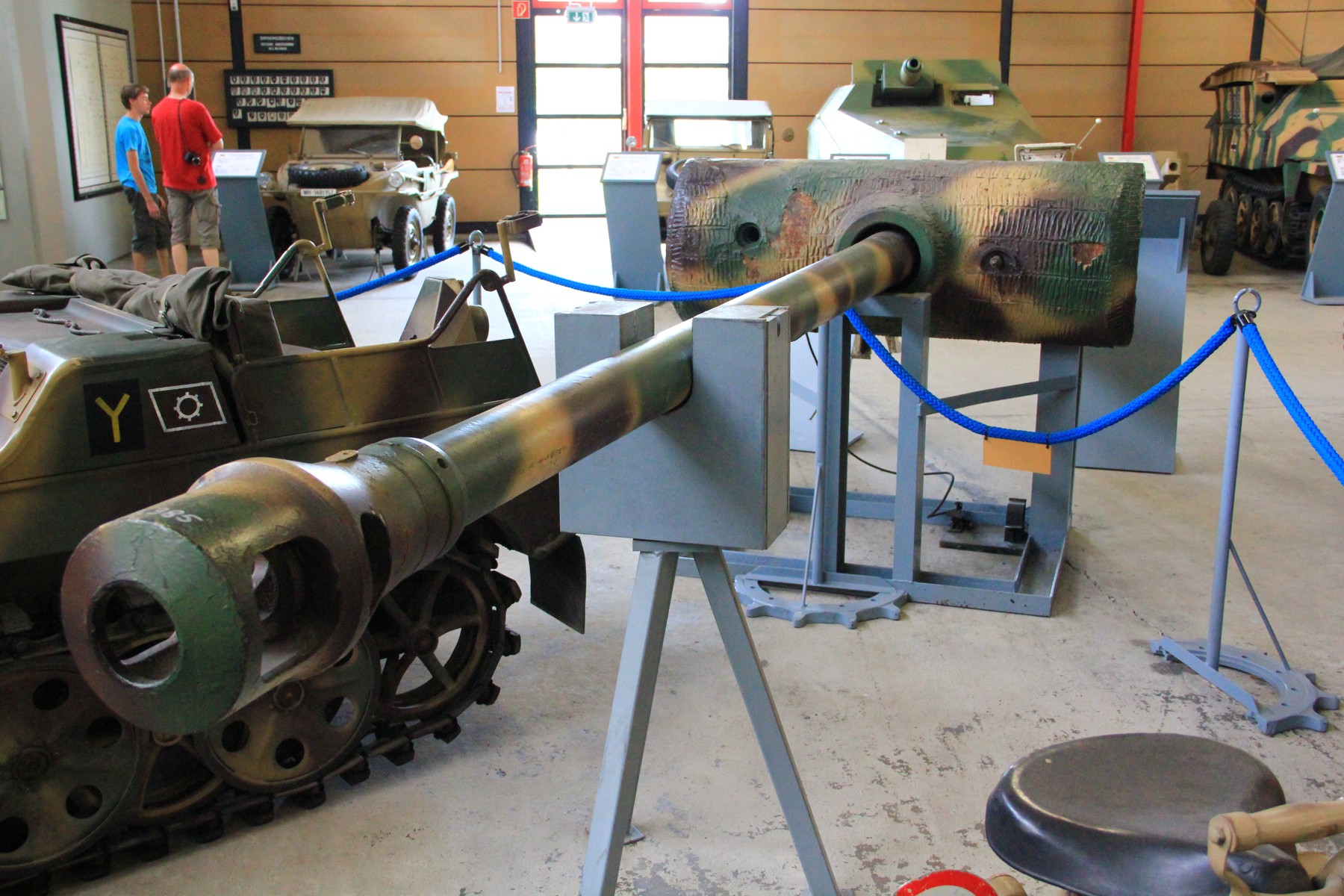 The Panther became the main battle tank of the German force soon after entering service, with more than 6,000 produced in total. Wielding a powerful main gun and the ability to reach top speeds of 46 km/hr, along with good protection provided by sloped armor, the Panther was recognized widely as the best tank in WWII. Only the Tiger tanks managed to surpass the Panther in terms of popularity and fame, due to their actions in some legendary tank battles.

During the Battle of the Bulge at the end of 1944, some German Panthers were disguised to resemble American M10 tank destroyers, sporting a green paintjob that was used by the USA. Although impressive in theory, the ruse was not an overwhelming success.

＜Left: A Panther tank in the Panzermuseum Munster, Germany / Right: the rear part of a Panther tank＞

“Caliber” means the value from the length of barrel divided by the caliber of the gun. The greater the value, the longer the barrel. A long barrel ensures a faster rotation of the shell within the barrel with the aid of the rifling within, which translates to a higher muzzle velocity, a more stable trajectory and longer range.