The Tank Battle of Hannut is said to be the first real tank battle of WWII. What led to this battle? Who finally won? What tactical and strategic significance did this battle have? Let us learn about the fierce fighting that went on at Hannut in this article.

From 12th May to 14th May 1940, the 3rd & 4th Panzer Divisions of the XVI Motorized Corps of the Wehrmacht clashed with the 1st & 2nd Light Mechanized Divisions of the French cavalry in Hannut, Belgium. This was the first large-scale tank battle of WWII. In total, 1,200 German and French tanks took part in the fighting. 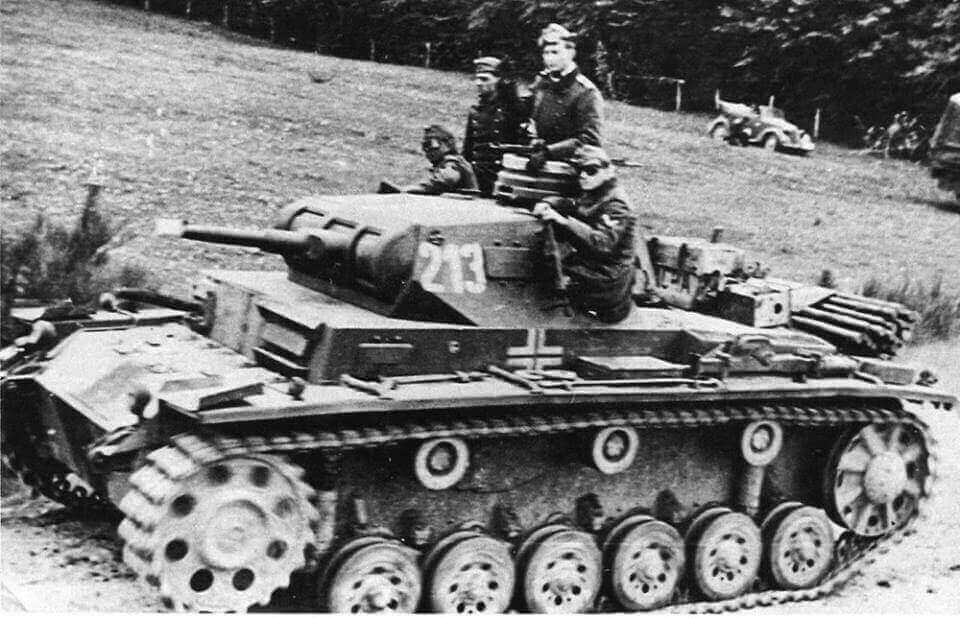 Pz IIIs formed the backbone of German armour during the invasion of Western Europe. It came equipped with a 3.7 cm gun, and faced challenging battles because the Western Allies had more heavily-armoured tanks. However, General Heinz Guderian, the German military leader who pioneered mobile armoured warfare, had ensured that German armour had a good balance between firepower, mobility and protection. This agility was the key to the German victory in the early days of World War II.

On 10 May 10, 1940, the Germans activated Fall Gelb, or “Case Yellow”. The “Panzergruppe Kleist”, the main force of Army Group A, went through the Ardennes forest between Belgium and Luxembourg, then entered north France and headed for the English Channel. At the same time, Army Group B, located farther north, entered Belgium. In this way,, they isolated the main body of the British and Frenchs force in Belgium and northern France. Panzergruppe Kleist ended up behind the Allied forces, and would aim to crush the Allies with Army Group B in a classic hammer-and-anvil move.

In order to increase the power of Army Group B, OKH allocated a Panzer Corps under Army Group B. This was the XVI Motorized Corps commanded by General Erich Hoepner. It had the 3rd and 4th Panzer Divisions, with 620 tanks in total: 498 Pz Is and IIs, 73 Pz. IIIs and 52 Pz. IVs. 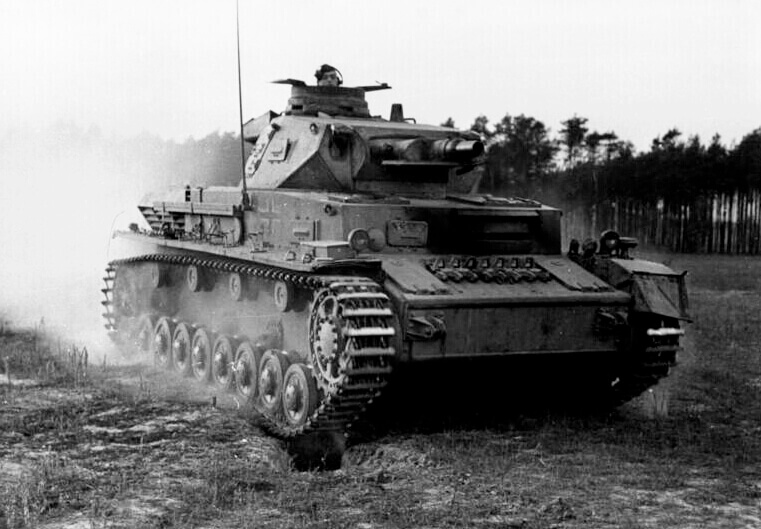 German Pz. IV B. The Pz. IV performed fire support for Pz. IIIs during this period. Its short barrel 7.5cmL/24 gun could only destroy armoured vehicles if it used HEAT ammo.

On the other hand, the commanders of the French and British troops had thought that the Ardennes Forest was impassable. They believed that the Germans would enter northern France through Belgium, just like they did in WWI. Because Belgium was in neutral, Allied forces could not deploy along border between Belgium and Germany, and they had to wait for German forces to take action first.

As mentioned in Allied plans, their troops would across the border between Belgium and France, and then push to the river Dyle after the Germans invaded Belgium. The Allies would then form a continuous defence line to prevent German forces from advancing. According to Allied military doctrine, they would build and fortify line after line of defences to resist the German invasion, reminiscent of static defence lines built during WWI. 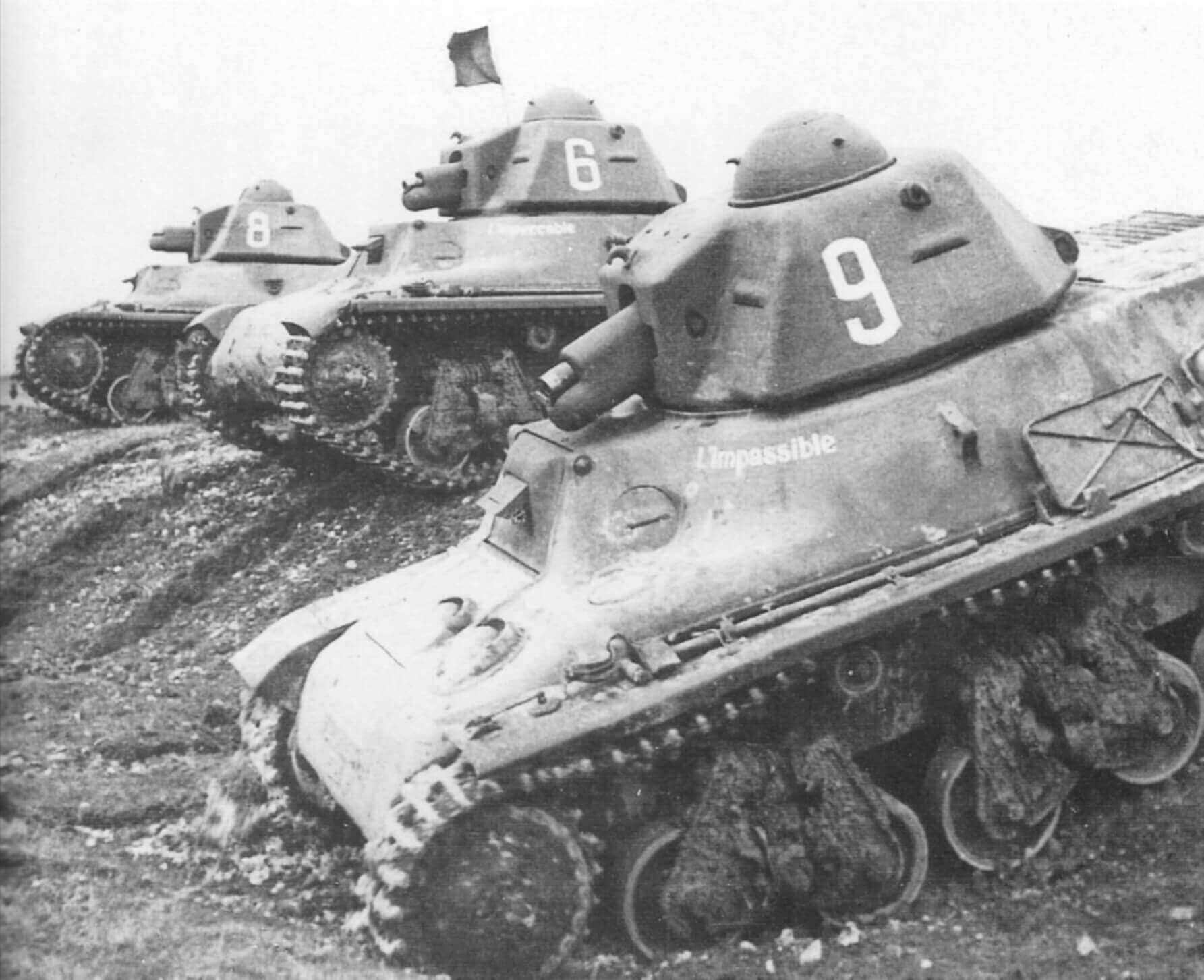 H35 light tanks of the 2nd Regiment, 3rd Light Mechanised Division of the French army during field manoeuvres. The French had developed their tanks with a focus on mechanised cavalry. Their 4 mechanised divisions were full of high-quality personnel and equipment.

The mission of the French cavalry was to stall the advancement of German forces and buy time for the main body of the Allies to deploy. The “Corps de Cavalerie" was a fully mechanised unit force consisting of the 2nd and 3rd Light Mechanised Divisions. The “Division Légère Mécanique" was a traditionally famous cavalry force, which was mechanised by the French army and equipped with modern armoured vehicles. These two Light Mechanised Divisions had 600 tanks and vehicles, including 239 Somua S35 tanks, 172 H35 tanks, 66 AMR35 tanks and 90 Panhard 178 armoured scout cars.

After the war began, The French cavalry corps entered Belgium and headed for the strategically important Gembloux Gap. These two Light Mechanised Divisions pushed to the village of Hannut and deployed there in order to cover the Gembloux gap. In the meantime, the German XVI Motorized Corps broke through Dutch and Belgian positions and raced towards the Gembloux gap. A great tank battle would break out soon.

Tanks from 35th Regiment, 4th Panzer Division spread out in attack formation on the first day of Hannut tank battle. In this photo we can see Pz. I, Pz. II and Pz. III. Unlike the French, the Germans concentrated their tanks in large formations intended to break through enemy lines and create openings for the rest of their forces.

In the morning on 12th May, German armour formed a wedge-shaped formation and charged into French positions near Hannut. Intense fighting broke out everywhere. On this day, the German advance was stopped by fierce resistance from the French armoured cavalry. On the second day, the Germans attacked again. General Hoepner ordered his troops to concentrate their attack on one point of the French line.

Because the French forces were spread evenly, the 3rd Light Mechanized Division came under heavy pressure from a concentrated German attack. Spoiling attacks by German infantry units also prevented nearby French forces didn’t support right away. With the help of the Luftwaffe, the German XVI Motorised Corps broke through French defences along Dirlemont-Hannut-Huy. French cavalry corps withdrew to Perwez right away, with German armour hot on their heels. The Germans were stopped there on the second day, and the tank battle of Hannut came to an end. 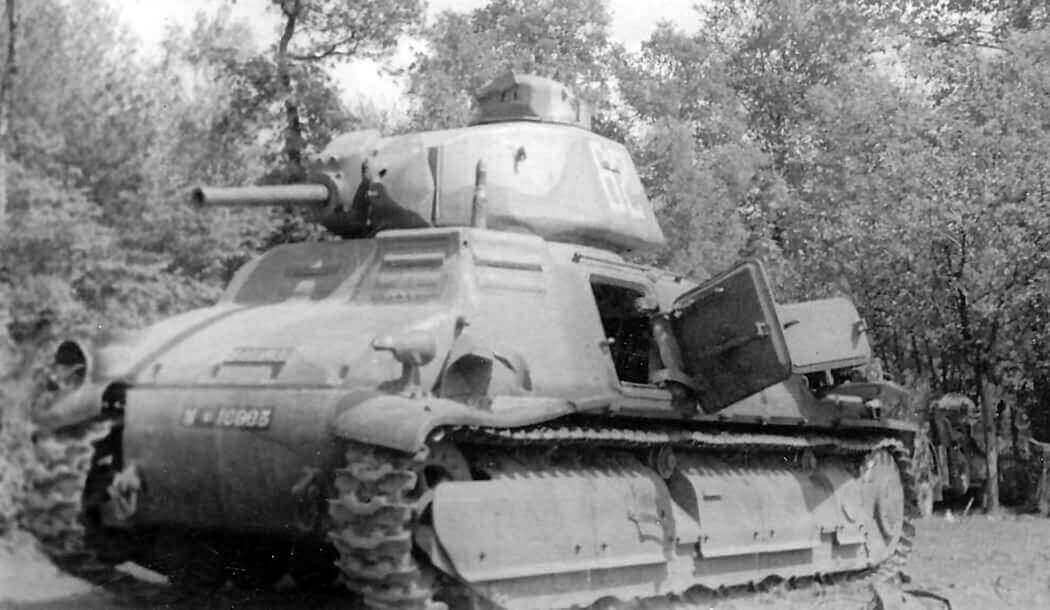 Destroyed Somua S35, abandoned by its crew. It was a good tank with excellent protection.  In the Tank Battle of Hannut, French troops stopped the advance of German armored force successfully, but they couldn't repair hit tanks that could be repaired because they lost control of battlefield.

German armoured units took severe losses. Although the German Panzer Divisions maintained their large formations during this period (two brigades; four regiments), their tanks were mostly the light Pz. Is and Pz. IIs. There were not many main battle tanks such as the Pz. III E, and they were still equipped with 3.7cm KwK L/45 guns, which were not sufficiently powerful against the hard-skinned S35 and H35 French tanks. Only Pz. IVs with their 7.5 cm guns could fight against the French tanks.

Most German tank crews could fight the French tanks only with personal resolution and courage by flanking them and attacking weak points to their sides and rears. Due to the inferior firepower and armour on most of their tanks, the Germans suffered heavily. 160 German tanks were destroyed by French tanks. However, because the Germans took control of the battlefield in the end, most of their damaged and destroyed tanks were repaired and sent back into service. In the end, the Germans lost 49 tanks damaged beyond repair, whereas the French cavalry corps lost 121 tanks.

The Tank Battle of Hannut was the first clash between German and French armored doctrines, including tank design concepts and combat tactics. According to General Guderian, the bulk of the German armour, consisting of Pz. IIIs and Pz. IVs, had a good balance between firepower, mobility and armor, and were capable of of long-distance pursuit. This enabled the German tanks to execute the “Blitzkrieg”, or lightning war.

Combat effectiveness of German armour was much higher as well, because their tanks were manned by 5 crewmen. This reduced reaction time and spread out the stress placed on the tank crew. The French, on the other hand, stressed the importance of armor over mobility. Their vehicles were more suited to static defense. Although their heavy armour gave the German tank crews plenty of grief, they lost strategically because the Germans could contro lthe battlefield and outflank them at every juncture. The French lost 30 S35 tanks in this battle, some of which were abandoned by their crew because they ran out of fuel. The insufficient combat radius was the main weakness in French tanks. 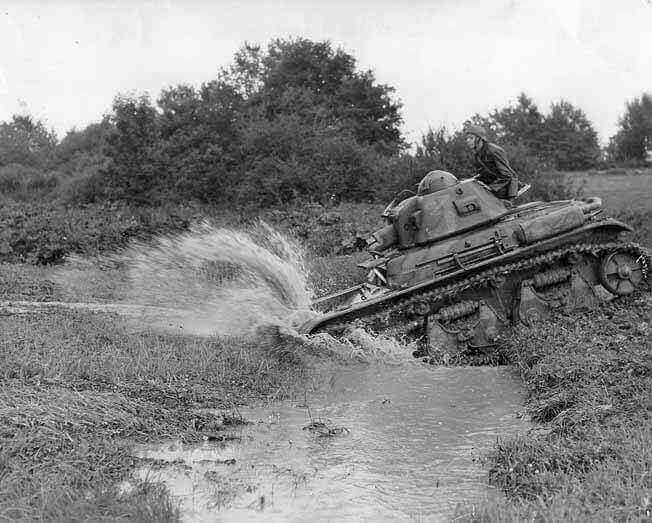 An R35 light tank crossing a swamp. This vehicle was developed with cavalry missions in mind. Most French tanks were equipped with turrets operated only by tank commanders, which placed a heavy workload on their tank commanders. It prevented them from understanding the overall situation of the battlefield.

The Cavalry Corps was the main mechanised strike force of the French military. Because of mission requirements, the French Light Mechanized Divisions deployed their tanks thinly across long lines on the battlefield, so they lost many to attrition. On the other hand, the Germans concentrated their tanks on a single key point and gained the decisive advantage in battle.

Although the French cavalry fought hard during the tank battle of Hannut and achieved their objective of stalling the German advance, they were still defeated by the Germans. Despite being stopped at the strategic Gembloux gap for three days and having to watch the Allied forces deploy along the river Dyle, the Germans still managed to win strategically... In the Ardennes to the south, German Panzergruppe Kleist had secretly crossed the mountainous terrain in preparation for the most threatening and lethal blitz against the Allies.