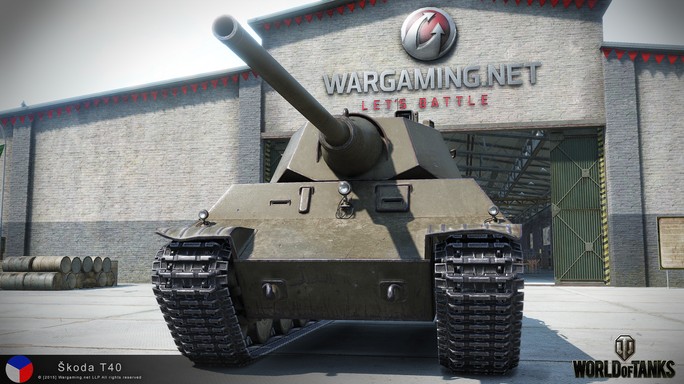 During World War Two, Czechoslovakia was under German occupation for about six years. Throughout these years under occupation, the country's powerful military industry had to work to meet the needs of the Third Reich. By the time Germany was defeated, the Czechoslovaks had gained vast experience and knowledge of best practices in the manufacture of arms and armour. Along with that, they had also inherited a wealth of technical documentation, which made good reference material for future projects.

The first postwar decade was turbulent. Czechoslovakia was hard at work rebuilding its armed forces and trying to regain its former stature as one of the foremost tank developers in the world. For economic and political reasons, however, most projects of that time did not reach the prototyping stage, let alone enter mass production. However, they are monuments to technical advancement, and deserve to be studied in detail. One such project is the Škoda Т 40 medium tank. 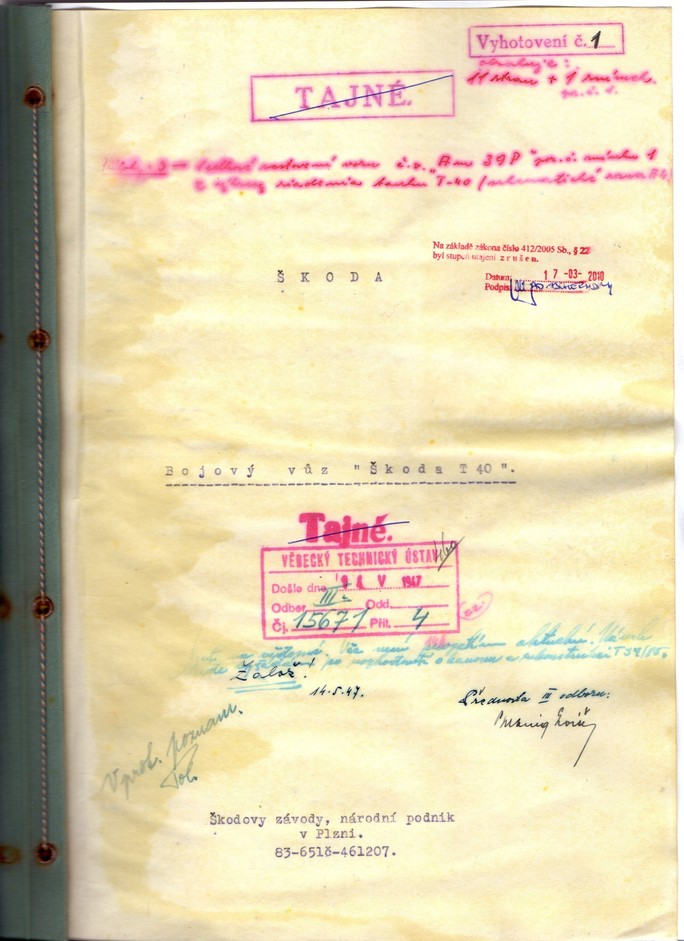 In 1945, the military issued technical requirements for a vehicle called Tank Všeobecného Použití (TVP), or "general purpose tank". As envisioned by the military, this medium tank was supposed to feature 65-mm armour, an 88-mm gun, and a top speed of 50 km/h. A coaxial machinegun with a flame thrower was also to be included as additional armament.

Based on this concept, specialists at the VTU (Military Technical University) made a tremendous effort and created a whole set of tanks that differed in several components. A famous historian, Martin Dubánek, included Škoda’s project when describing this set of tanks in his landmark text on Czechoslovakian tank development. This misclassification was later identified and corrected by Jiří Tintěra, another Czech historian. Despite the fact that VTU and Škoda had something in common, they followed different paths in terms of design philosophy. This necessitated the reclassification.

The VTU project’s proposed tank and its characteristics were only available as a concept, rather than a thoroughly prepared technical solution. The tank was supposed to feature a leaf spring suspension, six roadwheels, and three support rollers. The suspension’s design schematics were complicated enough to require a long and detailed elaboration. It was unclear what engine was to be installed in the vehicle.

Škoda engineers, on the other hand, had prepared their design and performed necessary calculations for their medium tank. There were some minor similarities in external elements and design, but the two tanks greatly differed from each other. 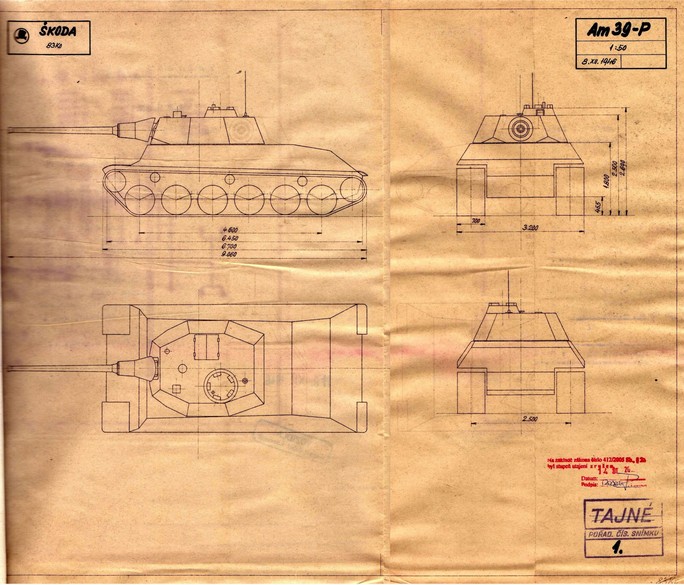 The VTU tank’s turret was designed with a complex shape, which incorporated a V-shaped front plate. The Škoda Т 40’s design was more advanced and bore a strong resemblance to comparable German vehicles manufactured by Krupp. One such resemblance is the T 40’s gun mantlet, which was similar to those produced by Krupp. This resemblance is not mere coincidence: during World War II, Škoda manufacturing plants produced hulls and turrets for the Tiger II heavy tank.

To meet the stipulated requirements for the main gun, engineers chose an 8,8 cm gun. This gun was similar to the German KwK 36 L/56 gun mounted in the Tiger turret. The only difference was that the Czechoslovakian variant did not have a muzzle brake The Germans had planned to mount it in the experimental narrow turret (Schmalturm) intended as an upgrade for the Panther medium tank, as well. The idea of equipping the tank with a flame thrower was eventually brushed aside, and a coaxial machinegun was mounted instead.

Unlike the VTU, Škoda did not face any problems choosing an engine for their vehicle. They had a ready-made solution: the Škoda 16ADH140, an X-type air-cooled diesel engine (700 h.p. at 2,000 r/min). Although its performance was below the stipulated requirements for power-to-weight ratio, the engine could accelerate the tank to 50 km/h, which was the required top speed. Also, a more advanced torsion suspension was used instead of the leaf spring one.

The main problem faced by the Škoda Т 40 (and TVP) was weak armour. However, this was a limitation imposed by the requesters: the requirements for the tank were based on the U.S.S.R.’s T-34-85 tank, which was not the most heavily armoured vehicle in 1945.

The Tank That Could've Been

In conclusion, this design by Škoda specialists was fairly innovative and incorporated an interesting combination of features in its design. The creators of the tank did not simply copy Soviet or German technical solutions. Instead, they combined the experience and knowledge of the two greatest tank producers in the world in the design of a well-balanced and distinctive vehicle, which unfortunately existed only in blueprints.