The Allied invasion of Normandy was only the beginning of the campaign to end Axis domination over Europe. In order to achieve their campaign objectives, the Allies launched Operation Cobra in the summer of 1944.

On 6th June 1944, the Allies launched Operation Overlord during which they invaded Normandy in northern France to create a second front in Europe. During this operation, they faced heavy resistance from the Wehrmacht all along the newly-created Western Front. Initially, the commander of the Allied Forces in northern France, Field Marshall Bernard Law Montgomery, focused the offence on the the French town of Caen. However, the Allies faced heavy resistance from the Wehrmacht's 7th Army and 5th Panzer Army, suffering heavy losses in exchange for little progress. At the same time, the American 1st Army was focused on capturing the deep-water port of Cherbourg on Cotentin Peninsula, so they could not spare any forces to fight in Normandy to the east. It seemed that the campaign to take northern France head reached a point of deadlock.

In an attempt to change this problematic situation, the Allied commanders developed a new strategy in July. While planning the Allies' next move, Montgomery decided to try to take advantage of present circumstances. Most units from Army Group B of Oberbefehlshaber West were located in the vicinity of Caen, and were constantly fighting the British 2nd Army under Gen. Miles Dempsey's command. As long as the 2nd Army continuously pressed the attack on Caen, Army Group B would be preoccupied with fighting them, giving the Allied Forces an opportunity to break through. Montgomery ordered the British 2nd Army to keep pressing Caen in order to provide the American 1st Army with with an opening to break through the narrow front at Saint-Lô to the west. In the vicinity of Saint-Lô , the Germans had in total 7 Panzer Divisions and 3 heavy tank battalions.

On 18th July 1944, the British 2nd Army launched Operation Goodwood in support of Operation Cobra. 3 armoured divisions and 2 infantry divisions advanced on Caen. Prior to this attack, the Allies carpet-bombed the German defenders at Caen with 2,000 medium and heavy bombers for 2 hours. After the air attack, 1,100 tanks moved out and attacked German strongholds, but they were mired by the depth of the German defences. They could not gain any decisive breakthrough and suffered severe losses. On the first day of the offensive, the British lost over 400 M4 Sherman medium tanks. Despite severe losses, however, Operation Goodwood still achieved great tactical results as expected. The Panzer Divisions from 5th Panzer Army were now tied up in intense large-scale engagements.

It was now the American 1st Army’s turn to act. The Americans launched Operation Cobra with 8 infantry divisions, 3 armoured divisions (with the 2nd, 3rd, and 4th Armoured Division in reserve). Altogether, 1,400 M4 Sherman medium tanks, 690 M5A1 Stuart light tanks, and 280 M10 tank destroyers joined this Operation. After the 1st Army completed the breakthrough in Saint-Lô, the 3rd Army under General George S. Patton would sweep through Brittany and capture French seaports for the Allied Forces. 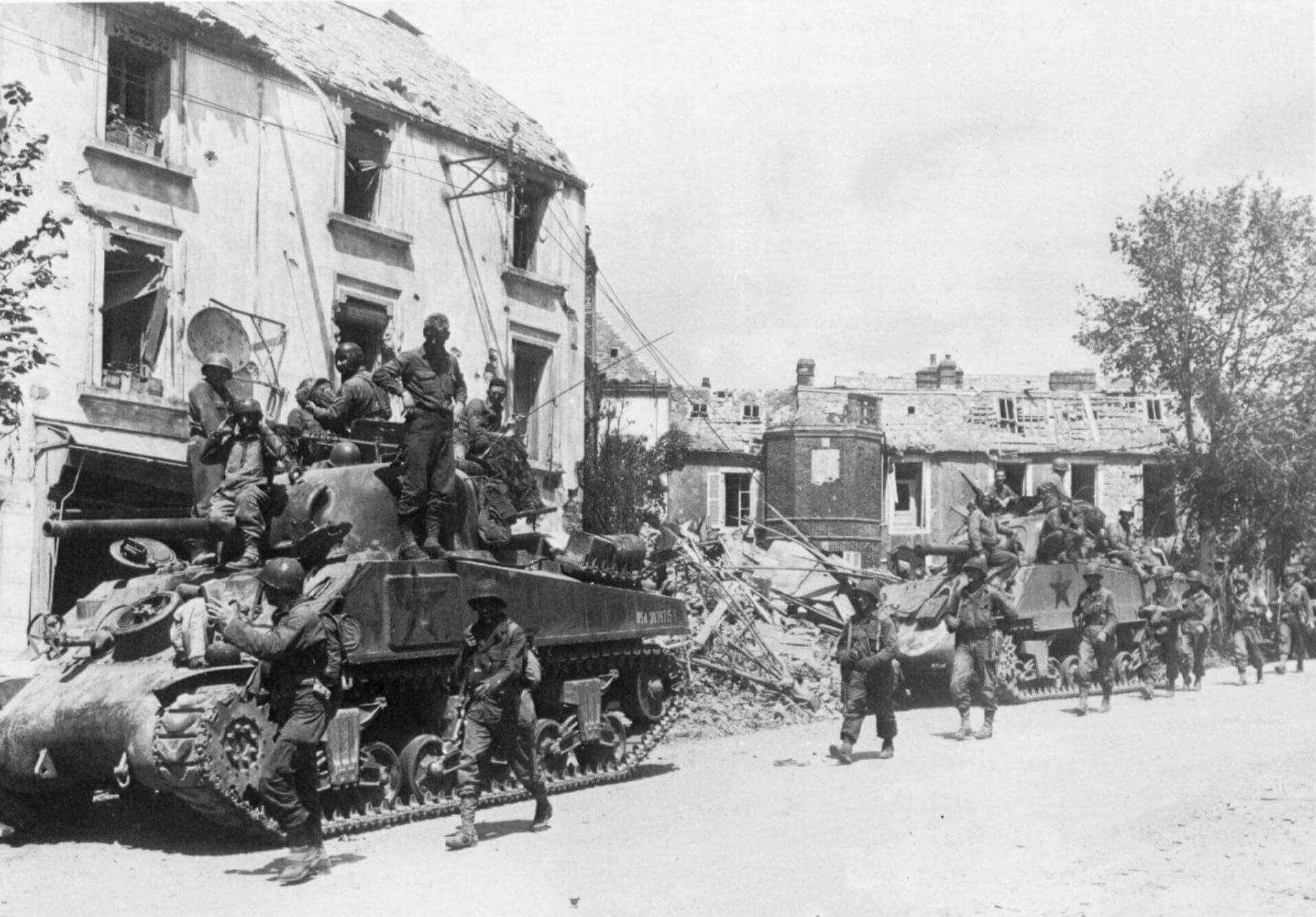 Due to bad weather, the Allies could not launch the air raid on scheduled date, so operation was postponed to 25th July. In the previous battle, the American 25th and 39th Infantry Divisions finally occupied the hill that towered over Saint-Lô at the cost of 5,000 casualties. However, the Wehrmacht's 2nd Parachute Corps and 352nd Infantry Division still occupied the ruins of Saint-Lô.

On 25th July, the weather was good, and so the 1,800 bombers from 8th Air Force dropped 3,300 tons of bombs on an area 5,500m wide by 2,000m long. It was so effective that the Germans were almost paralysed. The elite Panzer Lehr Division was almost eliminated during the air raid. Panzer IVs and Vs were flipped over on the road, defensive positions were destroyed, lucky survivors hid in now-unrecognisable terrain, and the chain of command collapsed. The American 7th Army soon opened a path through the German defensive line. 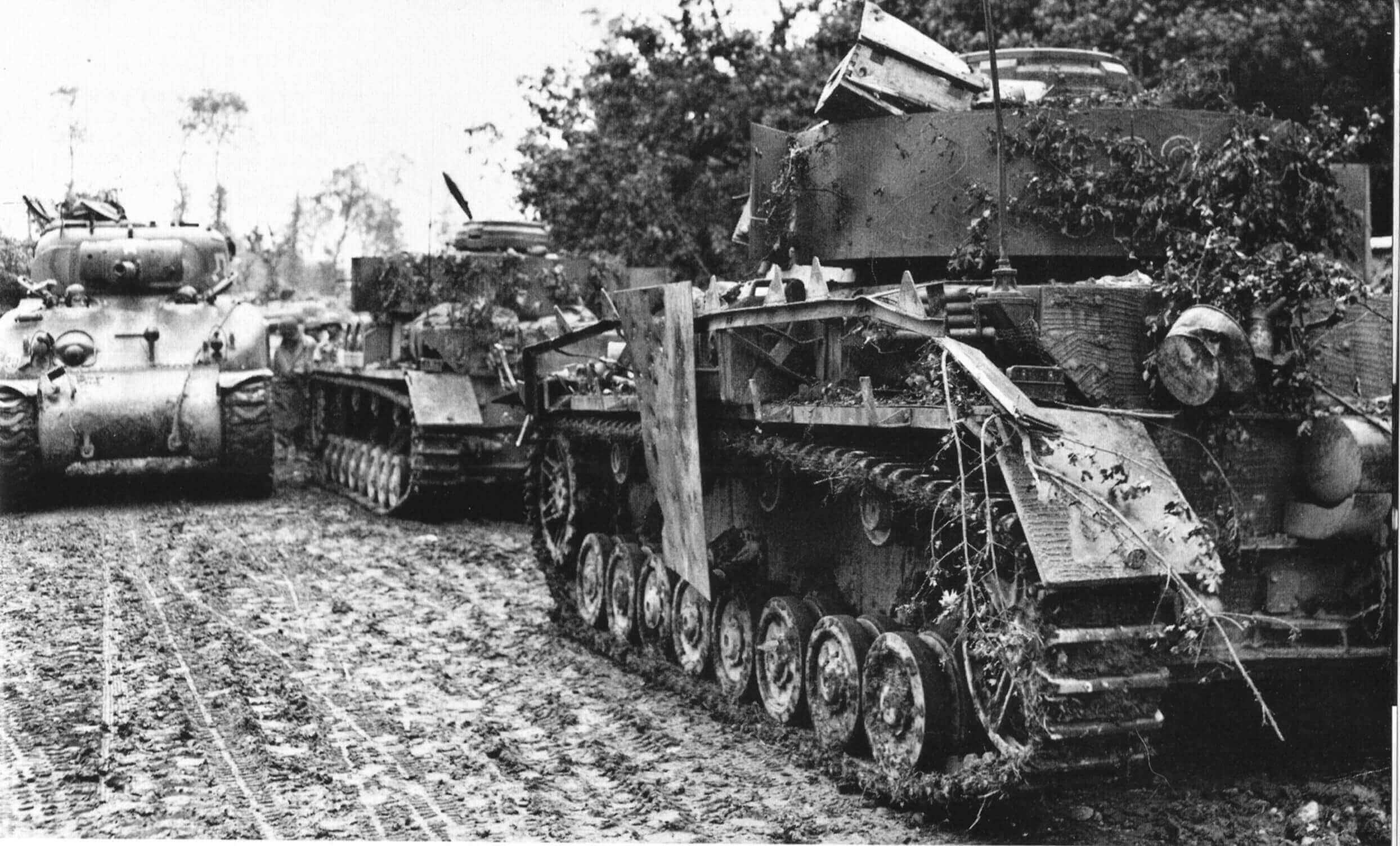 During Operation Cobra, M4A1(75) Shermans from the 30th Infantry Division pass a destroyed Panzer IV H from the 2nd SS Panzer Division "Das Reich". Although they had done their best, they could not turn the situation around in the face of the Allied Forces’ air supremacy and superior logistics.

To further expedite the operation, the American Army's engineers installed modifications such as "tusks" to the fronts of M4 Shermans to enable them to effectively breach the bocage. The bocage was a common feature all across northern France that farmers used to separate adjoining fields. Before the installation of such modifications, tanks had to run over the hedgerows to clear paths. American armoured infantry found that the front of tank would run up the hedgerow and expose its weak underside, providing excellent opportunities for the Germans to destroy American tanks. This was a thorn in the side of American armoured troops until early July, when a young sergeant from 102nd Cavalry Regiment suggested installing "tusks" on the fronts of M4 Shermans so that they could clear the bocage safely. They took this advice quickly, and the Americans quickly installed these modifications on M4 Shermans intended for clearing the bocage. To gather enough steel making hedgerow, they even dismantled railways in Normandy to produce thsoe modifications. The M4 Sherman with hedge-breaching "tusks" played important role in this operation. 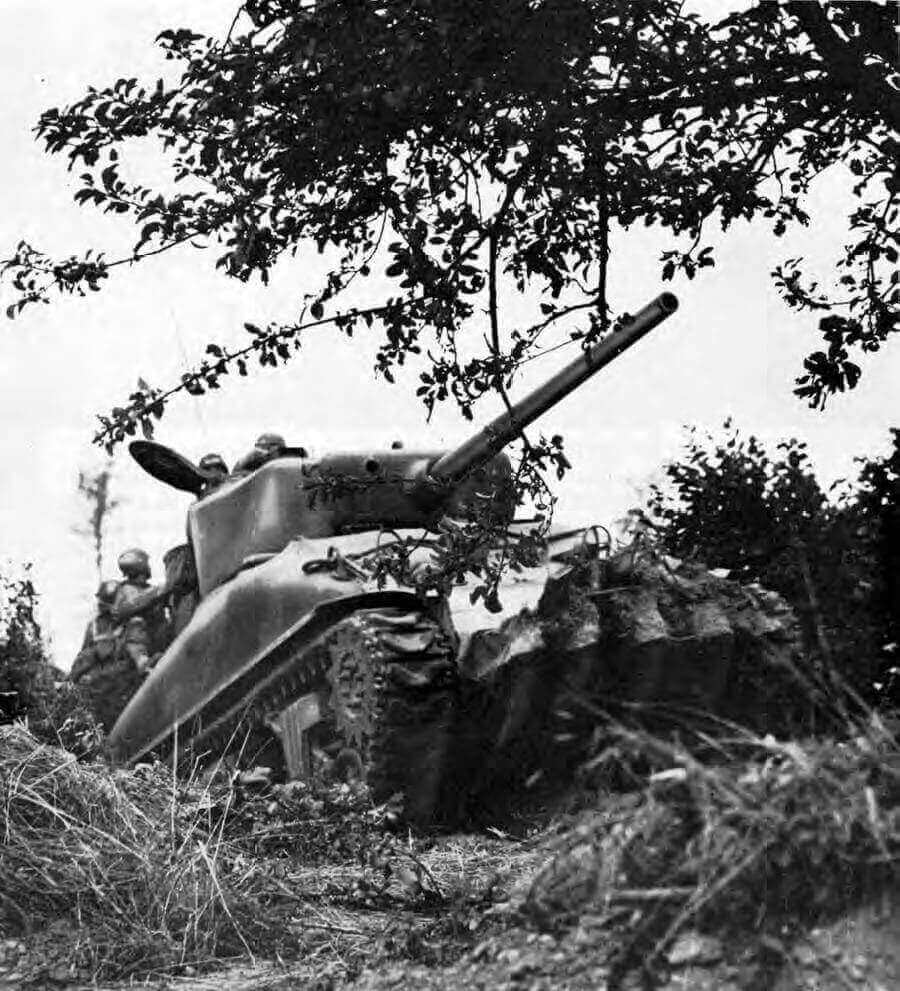 To clear the bocage in the countryside of Northern France, the Americans installed modifications on the fronts of M4 Shermans. This is an example of infantry accompanying an M4A1(76)W Sherman with such modifications.

The Americans deployed troops and broke southwards according to plan. The American 4th Armoured Division entered the battlefield after the 2nd and 3rd Armoured Divisions. To plug the gap that formed after the Panzer Lehr Division collapsed, 2nd SS Panzer Division counterattacked quickly. However, this was a futile effort in the face of the Allied Forces’ air supremacy. The American 7th and 8th Corps broke through German defences.

Although the Americans gained the upper hand through Operation Cobra, the Germans still delivered a devastating blow to the Americans through the acts of individual Panzer Corps soldiers. On 27th July, Unterscharführer Ernst Barkmann from the 2nd SS Panzer Division "Das Reich" performed one such act, destroying a convoy from the 2nd Armoured Division. 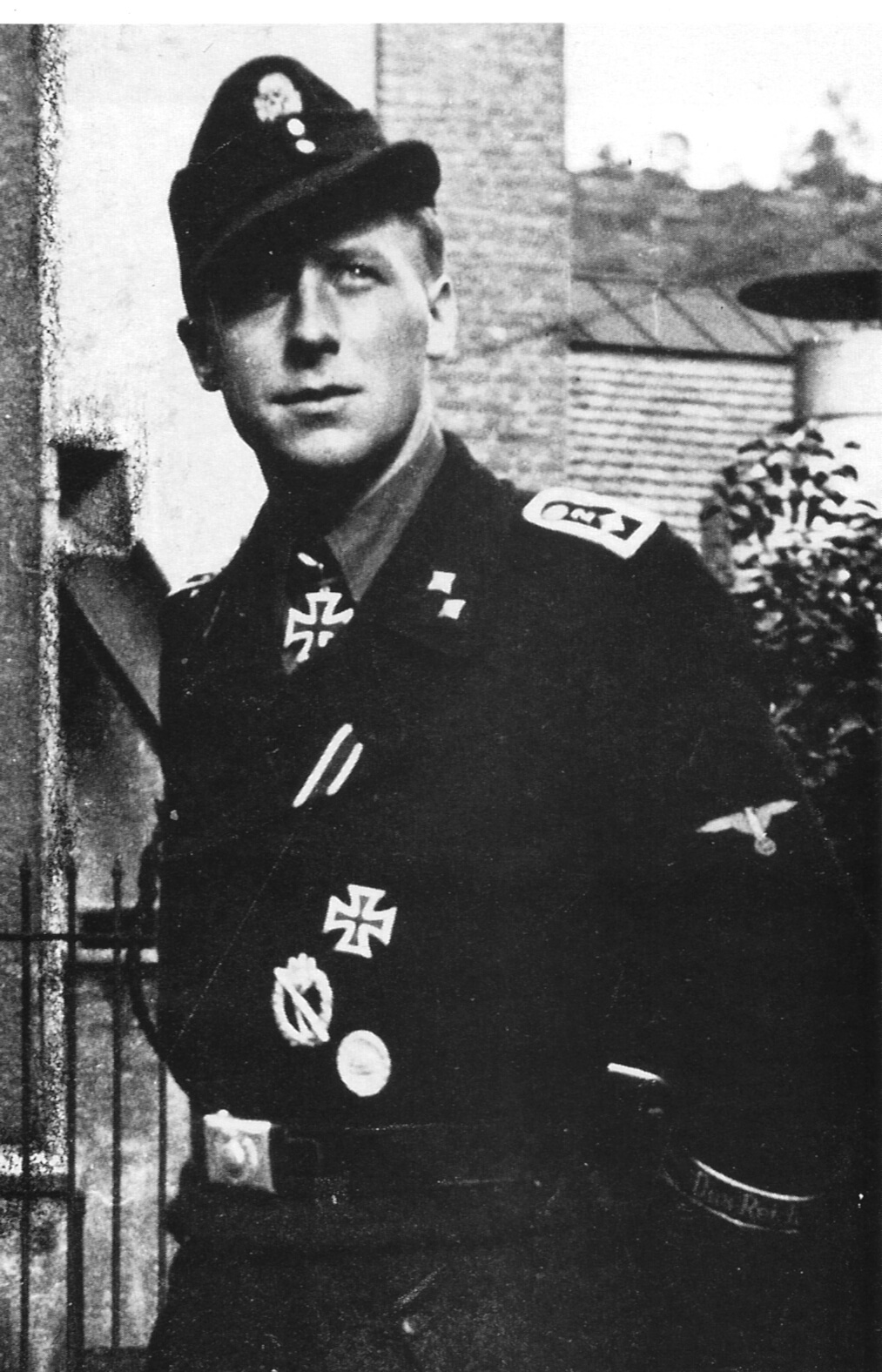 Barkman and his Panther 424 took down 9 M4 Shermans by themselves.

On the second day of Operation Cobra, Barkman’s Panther 424 broke down on the way to an engagement. Thanks to maintenance units’ efforts, Panther 424 hit the road again in the morning on the 27th. Barkman was anxious to rendezvous with his company along the Coutances-Saint-Lô Road. However, he ran into an American convoy from Saint-Lô led by 2 M4 Shermans. Barkman kept moving under the cover of the bocage, moving Panther 424 to a crossroads where they hid under an oak tree. It was here that he decided to engage the Americans. 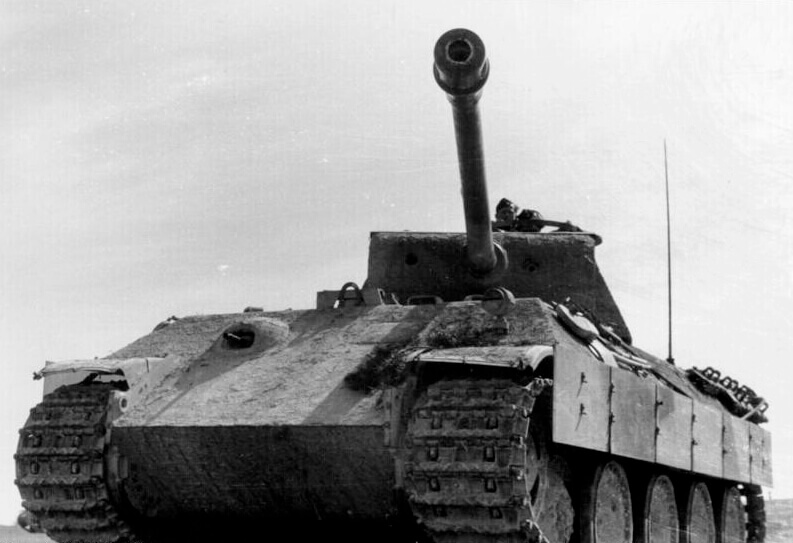 The Panzer V was a powerful tank inspired by Soviet T-34. In the ensuing encounters, the Panzer V - also known as the Panther - demonstrated its excellent firepower and armour protection.

When the leading M4 Sherman came within a range of 200m, Panther 424 opened fire, knocking out this first M4 with a single AP round. They then engaged the second one, putting out of action as well. After the leading tanks were destroyed, the convoy stopped and turned around to escape. Panther 424 shot at them with its machinegun and HE shells. M3A1 halftracks, 2½-ton trucks and jeeps were destroyed. Here, the Americans suffered severe losses.

It was at this time that 2 M4 Shermans appeared to the left of the road. A battle ensued, in which Barkman knocked out the first M4 with a single shell. However, the other one was not an easy target. Before Barkman could knock him out, 2 75mm AP shells hit Panther 424. The incoming rounds bounced off the Panther's heavy sloped armour. The Americans called in air strikes to take Panther 424 out. Their bombs exploded near Panther 424, one of them even exploding within 5m. However, Panther 424 remained intact and fit for combat.

Other American tanks then arrived on the battlefield, attempting to flank Panther 424. Panther 424 took 2 more direct hits, in response to which Barkman turned his turret to knock the attacking M4 Sherman out with 2 shells, followed by another one shortly afterwards. However, this face-off was not entirely in Barkman’s favour. Panther 424 suffered some direct hits, which broke the track and tore off one side armor plate. However, the damage suffered was small in comparison to the damage they had done: in this tank battle, Barkman and his crew took out 9 M4 Shermans and numerous other vehicles by themselves.

However, Barkman’s achievements meant little when considered on a the strategic scale. It had been a tactical victory in favour of the Germans, but it could not salvage the situation for the German army. The Americans had torn a hole in the German lines, meaning that Operation Cobra had succeeded. The way was open for Patton’s 3rd Army to sweep across northern France.

Text and photos are provided by Alte Kamerade Publishing Studio.