The Battle of Kursk: Myth and Reality

The Battle of Kursk – “The Gully of Death”

An Attempt to Separate Myth from Reality 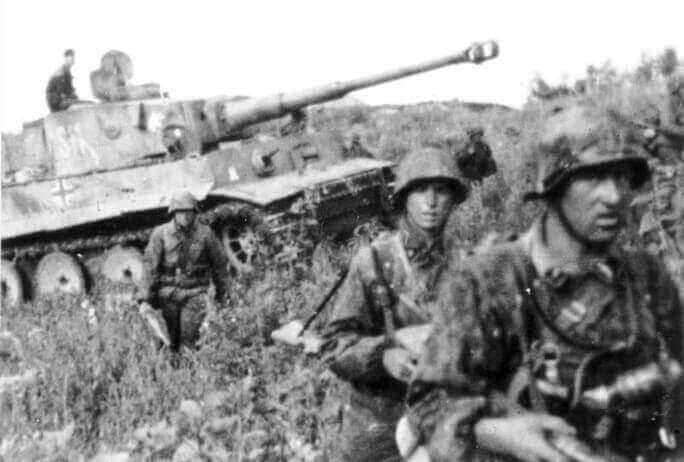 Following their defeat at Stalingrad during the winter of 1942-43, the German armed forces launched a climactic offensive in the East, known as Operation Citadel, on 4 July 1943. The climax of Operation Citadel, the Battle of Kursk, involved as many as 6,000 tanks, 4,000 aircraft and 2 million fighting men, and is remembered, rightly or wrongly, as the greatest tank battle in history. There are massive differences between historians over the events of this time, and it still remains a slice of history surrounded by myth and speculation. Even now, new information is being found as new archives are unearthed that have previously remained buried and hidden. As an example, the Waffen SS formation records were not declassified until around 1981, by which time many so-called ‘historical reports’ had already been produced. 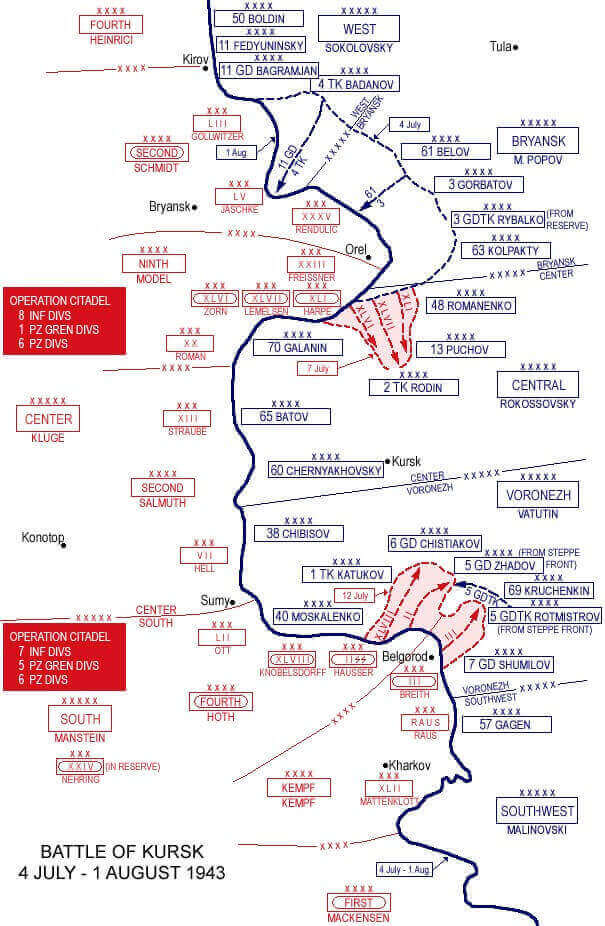 German penetration during the Battle of Kursk

The most discussed battle was the one that occurred at Prochorovka (also spelled Prokhorovka as many of you will recognize), which began on 12 July. Here again, historians hailed Prochorovka as a victory of improved Soviet tactics over German firepower and heavy tanks, relatively new evidence shows the events at the 'gully of death' in a somewhat different way. 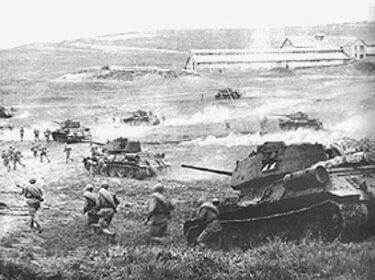 The Germans' main aim during Citadel was to secure a large salient in the Eastern Front that extended 70 miles toward the west. Field Marshal Günther von Kluge's Army Group Center would attack from the north flank, with the Ninth Army leading the effort, the XLVI Panzer Corps on the right flank, and the XLI Panzer Corps on the left. General Joachim Lemelsen's XLVII Panzer Corps planned to drive toward Kursk and meet up with Field Marshal Erich von Manstein's Army Group South, the Fourth Panzer Army and the Kempf Army.

Facing the German forces were the Soviet Central Front, led by General Konstantin K. Rokossovsky, and the Voronezh Front, led by General Nikolai F. Vatutin. The Central Front, with the right wing strengthened by the Thirteenth Army and Seventeenth Army, was to defend the northern sector. To the south, the Voronezh Front faced the German Army Group South with three armies and two in reserve. The Sixth and Seventh Guards Army held the center and left wing. East of Kursk, Col. Gen. Ivan S. Konev's Steppe Military District (renamed the Steppe Front on 10 July, 1943) was to hold German breakthroughs, then mount the counteroffensive. 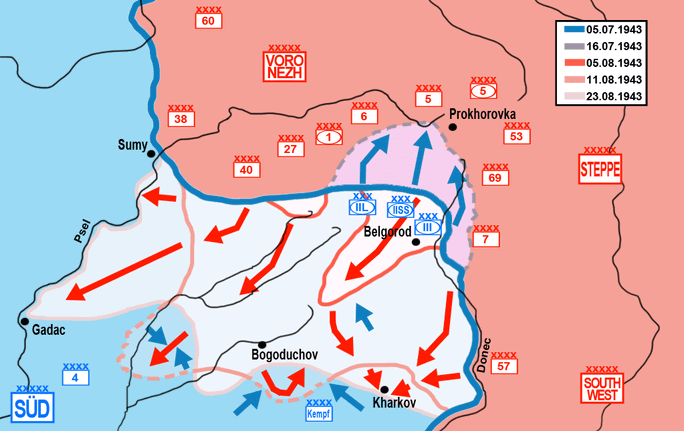 The potential was there, if all went to plan, for the Germans to destroy in excess of five Soviet armies, however the Ninth Army never came close to defeating the Soviet defences to the North and likewise, the III Panzer Corps faced tough opposition. Finally, on 11 July, the Fourth Panzer Army were in a position to capture the town of Prochorovka and establish a vital bridgehead over the River Psel. 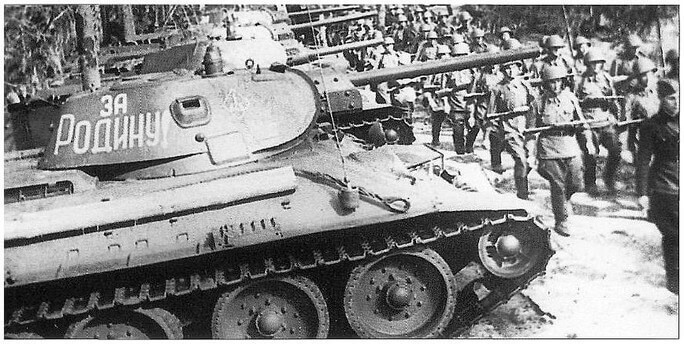 As mentioned, this action is one of the best known battles on the Eastern Front, and has been included in books, films and documentaries everywhere. Some are works of pure fiction and many varying accounts exist.

The most commonly accepted version is that three SS Divisions, side by side, attacked Prochorovka over tight and difficult terrain. Between 500 and 700 German Tanks, which included MK V Panthers and the famous Mark VI Tiger, with the potent 88mm, advanced slowly. The Soviets in their agile T-34s threw themselves amongst them, causing confusion and chaos and not allowing the range of the 88s to gain the upper hand.

The result was close to 400 German vehicles being lost.

The Issue at Hand

If you study the combat records and strength reports of II SS Panzer Corps, it reports only moderate losses. Reports of numbers of tanks involved also vary wildly. In fact, the report shows that, by 11 July, the II SS Panzer Corps had a total of 211 operational tanks – Totenkopf had 94 tanks, Leibstandarte had only 56, and Das Reich possessed just 61. Only 15 Tiger tanks were still in action at Prochorovka, and there were no SS Panthers available.

On 13 July, the Fourth Panzer Army combat reports declared that the II SS Panzer Corps had 163 operational tanks; a loss of only 48 tanks. In comparison, Soviet reports show that on 13 July, the army lost 400 tanks to repairable damage.

In addition, if you consider the statement about all three SS divisions attacking side by side, this is both untrue and tactically impossible when you consider that the II SS Panzer Corps had a front of nine miles wide.

12 July, 5am – Hundreds of Soviet T-34s and T-70s (with infantry on top) advanced from Prochorovka in groups of between 40 and 50. Infantry dismounted and the tanks continued the advance into the German lines. There was a pause in the attack and Leibstandarte pushed its armour towards the town and collided with elements of Rotmistrov's reserve armour. A Soviet attack by the 181st Tank Regiment was defeated by several SS Tigers, one of which, the 13th (heavy) Company of the 1st SS Panzer Regiment, was commanded by 2nd Lt. Michael Wittmann, the most successful tank commander of the war.

Wittmann's group was advancing in flank support of the German main attack when it was engaged by the Soviet tank regiment at long range. The Soviet charge, straight at the Tigers over open ground, was suicidal as the frontal armour of the Tiger was more than a match for the 76mm guns of the T-34s at distance. None of the Tigers were destroyed but the 181st Tank Regiment was annihilated. Late in the day, the last Soviet reserves, elements of the V Mechanized Corps, were deployed. This finally halted Leibstandarte. 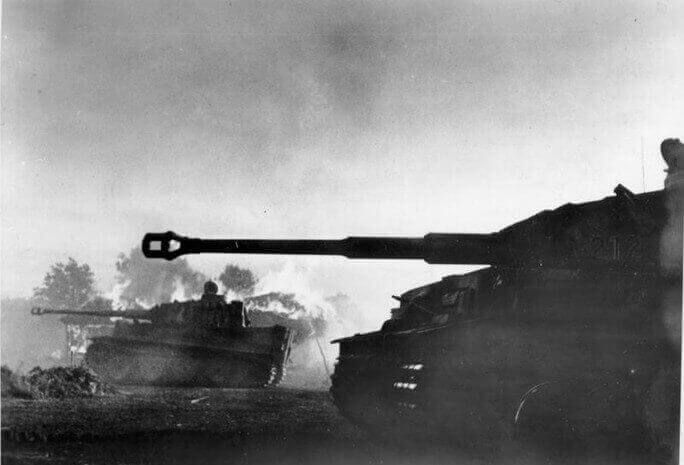 Tiger I tanks spearhead the assault

Das Reich attacked southwest of Prochorovka and was quickly engaged by battle groups of the II Tank Corps and II Guards Tank Corps. Battle groups of 20 to 40 Soviet tanks, supported by infantry and ground-attack planes, met with Das Reichregimental spearheads. The Soviets continued to push armor against the division and combat raged throughout the day, with heavy losses of Soviet armour. Das Reich continued to push slowly eastward, advancing into the night while suffering relatively light tank losses.

Meanwhile, on the left flank, elements of the Soviet First Tank Army unsuccessfully tried to retake the bridgehead. The SS division fought off the XXXI and X Tank Corps, supported by units of the XXXIII Rifle Corps. 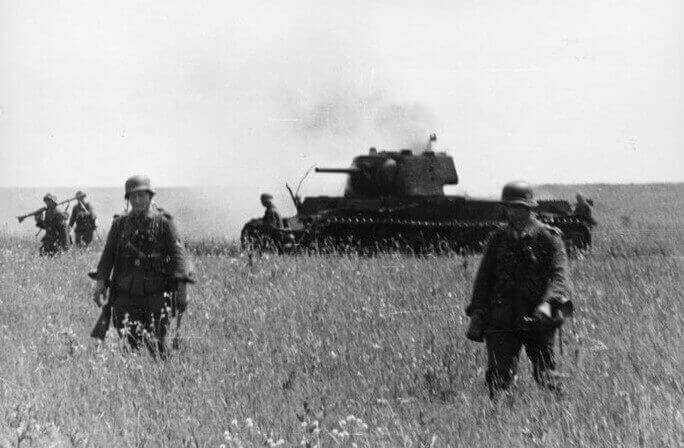 The fighting, characterized by massive losses of Soviet armor, continued throughout 12 July without really any decisive success by either side – contrary to the accounts given in many well-known studies of the Eastern Front, which state that the fighting ended on 12 July with a decisive German defeat. Many historians have said the battlefield was littered with hundreds of destroyed German tanks. In fact, the fighting continued around Prochorovka for several more days.

Das Reich continued to push very slowly eastward in the area south of the town until 16 July. This allowed the III Panzer Corps to link up with the SS division on 14 July and encircle several Soviet rifle divisions south of Prochorovka. Totenkopf eventually reached the Kartaschevka­Prochorovka road and the division took several tactically important hills on the north edge of its perimeter as well.

There are many complex and varying accounts by historians. Personally, I am somewhat skeptical that we will ever know the whole truth, and the battle will remain the “stuff of legends.”  One thing, however, is very clear: the advance of the Fourth Panzer Army was slowed dramatically due to the Panzer Corps' failure to take Prochorovka on 12 July, regardless of both the number of tanks possessed by the Germans or Soviets and the misuse of German panzer reserves.

When Hitler abandoned Operation Citadel on 13 July, the Germans' last opportunity to influence events on a strategic level in the East was lost.