Desert for tanks: what seems like the perfect space for battle. You can maneuver as you like, change the direction of the strike, surprise the enemy and win... if only it were so easy. That's if the heat does not boil water in the radiator of your tank, the dust doesn't clog the engine, turning it into a piece of scrap metal, and the tankers does not die from thirst or heat stroke.

During the Second World War, North Africa became the largest desert theater of operations. The German commander E.  Rommel, who was supposed to help the Italians to stop the advance of the British army in early 1941, had a big part to play in that turn of events. The future Desert Fox arranged a series of such devastations for the Allies that the secondary theater of operations became a painful abscess for them, which was to be opened and disinfected at all costs. The Germans, for their part, could not help but support their ambitious military leader. There were plenty of tanks in Africa. And sometimes, they looked very unusual.

It's not easy to paint tanks in the desert. The ubiquitous sand peels off paint as if it's filing it off, and the fierce sun devours colours in a matter of weeks. Any colour becomes dull and faded. Add a layer of dust to this and you get the typical colour of any tank in North Africa. For example, the M4A1 Medium Tank in the photo below came off the assembly line painted in the standard American color Olive Drab - dirty olive. You can clearly see how the Sahara desert intervened in its appearance.

Interestingly, in contrast to the winter camouflage painting, which was almost never applied to tanks in the factory, there was a “factory” desert paint. In particular, the machines of the Rommel African Corps were painted in “sand” color RAL 1002. By 1942, Germany had developed two pigments for armored vehicles fighting in North Africa. The first, called RAL 7027, was grey but lighter than the standard Schwarzgrau RAL 7021 (grey-black) for that time. The second paint, light brown, was designated as RAL 8020. While most of the German combat vehicles painted in these colours did not reach Rommel, they often found themselves on the Soviet-German front, grinding the Wehrmacht tank divisions with appetite.

By 1943, all German armored vehicles “turned yellow”: the command of the German army adopted a new standard for the base colour of tanks - Dunkel Gelb (dirty yellow). For the desert, it fit perfectly, but by the time it was in mass distribution, the German troops in Rommel had already been defeated.

The British initially painted the tanks of their units in Africa and the Middle East in a dark earth colour. Against the background of yellow dunes, such vehicles were very striking. Tankers, who did not want to be an easy target for enemy artillery and tanks, changed the appearance of vehicles on their own. The color was called "desert yellow" and was lighter than the German counterpart. Although this statement is true only for freshly painted tanks. Both paints were not resistant to fading in the sun, and soon Rommel’s tanks and Allied fighting vehicles looked as if they were almost the same.

As the original camouflage material used by the British army, wet cement deserves special mention. It was randomly scattered on the armor of the tank, and then sprinkled with sand. It turned out pretty good camouflage texture. The only trouble was that the desert only seems like it was yellow, when in fact it is a much more colourful space. If the tank is not noticeable among the dunes, then it just does not shine on the grey-black rubble of the rocky section.

The USSR did not fight in the desert in 1941-1945, but paint for this kind of landscape also existed. The standard was adopted by the Research Institute of Armored Vehicles in August 1939. It included brown and light sand pigments and was intended for cars of the Central Asian military district. The Soviet Union did not manage to master this paint before the war.

The unpopular craft of desert camouflage

Camouflage patterns intended for the desert, as a rule, were built on shades of yellow. But there were exceptions. The British, for example, used a combination of sandy-yellow, dark-grey and blue stripes for some time. As with any camouflage that suffers from the presence of too even lines in the pattern, the effectiveness of this style was doubtful, and it was used only at an early stage of the African campaign.

The bands were eventually abandoned in favor of spots and stains. They were applied to the armor with thick brushes and brushes, so that the pattern was very large and contrasting. Sometimes the painters additionally outlined the contours of the khaki spots with black paint.

In general, the British didn't pay much attention to camouflage. It was said above that harsh desert conditions quickly nullified any kind of "art". Therefore, the vast majority of allied equipment in Africa was just sandy yellow. But if the tankers took up the brush, they worked to the best of their imagination and what was at hand. The soldiers of the 9th hussar regiment, for example, decided to apply dark green shapeless spots to the yellow base color.

The Germans also did not necessarily want to paint tanks with camouflage.

Both in Africa and on the Eastern Front, a two-colour camouflage scheme was used, consisting of brown shapeless spots on a dirty yellow background. The most active use of camouflage was tank units and units armed with Tigers and Panthers.

Given that camouflage as such in North Africa was equally unpopular among both Germans and allies, and the base colors were very similar, in the documents you can find complaints that war machines of the warring parties cannot be distinguished from a distance just based on their colours.

In the desert, like nowhere else, a man is attached to his fighting vehicle, and it should be as autonomous as possible. You need to bring as much fuel and ammunition, water, as well as dust covers, tents, camouflage nets and much more. Entrusting this with trucks meant taking risks. It’s much easier for a vehicle to sit tight in the sand! 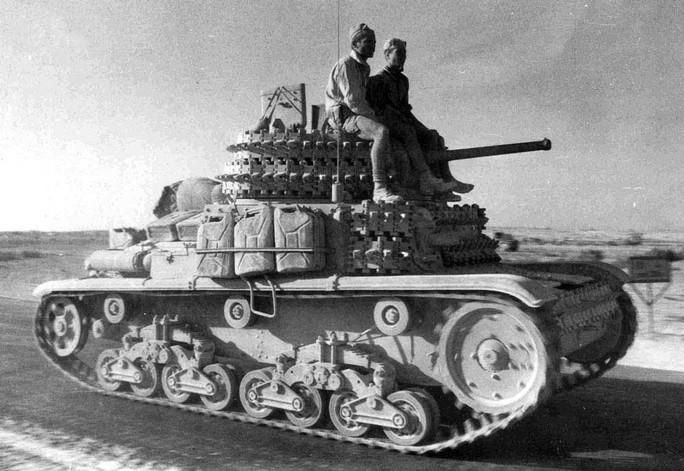 The crew removed their property from the tank just before the battle. The rest of the time, the tracks milled the sand among the dunes.