Battle of El Alamein: The Turning Point of the North Africa Campaign

75 years ago, German general Erwin Rommel and the Afrika Korps fought in the battle of El Alamein, which marked the beginning of a period of misfortune. From then on, the Germans no longer experienced complete and rapid victory against the Allies in North Africa. Let us now take a look into this battle!

Early 1942, Panzerarmee Afrika withdrew from Cyrenaica in North African Winter Campaign, withdrawing to Gazala where the Germans could stop to recover from the losses suffered in previous battles. At Gazala, the Germans defeated a British counterattack by the Eighth Army, inflicting severe losses on them at little cost to themselves.

Compared to 1941, the logistics situation had improved greatly. The Port of Benghazi was now fully operational, so supply lines were greatly shortened. Continuous air raids on British positions in Malta by Luftflotte 2 of the Luftwaffe kept the sea lanes clear. Rommel was able to stockpile resources that he needed for a summer offensive. At the time, there were 2 Panzer strike forces in Panzerarmee Afrika -- the 15th Panzer Division and 21st Panzer Division. With years of experience under their belts, they were veterans of desert warfare. 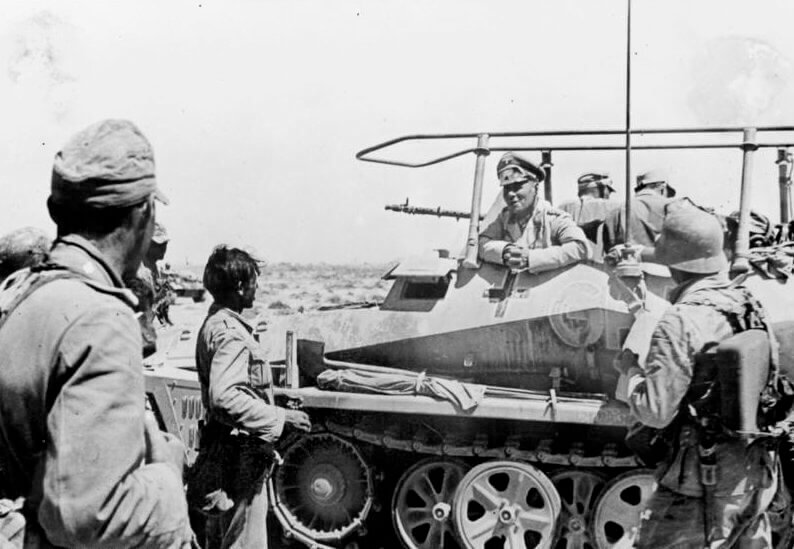 Rommel was at the peak of his career during the Battle of Gazala on June 1942. The Deutsches Afrika Korps defeated the British Eighth Army using fast-moving armoured attacks, captured Tobruk (a key target the Germans had eyed and besieged for a long time) and forced the British to retreat to the Egypt-Libya border. This picture shows Rommel instructing a combat unit during the battle from his command truck named “Greif”, made from a modified from Sd.Kfz.250.(BA)

On 26th May 1942, Panzerarmee Afrika attacked the Eighth Army’s strongholds along Gazala. The 15th and 21st Panzer Divisions, together with the 90th Light Infantry Division and the Italian 132nd Divisione Corazzata (Armoured Division) Ariete, flanked the British defensive line from the south of Bir Hakeim. Together, they pushed deep into the rear of the British line and defeated the British in a tank battle in Knightsbridge Box. The British defensive line collapsed and the Eighth Army sustained heavy losses, forcing them to retreat in chaos. The Axis forces seized this opportunity to occupy Tobruk, and so the city which the Axis had besieged for over a year was now in German hands. The loss of Tobruk shocked the whole of Britain. 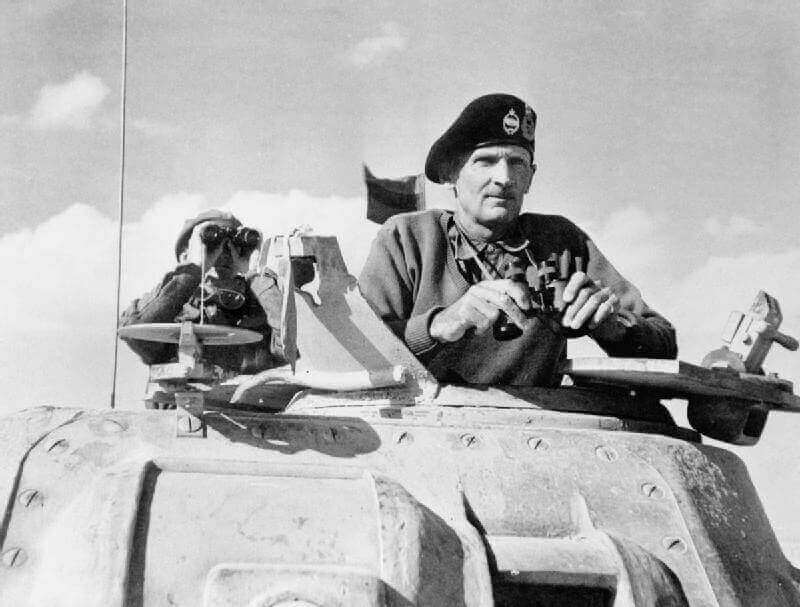 Commanding officer of the British forces in El Alamein, Field Marshal Montgomery. He accurately identified British advantages and the German disadvantages. He also emphasised tactics that favoured British strengths against those of the Afrika Korps (which was good at rapid and mobile attacks). Eventually, under his command, the British defeated the Axis forces in the Second Battle of El Alamein. (IWM)

Rommel and his Panzer Divisions then sped towards the Egypt border, chasing the Eighth Army as they retreated to El Alamein in Egypt. El Alamein was the last position between them and Alexandria. If Panzerarmee Afrika took control of El Alamein, the Germans could control Egypt's ports and cities and occupy the vital Suez Canal, which would extend and threaten British supply lines to the Far East, then the position for the British in the Middle East would also be seriously shattered.

However, the following attacks by the Axis forces could not overrun the British at El Alamein. The Middle East Commander, Sir Claude Auchinleck, always found weaknesses in the German lines and counterattacked where they were weakest. As such, the Germans could not defeat the British. This series of battles became known as the first battle of El Alamein.

Although Auchinleck established a foothold in El Alamein, Churchill still replaced the commanders in the Middle East to raise the morale of the British troops and to start afresh. Field Marshal Bernard Law Montgomery took over as commanding officer of the Eighth Army, and Gen. Harold Alexander took over Middle East Command. As new commanders arrived, Churchill sent more supplies to North Africa in support of the British troops stationed there. In Churchill's eyes, it was a critical moment for Great Britain. 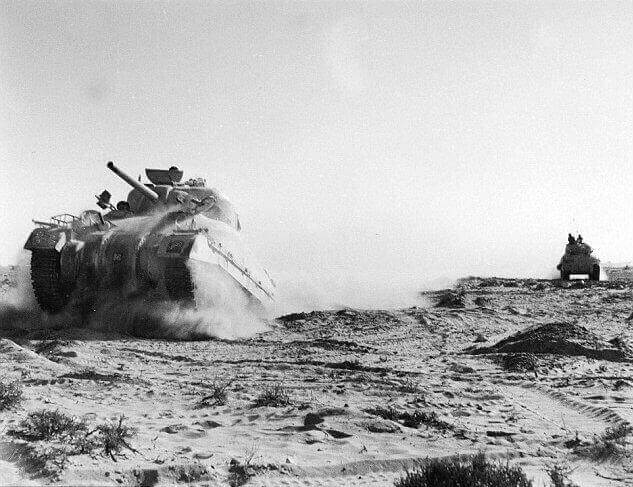 The British deployed M4 Sherman medium tanks from the United States of America in the Second Battle of El Alamein. The M4 Sherman performed comparably with Panzer IVs operated by the Germans. They served to bridge the technological gap between German and British tanks; British tanks had been inferior to German ones for a long time. This picture shows an M4A1 belonging to the Eighth Army. (IWM)

Due to the restrictive terrain, Rommel sent his panzer forces to the south, flanking the British from behind. This forced the British armoured units to engage the German on unfavourable terms; they had to fight on a battlefield that the Germans had chosen. There, the Germans defeated British armour. However, they failed to detect the mine field deployed by the British. The 15th and 21st Panzer Divisions drove into it unexpectedly, and then they realised that they were caught within the small space between the minefield and the British stronghold.

They had not only lost the element of surprise, but had also lost their mobility. Rommel insisted on attacking, and his units eventually ran into a strong defensive line at Alam el Halfa. It was there that they lost a large number of tanks. The British 7th Armoured Division then counterattacked from the Germans' rear, forcing them to retreat before the British cut them off from the south. This was Rommel’s unsuccessful Battle of Alam el Halfa.

As the Battle of Alam el Halfa was taking place, logistical issues started to plague the Axis forces again. Because they had been pursuing the British army across the desert, they had postponed the of capturing Malta. As such, the British were able to reinforce Malta, and the Royal Navy dominated the Mediterranean Sea, sinking many Axis oilers bound for North Africa.

As a result, the Panzer units on the front lines severely lacked fuel, and panzers were not useful if they had no fuel. In sharp contrast to the Axis supply situation, the British received supplies continually. They received both elite troops and America’s latest tanks. These were the main battle tanks used by the American in WW2: the M4 Sherman. The M4 Sherman was the next-generation main battle tank developed by US Army based on observations of intense armoured battles in Europe and the experience of Allied armoured vehicle against German Panzers. The M4 was reliable, easy to maintain and operate, and came with a good 75 mm M3 L/40 main gun and 76mm thick frontal armor. It performed comparably with the German Panzer IV and its 75mm KwK 40 L/43 main gun. The Sherman tanks that the British received were the M4A1, modified for desert operations. 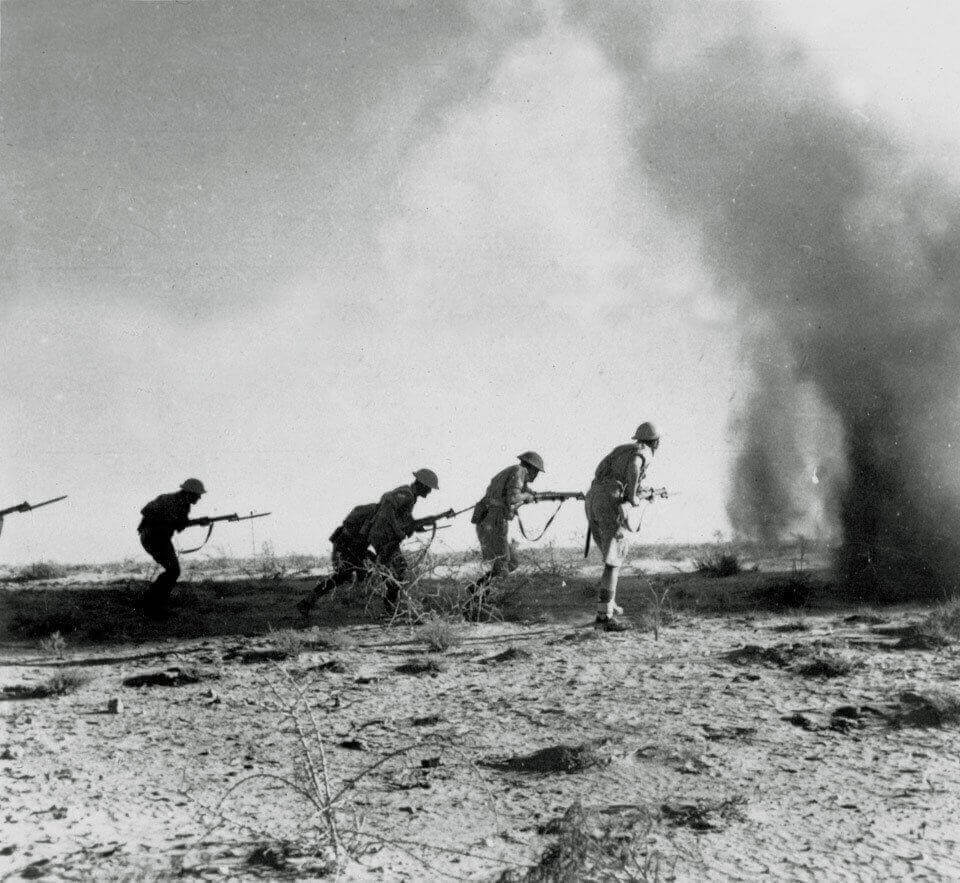 Montgomery faced the Germans, who were good at mobile warfare, by fighting a war of attrition and taking advantage of his plentiful supplies. The British took advantage of everything they could, from tanks to artillery to infantry. This picture shows the British infantry conducting a tactical manoeuvre in the desert before an attack. (IWM)

To achieve this goal, Montgomery delayed the timing of engagements as much as he could, so that he could stock supplies and equipment to outnumber the Germans. By late October, Montgomery decided to deliver the final blow to Axis forces in the North Africa under the pressure from Churchill. This came to be known as Operation Lightfoot. The British outnumbered the Axis fores in terms of troops, artillery, and tanks. The British, with 1,029 tanks, would engage the Axis, which altogether had 547 tanks; some of them were Italian tanks with poor performance in combat. The Axis forces also had few operational tanks due to a lack of fuel supplies. As such, the Germans had to fight in highly unfavourable conditions. 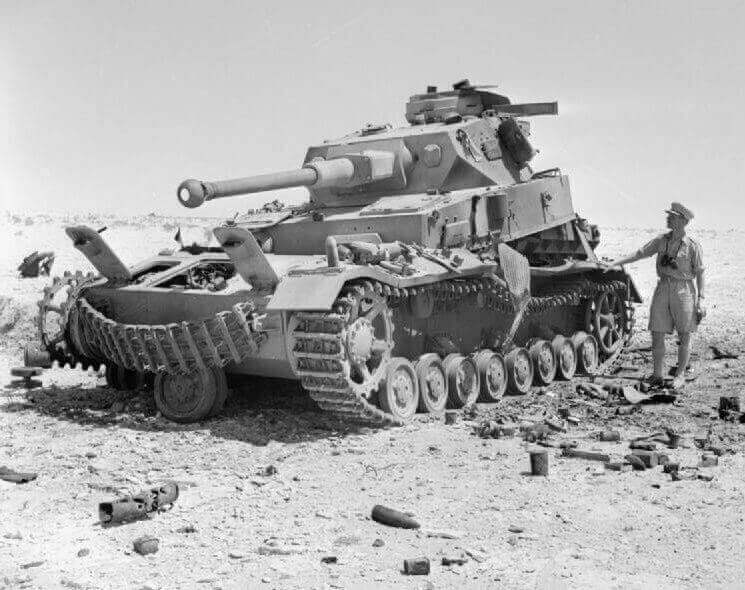 A German Panzer IV F2 destroyed during the battle. From mid-1942, in order to upgrade the Panzer IV and use it as a main battle tank, the Panzer IV F2 and G will equip with 75mm KwK 40 L/43 main gun. This makes Panzer IV can compare with the latest main tanks of Allied forces.(IWM)

On 23rd October 1942, at 2300 hours, the British engaged the Germans in combat. The engagement began with a massive bombardment using more than 1,000 artillery pieces. At this moment Rommel was Berlin, and although he returned to North Africa next day, the Desert Fox could not overturn the situation. Under the war of attrition Montgomery had set in motion, Panzerarmee Afrika ended up in a critical situation. Although the British sustained heavy losses in terms of tanks – 300 tanks were lost in the initial attack – the British could afford to sustain such losses, but the Germans could not. On 2nd November, Montgomery began Operation Supercharge, putting more pressure on the Germans. Montgomery had control of the engagement, and he was determined to not give the German any chance to use their advantages in mobile armoured warfare. Under this war of attrition, the British broke through the Axis defensive lines, quickly worsening the situation for the Axis forces. They would be eliminated in battle if they did not fall back.

Rommel suggested to Hitler that his army should retreat, but the answer given was "Zum Siege oder zum Tod" – Victory or Death. The Axis forces could not sustain a war of attrition. On 4th November, Rommel disobeyed Hitler’s order of no retreat, ordering his troops to disengage from the fighting at El Alamein, retreating to the Egypt-Libya border.

The turning point of the North Africa in WW2 had come. Montgomery’s Eighth Army declared that they had won the Second Battle of El Alamein. On 5th November, the British captured a great number of the Axis troops.

Rommel would never return to North Africa. The Germans left North Africa via Tunisia in May 1943. The legend of Deutsches Afrika Korps ended here.

Text and photos are provided by Alte Kamerade Publishing Studio.