Starting on 10 September, the War Games in the Stronghold mode will be held weekly on Sundays [Updated].

All clans that participate in Stronghold mode automatically become participants of the War Games leaderboard. The best clans on the leaderboard will earn Tier XI and XII reserves, and players who participated in battles will be rewarded with gold.

Schedule of the War Games

A day of the War Games is divided into two stages:

Disciplines of the War Games 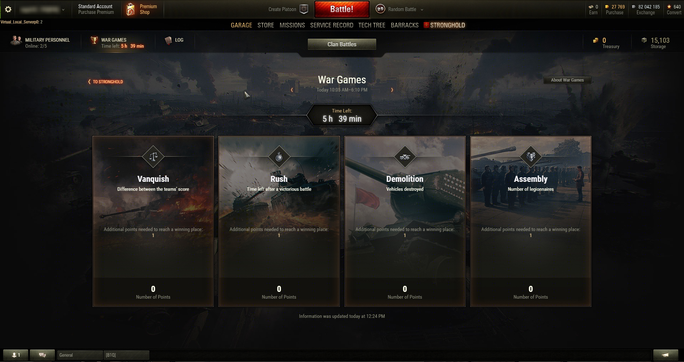 Thus, a clan will receive points in four leaderboards at the same time for each victory in the Stronghold mode.

The number of points will depend on the battle mode. In Advance of Tier X, the coefficient will be higher than in Skirmishes. See more details in the corresponding section of the Guide. 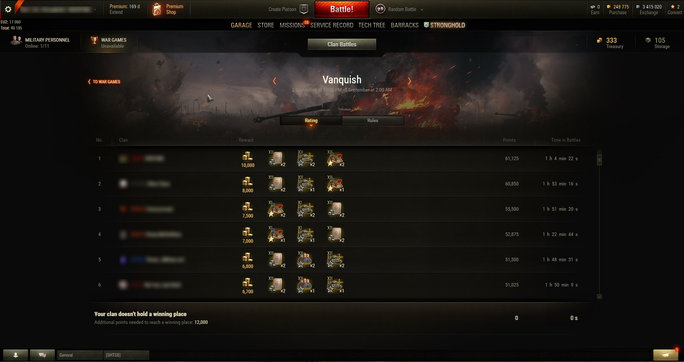 The War Games leaderboards are built three times per day; once the competition is over, the winners of each leaderboard receive the reward.

The leaderboards are independent. If the same clan takes the top position in different categories, it will receive rewards for each of them.

There are individual prize pools for each stage within a day.

The rewards include: clan reserves of Tiers XI and XII, as well as gold. The prize pool and the number of prize-winning places of particular completions are displayed in the Stronghold interface.

The clan reserves are added to the winner clan. Gold is distributed among the players who participated in the Stronghold mode depending on personal contribution of each player. If legionnaires played for the winner clan, they also receive gold similarly to the clan members.