Update 9.4: Changes in the Ramming Mechanics

The most experienced of you know the benefits of this manoeuvre of opportunity already. If you’re new to World of Tanks, let’s shed some light on the term for you: Tank ramming is a tank battle tactical manoeuvre aimed to destroy enemy's armoured vehicles by collision.

The history of armored combat holds many described cases of the usage of this dangerous tactical move. The battle near Seseña settlement, not far from Madrid, is considered to be the first documented use of a tank ramming: During its course, the crew of a T-26 tank under the command of Lieutenant K. Osadchii destroyed a tankette of phalangists by crashing into it. Later, ramming became a rather often occurrence on the battlefield. Be that as it may, tank ramming was a very risky move, almost equally dangerous both for an enemy tank and for the initiator of the collision. Therefore, ramming was conducted only as a last resort, when there were no other options available.

In the World of Tanks reality, ramming is much more common than in real life. The guaranteed damage which is inflicted to the opponent in a collision is often used as a powerful argument in a duel of two tanks. There are also funny situations, like for example when inexperienced players smash into heavier and better armoured opponents in the pursuit of frags, drawn by the opponent’s low HP pool. However, what they do not expect is the fact that due to lighter weight and smaller frame, it is them who are in a disadvantage there. As a result, their quest for glory, frags and medals is ended abruptly with an embarrassing self-destruction. Therefore, always take into account the mass and the armour of a tank that you are going to ram – if you want to come out of it on top, you should be the one with higher values in these fields.

"The battle ram is the weapon of heroes!"

Many players have heard this popular expression, but not all of them fully understand the mechanics of ramming in World of Tanks. This article will describe the mechanism behind the damage calculation in the collision of two tanks, and describe the changes that will occur in update 9.4. 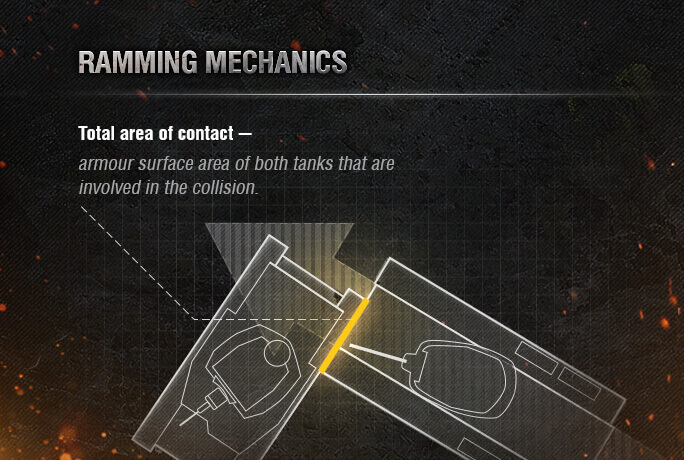 1) When two tanks collide, their interaction area - "the total area of contact" - of the armour of both machines is determined;

3) After having determined "the total surface of contact "and "the point of damage application" calculations are made by the server, which determine the damage inflicted to each tank involved in the collision. When calculating the amount of the inflicted damage, the following parameters are used: 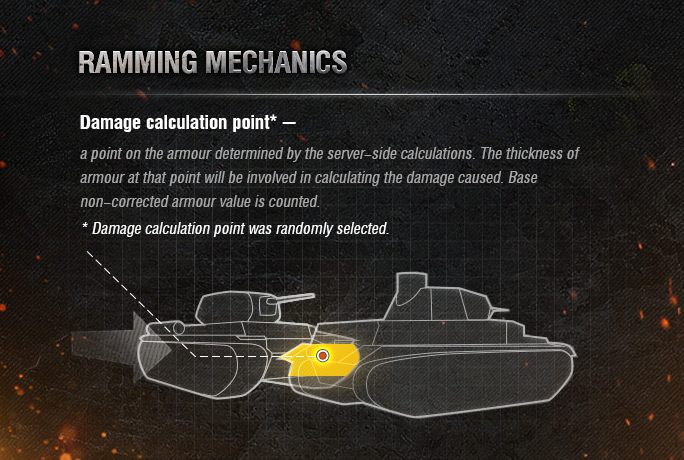 After the release of update 9.4, there will be some changes in the ramming mechanics in the game. In order to make it more realistic, the dependency of the damage on the armour thickness in the collision area will be increased significantly. Thus, by striking vulnerable places of the enemy machine with the tank’s armoured front, you will cause more damage than with a head-on crash. In addition, when ramming into the opponent with the thickly armoured front of the vehicle, the damage done to the initiator of the collision will be reduced.

Master the art of ramming and inflict additional damage, Commanders!