We stand by the promise of boosting game diversity with new maps, fixing imbalances on removed arenas and addressing top community concerns about maps that are being redesigned in HD. You’ve been eager for more information on these, and over the next few weeks we’ll be offering you an inside look at new battlefields and level design improvements to existing maps.

Today’s article details changes to Fisherman’s Bay, Ruinberg, and Pilsen. Gameplay on these raised a few eyebrows over time, and we used the HD redesign as an opportunity to improve your experience. Before we get into details, please note that it’s still work in progress and more changes might follow after testing.

Teams spawning in the south had a rough time working the left flank, since most cover spots on their way (and there weren’t many) were of little use, unless you had good gun depression. At the same time, the team in the north had far better chances at breaking open the flank (red, 1) and setting up a strong defense there, which foreshadowed an eminent loss for the southern team. 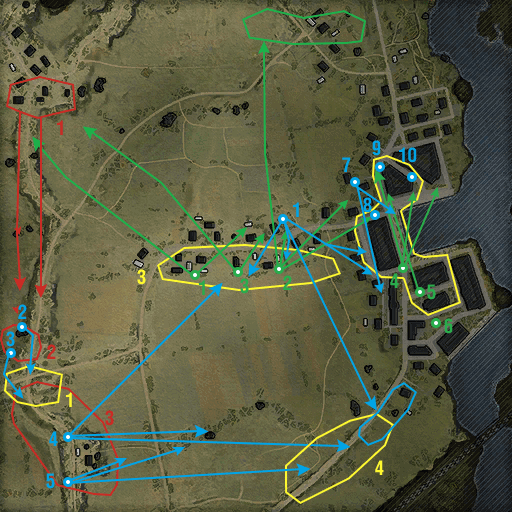 After the northern heavies and mediums had pushed the flank (red, 1), their light tanks advanced further south (red, 2), while their punchier allies stifled southern vehicles’ attempts to move up to the center of the west flank and counterattack. Eventually, the southern team would gather near the crossroads (yellow, 1) and camp there. The first-line attackers from the northern team (red, 2) continued the push, supported by TDs from the second line (red, 1). As soon as they owned the southwest, they would systemically destroy enemies positioned in the central area (yellow, 3) and along the road on the east flank (yellow, 4).The push often continued till the northern team occupied a greater area and closed in on the enemy.

Technically, the town to the east could give a decent platform for attack to the southern team. They rarely managed to make it there though after losing the west flank. However, if they succeeded, the northern team were left with no other options except for passive defense (blue, 7–9).

The map received a more balanced frontline and offers both teams equal chances at pushing key directions. Now, the valley to the west has more cover, giving both teams equal chances at taking over the flank. The team that starts in the north still can win over strategic areas closer to the center of the flank (red, 1 and 2). But they can be stopped now. The southern team can leverage defensive positions in the lower left edge of the map to stifle enemy attacks (yellow, 1 and 2). 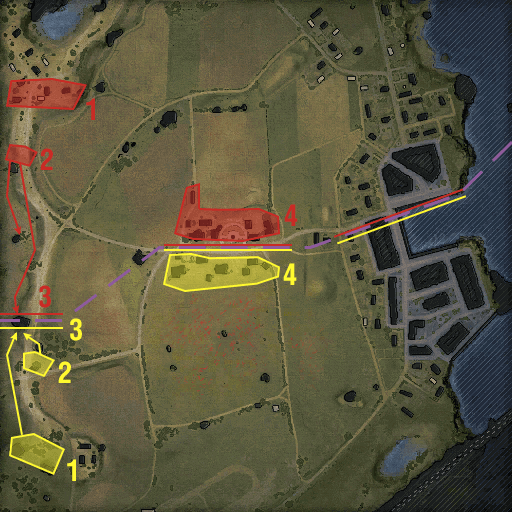 Regardless of the side you’re on, you no longer need to camp in safe zones waiting for an enemy to misstep. Use the mill (yellow, 3) to support allies as they advance into the enemy territory.

Both teams used to have a tough time in the central area, although the southern team had it a little easier thanks to several favourable spots (green, 1–3). The northern team had just one good spot in the center (blue, 1), which wasn’t enough for an active push and left them exposed to enemy artillery. Now, the area is more open and offers many opportunities for scouts from both camps. 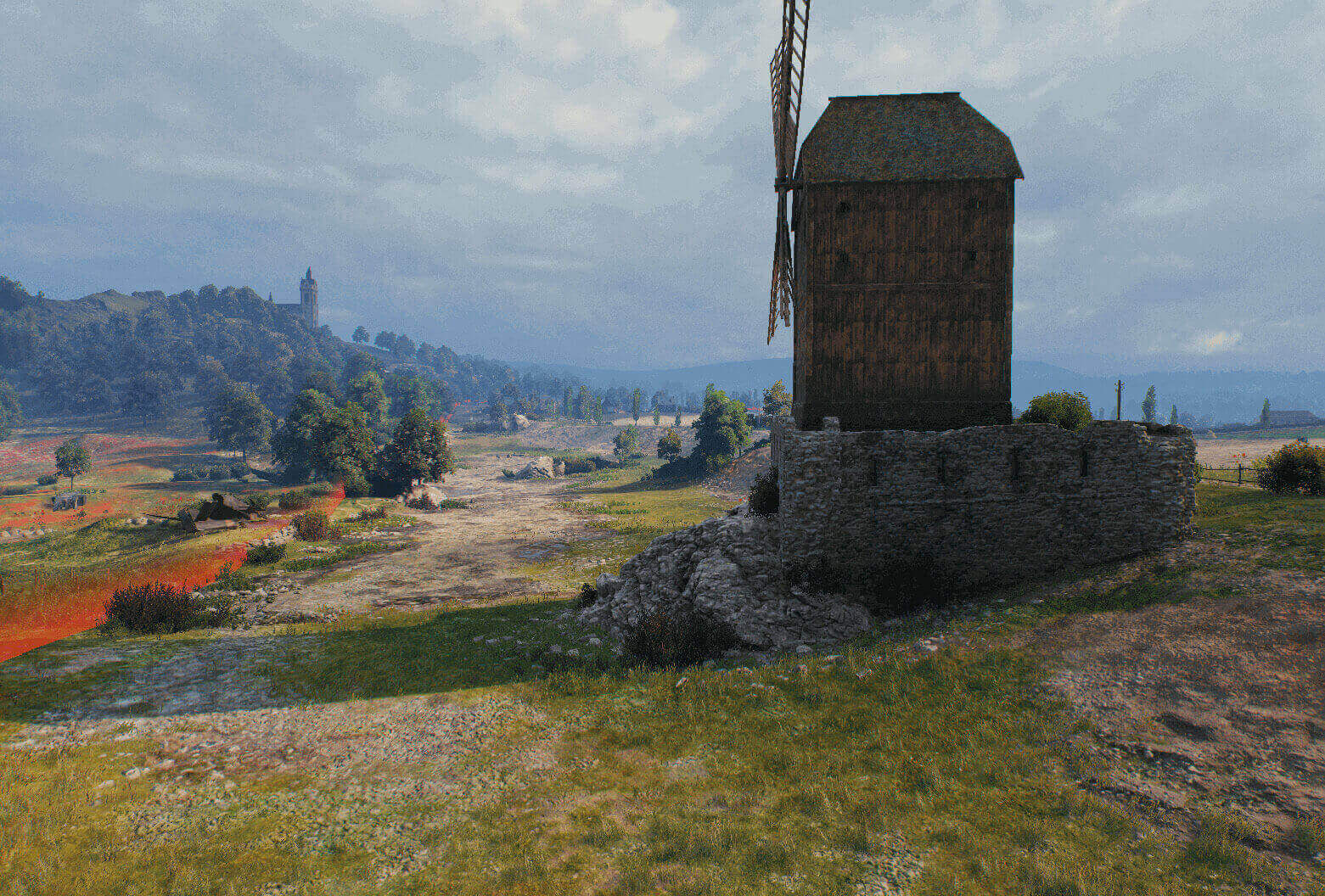 Cover positions were redesigned to minimise the impact of gun depression, which made them useful for a wider range of vehicles. Finally, we moved a few bushes and trees, making it easier to detect firing routes, find cover and favorable shooting spots.

In addition to visual enhancements, we tried to fix imbalances that made the battle easier for the team that starts off in the northern section of the map. 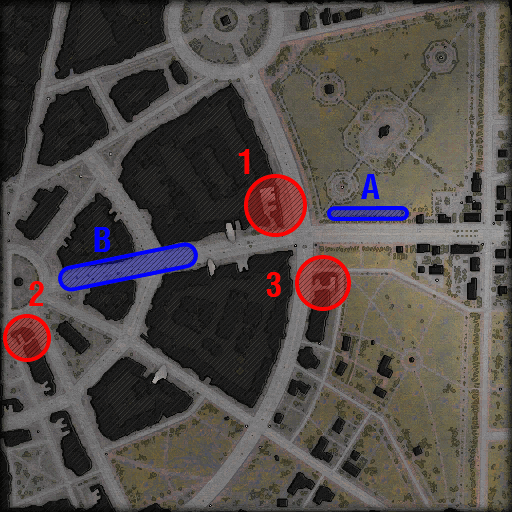 The team spawning in the north had a big advantage in urban combat, since they could set up in firing spots along the central road (A). This lowland provided them with solid cover (dense bushes and lower ground). So they could wear down enemies entering the city from the southeast, organise a push to the city and/or support allies fighting in the city—all with minimum chances of being spotted from the city. As a result, the northern team would often take control of the central or upper city, grip the southern team in a vice, and win.

To level out chances at victory, we added a new position at the eastern edge of the city (north of the central road). It’s mostly useless to the team in the north. On the contrary, taking control of it can become a game-charger for tankers who spawn in the south. They can prevent the scenario we just described by taking out enemies positioned in area “A” and those scattered across the field. 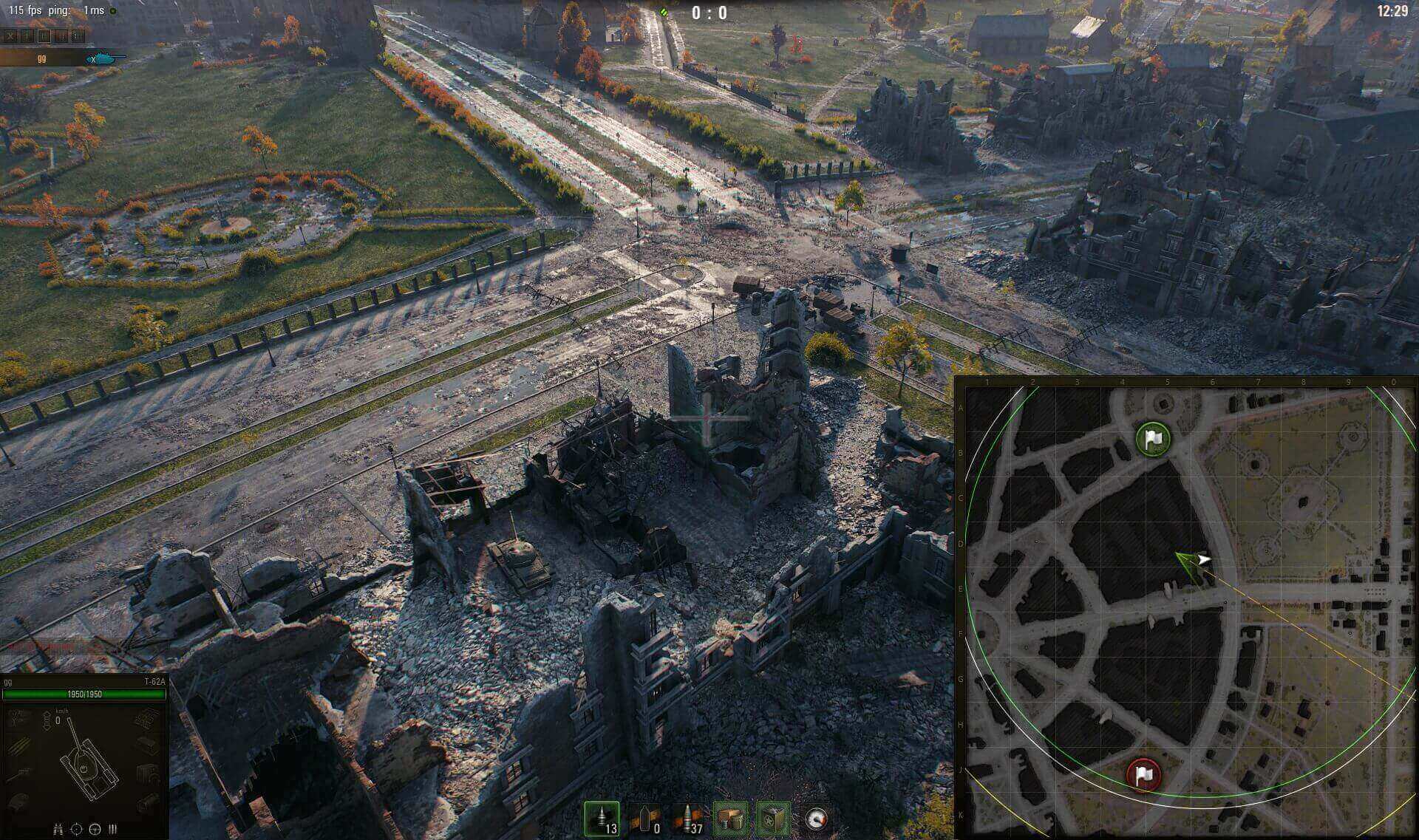 To further strengthen the south team, we also rebalanced the location at “2." Now, you can shoot at tanks advancing from area “B” here. 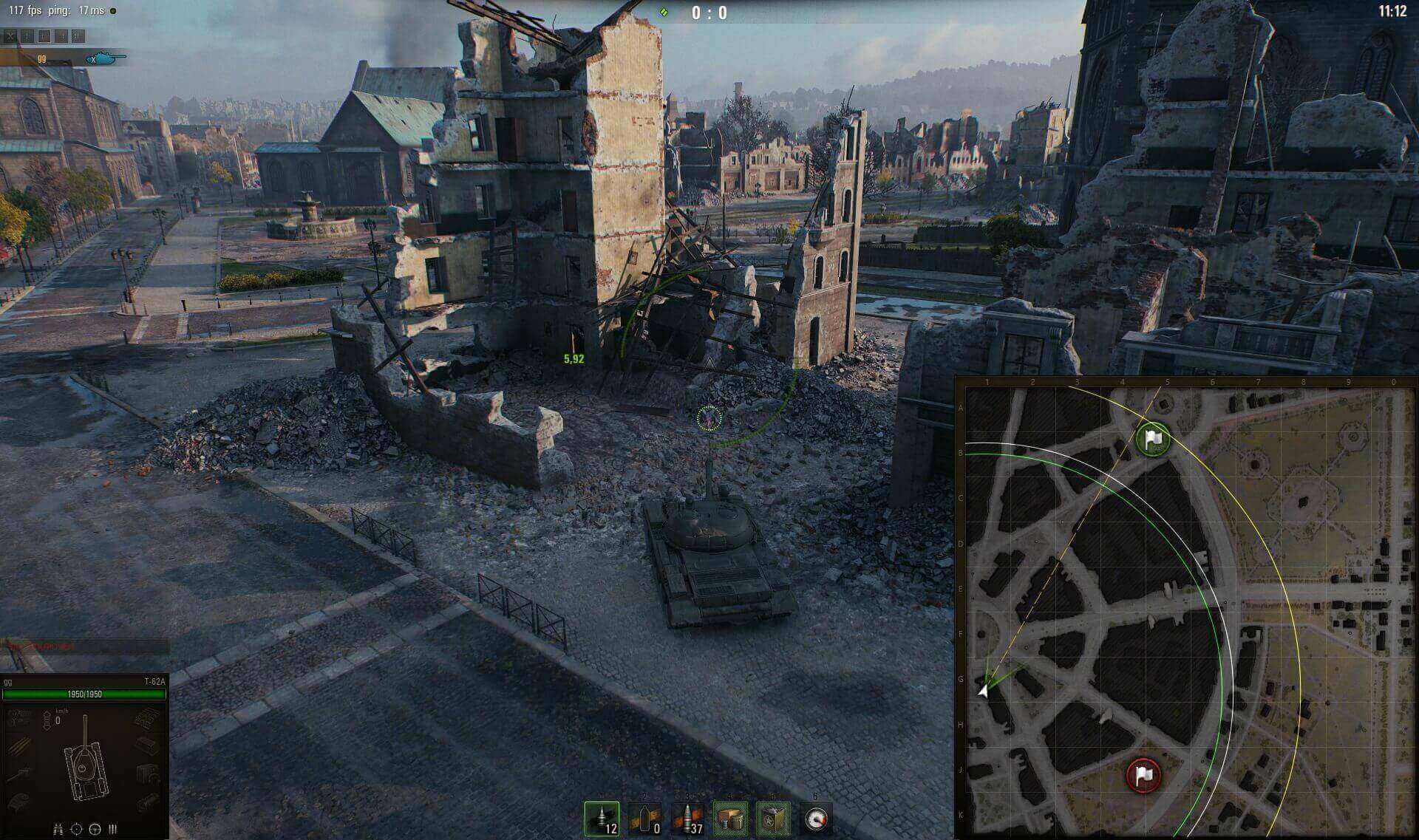 Pilsen
NOTE: The redesign of Pilsen is scheduled for beyond the release of Update 1.0. We will release more information as it becomes available.

Pilsen felt too small and gave little in terms of gameplay to turretless TDs and thinly armoured vehicles. Medium tanks kept away from the center of the east flank since it offered no cover from arty shells. The west flank had way too many shoot-through zones, which prevented both teams from pushing/defending certain directions and turned battles into a fine frenzy. Once you entered this area, you were effectively stuck there with no way to retreat or advance. Finally, the central area promoted camping since the impassable big hangar there was a death trap for anyone reckless enough to move past it.

Addressing your feedback, we enlarged the map to 1x1km, added cover spots and increased the distance between hangars on the left flank, removed some of the buildings in no-man's land in the center, and completely redesigned the eastern (right) flank.

These changes should foster a more versatile experience, while also making the map friendly for all vehicle classes. 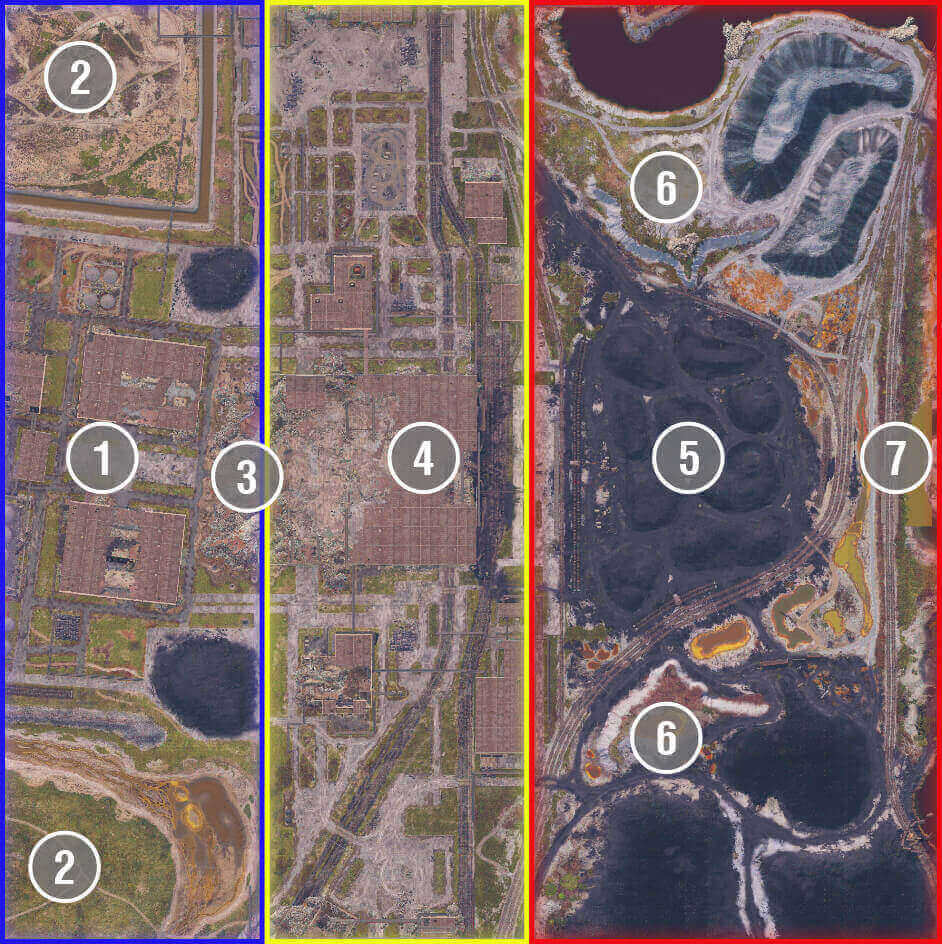 West flank: The industrial area to the west remains a great spot for heavies and well-armoured medium vehicles to push initially.

Central area: Core gameplay stays the same and boils down to positional fire through the gates and holes in big hangar walls. Here’s what changed:

East flank: The right flank’s been through a complete makeover. Now, it’s less about brute force and more about mobile lights and mediums working together among coals hills (5). Scouts can poke over hillsides to detect enemies lying in cover nearby and in TD spots (6). Mediums should keep behind scouts and fire on anything that’s been spotted. TDs are tasked with hunting down lights and mediums between hills and taking down enemy TDs that were careless enough to expose themselves.

The far-right edge of the map now features a long, straight alley with dense shrubs and hardly any other cover. Circumventing the enemy would take you a few steps closer to winning the battle. Make sure you’ve got support in the hills before you head there, though. You’ll need them to distract enemy TDs after you spot them. Then, move ahead to destroy enemy arty that’s likely to hide there. Stay alert: without any hard cover you should expect SPG fire if you are spotted and staying still.

Let us know what you think on these redesigns and stick around for more news! Next up we’ll be talking about Erlenberg, Kharkov, and Steppes. The third article in the series will go over Province and other maps that were removed from rotation because of imbalances. Right now, we’re working out a way to fix common issues and bring them back.