SPGs have been a thorn in the community’s side for a while now, whether you drive them (think of poor accuracy and frustratingly long reload times), or are sent right back to the Garage by a shot that came from out of nowhere. However, regardless of how mind-numbing and discouraging it can be at times, artillery belongs in the game. It just needs a thorough revision to help claim its rightful place on the team and on the battlefield... and it’s getting that in Update 9.18.

The update introduces a set of changes to SPG combat parameters and mechanics, all designed to make them more team-oriented, exciting and rewarding to play, and far less frustrating to play against. Instead of dealing massive damage, forcing draws and base camping, arty now work in close cooperation with the rest of the team, softening targets and helping set the attack direction from afar. The penalty for being hit decreased and won’t send you back to the Garage. So, heavy tanks are less afraid to push out and lead an assault, which should facilitate a more action-packed, fluid and fun experience for all classes.

We touched upon the changes that turn arty into long-range support fire vehicles in the Common Test announcement. Today, we break them down in more detail, while also talking about arty’s economic and individual battle missions.

Limiting the Number of SPGs

Starting with 9.18, each team has at most three SPGs, and they won't be able to team up in Platoons. Limiting the number of SPGs per side should stop arty-dominated battles, allowing just enough of them in to effectively support the team without scaring the other side into staying put to avoid being hunted down.

Removing the option to play in Platoons as SPGs should facilitate team cooperation and aid the matchmaker in creating balanced teams. You were vocal about mismatched scenarios where a Platoon of three SPGs is placed at the top of the list and the team ends up with three long-range support fire vehicles as their main strength. The other frustrating issue was frequent cases of arty giving its all to support fellow Platoon members and totally neglecting the rest of the team. To eliminate both problems, we decided to stop SPGs from forming and joining Dynamic and regular Platoons.

Large-calibre guns, coupled with the high penetration values of AP and HEAT shells, allowed SPGs to pierce thick armour, usually dealing fatal damage. This scenario forced draws and base camping; no one wants to be in a game where they barely get to play. Players would rather sit in an arty safe spot and never move than be destroyed with full health.

At the same time, the chances of landing a nice shot with arty’s notorious accuracy, long reload time, and bad dispersion used to be rather low. You chose a prospective direction, waited for the enemy to show up, aimed at a moving target—and missed in most cases. Then you had to wait for another opportunity to shoot. If the story repeated, it made you seriously consider never playing arty again.

When revising arty parameters, we tried to fix both issues:

The all-new stun mechanic is instrumental in reshaping arty into efficient team players. Now, tanks in the arty burst radius (we are talking about 122mm or larger-caliber HE shells) have their characteristics temporarily weakened. It means that SPGs can help turn the tide of battle by supporting the assault from afar. And they can provide their team with a few precious seconds to break defensive lines and catch the enemy by surprise. As for the other camp, arty won’t kick you out from the game in a single shot the way it did. Now the shell burst causes a shell shock to your tank’s Crew, which worsens a vehicle’s mobility, accuracy, and reload time for a brief period. When the stun duration passes, you can fight on.

If you look up HE shell characteristics, they now include a maximum and minimum stun duration. The actual stun duration consists of two variables, one permanent and one dynamic, and can’t be less than five seconds. The minimum stun duration shows the guaranteed time you’ll spend stunned should you find yourself in the shell burst radius. Plus, you are getting a certain amount of the remaining stun time that depends on the area within the burst radius, the amount of damage you receive from splash, equipment and consumables you mount.

The remaining stun time is the difference between the maximum and minimum parameters.

Along with a vehicle’s armour, which partially helps absorb the damage and thus lower the stun duration, the negative impact of arty can be minimized further with Spall Liners and Large First Aid Kits:

If a vehicle gets stunned by several HE shells, the stun time is calculated separately for each shell. The countdown begins after the first shell hits it. And should two stun effects overlap, one is partially or fully negated by the other. 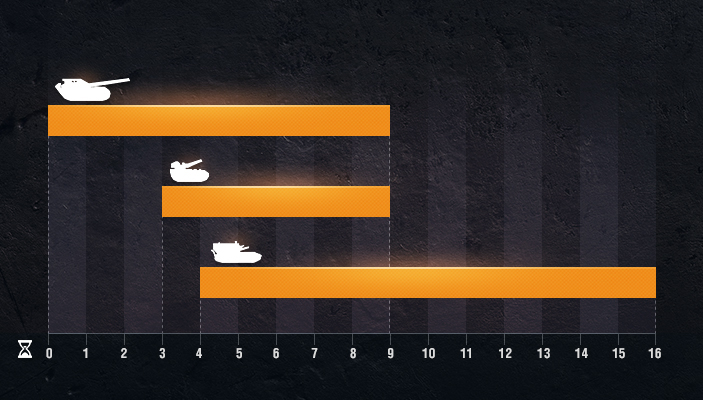 When your Crew is struck by an HE shell blast, they all suffer from shell shock, reducing a vehicle’s effectiveness. The stun effect, just like its duration, consists of two variables: you are guaranteed to get 75% out of the maximum decrease in parameters (you can see them listed below), plus a certain amount of the remaining 25% (this one depends directly on the damage you receive). If you are stunned with several shells, only one of them affects a vehicle’s parameters: the one with the larger decreasing coefficient.

Starting in Update 9.18 you can use as many Repair Kits, Fire Extinguishers, and First Aid Kits per battle as you require to keep the fun going. Let’s say you used the Repair Kit in the first few minutes of the battle. Then you were unlucky enough to take damage to your ammo rack right after that and used the First Aid Kit, only to take another hit to the gun. In the past, this would handicap you for the rest of a match. Now, you just need to find a safe spot and wait 90 seconds for the Repair Kit’s cooldown to end. You can then restore the damaged module and fight on with 100% effectiveness.

Multi-use consumables won’t make your spendings skyrocket. No matter how many times you activate any of the three in battle, when it ends, you’ll only have to pay its regular cost. Whether you used the Repair Kit just once or ten times, it’ll cost you 3,000 Credits. And they replenish automatically during the battle. Just keep in mind that once you use it, you’ll have to wait 90 second to get a new one.

To cement arty’s new role and make it a rewarding class to play, we slightly revised their economy. Now they earn XP and Credits for the damage their teammates cause to stunned targets. You can look it up in the Battle Results Screen and in your profile (the Achievement section), where it’s listed as damage caused with your assistance.

The total amount of assisted damage, which is basically all damage dealt to stunned vehicles, gets split between all SPGs whose HE burst covered these vehicles, stunning them while they took damage from someone else. The first SPG to stun enemies receives 70% of this total amount. The remaining 30% is evenly split between all other SPG whose stun duration is counting down while this damage is deal.

If an SPG stuns an enemy that's already been stunned by someone else, this SPG earns a portion of the 30% until the first stun has worn off. As soon as it has, the second receives 70% of the total amount of damage dealt while its stun duration is counting down, etc.

If just one SPG stunned vehicles that were damaged, the player in this SPG gets all the assisted damage.

Finally, the damage arty causes to the tank it also stuns isn’t included into the assisted damage.

To help a team succeed, SPGs need to be in sync with other players and coordinate their actions accordingly, so we introduced several UI elements to make this easier:

The changes in firing parameters along with the increase in HE shell burst radius and the stun effect should force SPGs to change their play style. They’ll aim to hit multiple targets, letting their teammates finish the job. Now, arty can be a linchpin in paving the team’s road to victory, if they play their cards right. So, watch carefully as the battle unfolds and analyze the situation. Should the opposing team attempt an offensive, stifle it by stunning the enemy. Should your team attack, clear the way for them by stunning the enemy.

If you aren’t playing in arty, pay attention to the minimap, too. If a friendly SPG signals you where it’s going to fire, help it stun as many enemy tanks as possible by luring them into the target area—but make sure you escape before a HE shell hits.

Following massive changes to arty, we also updated their individual battle missions. Check out the list below and embark on the mission to earn rewards!

This huge SPG makeover took a while to implement. As this isn’t our first attempt to fix arty, we started small this time to make sure we got it right. After a few internal discussions and tests, we brought the set of changes (the new stun mechanic amongst them) to arty in Sandbox, where many of you helped us fine-tune them. The test showed that the SPG revision facilitates teamwork and makes matches more fluid and fairer, and revised arty made its way to the Common Test. But the work is far from over. We’ll continue to polish it up to release and beyond, and we are asking for your help here. Now that all of you can see for yourself how SPGs play now, we want you to join the test and share your feedback on the forum.