To commemorate Wargaming ANZ's second anniversary of servicing the local community, we wanted to highlight local players who have gone above and beyond - either for the World of Tanks community or the real-life defense force. With that in mind, there isn't a more fitting individual to start with than Bolagnaise, who we all know as one of YETI/Team Efficiency's most dangerous players, but who we might not know as a four-tour veteran of East Timor, Iraq and Afghanistan. 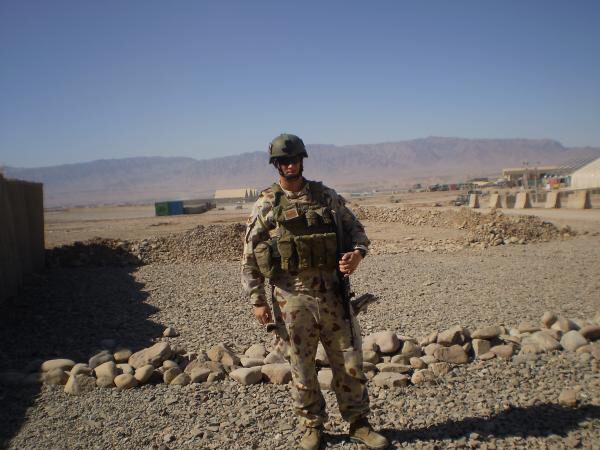 What inspired your choice to pursue a career in the military?

I have always been interested in the army from a young age; however, seeing 9/11 on TV as a teenager was the driving force for me. At that time, the Australian army was at such a high tempo following the events of 9/11, there wasn’t enough space at the standard training facility in Singleton. Because so many people were joining the infantry after witnessing the events of 9/11 five years beforehand, I was sent up to Brisbane where training courses was being outsourced to the regiments themselves.

There are three types of training when you join the army. You get basic training at Kappoka, where they teach you how to salute, march, and all the basic (non-combat) army-related stuff. From there you go to IET’s (Initial Employment Training). The third type of training you do before you deploy is called pre-deployment training. This prepares you to do your job overseas, allows you to earn qualifications on weapon systems and other things you will use on operations. Things like advanced medical training are also included in pre-deployment. We even did training on robotic humans that would bleed out; you had to save them from gunshot wounds and traumatic amputations.

What was your first deployment and what was that experience like? And how did that feel from a combat perspective?

My first deployment was to Timor Leste, less than a week after my pre-deployment training finished. It was a big culture shock going from Australia, a developed country, to a developing country, where people didn’t have the same standard of living we enjoy at home. Mud/tin houses, not much money, roads were not paved etc, but they somehow could always afford satellite cable and a large LCD TV!

The first time I had to do something related to my training was three days into my deployment. There was a gang in Dili (Timor’s capital city) shooting at civilians and inciting a riot, which was also threatening the facility where Australian helicopters were stationed. I was a part of the QRF (Quick Reaction Force), and we were informed that hundreds of people had broken down the fence and were standing around our Blackhawk helicopters. As soon as I arrived, I had to attend to a civilian who had been shot through the leg and was bleeding out. Despite calling the medic, he unfortunately passed away in front of me while I was just 10 days out of basic training.

The culture difference between Timor and the Middle East is very different; if nothing else, the threat level was significantly increased. Fighting a counter-insurgency vs a peacekeeping operation is an entirely different risk level. Unlike combatants in East Timor, the Taliban and Al Qaeda are willing to kill you to achieve their ends. The worst thing that was probably going to happen to you in East Timor was getting shot with a ‘shit dart’, which is basically a slingshot-propelled dart covered in faeces used with the aim of infecting the targeted. On my first trip to Afghanistan however, my rotation had 5 Australians killed from IEDs and 1 from small arms fire. We had one Victoria cross awarded from my company (Dan Keighran VC, Delta Company 6RAR) at the battle of Derapet, and multiple Medals of Gallantry awarded from our deployment. Needless to say, it was a different experience to Timor Leste.

Did you ever work with tanks or armoured vehicles?

Many times. Including M113 APCs, ASLAVs, Bushmaster PMV as well as both American and Australian Abrams tanks.

What's the difference between an Australian and American Abrams?

Australia only has the M1A1 AIM Abrams with the 120mm gun, whereas American Abrams are an M1A2 and have what’s known as the full ‘TUSK’ (Tank Urban Survival Kit) upgrade pack. Australia plans to upgrade their armour to either Sepv3 or Sepv4 specifications, which include upgrades to weapon systems, optics and protection systems.

What would you do to let off steam?

On deployment you usually watch movies, go to the gym several times a day, and sleep when not required for work. One of the most important things for infantry to bring on a deployment is a portable hard-drive! A lot of people might not realise it, but being deployed is 99% boredom, 1% holy f**k, so it’s important to keep the mind and body occupied during the quiet periods.

What weapon or piece of equipment did you like the most?

84mm Carl Gustaf recoilless rifle (it’s not a rocket launcher). Made by Saab Bofors Dynamics, it looks like a rocket launcher but is mechanically very different, as the energy comes out of the back of the barrel, rather than the round being propelled by an actual rocket. The reason I like it so much is when you fire it, you get this massive concussion wave rocking through your body that feels amazing. Imagine getting punched on either side of the head with boxing gloves at the same time. Awesome weapon to fire. 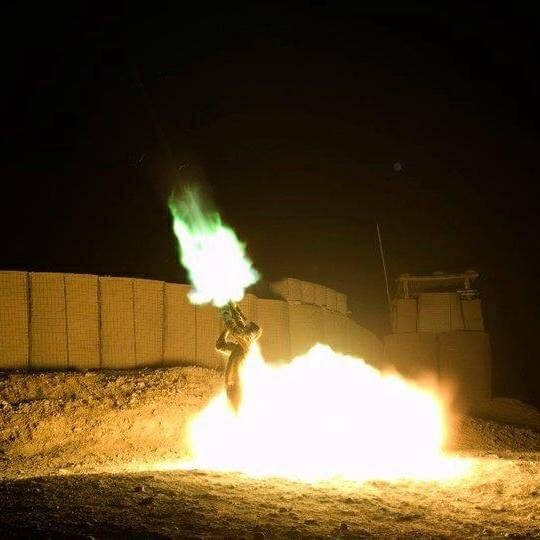 Most memorable experience from your service?

Probably the first time I flew on a Blackhawk helicopter. It was around 10pm at night and I was on QRF in Dili, Timor Leste. We had to quickly deploy to a village in the mountains to provide security to a town; I was sitting in the door with night vision on and my legs hanging out the side looking down at the countryside, and we were doing around 200+ km/h to quickly get there. It was an unreal experience, although my legs where frozen solid by the end.

What achievement or medal are you most proud of and why?

Easily the Infantry Combat Badge; it sits above all other medals and denotes that I served in a warlike operation for a minimum of 90 days as an infanteer. It’s seen as the crème de la crème, and because of that you’ll see guys on ANZAC day who won’t even wear their medals; they’ll just wear their ICB, because that’s all you need to show. You don’t need to wear your medals, because you were in a warlike operation. 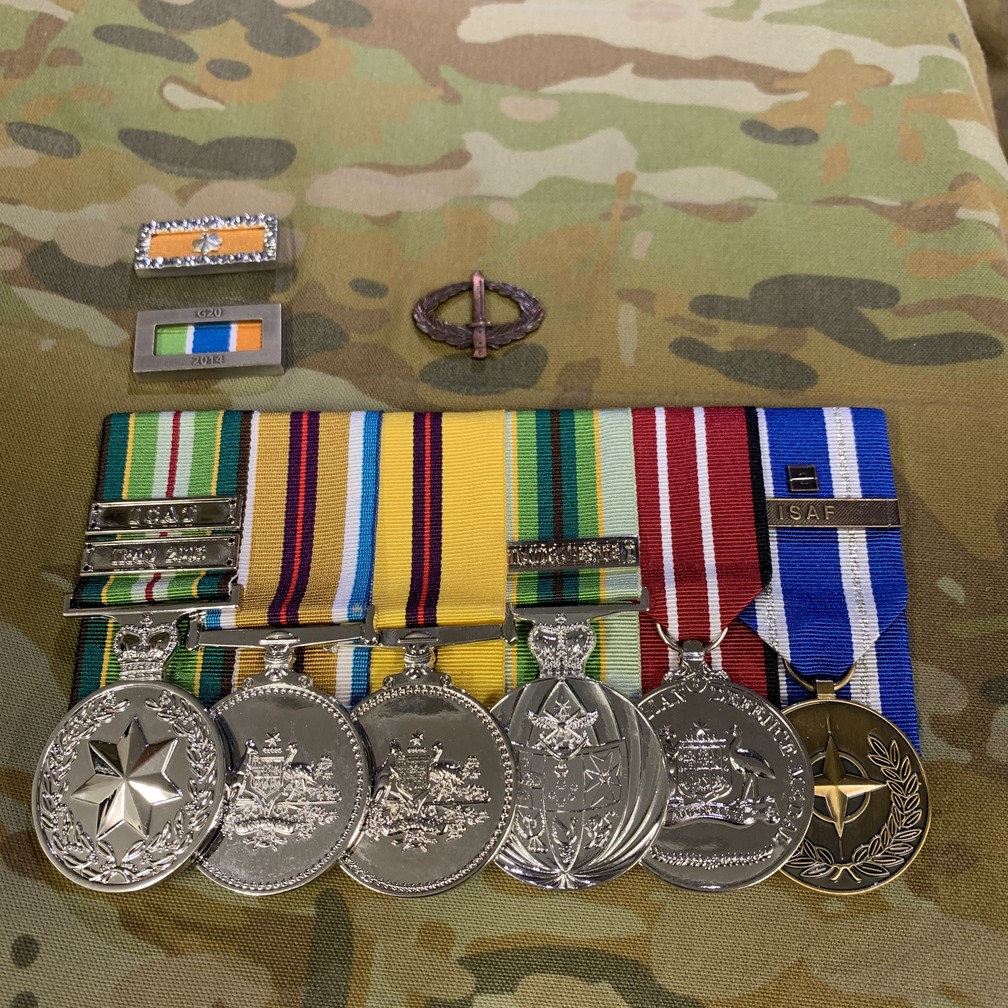 I am lucky to have the support of an amazing wife and children who supported my transition out of the ADF. Leaving defence is a daunting experience and can be very stressful, I was fortunate enough to translate my skills I obtained in the army into a job that allowed me to continue the work I was passionate about.

Have you or service men/women close to you struggled with mental health following your service?

Many veterans struggle both physically and mentally after leaving defence. I have had health issues after leaving defence associated with my service; however, veterans react differently to stressful situations individually, and I have seen friends affected by PTSD as a result of their service.

A longstanding challenge is getting vets to speak openly about their experiences. The statistic for veteran suicides has skyrocketed in the past 20 years, but I think that’s due to generations today openly talking about their experiences and therefore more cases are being recorded, as opposed to those returning from Vietnam where the culture was to ‘not be soft’. Even so, today you must do a post-psych interview after every deployment, but nobody ever tells the truth in those things. Because if you tell the psych that you’re suffering you immediately get med-downgraded and you’re not allowed to hold a weapon, drive a vehicle, effectively do your job. That’s changed in recent years, but it has taken a very long time.

If so, what have you found to be the most helpful aspects of your rehabilitation into post-service life?

Seeking help as soon as you experience issues is the most helpful thing a veteran can do, whether that be talking to a mate, or seeking professional medical treatment. It’s not typically the army or the government that will help you, but keeping in contact with your former platoon mates and making sure you check in with them is super important.

Was your interest in World of Tanks inspired by your service or purely based on the game itself?

A bit of both – I have always enjoyed armour, and the game was challenging for me, which was right up my alley. In 2012, on my birthday actually, an FPS clan I’d been playing with convinced me to come play Clan Wars with them. My first game in World of Tanks was in a Lowe on Mountain Pass – it was an awful match and we lost, but one of the clan members was a unicum and a former veteran. He was in 3RAR and I was in 6RAR, so we bonded over that and he kind of took me under his wing, and it all started from there.

This article is dedicated to the fellow servicemen of Bolagnaise who lost their lives during active deployment: