From 26 August to 16 September, World of Tanks will host a large-scale Battle Royale game event called Steel Hunter. This is one of the most unusual and compelling modes we've created to date, with heaps of rewards and brand-new core gameplay mechanics.

Fear of the unknown, the atmosphere of suspense, and constant danger are also enhanced by the soundtrack. Musical compositions in the mode reinforce the feeling of a furious chase in which it's unclear whether you are the hunter or the prey. Energetic and instantly memorable melodies encourage you to constantly be in motion and not stop for a second.

We’re sure you'll enjoy it, so read on for all the details of this event!

In Steel Hunter, it's every tanker for themselves! The battles involve 20 (when playing in solo mode) or 21 (when playing in a Platoon of three) players. Your main goal is to survive at all costs, while looting spawned items and escaping Danger Zones in a timely fashion. At the end of the battle, there should be only one Commander or one victorious Platoon left on the battlefield.

How Can I Start Playing?

1. Enter the Steel Hunter Garage through the drop-down menu to the right of the “Battle” button.

2. Alternatively, you can also click on the Festival diorama in your Garage. Clicking on it will take you to the Steel Hunter Garage, where you can choose a tank and click “Battle!” to proceed.

3. Don't want to face all those enemies alone? Create a special Platoon of 3 players, choose a unique vehicle and roll out!

When the mode becomes available on 26 August, you will find three special vehicles to choose from in the Steel Hunter Garage: one from the USA, one from Germany, and one from the USSR. You cannot mount any additional equipment on or customize these tanks. Select a vehicle and click the “Battle” button to start your exciting combat journey!

Upgrading Your Vehicle in Battle

Each of the three available tanks can be upgraded from Tier I to Tier VIII during battle. To improve your tank, you need to earn Battle XP by looting and damaging/destroying enemies. For each vehicle, a unique tree of modules is available.

Once you have enough Battle XP, you can upgrade your tank. Each level offers one of two modules to choose from. They change the characteristics and appearance of the tank right in the middle of the battle. Despite the Tech Tree being pretty simple, it offers a meaningful choice between vehicles with different play styles each time you upgrade, so check it out.

Select a vehicle and configuration

This content is available at a higher browser width.

Your Garage displays a diagram of your tank's weak spots. When an enemy hits these spots, your chance of receiving critical damage is much higher than in Random Battles.

Your Crew is tied to the vehicle and locked, so you cannot send them to the Barracks, dismiss or change the composition of their perks. They do not receive Crew EXP, but they do have a fixed set of the following perks unified across all machines:

It’s impossible to injure the crew members of your vehicle — First Aid kits are not used in this mode.

To upgrade your vehicle, you also need to look for items and special stationary loot points on the map. The loot you collect at these points may contain Battle XP, shells, and consumables.

In total, there are 4 types of loot available:

The system of visibility in the Steel Hunter mode is brand-new in World of Tanks and based on the principle of cones of visibility. Enemy vehicles become visible only when they appear in your visibility sector, as depicted on the mini-map. 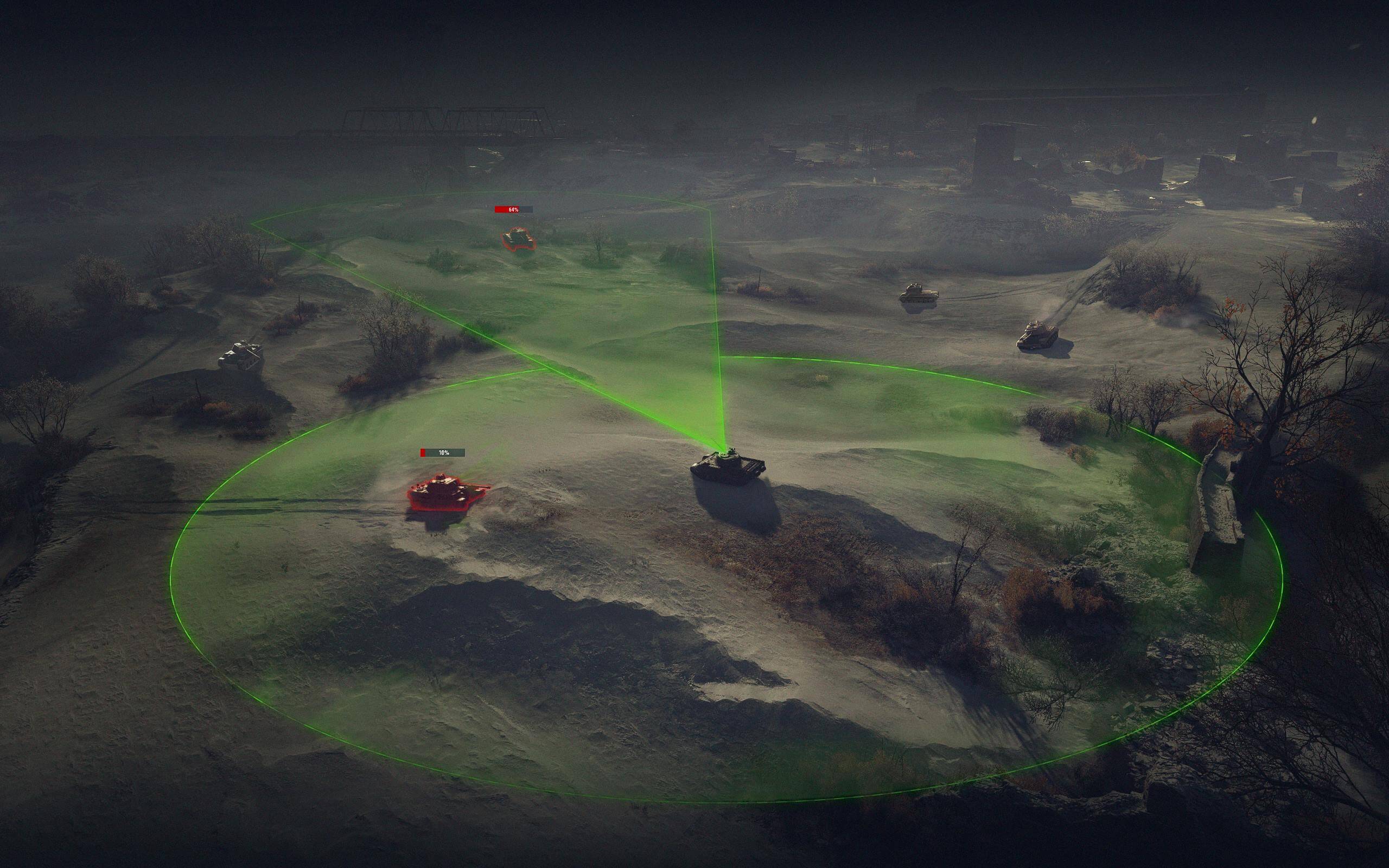 But if the enemy is within 50 meters of you, it will automatically become visible, as in all other regular modes of World of Tanks. By improving tank modules, you can enlarge your visibility sector.

By default, all players will have the Sixth Sense perk, but its activation doesn't mean that you will be able to detect the enemy — it needs to be exactly in your visibility sector to become visible.

Battles will unfold on a huge city map called Dreamland, which shrinks with time, leaving less space to play and to survive. The total battle time is 15 minutes. Before the battle, you can choose which sector of the map you will respawn in.

Also on the map will be the so-called Danger Zones — deadly, dangerous locations. If you are inside one, and the Zone turns orange, it means that it will close soon, and you need to get out of it as soon as possible. Once closed, the Danger Zone turns red, and a countdown timer appears. When the countdown expires, your tank will be continuously damaged until it is destroyed. 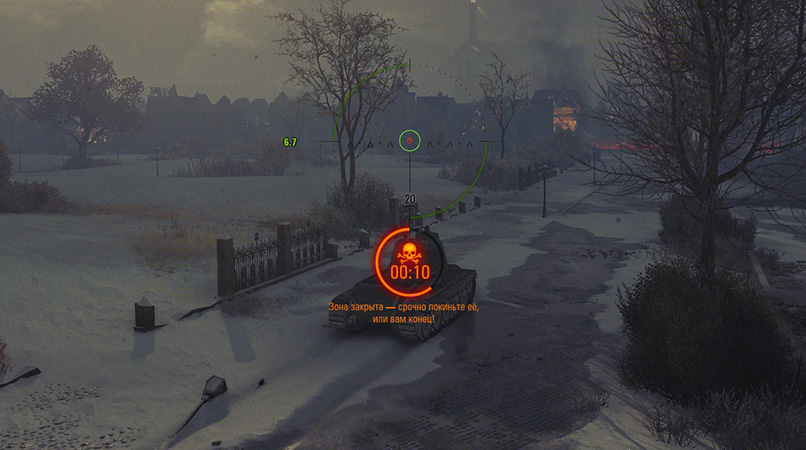 In red zones, your vehicle will lose hit points gradually. You will have very little time to leave the red zone. 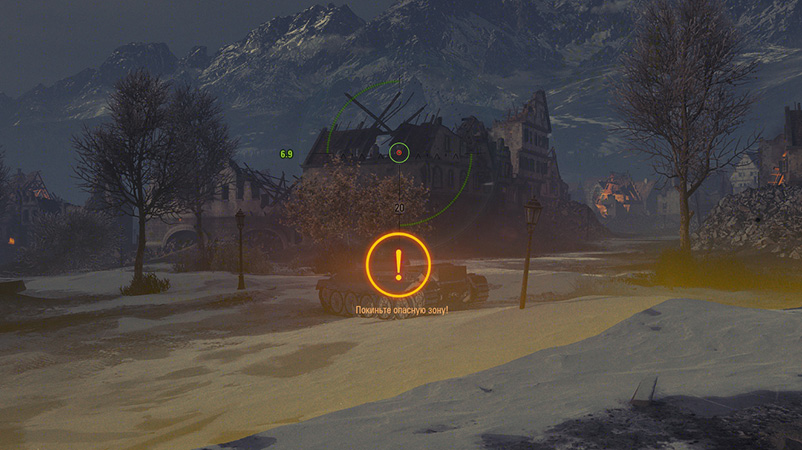 Your vehicle receives no damage in yellow zones, but remember they can close at any moment. Be ready to retreat! 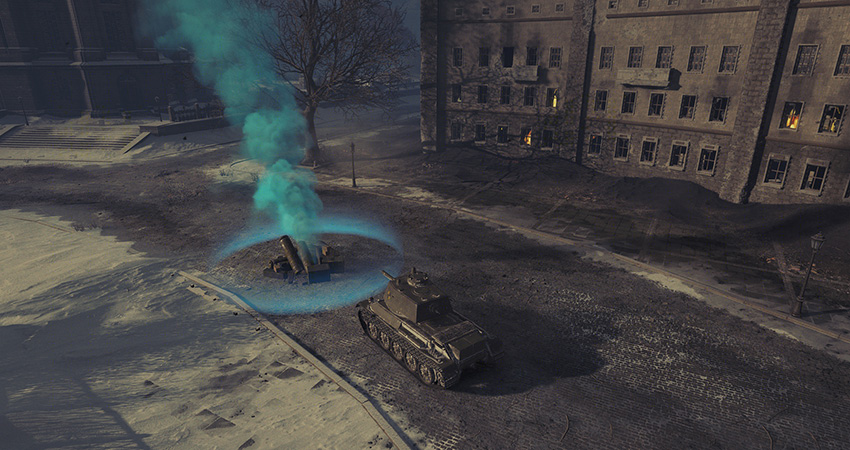 When you collect an Airdrop, you gain a considerable advantage over enemy vehicles. An Airdrop represents the biggest package with consumables and experience. But remember that all hunters see the location of the Airdrop on their minimaps. 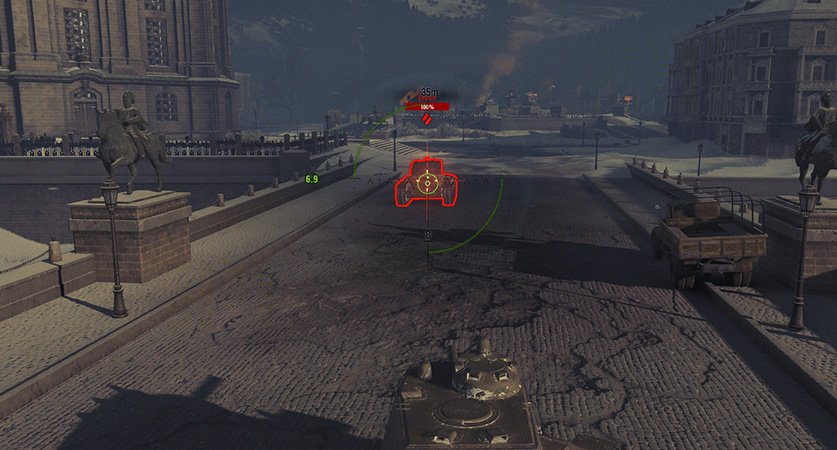 Enemy in your Vision Cone

Another hunter is in your Vision Cone! You cannot see enemy vehicles, Spoils of War, or Airdrops that are outside your vehicle's Vision Cone. 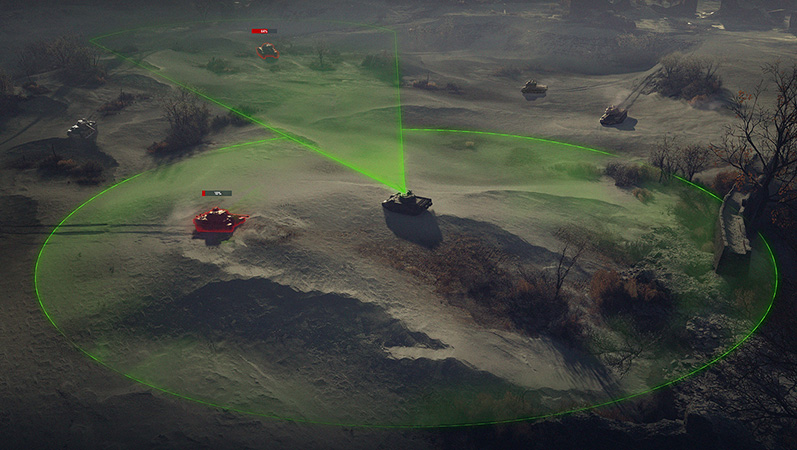 You can only detect vehicles that are within the view range of your vehicle's Vision Cone, which extends from the front of your turret.

When you collect an Airdrop, you gain a considerable advantage over enemy vehicles. An Airdrop represents the biggest package with consumables and experience. But remember that all hunters see the location of the Airdrop on their minimaps. 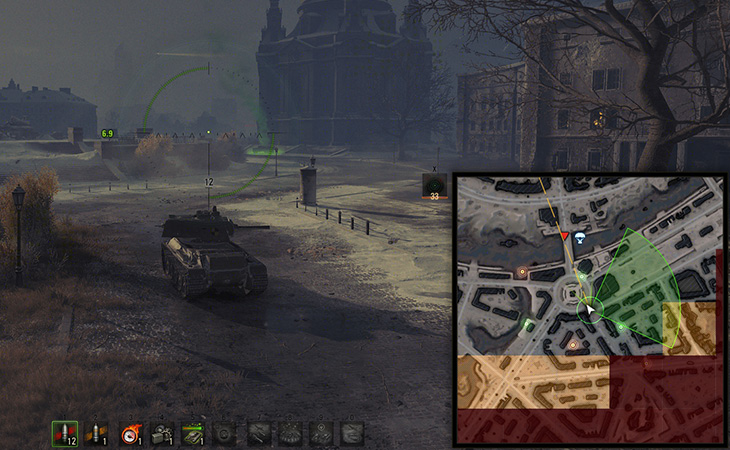 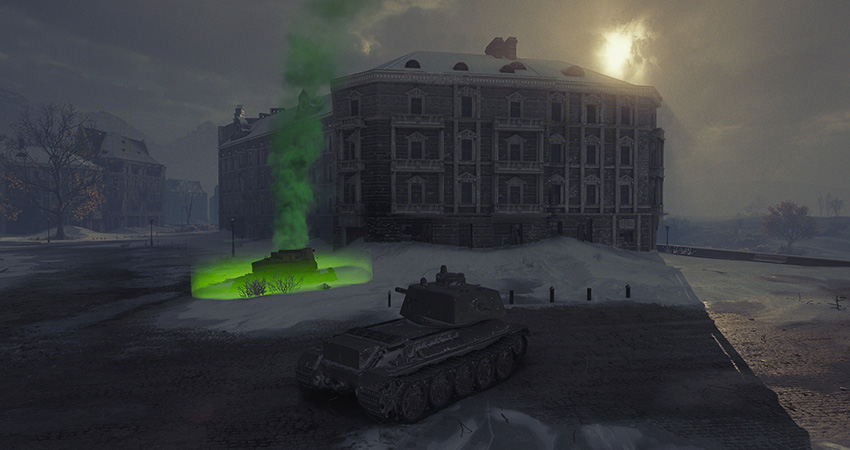 This Loot package contains experience, random consumables, and Recovery. It does not contain shells. 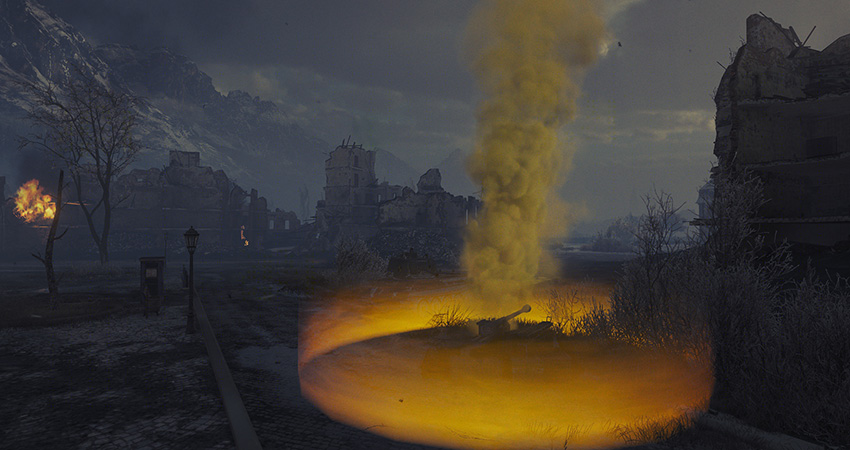 By collecting Loot of this kind, you receive experience, shells, and Recovery. The map provides plenty of these Loot packages, and they can be very useful at the beginning of a battle when your vehicle is at the starting tier.

By collecting Loot of this kind, you receive experience, shells, and Recovery. The map provides plenty of these Loot packages, and they can be very useful at the beginning of a battle when your vehicle is at the starting tier.

This Loot package contains experience, random consumables, and Recovery. It does not contain shells.

Radio Detection. This system allows you to detect enemy vehicles and valuable items on the minimap. Note: When using detection, you are automatically displayed on the minimap and remain visible to all other players inside the detection radius. Click on the icon to the left to try it out!

Radio Detection is an exclusive tactical mechanic displaying stationary loot points, as well as enemy tanks, on the mini-map. It is activated manually using the "Lock Hull / Switch Mode key ("X" by default). But beware, using Radio Detection will instantly reveal your current position on the mini-map at the time of activation to all players within the detection radius too.

Your position isn’t updated over time and is visible to opponents only at the time of activation, and the detection radius depends on your vehicle’s starting characteristics and the choice of modules in the research process. So use Radio Detection wisely and plan your actions a few paces ahead!

4 unique types of consumables are available:

The ammunition loadout of your tank at the start of the event (for Tier I vehicles) will consist of 8 shells, 1 Repair Kit, 1 Turbocharger, and 1 Recovery consumable.

In addition to consumables, you can activate global Abilities, including:

The event’s progression is based on the system of Ranks. All in all, there are 25 Ranks available. When you reach the 25th and final rank, you will receive special rewards — a medal and unique Badge, Bonds and Credits, a 2D style, and WoT Premium Account time. 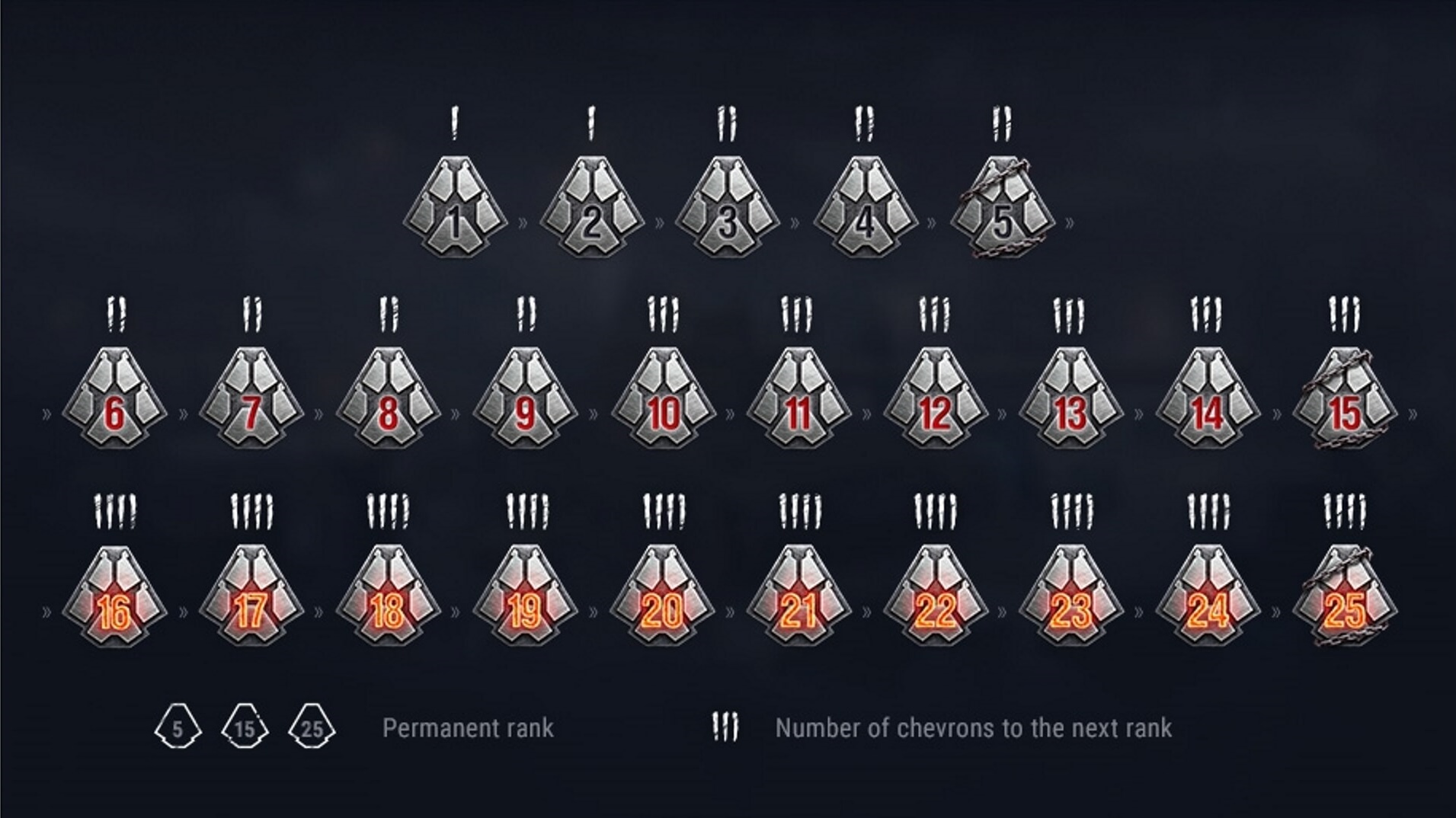 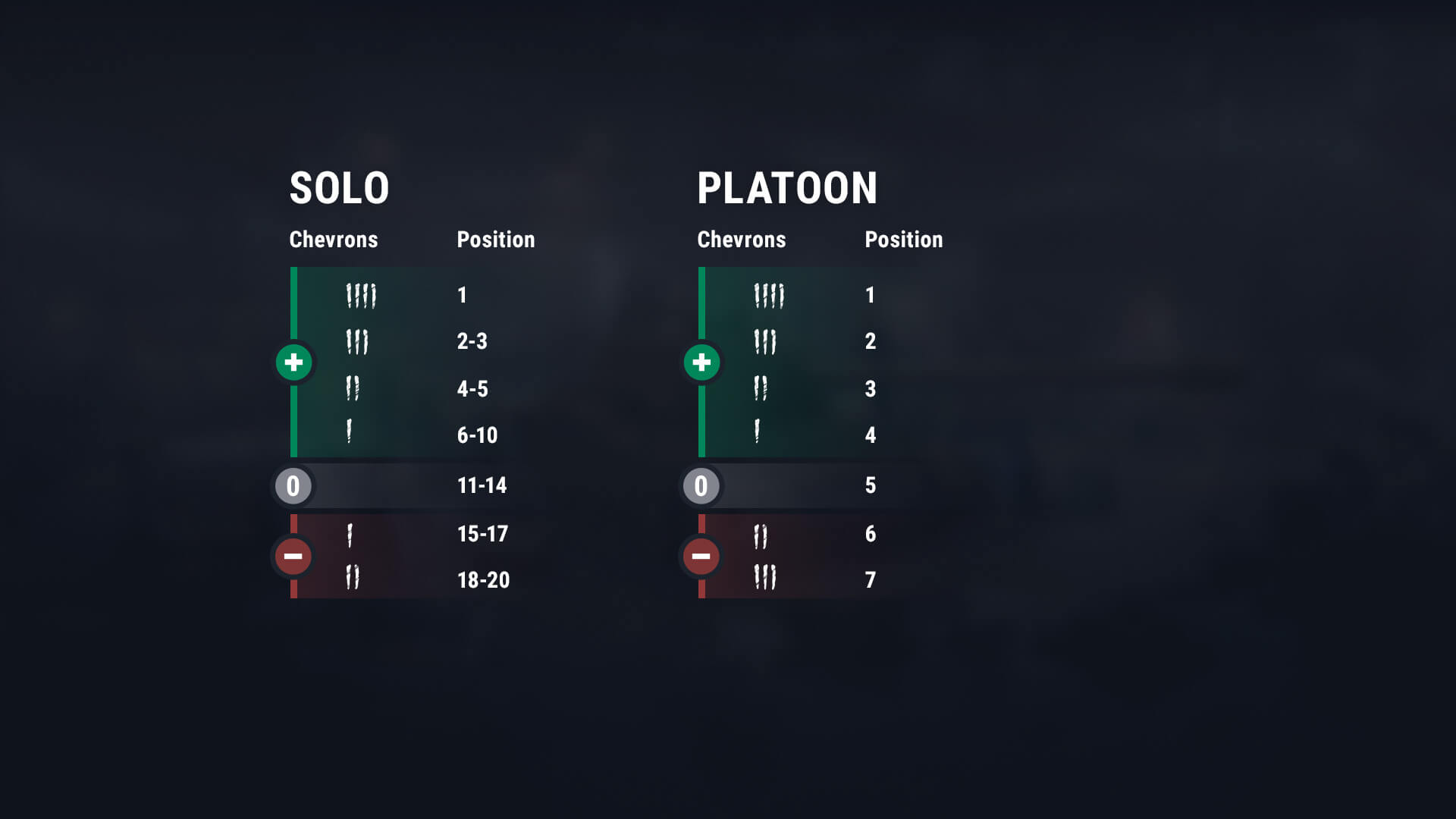 Achieving each Rank brings you rewards, including:

In addition, having reached Ranks 15 and 25, you will be rewarded you with two unique 2D styles:

You will only be able to earn the rewards for achieving each Rank once.

Want to catch your favourite streamers battling it out in this new mode? On 7 September, our World of Tanks APAC Community Contributors will be platooning with other streamers in a special competition, where they will each attempt to become King of the Steel Hunters (and win awesome prizes for themselves and their viewers).

Further details will be shared soon, so look out for it!

Stock up on ammo and rework your loadouts, Commanders! It's time to battle for supremacy!