Apply to participate in Sandbox testing!

Sandbox is a limited-access server for testing new balance prototypes in World of Tanks. Through the use of this tool, we plan to test and refine new balance changes. From the data we gather from such testing, we will select the most relevant implementations that meet specific requirements, and which are approved by our game community.

NOTE! Access to the test server can be terminated or restricted at any time for non-compliance with the EULA and Terms of Service.

In particular, pursuant to paragraph 17 "Beta Tests" of Terms of Service, “the beta games, including information about features and functionality to be offered as part of the games, are confidential.” Any information sharing from Sandbox server (live broadcasts, video reports, etc.) is prohibited without coordinating it with Wargaming representatives. You can request consent for publication of such materials in this special thread on the Sandbox forum.

In the first iterations, the focus will be on testing Tier X vehicles. Approved solutions will be applied to vehicles of lower tiers as well.

We do not guarantee the implementation of changes-in-testing on any final versions of World of Tanks. The final implementation(s) will be made depending on the information collected and analysed.

In implementing new vehicle balance changes in WoT, we aim to:

Features of the Sandbox Test Server

On this first iteration of the Sandbox test server, players will have access to the following:

Note! Players will not be able to purchase premium shells for game credits in the Sandbox test server.

The following vehicles will be available on the Sandbox test server:

Description of Main Changes to be Tested

Some of the main game mechanics will be changed on the Sandbox test server in order to achieve the balance goals listed above.

Changing the shot grouping within the aiming circle

In line with the goal of decreasing the range at which combat occurs, we will adjust the grouping of where shots land within the aiming circle, so as to increase the survivability of vehicles. The effects will be especially noticeable at long range; vehicles will be able to survive focused fire coming from long distance, because players will generally have to aim their shots more carefully.

A comparison of the distribution of shots between Update 9.15 and the Sandbox test server is available in the following image: 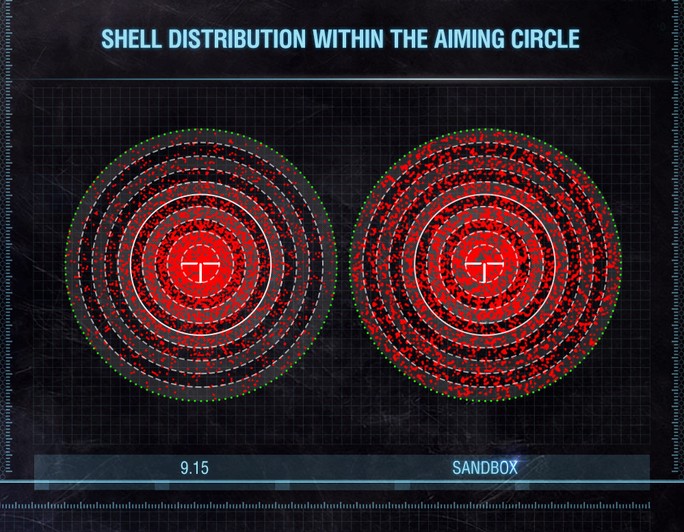 Adjustments to armour-piercing capacity at range

Under the new changes to be tested, armour-piercing capacity will decrease more significantly at long distances in order to increase the importance of armour in the game. Long-distance shots will become less effective, in order to encourage players to actively engage in close-range combat. They will have to fight more actively and make good use of manoevres to effectively fight enemy vehicles.

With these changes to armour, the chance of penetrating a vehicle from the front will be decreased at long distances. Thus, heavily-armoured vehicles will be able to head into battle without fear of being picked off easily at long range.

Currently, as of Update 9.15, players can still effectively shoot from far distance.

Initially, there were only a few guns in the game. Gradually, many high-calibre guns were introduced. For this reason, the guns should be reworked. Within the Sandbox feature, we plan to test a new system of distributing damage per shot for different guns. The goals of the new system are to decrease the risk of being destroyed with one shot and also to increase the importance of a gun's damage per minute.

Because we plan to increase vehicle survivability in battle, fast vehicles featuring poor armor will also be improved. We will explore the relationships between suspension speeds and turret traverse speeds for each vehicle type within the class and role systems. Fast vehicles will be able to use different manoeuvres to outflank slower, heavily-armoured vehicles.

The improvements listed above are intended to diversify the ways by which vehicles can be used, while ensuring that they function in accordance with their intended roles. Seven in-game archetypes have been distinguished based on expert evaluation:

In general, the focus will be on reduction of Manoeuvrability and View Range, which contributes to role-based gameplay.

These changes are not final and may be altered in future depending on the feedback from the game community participating in the test and the results of statistical analysis.

When rebalanced, SPGs will play a new role. Instead of being damage dealers, they will become support vehicles. In addition, SPGs will receive some new features:

Changes will be made to HE shells as well: