Ranked Battles 2nd Season has begun! Now is your chance to fight to prove your worth and cement a position on the Season Leaders list. Lead your team to victory through a stellar performance and climb the ranks to earn the envy of your fellow tankers, winning Bonds and other valuable rewards along the way! Bring your best Tier X game to the frontlines because the competition is going to be both fierce and rewarding.

Get ready to fight your way to the top of the leaderboard! Ranked Battles return in a matter of weeks, and so does your chance to get your name out there, secure a place among the Season Leaders, and snatch loads of rewards. The mode went through an overhaul following your input from the first round of testing, and today we’re highlighting changes to get you up to speed.

For the 2nd Beta, we re-examined the rank system, matchmaking rules, and overall setup to ensure the highest standings go to those who earned them by showing great performances, week in, week out. Claiming a stake will be more challenging this time round, and, as the playing field leveled, so did the rewards!

Ranked Battles underwent significant changes after the 1st Beta Season. We acted upon the majority of requests and will continue making adjustments to the mode based on what is happening in the community. We genuinely hope that the revised setup will ultimately make the experience better, but we also realize that not everything may work out and garner the type of response we’re hoping for. That’s why we’re once again calling on all of you to work with us as we continue fine-tuning the mode. Hit the forum to share your thoughts on the 2nd Beta Season! It will help us understand how the tweaks are performing, the impact of the interplay between them, and if there are any other areas for improvement.

Over the 1st Beta, we were amazed by the performance and perseverance of top players. The sheer intensity of competition was astounding! Most importantly, we received a lot of feedback from our community and collected a substantial sample of stats. With your help, we learned what the mode needs to thrive, changes that need to be made, and how to better organize seasons to deliver a truly enjoyable experience for all willing to test their mettle. Here’s a detailed look at the improvements you made a direct impact on.

Stretching the season over four stages undermined the fun factor. Ranked Battles aren’t a marathon. Each season is designed more like an intense sprint where you’re to show your worth over a short distance. Four weeks are way too long for a “sprint.” To liven up the experience, we shrank a season to three seven-day stages.

The initial chevron earning mechanic blurred the very idea behind Ranked Battle, which showed during the 1st Beta Season. We wanted to build the mode around a great individual contribution that leads to victory. At the same time, we didn’t want the lack of team effort to drag you down. That’s why we gave chevrons to the top 3 players on the losing team. Seems fair. Upon a closer look, however, this proved to downgrade the value of victory, which is the primary goal of any battle, regardless of game mode. It also somewhat streamlined progression through ranks, making the entire fight for Rank V a lesser challenge. We revised the rules to put victory back at the core of it and ramp up the challenge.

Earning chevrons in the 2nd Season: 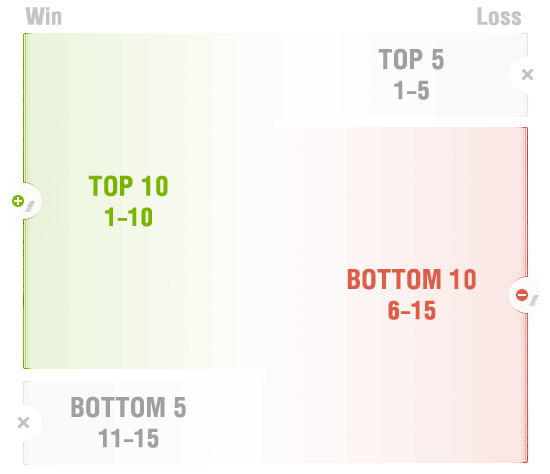 These changes promote tighter teamplay as a great individual performance alone won’t always grant you a chevron. Yet it most definitely will take you further when combined with well-coordinated team play. One more important issue this should fix is the unfortunate trend we saw during last season. Turned off by poor team performance, many would stop playing along and focus on generating great stats instead, which often harmed the team and kept it from winning.

Climbing up to Rank V did not provide a real challenge to experienced players. Tweaking the way chevrons are earned won’t solve it, so we went further and changed the mechanics behind earning ranks, revising the number of chevrons it takes to level up a rank:

Personal ranks: 1-3-5-7-9. You need one chevron to kick-start your ascension, but as you progress, the difficulty grows, too. Leveling to Rank III takes 5 chevrons, Rank IV requires 7, and making it to Rank V costs 9 chevrons. The number of ranks remains the same.

Vehicle ranks: Now you need 5 chevrons to get to the next one regardless of the rank your vehicle is at.

What we’re trying to build is a rank system that mirrors combat efficiency: making it to Rank V takes skill and a lot of effort. The top standings in the Season Leaders list singles out tankers who have been crushing it from day one through to the end.

The way teams are assembled was enhanced to provide for a more enjoyable experience and ensure both sides have equal chances at victory:

Vehicle types: No more guessing the result the second you see makeups. The matchmaker now balances teams by the number of medium and heavy tanks. It should leave the battle outcome to player mastery and team play, undeterred by uneven vehicle composition, leaving victory squarely in the hands of you and your team mates.

SPGs: As the 1st Season was coming to an end, almost every battle had three arties per team. We saw reports come in from the Ranked Battle frontlines to the forums, arguing that it disturbs the experience. The data we gathered proved it to be true. So we reviewed the SPG limit, setting it at the maximum of two units per team.

Map rotation: To clamp down on the number of map dupes, we revised map selection and tweaked the very mechanic behind it. Maps that proved unsuitable for Ranked Battles gameplay were removed to improve the overall experience.

We received invaluable feedback on the reward system and economy. For the 2nd Season, Ranked Battles offer new ways to boost your earnings, while revised stage rewards let you earn more Bonds without waiting for the season’s end.

Like last season, the final leaderboard is split into three prize leagues:

The lower 50% of the leaderboard don’t make into the prize leagues, but it doesn’t stop them from earning Bonds and stage rewards along the way.

At the end of the day, Ranked Battles are all about healthy competition that rewards those who excel individually and channel their efforts to lead the team to victory. To better define the most efficient method out there, we reexamined the criteria for entering the Season Leaders list. This time round, to secure a place among the best, players should earn a certain number of Rank Points throughout the season:

The countdown to the 2nd Season has begun, and we hope you’re as excited as we are. Now that you know what the mode’s about, it’s time to refresh your Tier X skill and come prepared for the season’s start. Let’s get to it!