Let’s play fair – be a good teammate, and a worthy opponent. Approximately 1,000 accounts have been banned for poor in-game etiquette.

World of Tanks dev team is constantly working on improving the game to discourage unsporting behaviour. Here are the details of the new mechanisms that will be implemented.

You’re probably familiar with the unpleasant feeling when your team loses due to a teammate or two abandoning the battle for a variety of reasons. It also gets frustrating when your last opponent self-destructs when you’re just one hit away from achieving “Top Gun” or “Ace Tanker”. Such situations ruin gameplay and complaints are absolutely legitimate.

We are not talking about disconnection or urgent personal reasons – unfortunately some players regularly abuse this option and thus negatively affect the gaming experience for others. Such unsporting behaviour has been noticed and we will work hard to prevent it.

In update 9.3, we will introduce a set of mechanisms to make the game more comfortable for all.

What will happen when players leave a battle

Note: A player is rendered a leaver if he quits the battle and returns to the garage before his vehicle is destroyed.

In 9.3 we’ll introduce a system to track such “leavers”. Upon pressing the button “Back to Garage” players will receive a warning window explaining the negative consequences of the action. 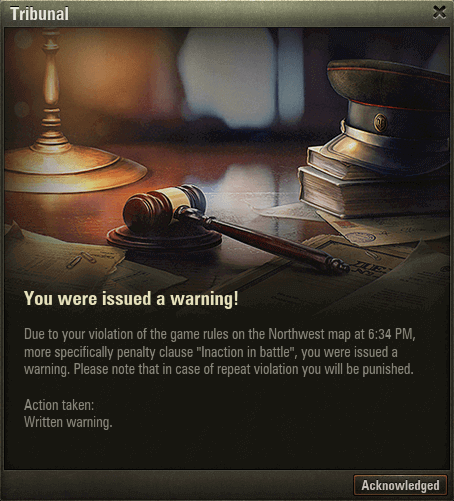 If the warning is ignored after an amount of similar violations, the player will be fined all income for the battle he left. The player will not receive any experience, credits, bonuses for missions, medals, or marks of excellence. Players will not be able to gain Industrial Resource for abandoned skirmishes.

Battle rewards will be resumed when the player participates in a battle without similar violations. However, if the player continues to violate the rules, he will be charged again.

The system will be lenient to newcomers. New players with a certain number of battles on their accounts will not be penalized for leaving battles; however, the warning message will be displayed to them as well.

Note: A player is considered AFK (Away From Keyboard) if he was mostly inactive during the battle.

In order to prevent irresponsible players from passive participation and obtaining an unfair reward for their presence, we developed an AFK prevention system. If the system detects inactive players, they will be warned about this unacceptable behaviour. In case of repetitive inactive battles, they will be charged a 100% fine for all benefits. Similar to leavers, they won’t get any experience, credits, bonuses for the missions, medals, marks of excellence, or Industrial Resource.

It is important to understand that episodic disconnects will not lead to penalties, the system will only warn players. The system will show leniency to newcomers with a certain number of battles on their accounts.

Note: Self-destruction is rather self-explanatory . For example, intentional drowning or falling off a cliff.

Some players are unwilling to continue the battle against opponents and prefer to destroy their tank themselves. Such actions are regarded as unsporting - players doing this will be warned. In case of repetitive self-destruction, players will be penalized as described above. 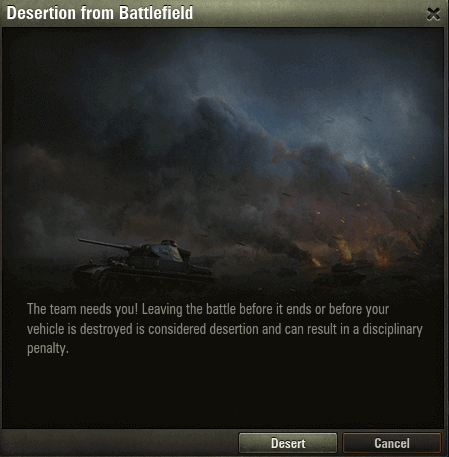 Nevertheless, we understand that there can be situations of unintentional self-destruction. If it happens rarely, the system will issue a warning only. Penalties are applied only based on regular cases.

In summary - 9.3 will feature a new system dealing with unsporting behaviour. It will focus on discouraging the following activities:

Single violation of any of these rules will result only in a warning. Penalties are applied only in cases of repetitive violations. Once fined, players will still receive benefits for the next battle, though they will get marked with a probation status for a certain period – the nickname colour change will not be visible to others and will be removed after active play without violations.

Please bear in mind: the main purpose of this system is not to implement a new fine system but to reduce unsporting behaviour. That’s why the system will issue warnings first and only fine players for repeated offences.

To learn more about the new system, you can participate in the 9.3 common tests.