In Development: Marks of Excellence

We've been hard at work on Update 9.1 for weeks now, and we're finally ready to give you a little sneak preview about what's coming up next: Marks of Excellence.

It's by no means a game-changing feature, but we think it'll be a pretty cool thing when it goes live, so read on to learn more about it and why you should care!

A short history about Marks of Excellence

Soldiers of any army in history have always attempted to show off their combat expertise, usually with a custom set of decorations that signify the number of kills they have made throughout the battles that they had participated in.

This was true as well for some tankers who served in the Second World War. For them, each mark signified a vehicle destroyed with a shot from their tank. Crews usually recorded their kills for bragging rights, although it was also utilized as an unorthodox method to determine skill levels within tank squadrons.

Nevertheless, it never received widespread adoption; the sheer volume of tanks used in battle, along with the chaos that inevitably followed made it so that few could tell whose shell delivered the killing blow with certainty.

Marks of Excellence in World of Tanks

With the release of Update 9.1, we'll be bringing Marks of Excellence into the game for all players to achieve and earn. There are three seperate ranks of Marks of Excellence available for each tank you own. To get these Marks, each player must prove that they're better than the rest before unlocking them for use. 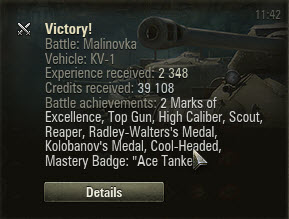 Unlike real-life however, these will not be based on the number of kills gained on the tank itself, as those are relatively easy to score. There's no point in earning the Marks if a Type 59 can get one by defeating a T1 Cunningham in a 'fair' one-on-one duel, or if a Tier III sneaks in a killing blow in a match comprised mostly of Tier VIs.

Instead, we'll be using the 'Average Damage Dealt' property to decide who's eligible for a Mark of Excellence. Unlike the number of kills gained or victories in battle, the average amount of damage inflicted by a player is directly influenced by individual skill level and not by the effectiveness of the team or platoon. Spotting damage will also be considered, which means that light tanks successfuly in scouting roles will have a much easier time earning the top ranking Mark than their peers.

Marks of Excellence for each Nation

It goes without saying that each nation's vehicles will have a different design and placement for Marks than the others. Most, if not all of the designs that we have opted for are based on research, collaboration with war historians and wartime photographs.

In the following screenshots, we'll show you just how these Marks will look like in the game.

We hope you enjoyed this little preview of what's to come. Check back often - we'll have more details on Update 9.1 soon!